We're suddenly 14 people short of a party. The family flew out of Queenstown today for Auckland and on to LA and Chi/Nashville, a long trip but they'll earn back 24 hours. We're gonna wind the trip clock back here for a guest post from Marc and Leah, with details of their all-day trek in the Redwoods Whakarewarewa Forest in Rotorua... 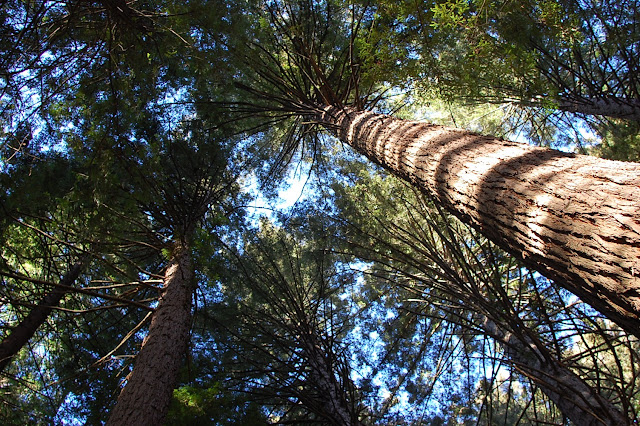 Walking among giant redwoods in any part of the world is a magical experience, and this was no exception. There's a plaque in the redwoods honoring Mary Sutherland, the world's first woman forestry graduate. Sutherland graduated from the University of North Wales in 1916 and went on to work for the NZ State Forest Service from 1923 to 1933.

The park...was originally home to over 170 tree species (a few less now), planted from 1899 to see which could be grown successfully for timber. Radiata pine proved a hit (as evident throughout NZ), but it’s the mighty Californian redwoods that give the park its grandeur today. 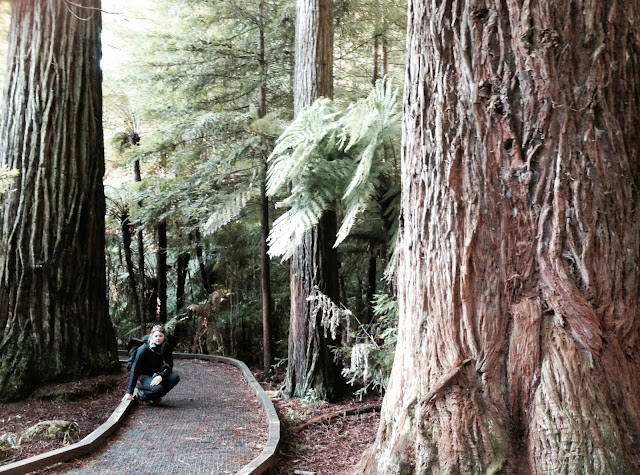 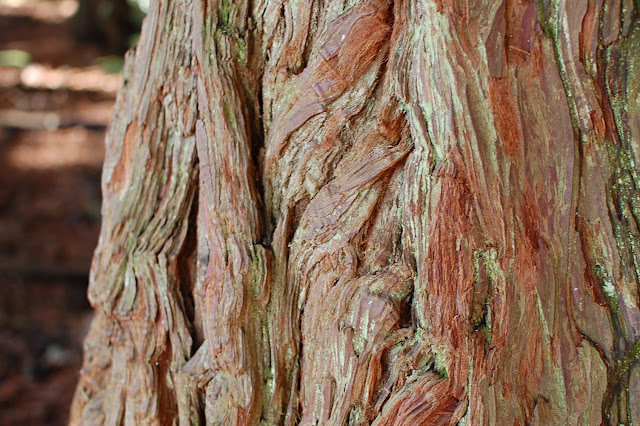 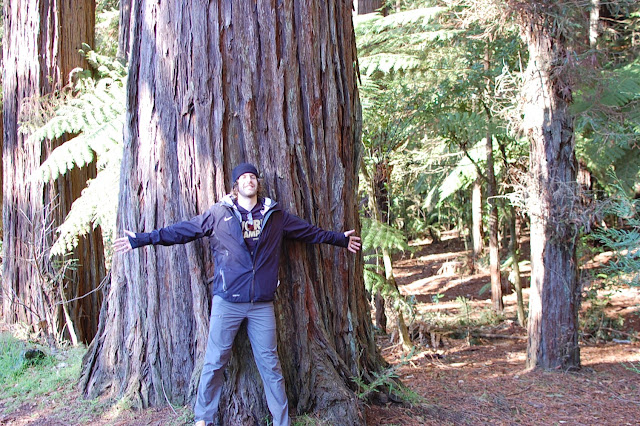 After passing through the oldest redwoods, the trails diverged and our path was eventually flanked by a significant stretch of land that was clearly in the process of deforestation.  A bit irked that the visitor center had recommended this trail without advising it was under major construction, we speculated that the forest service was doing some sort of controlled land management.  It wasn’t until we stopped at the peak of the trail and came across a man and his dog that we learned what was happening on this land. 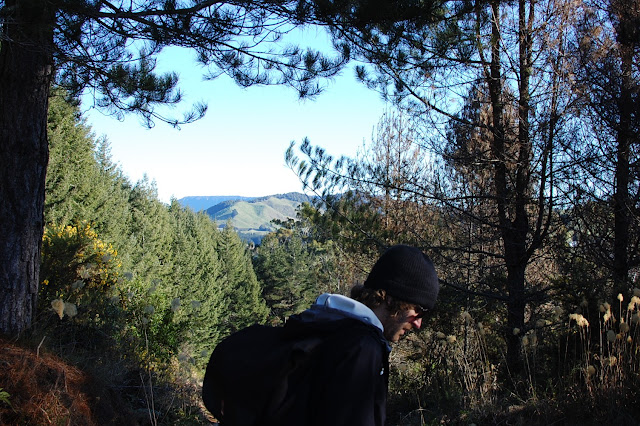 Contrary to most outdoor hiking space in the States, these lands are the result of private enterprise. Learning about the coexistence of backpacking daytrippers, hardcore mountain bike enthusiasts, and commercial logging operations was at first quite a foreign concept to grasp.  But hearing this certainly cleared up our confusion about the swath of tree stumps we viewed on the way to the peak, and in a way made us feel better about how this operation was handled. 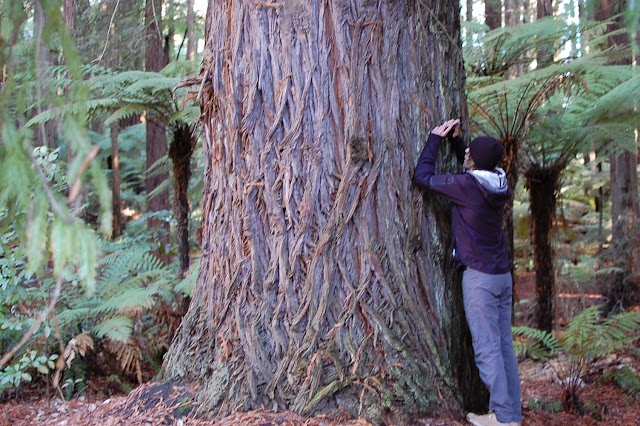 Our helpful trail companion was actually just out for a run on his lunch break – he works at the bottom of the mountain in one of the forest-related industries as an engineer (the perfect person to answer our queries!). 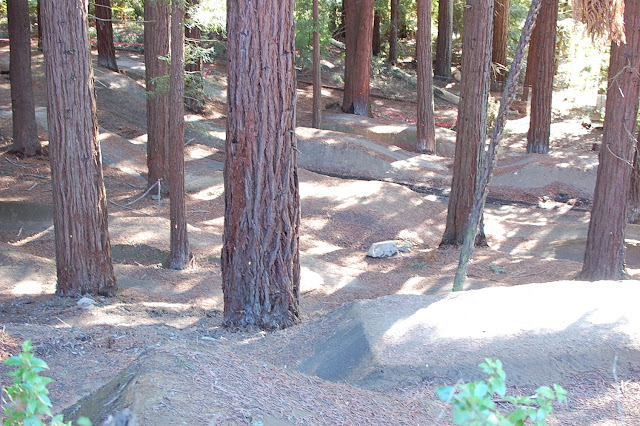 Inquiring as to what animals could likely be spotted on the remainder of our hike we were informed that no mammals are native to New Zealand except for those introduced, so very few animals besides birds exist in the area. The only thing we were likely to see was a wallaby, which usually only are spotted at dusk, or the vast variety of birds that are found in the area. 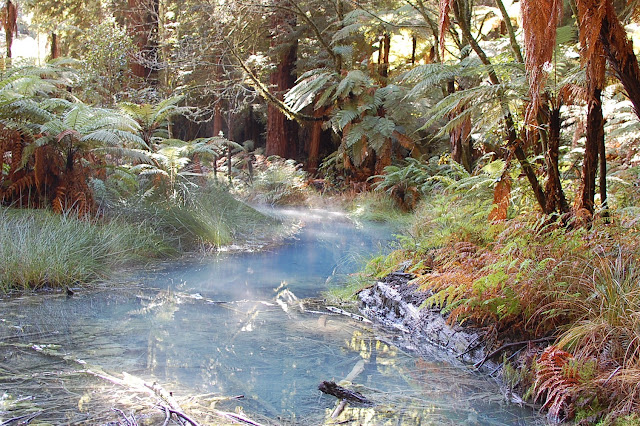 The controlled forestation of this land has several financially interested parties, including the local Maori and major investor the Harvard University pension fund. After an area is cleared, the Rotorua Mountain Bike Club has first dibs to create new trails for the abundance of riders in this area. 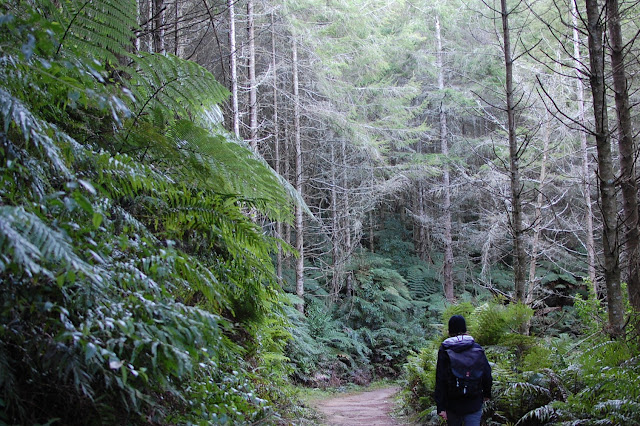 This concept of private lands open to public use was actually first introduced to us on our walk to the forest. We wandered across a disc golf course that was dotted with some impressive trees and encountered a number of folks walking dogs in the beautiful surroundings. 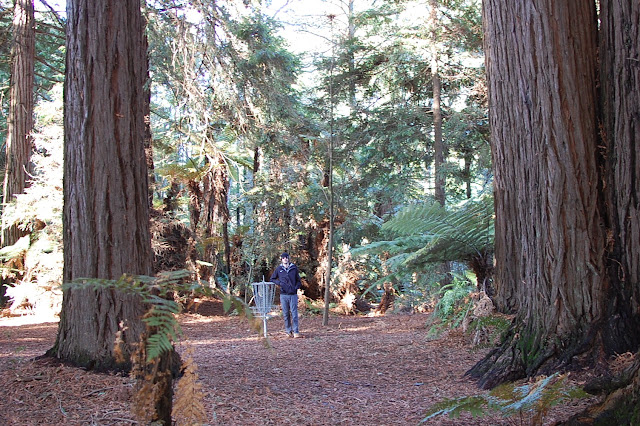 On our way across the fence line (with a seemingly authorized opening), we noticed a sign that proclaimed the land as “Private Property–Please Keep Your Dog on a Leash.”  The apparent contradiction a proof of concept that doesn’t jive with the traditional US definition of private property use.