Milnthorpe Reserve began in 1974 as an effort to establish an indigenous forest on a 400-acre coastal site. It's just a few miles from where we're camping. After two years of failing to get local plants to thrive in the impoverished soil, a trial planting of exotic trees was begun, with Australian eucalyptus and acacia proving to be most adaptable.

We set off this afternoon on a beautiful day and parked right here, heading for that path. "Do you suppose the incoming tide covers that walkway?" Art wondered aloud. 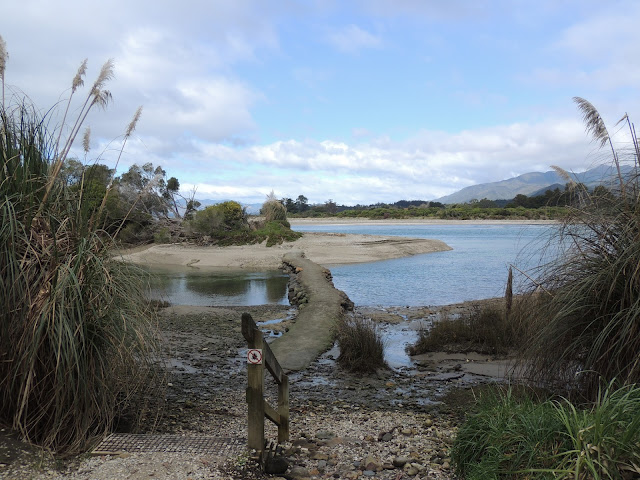 The walkway led us over the Parapara River inlet and directly to the beach. The reserve runs for miles along the beach and can be entered at any of several points. 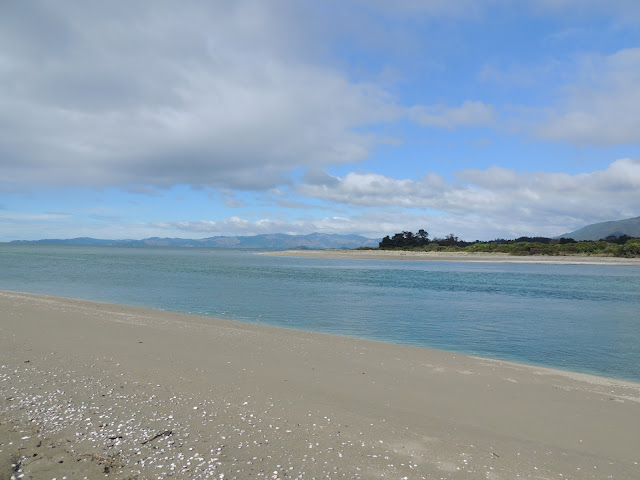 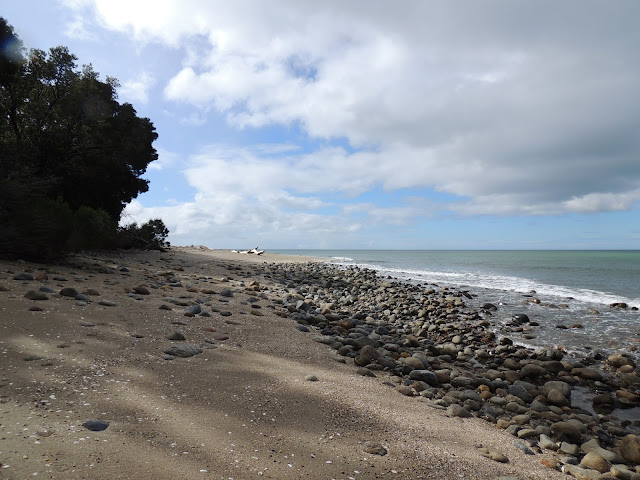 When we got closer we found this. 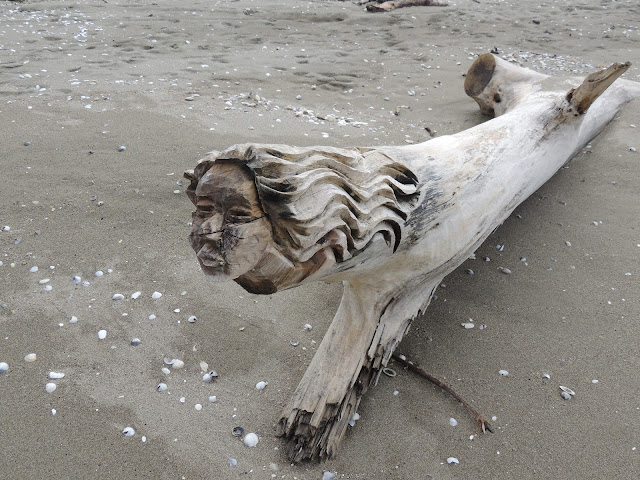 A beach reveals itself freshly with each tide, its ever-changing selection of wonders scattered about. 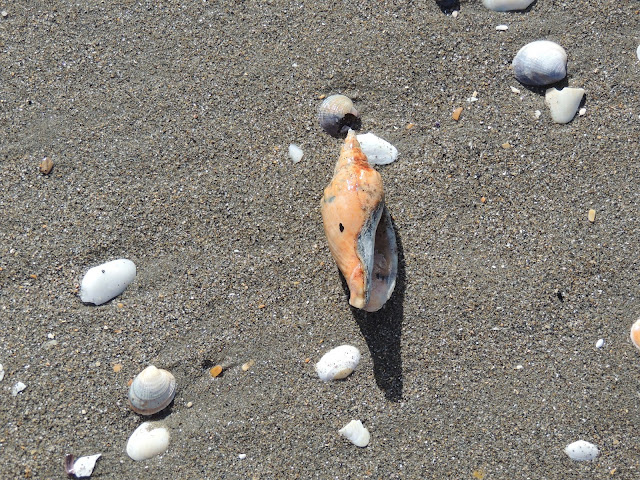 Paua shell, each one displaying an artful array of color. Read more about paua here. 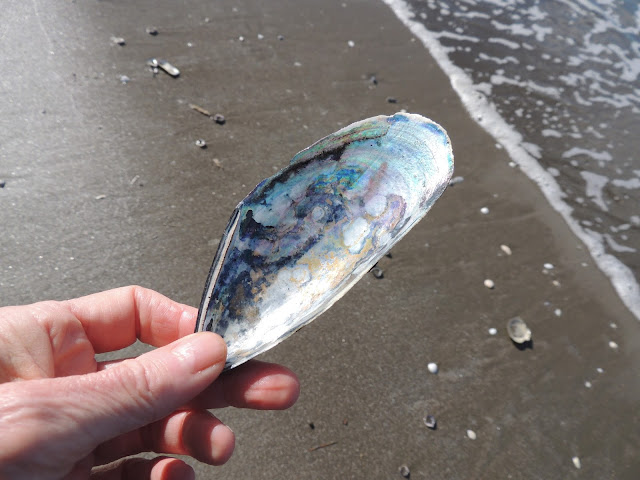 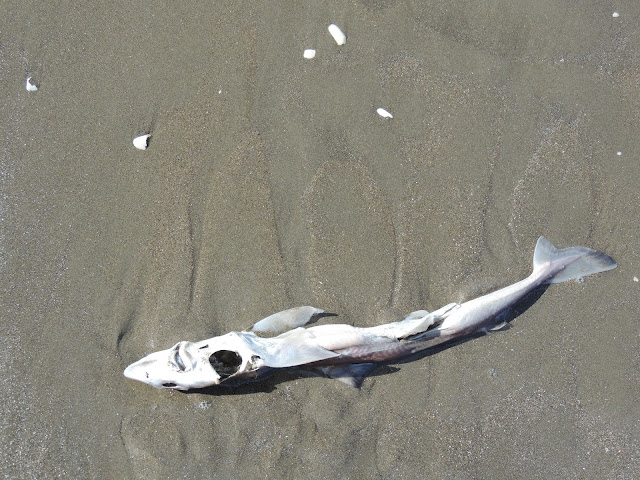 To our left is the reserve. The Australian varieties grew quickly and enriched the topsoil layers, providing a crucial shade canopy that allowed tens of thousands of native specimens to flourish. 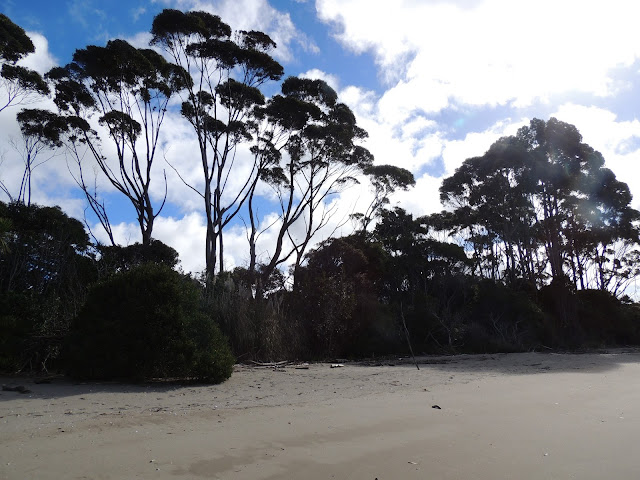 Looking back: As above, so below. The water reflects today's sky in the loveliest way. 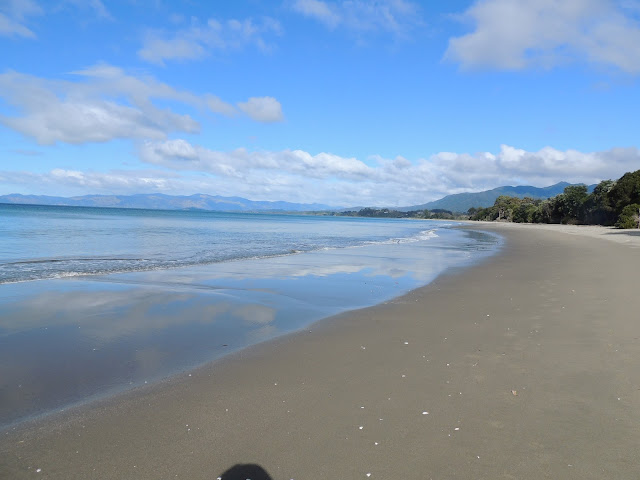 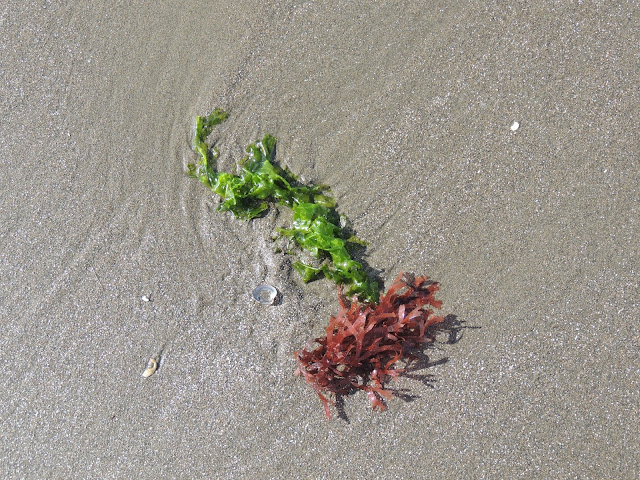 We're heading into the reserve at this point. There are miles and miles of trails and we're glad to have a map. 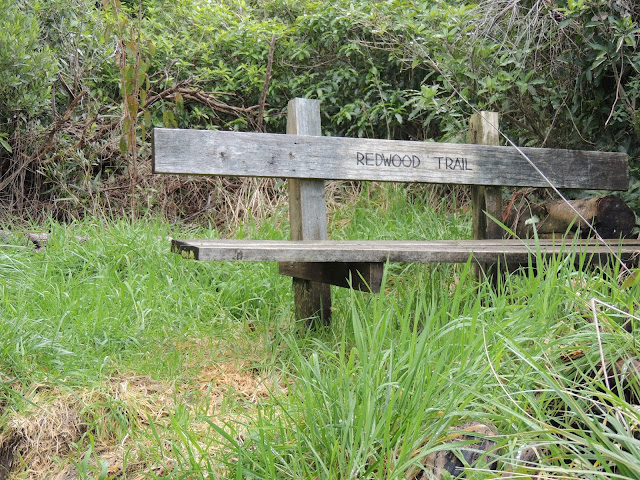 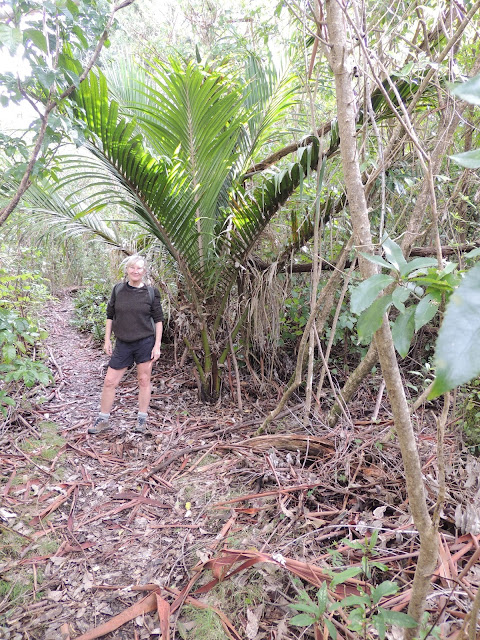 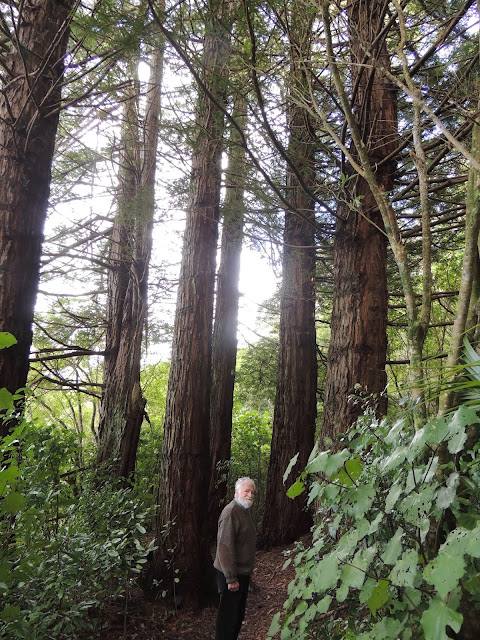 What 35 years can produce! 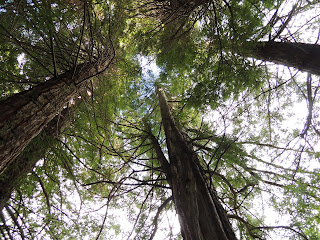 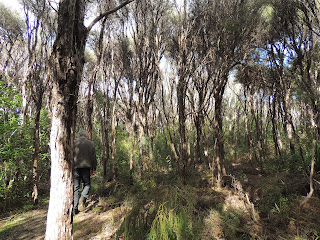 The plant diversity is astonishing, paths weaving from one grove to the next. 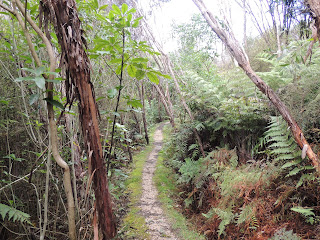 There is also occasional sculpture, carving, and other art to be stumbled upon. 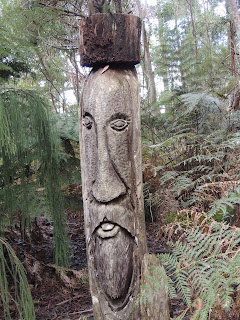 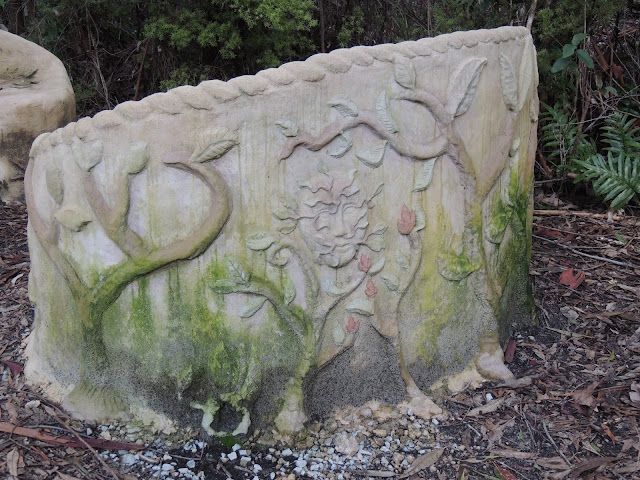 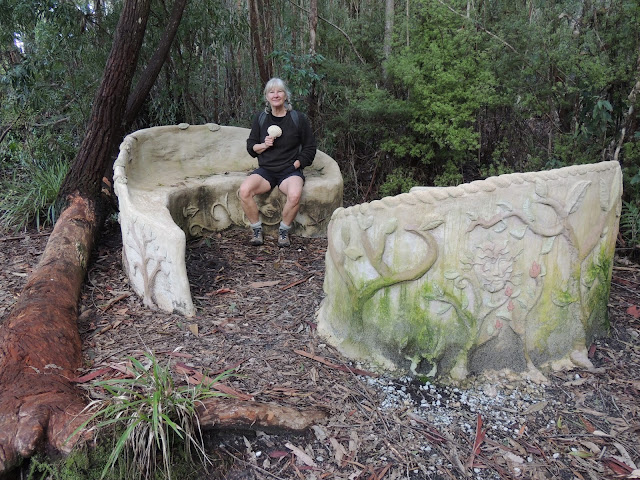 "For me, trees have always been the most penetrating preachers. I revere them when they live in tribes and families, in forests and groves. And even more I revere them when they stand alone. They are like lonely persons. Not like hermits who have stolen away out of some weakness, but like great, solitary men, like Beethoven and Nietzsche. In their highest boughs the world rustles, their roots rest in infinity; but they do not lose themselves there, they struggle with all the force of their lives for one thing only: to fulfill themselves according to their own laws, to build up their own form, to represent themselves. Nothing is holier, nothing is more exemplary than a beautiful, strong tree." 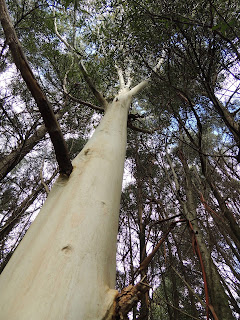 We came upon a wetland environment on a circular body of water. 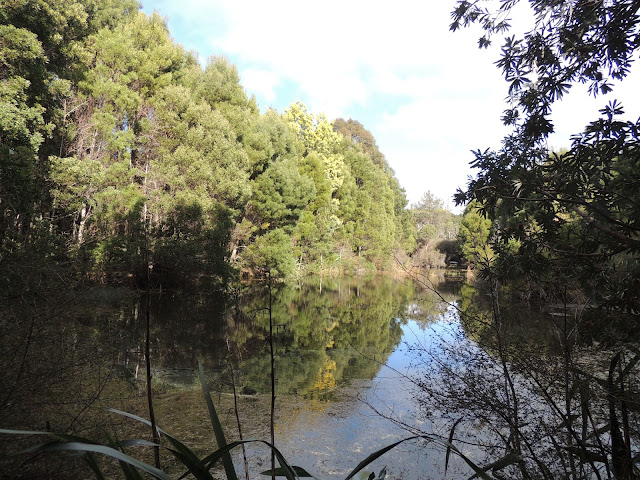 It even has an intriguing island. 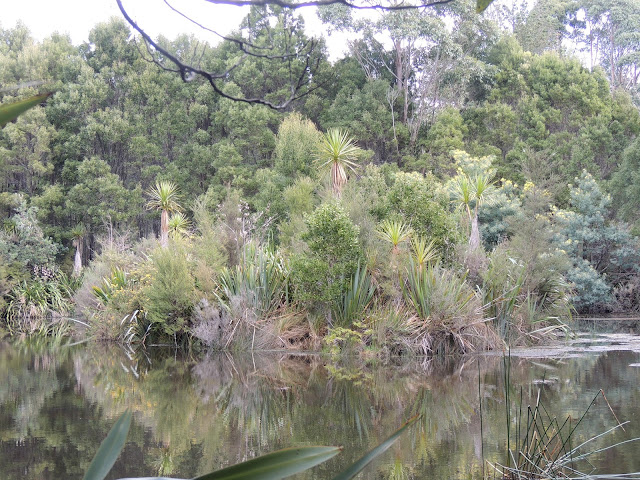 This is the best of both worlds--beach walking and woods tromping. We decide to take one of the offshoot paths back toward the beach and head back the way we came, here crossing a bridge over the inlet water. 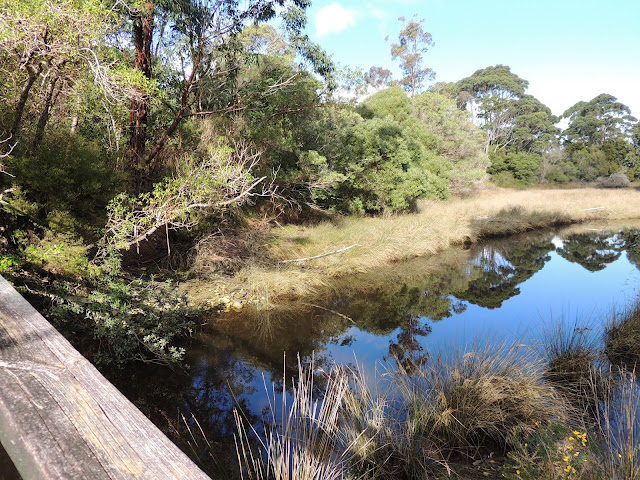 We're both pretty tired by now, coming up on maybe six miles and ready for a coffee. This picture shows a portion of the arc of Golden Bay. 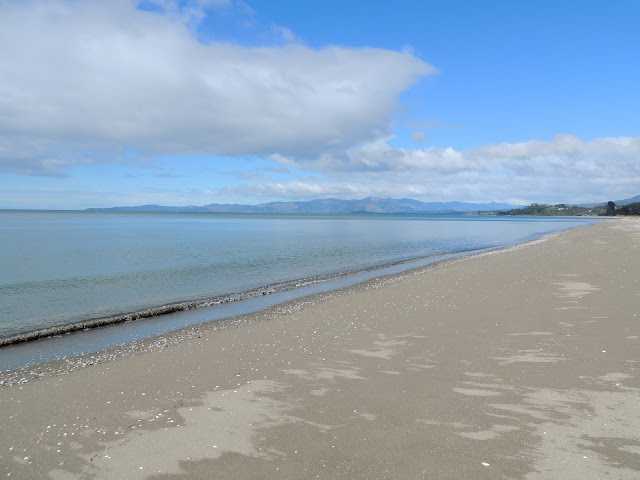 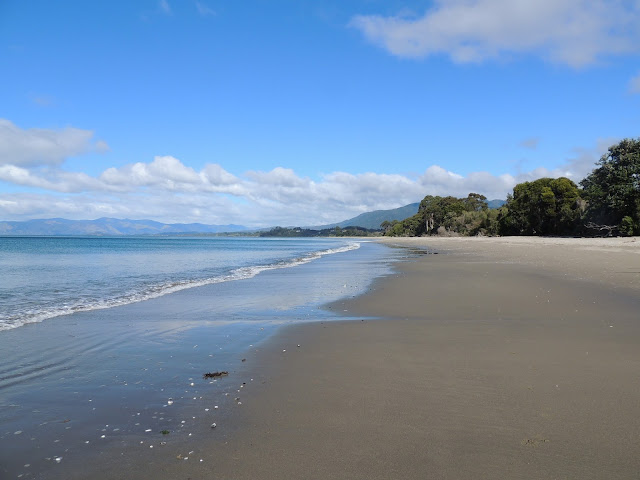 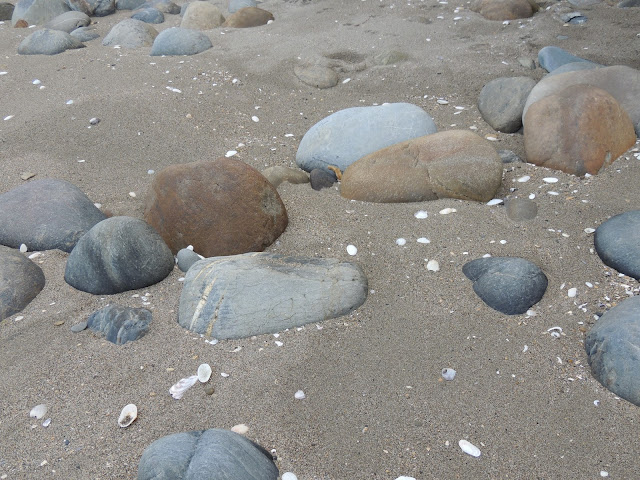 We're closing in on the end of our return path and...oh no! The walkway is submerged in the rising tide. See the Rover back there? So close and yet so far. 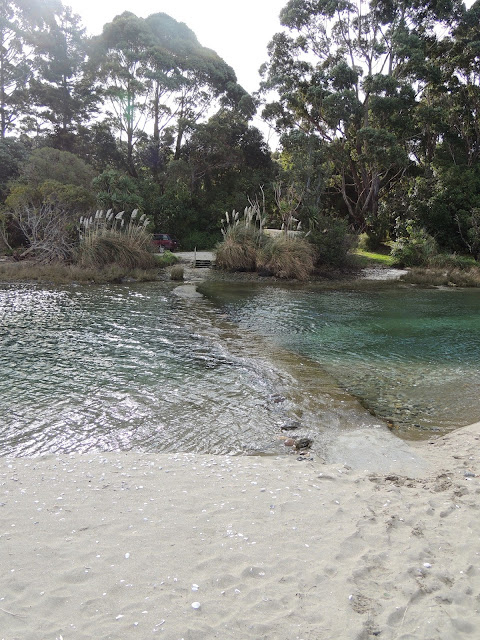 Nothing for it but to turn around and retrace our steps down the beach, back into the reserve, and toward a new path with a wee bridge over the water, putting us on the vehicle side of the inlet. 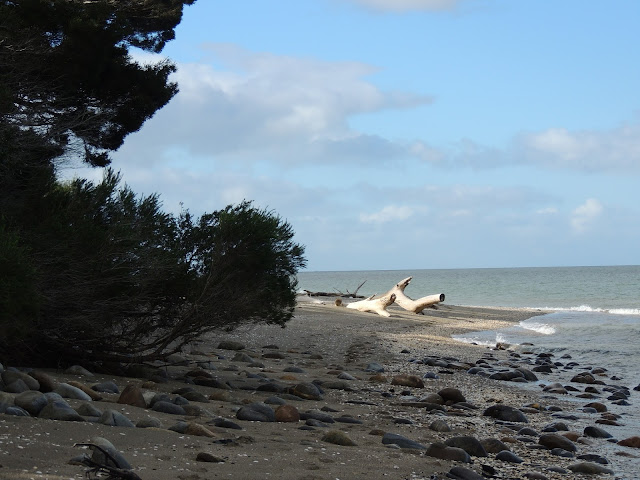 Want to play? I ask Art. He rolls his eyes and heads down the trail that will take us to our car. 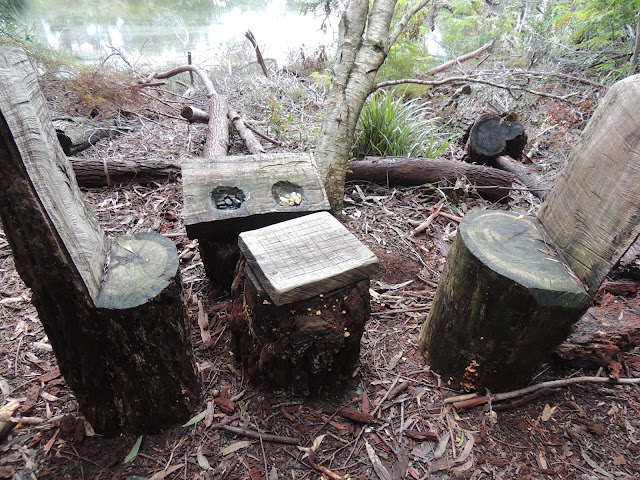 Good night, campers, from your weary hiker correspondents. Here's a picture Art made of a tree on our camp beach this morning that looks to me like a painting. Edvard Munch? 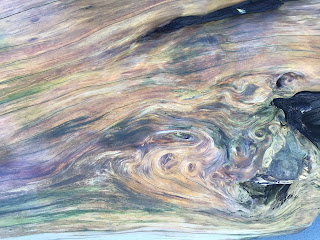