Sheets of blasting rain falling not down, but in curtains sweeping hard left to right. Windy, yow! Our rig is battered from all sides as we drive south from Haast to Wanaka, crossing mountain ranges and raging rivers, finally cruising into the valley and two gorgeous lakes. Here's a description of the South Island that I think explains a lot about Tuesday's trip.


The South Island of New Zealand is long and skinny, with a high range of mountains dividing the East and West coast. The weather tends to go through settled phases, and then builds up on the West coast and funnels strong winds and rain through the mountain passes into the East coast.

Waterfalls coming off the mountains everywhere, many gushing onto the road. 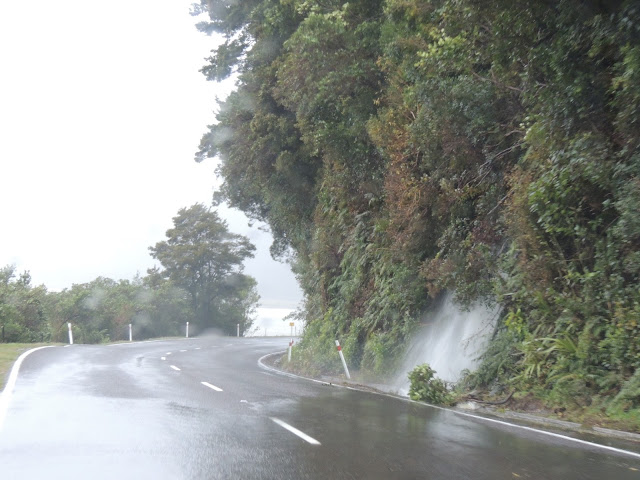 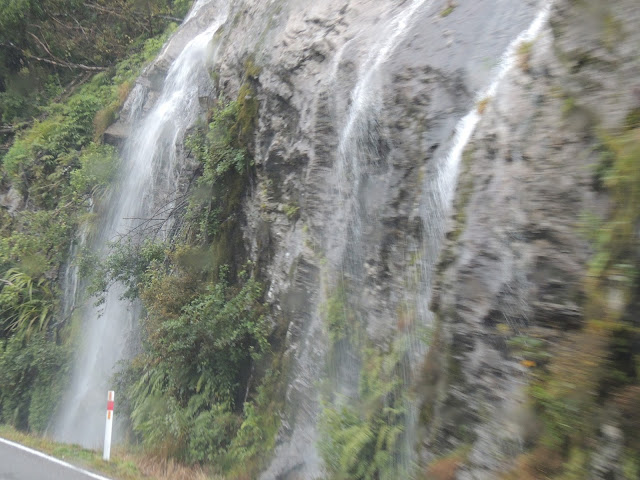 Instead of gravel bars, rivers were moving. 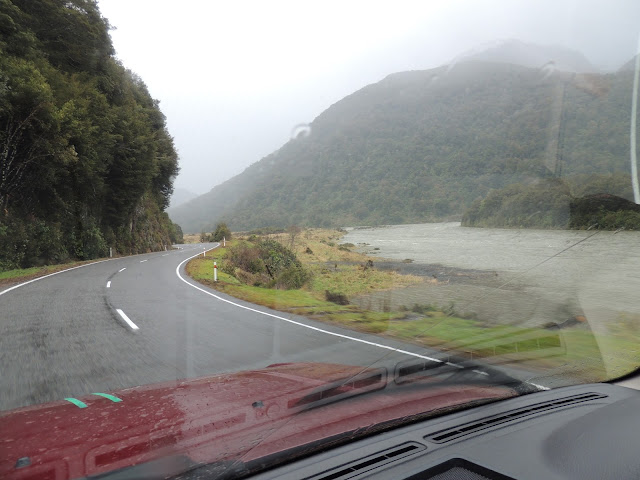 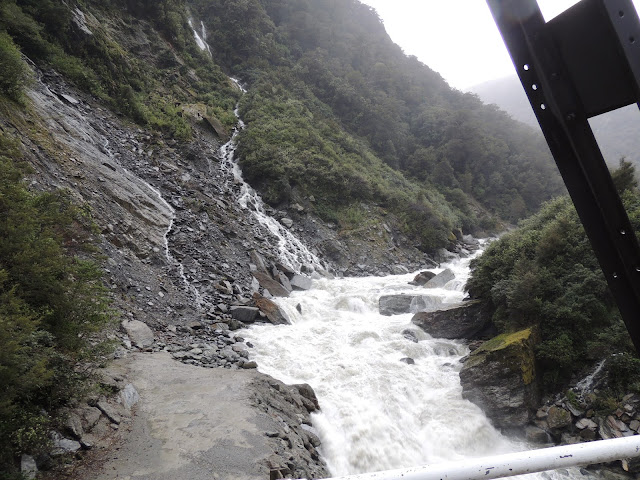 Pause to tell you about Monday, a work day for me but usually I can sneak in a quick field trip. It was raining something crazy and Art suggested we drive to Roaring Billy Falls just up the road from our campground. Sounds good. The falls would definitely be kickin' on a day like this. However, once we arrived and walked the 15 minutes in, it was raining so hard we couldn't even glimpse them...but we could hear Billy roaring, that's for sure.

I took a moment to record the memory in my waterproof notebook (with waterproof pen), a birthday gift from Phyllis. Her nephew works at Rite in the Rain in Tacoma, WA. Click here to check out their line. (Thanks, PK!) 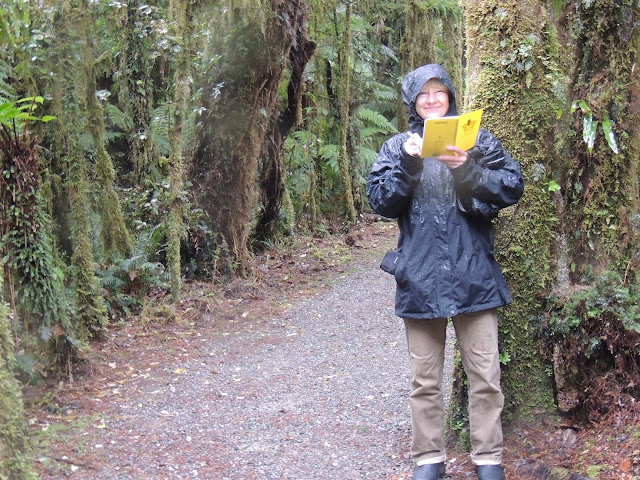 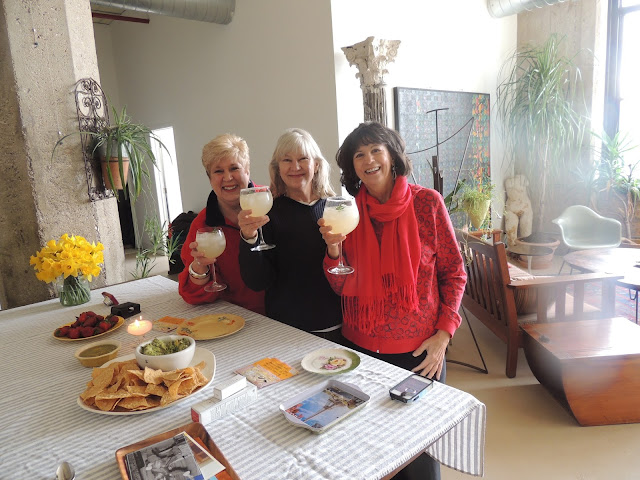 Back to the drive. After a couple of hours of lashing rain and wind, suddenly: Lake Wanaka to our right, a patch of blue ("Enough for a Dutchman's breeches," as Art's 100-year-old grandma used to say), and a rainbow. 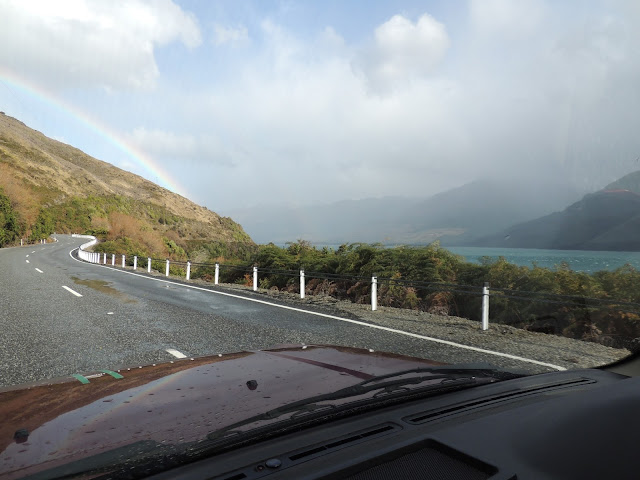 I've lost track of how many rainbows we've seen in NZ. It's an enchanted land. 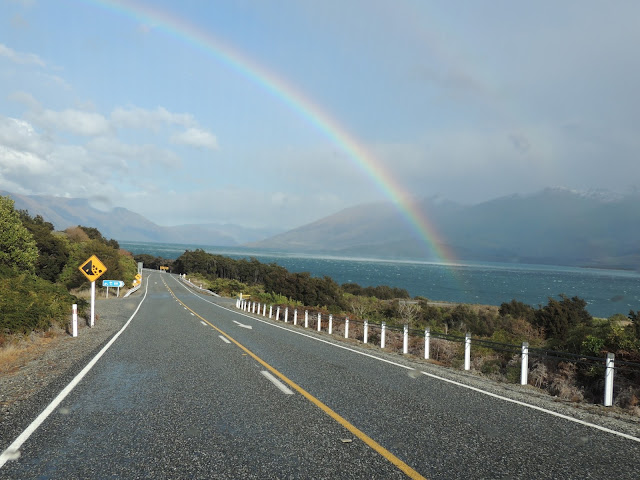 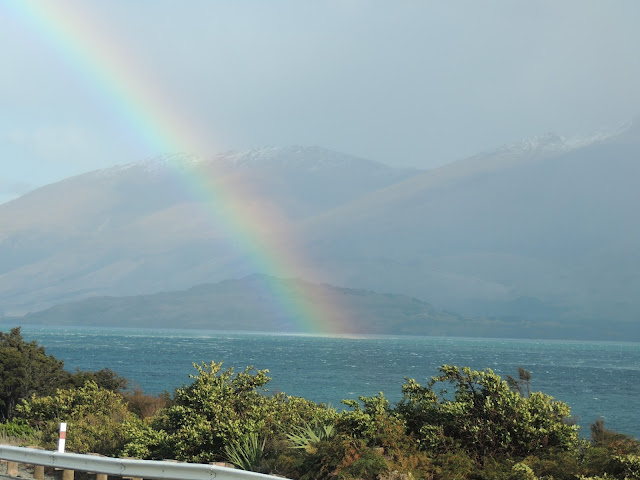 Time for a bathroom break at one of the nice pulloffs. 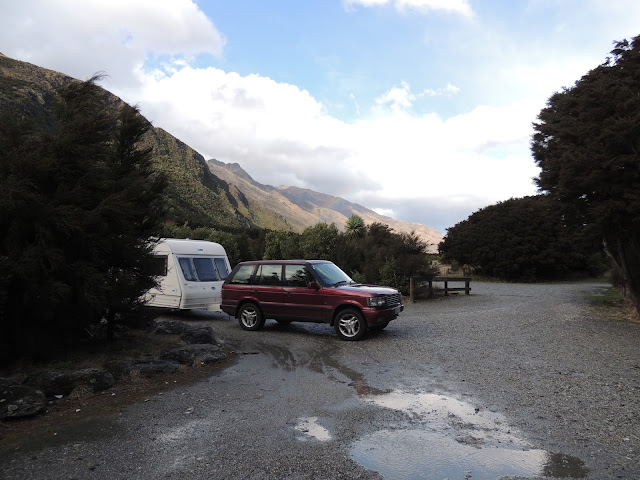 Now here's a Sisyphean task in reverse, and it takes place on virtually every NZ mountain road we've driven: crews block off the lanes while they collect giant chunks of rock that fall off the mountain faces onto the roadway. 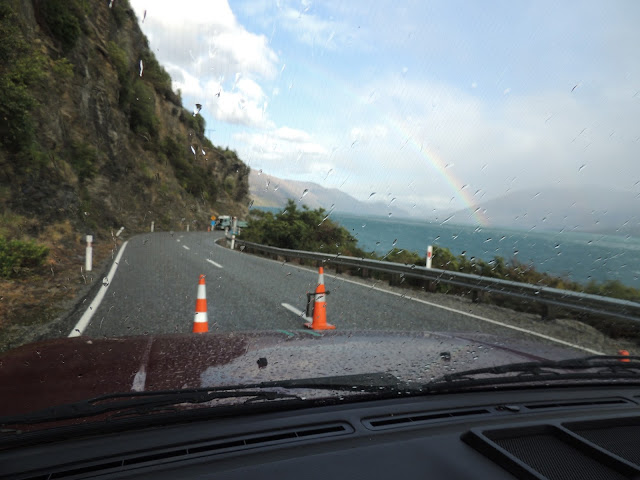 "Just missed it," this friendly worker said when we pulled up. "Be about ten minutes." We turned off the car and talked happily about NZ, Wanaka, and the 50 mph wind gusts his pal up the road had recorded on his anemometer. 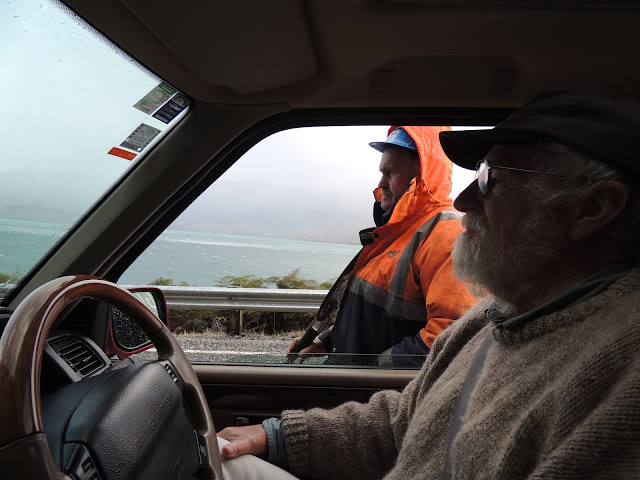 With Lake Wanaka to our right, suddenly Lake Hawea appeared on the left. We're at The Neck, seen on the map below where the two lakes nearly converge. NZ's fourth largest lake, Lake Wanaka has an estimated depth of 980 feet. It's 26 miles long.


Wanaka lies in a u-shaped valley formed by glacial erosion during the last ice age, more than 10,000 years ago. It is fed by the Matukituki- and Makarora Rivers, and is the source of the Clutha River. Nearby Lake Hāwea lies in a parallel valley carved by a neighbouring glacier eight kilometres to the east. At their closest point (a rocky ridge called The Neck), the lakes are only 1,000 metres apart.[3] 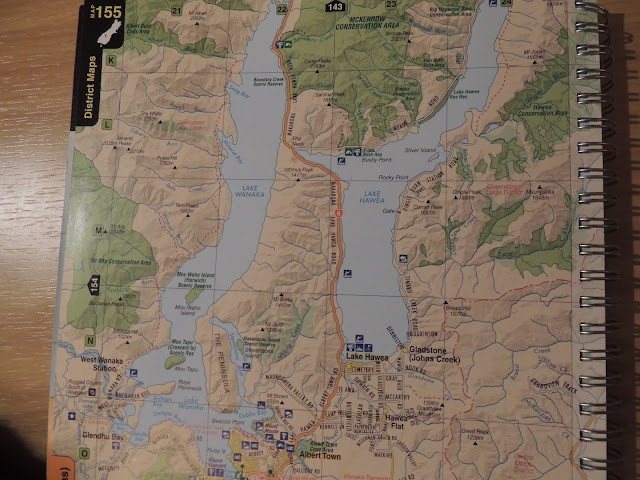 Driving through The Neck, Lake Hawea emerges under a glorious sun/cloud sky, its rocky mountains touched with snow. 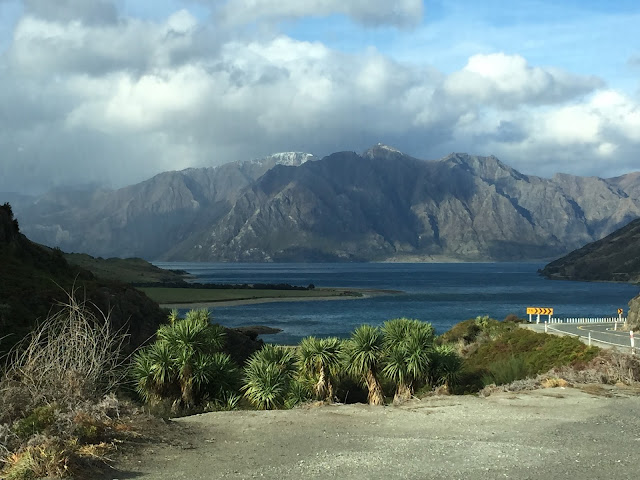 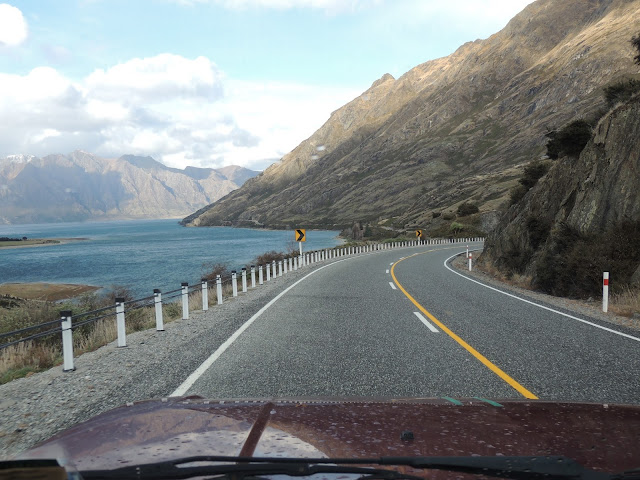 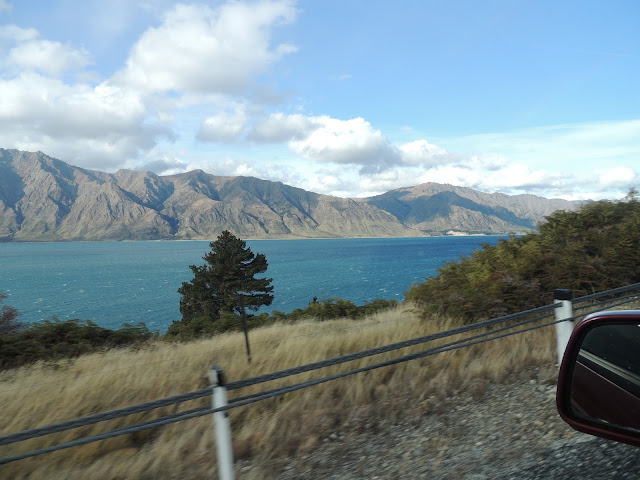 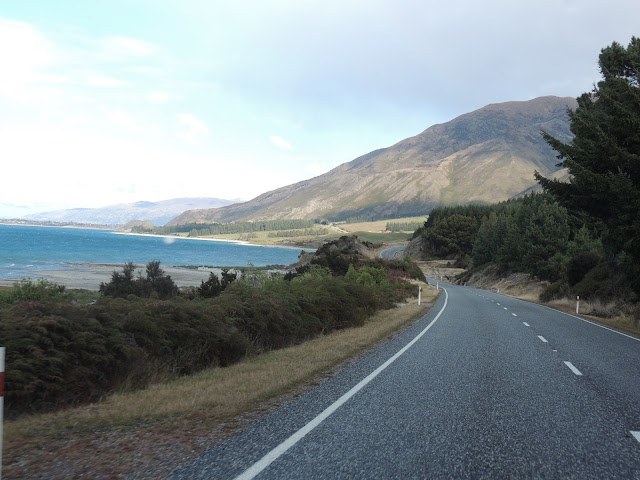 The weather's shifting again as we find our campsite, a quasi-remote spot at the mouth of Lake Wanaka where it meets the Clutha River. 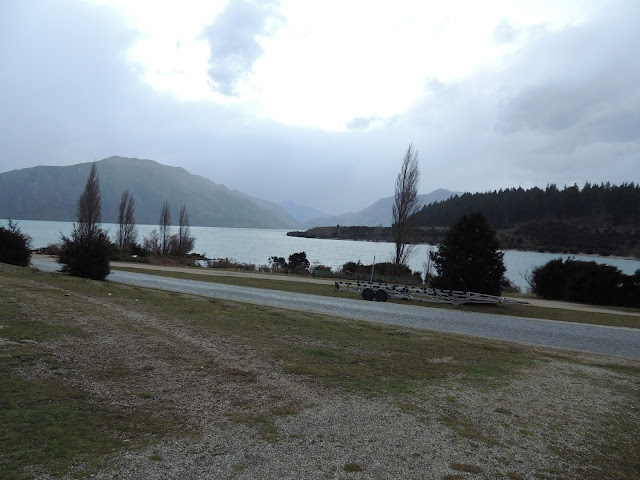