Campers, this might be the strangest thing we've ever seen or done. The literature sounds a little suspect: Discover one of the most fascinating sights you're ever likely to see. Flames burning in a forest for 100 years...without destroying the trees. Along with pancakes and billy tea. 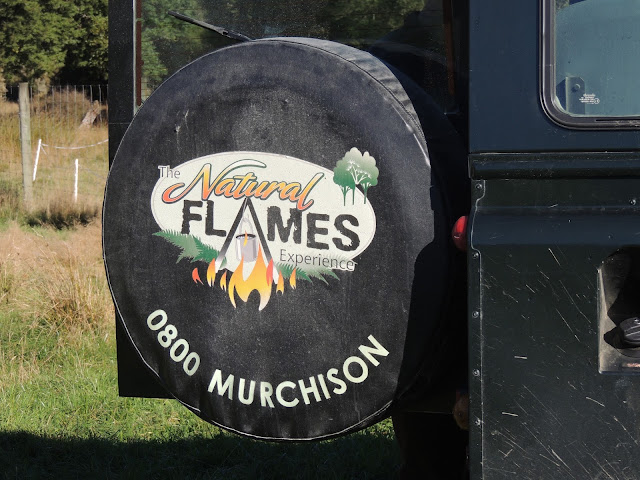 After I finished work Monday, there was still time to make the 2 pm departure, so after confirming there was space (we ended up being the only people on the expedition) off we went in Steven's Land Rover. Art enjoyed not being the designated driver as we flew down the gravelly farm roads, opening and closing gates as we crossed a private deer farm (raised for meat) and through DOC (Department of Conservation) land. Steven and wife Elizabeth pay a small fee to have this access. 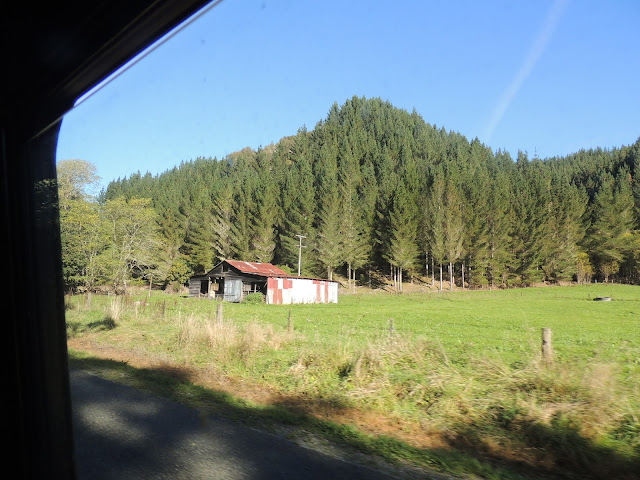 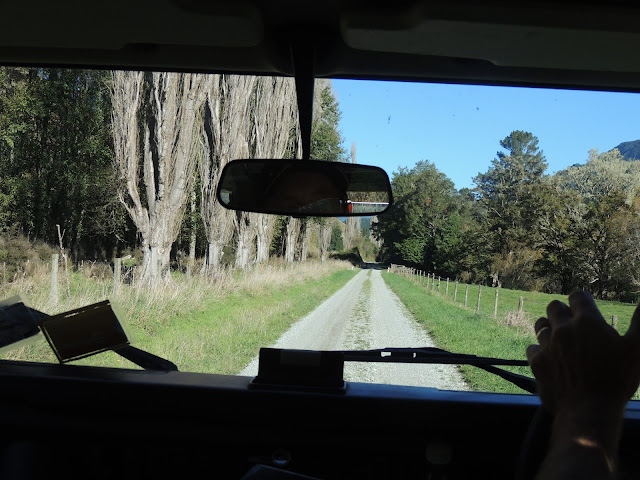 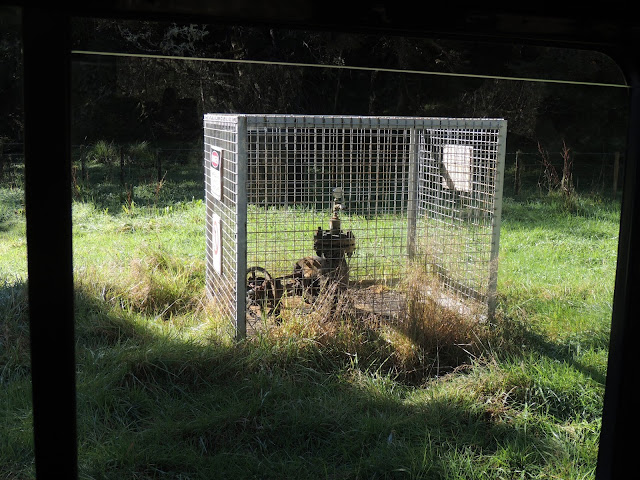 Art inspects a bottle of what came out of the first well.  A second attempt was made by a larger oil concern in the 70s to no avail. 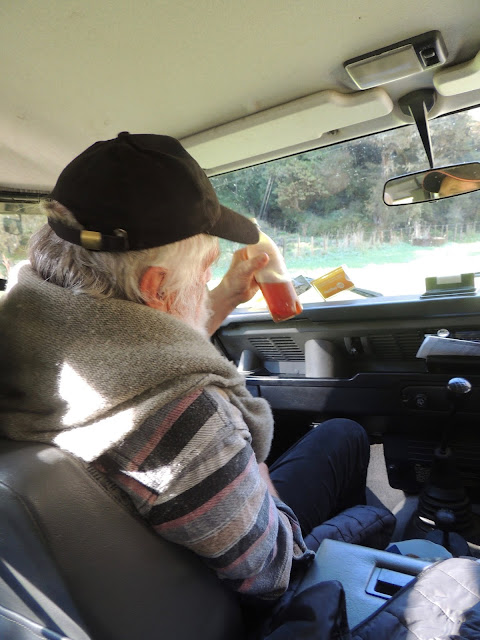 Here's the set-up for the second attempt, which drilled down thousands of feet. 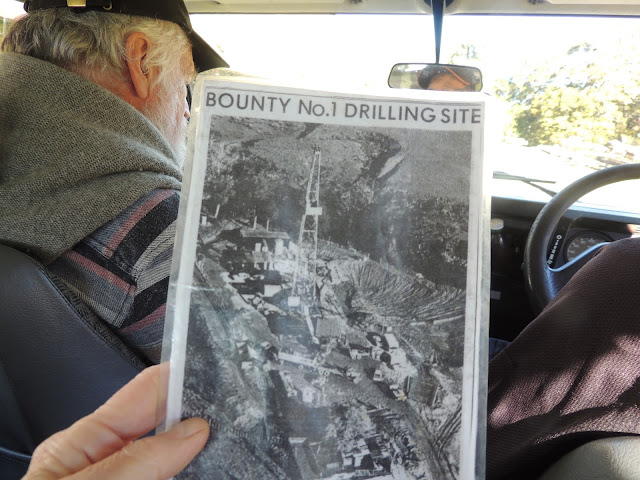 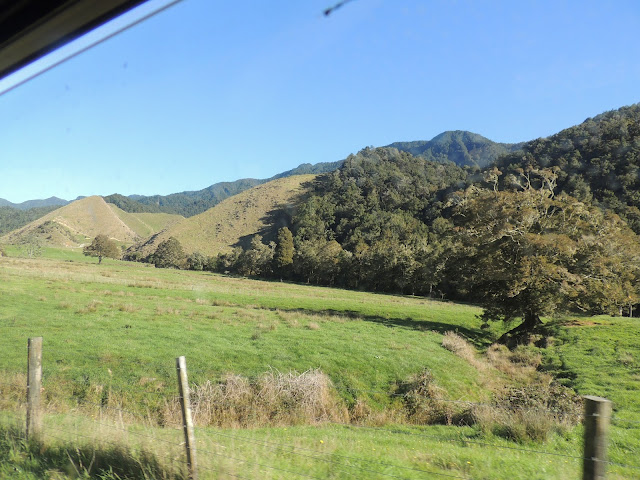 This deer farm is about 1500 hectares (3706 acres) and is fenced. It's an enormous property and pretty much unfathomable. 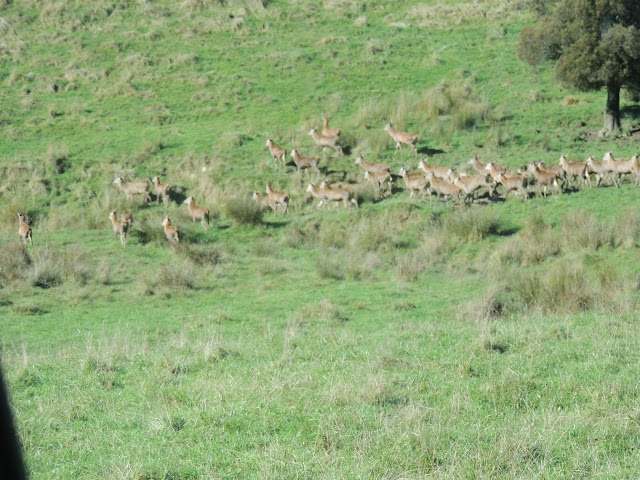 On the outside of the fence are some feral deer, including this white one. Feral deer are fair game for hunters, but we were told the white one is never taken since it serves as the hunters' signal flag for the rest of the wild herd. 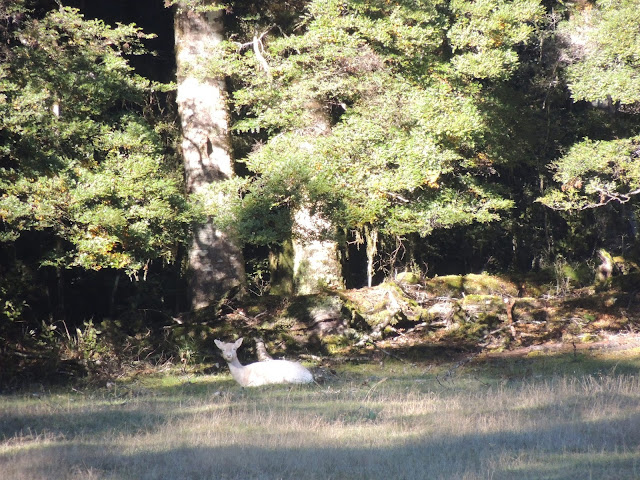 After 40 minutes of driving over hill and dale we arrive at the last gate and park. 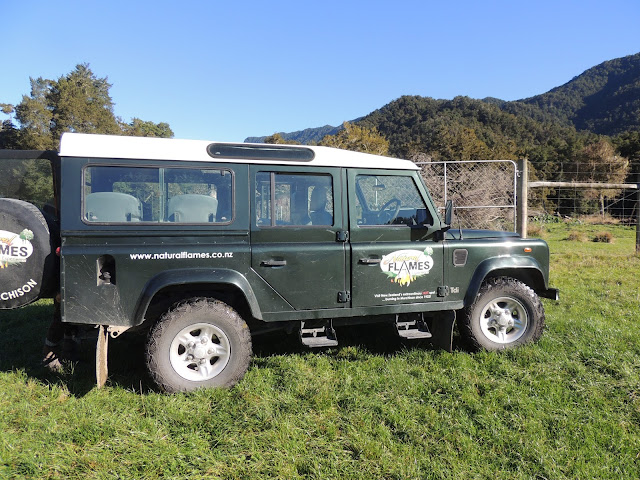 Steven has walking sticks but Art has his sheep's horn special and I decline, since I'm holding my camera. 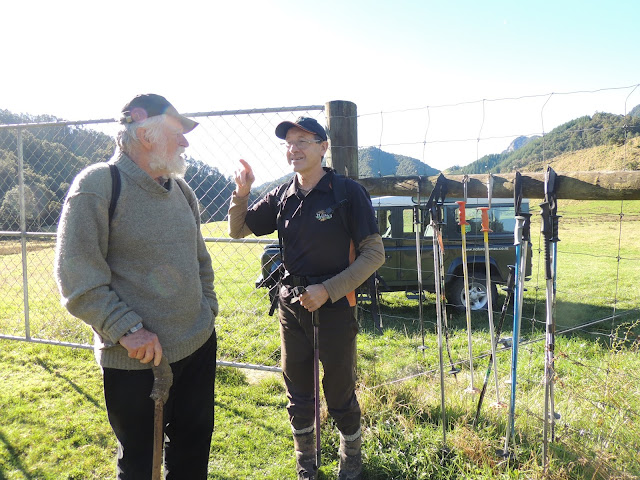 We set out for the hour's walk through some beautiful country, going deeper and deeper into the bush. 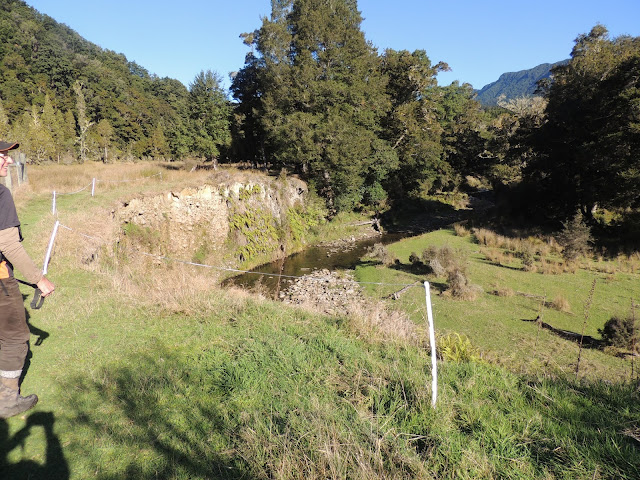 Distance wasn't so much the thing as terrain, and Steven told us about the flora, geography, and birdsong along the way. 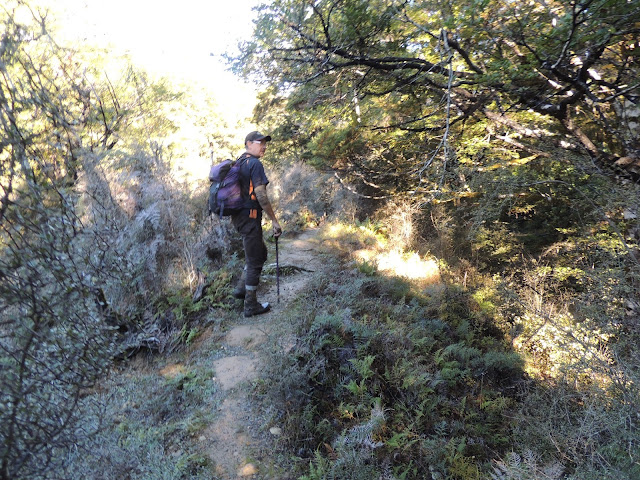 He checked several stoat traps on the path to the flames, this one baited with venison. 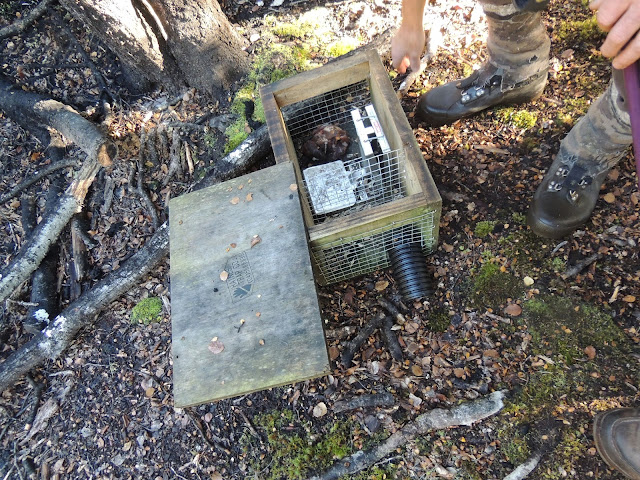 Here's something Steven called a "pippa" shrub, but that's only the way I heard it. Sometimes even English is challenging to grasp in NZ. It's a pepper shrub, and as we bit down on a leaf it flooded our mouths with spice. Maori call it kawakawa and European settlers dubbed it Maori painkiller, since it was used for toothaches (and much more--click here to read about Maori medicinal plants). 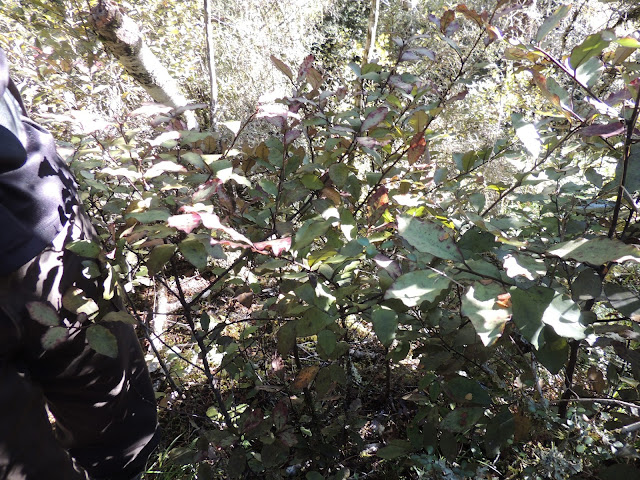 The forest is primarily made up of several varieties of beech and white pine, the latter cut to make boxes for shipping butter, ideal for this because the wood transferred no odor to the export. For this reason, the white pine is sometimes called butter-box tree. 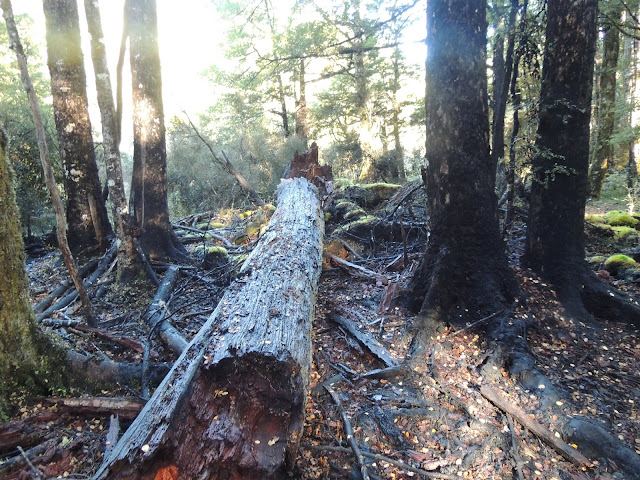 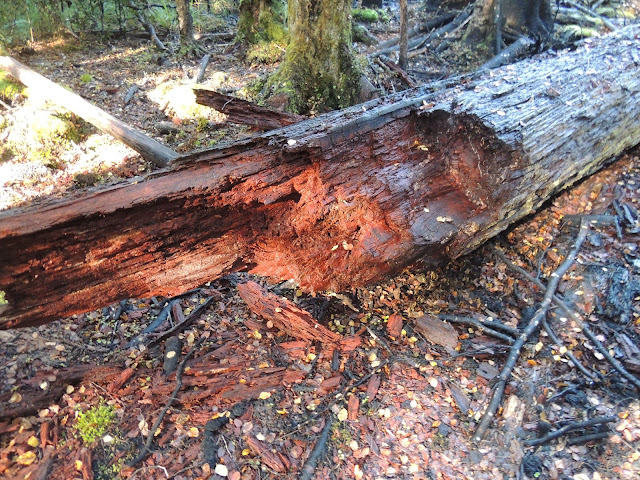 On and on we walked, stepping over logs and sliding around in the mud. If you offered me a million dollars I could not find my way back. 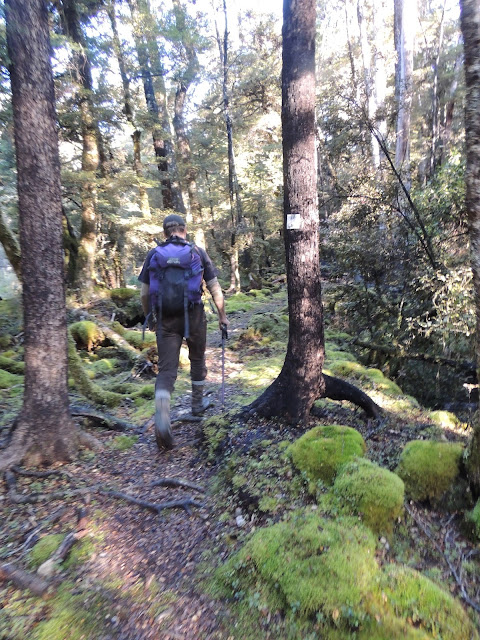 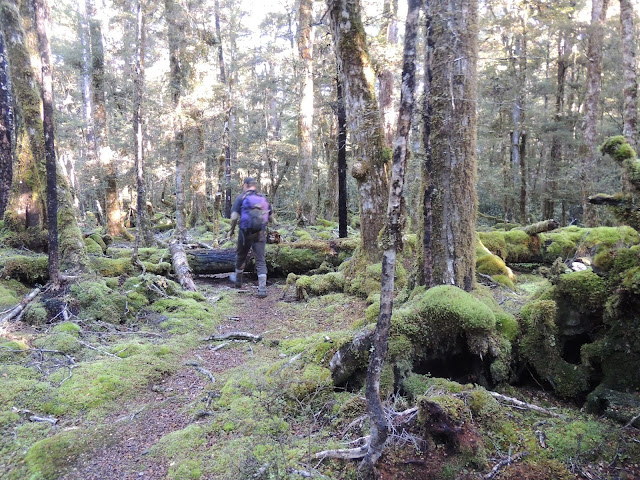 Why don't you go on ahead there, Heidi, Steven suggested. OK, I thought, and over the next rise I came upon... 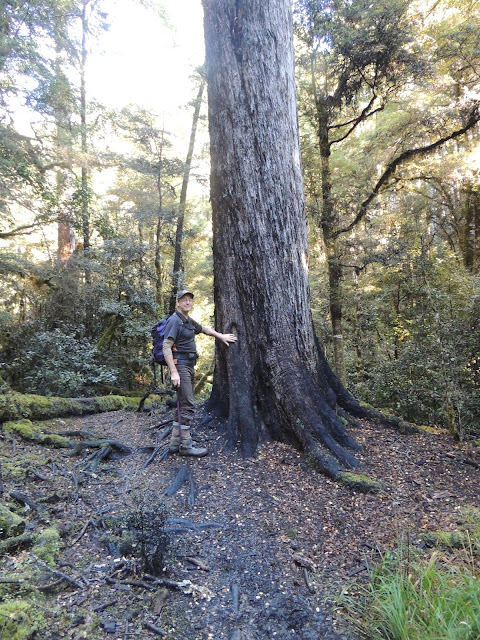 ...this. What?! I suppose we all knew what we were walking toward, but seeing this in front of you boggles the mind.  It's otherworldly and warm. 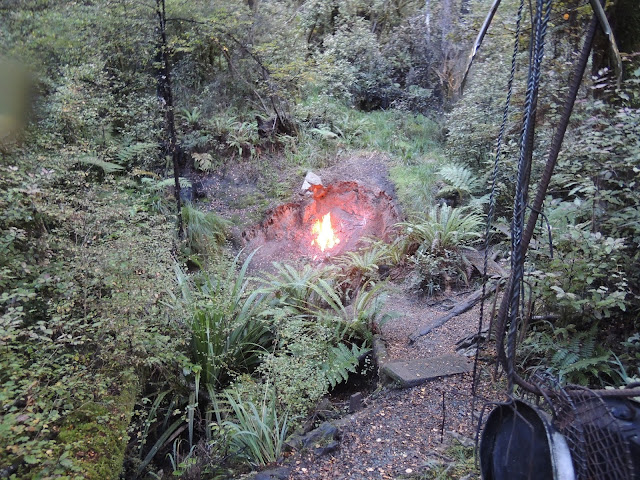 So here it is: flames coming up out of the ground, powered by a natural gas source. It's eerie. Note the small flames licking up at random points. 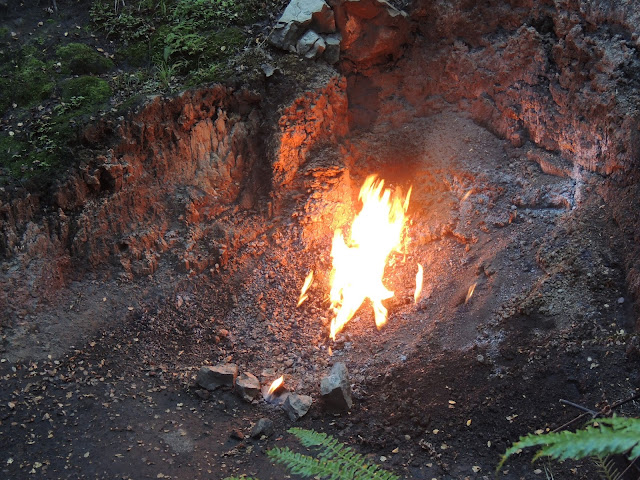 Steven gets the kettle ready to heat water for hot drinks. What a great tour this is! 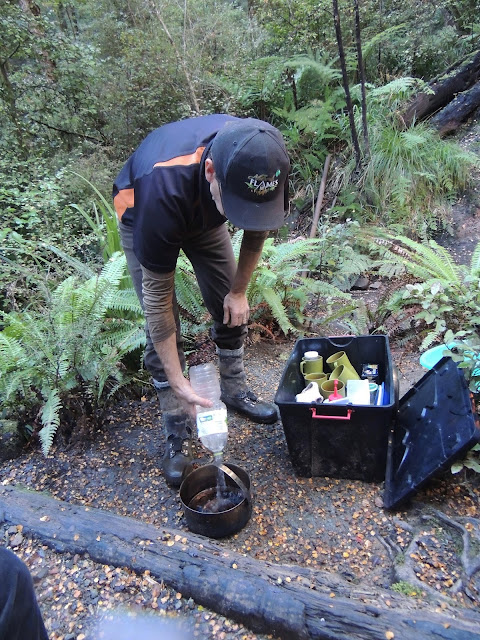 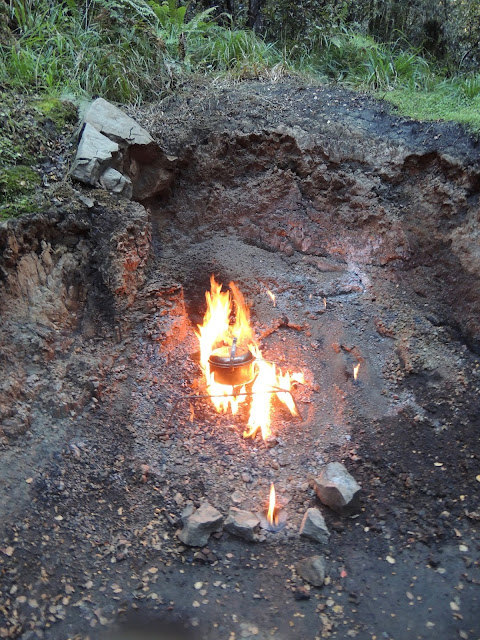 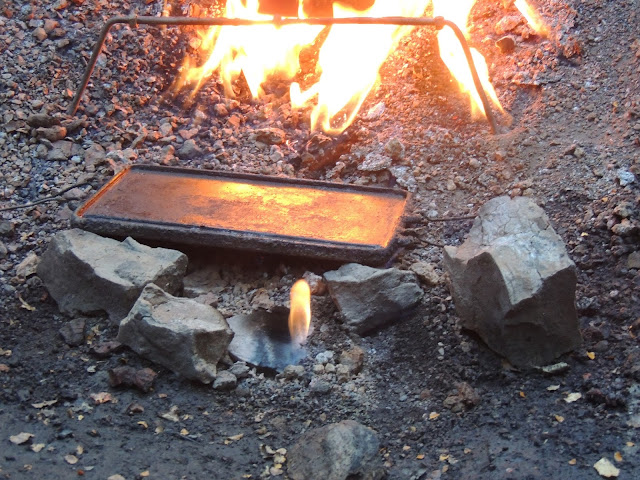 It's removed and the batter poured onto the flaming-hot surface. (You know the pancakes are a big part of why we came. ) 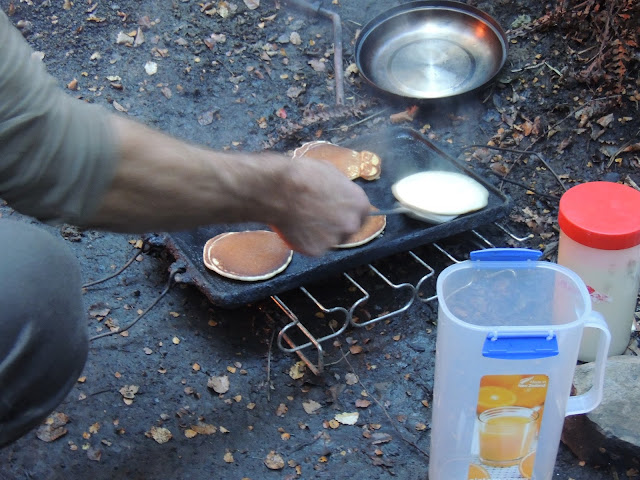 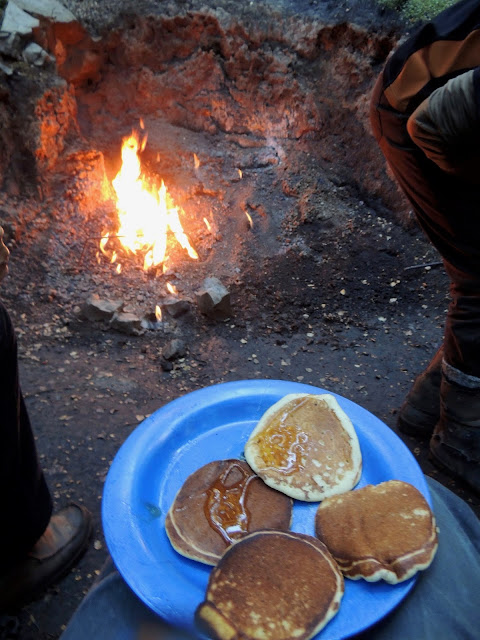 It's about 70 degrees F and perfectly comfortable in front of the flames. So relaxing, in fact, I wish I could pull out a sleeping bag and spend the night here. 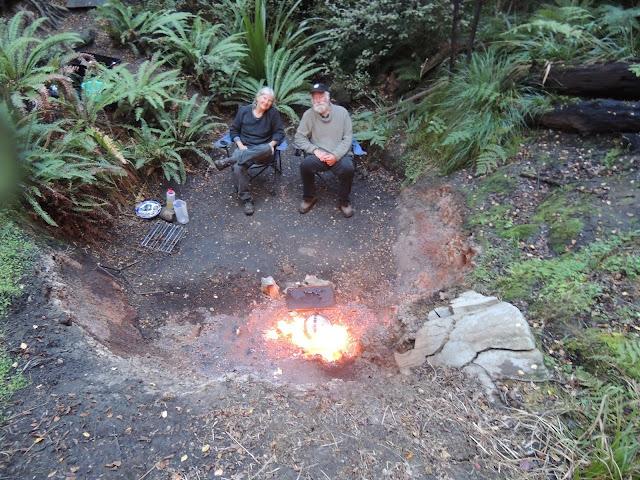 Now that everyone's situated around the natural flames with a nice cup of tea and pancakes drizzled with beech tree honey, let's hear Steven tell the story (turn up your audio and, as always, if you're reading via email click through to our site to view).

Right here I'm thinking of Lisa, who used to stand in front of our fireplace like this. 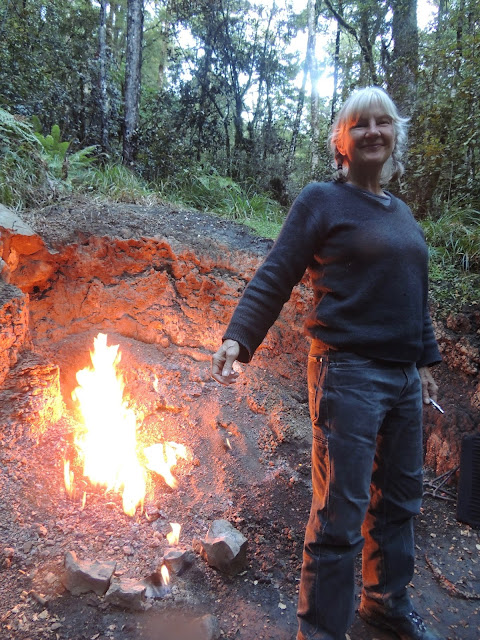 Sadly, we have to pack up and leave. Remember, it's an hour's walk through the bush to get back to the Rover. Steven turns back, saying under his breath "Just let me go turn it off."

A most delightful and unlikely outing! 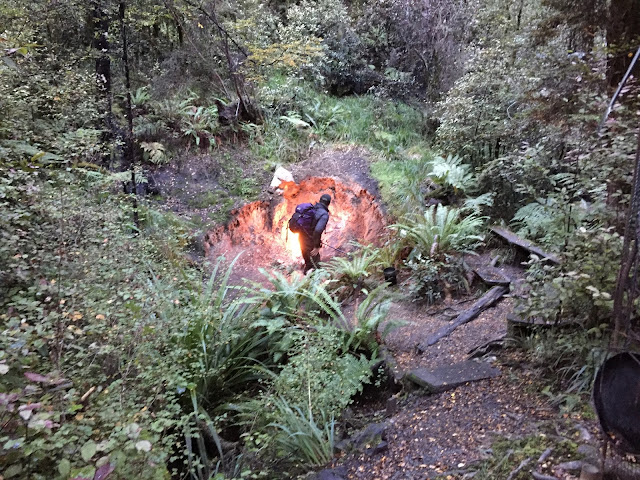