Kia ora, everyone! Some of you have asked about the jet fuel pipeline rupture that's causing rationing and a cut-back in flights here. Here's a follow-up to the story, with a video response from Labour candidate Jacinda Ardern that seems sensible (even if it's clearly a blame-the-guy-in-power move).


The pipeline carried all Auckland's aviation fuel to a depot near the airport until it ruptured last week leading to fuel rationing for airlines, which have been forced to cancel and re-route flights.

McNaught said alternative transport arrangements were still a "work in progress" and the priority remained cutting demand to 30 per cent of usual from airlines at the airport through reduced flying or aircraft taking on fuel at other New Zealand airports or those in Australia or the Pacific. 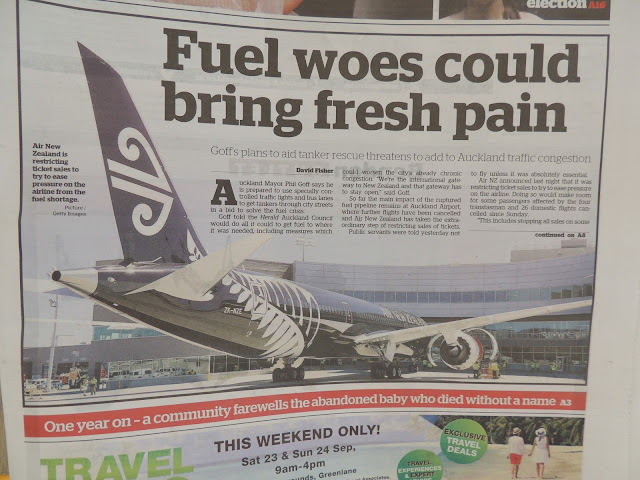 Meantime, beautiful here in Kuaotunu and how grateful we are to have a string of days in which we don't move anywhere in a car. We did a lot more of this on the South Island with the caravan, staying in a single location for days or even weeks at a time, exploring locally on foot and in the car. The very definition of slow travel. 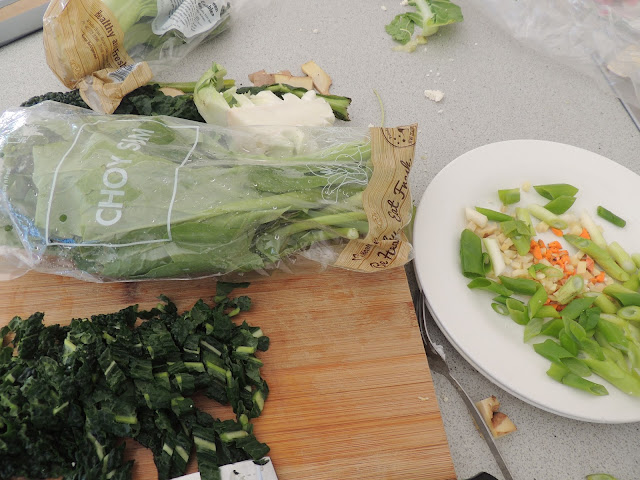 We did some laundry today and then went for a stroll on the beach. As I write, I can hear the call and response of mother sheep to their babies (and vice versa) high on the nearby hills. It wasn't until we walked Mount Maunganui (and took all those lamb pictures) that I fully understood that the moms will bleat and bleat until the little one recognizes her call and comes running. And the babies the same.

The walk to town from our airbnb 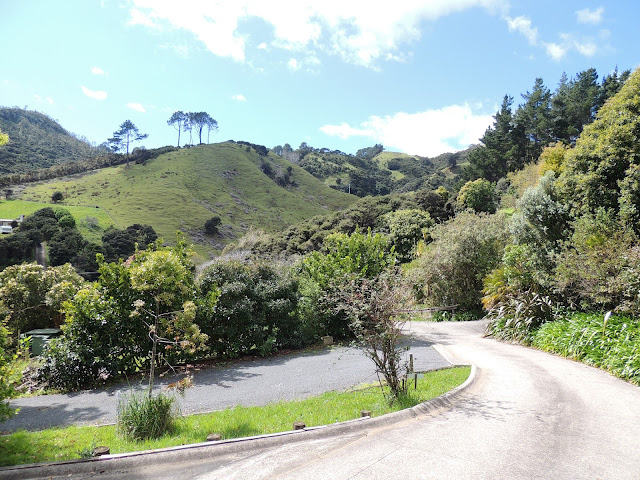 You'll recall I asked Ben, who built the place we're in, for more days, but he's booked. He suggested we stay a couple more days in his grandfather's house across the street, where he grew up. It's also an airbnb, an old-school beauty by the look of it and another great value. Click here to view the listing (uh, it looks like 11 more people could join us--takers?). Plus, the gardens! 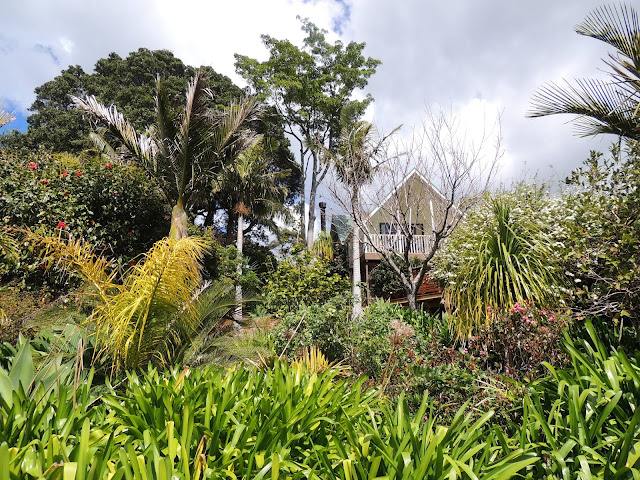 We walked into town, which consists of a wee store, a coffee place, and a wood-fired pizza resto. Plus this haircutter-in-a-caravan called Schnipp Schnapp. 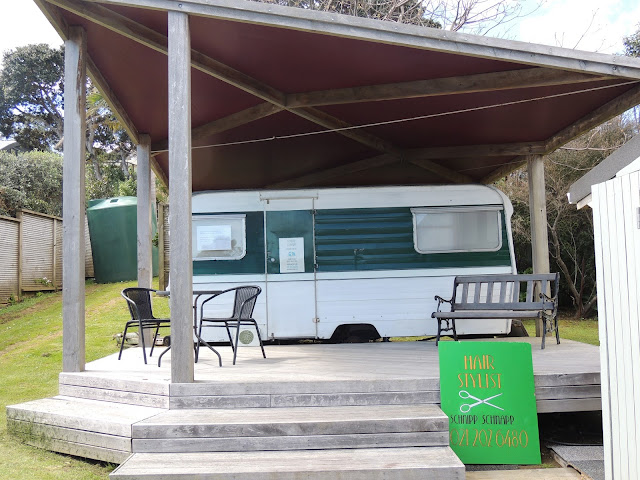 And then to the beach across the road. 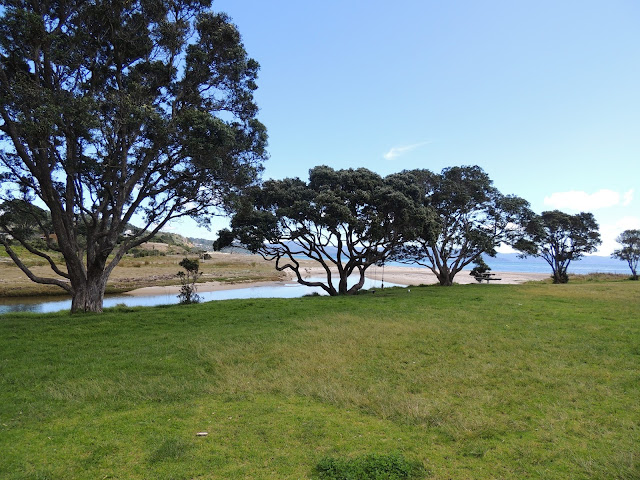 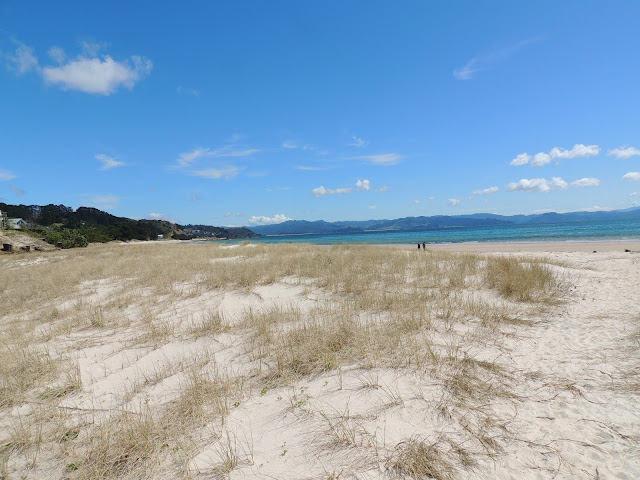 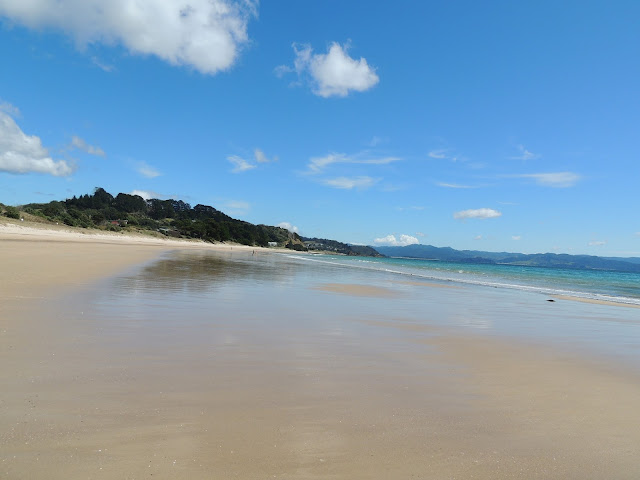 Modest beach houses dot the dunes. Today I asked someone at the local store about books. She said: there's a beach swap library in a tree near that large house being built. I completely missed it but it's intriguing enough to go find it. 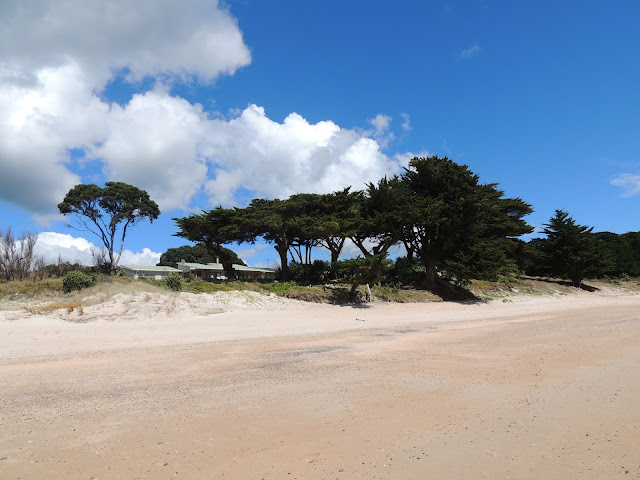 Toward the end of the beach, solidified lava flows. 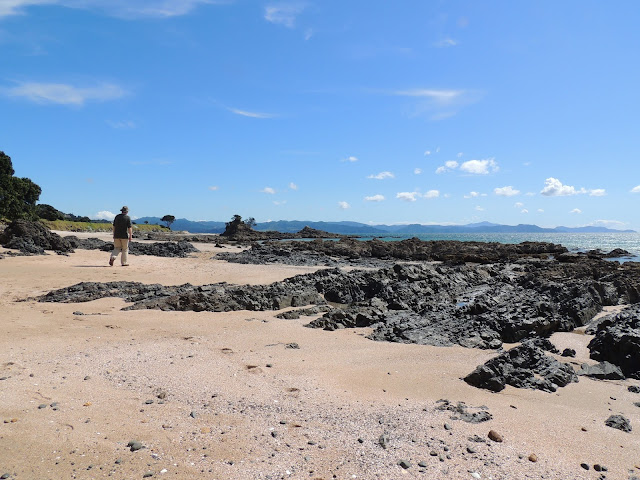 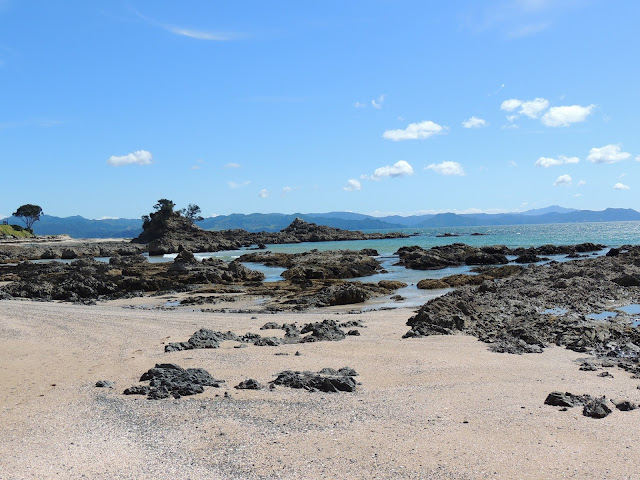 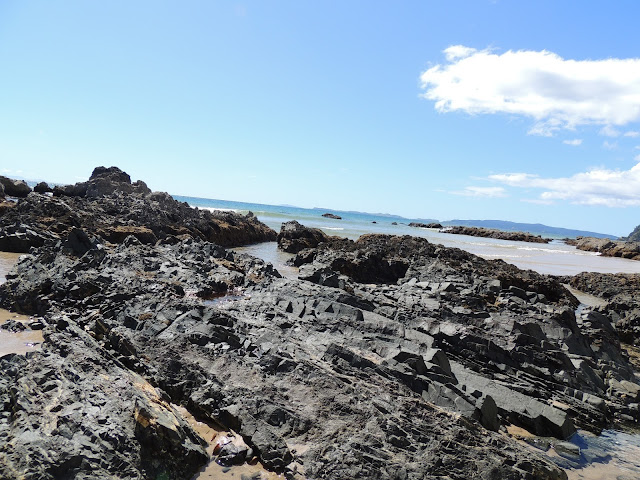 Note "Coromandel No Mining." I'm not certain where this is being proposed. 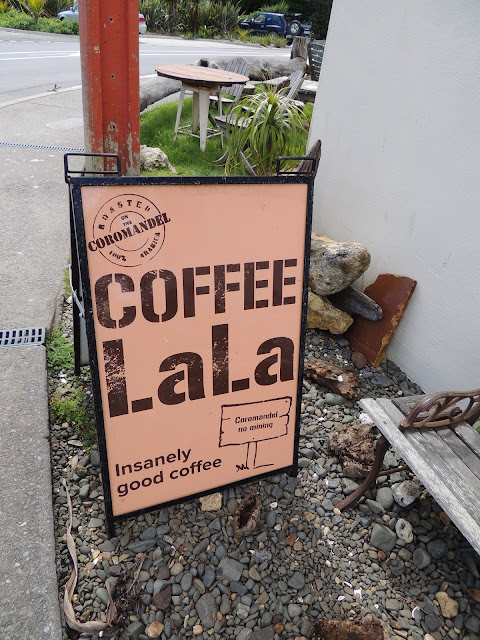 It's a cozy cafe. 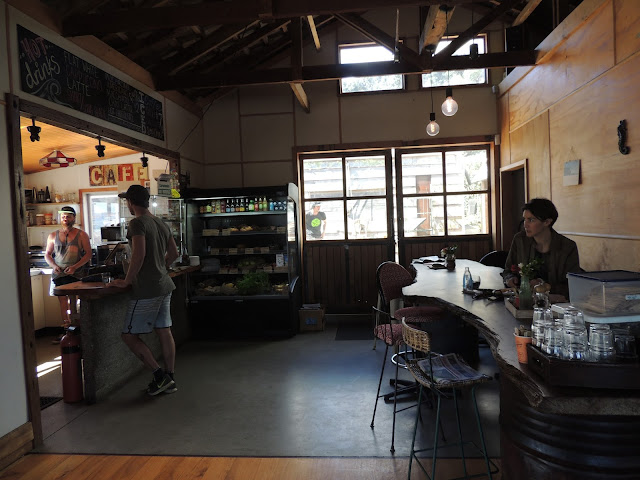 Luke's Kitchen is something of a landmark here, open only on the weekends in winter. We might try it. 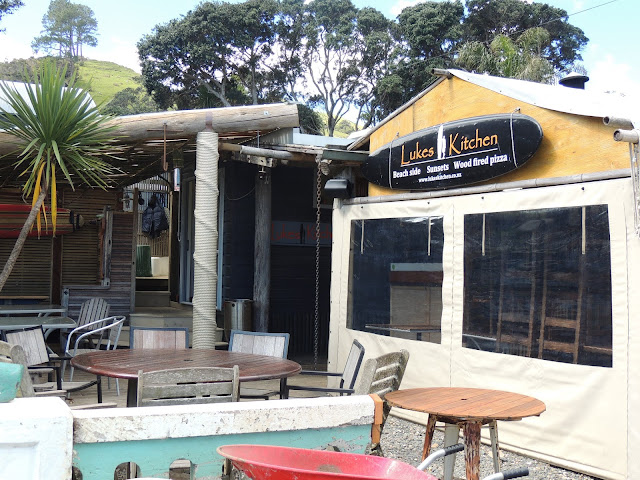 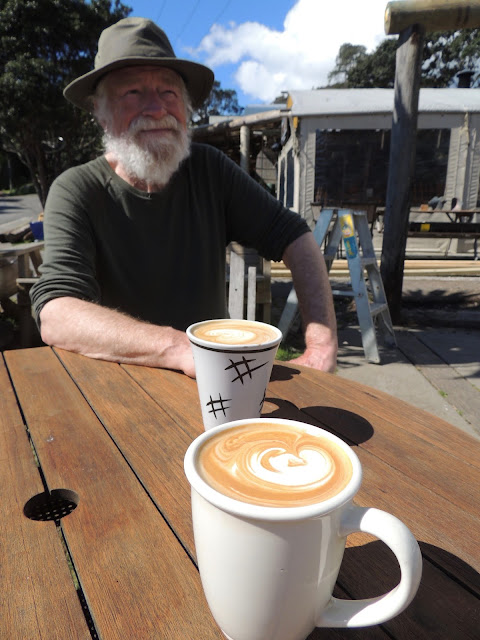 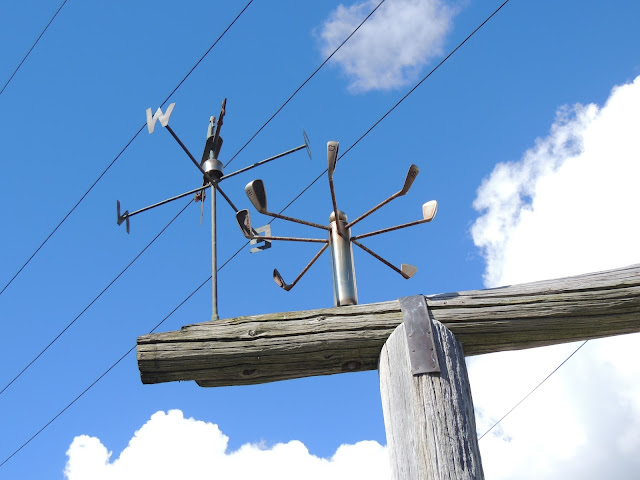 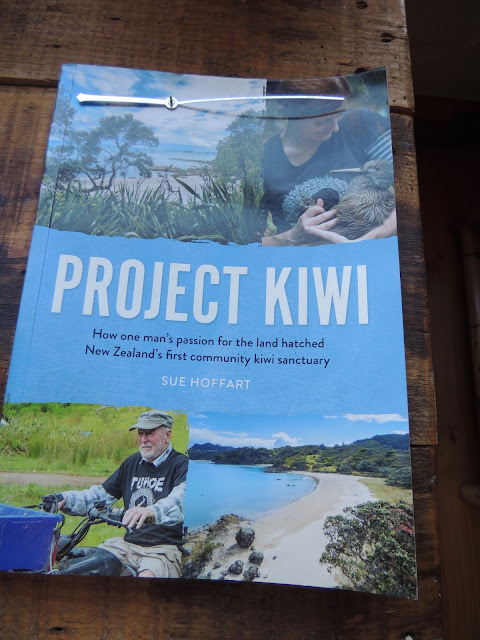 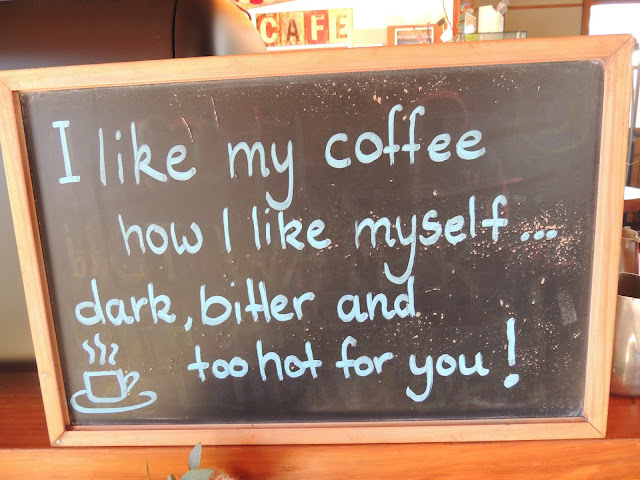 Art found yet another brand of charcoal he's trying out today. They all cook differently, but he's up to it. 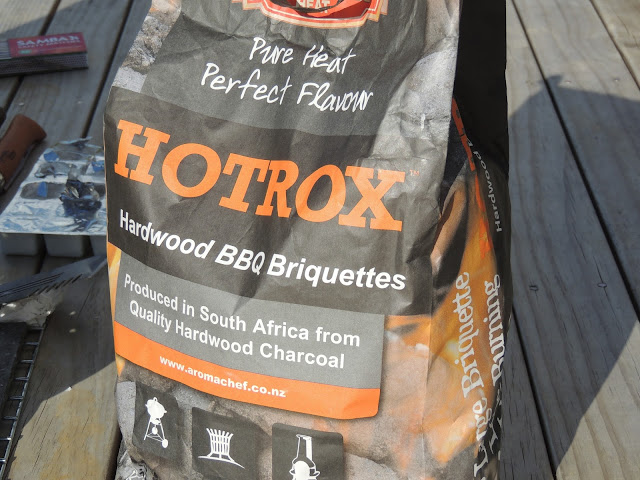 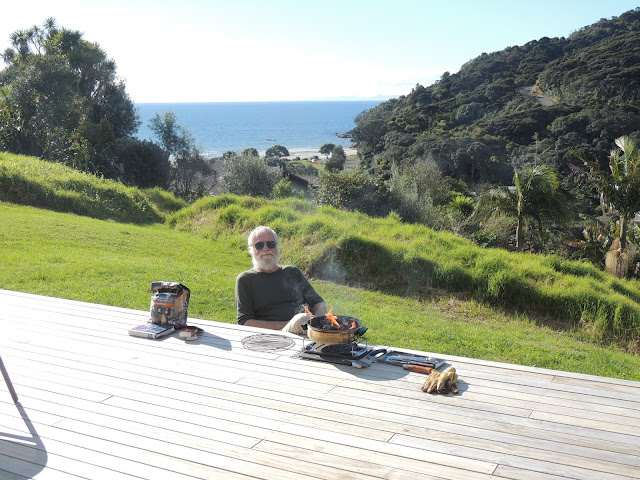 Final note: good story (and marketing) on the Great Walk designation being applied to shorter jaunts. The Great Walks are all overnight, multiple-day treks and hikers stay in Dept of Conservation huts, which in summer you must reserve. That's a good aerial shot of Cathedral Cove, which we wrote about a couple days ago. 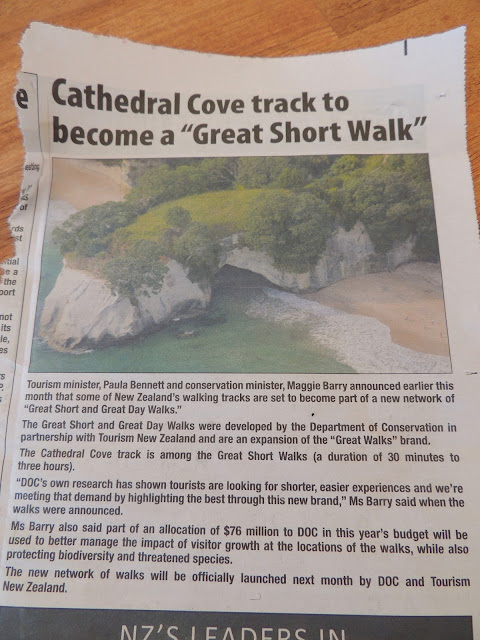