Valentine, Nebraska, just a 20-minute drive from our isolated Smith Falls campsite, is our destination this morning. We're in the Nebraska Sandhills, an astonishingly beautiful region in north-central Nebraska that's made up of...sand. 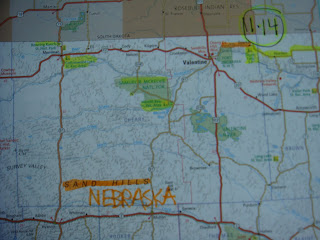 Back to Valentine: We have a list and, yes, we have a fuel pump Art wants to check out once again before we start rolling up the foothills of the Rockies.

The Ford guys are not much help, though they do have wi-fi, and the agreeable Stacy in Accounts gives me the password while Art tries to tell the guys in service what he'd like them to do (put in the big-boy mechanical fuel pump).

But they're like bad doctors: they won't really listen, finally deciding that his tricked-out 460 engine is beyond their (this is Art's word) pea-brains. 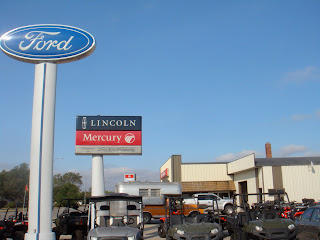 I download my Dr E work, though, so I'm happy, and Art leaves me editing in the Ford lobby (where an endless tape of Big Trucks on the Alaskan Highway plays in the background) while he goes in search of an actual mechanic.

Sometime later he returns and we end up at this guy's shop. He's clearly a brilliant mechanic (Art has asked around), but he's also got Rush Limbaugh on the box and is holding court on politics with the guy ahead of us. It seems an odd mix of libertarian philosophy and orthodox loonie-tunes.

I keep my distance. 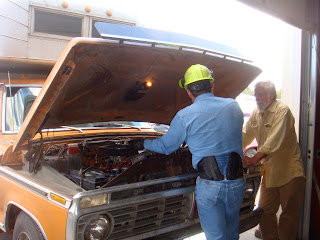 Happy to go get ice for the cooler (camp rule: take any opportunity to buy ice) and photograph for your enjoyment still more windmill arms on the move. They are even bigger than I thought. (You can click on any picture to enlarge) 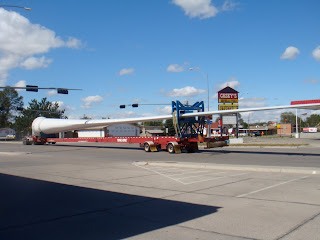 It all works out after a couple hours of biding our time, during which Art talks to a retired Chicago fireman also awaiting the touch of the politically charged mechanic. Art finally gets an opinion on our situation, which he adds to his collage of other expertise. He's satisfied and glad we waited.

We fill up and drive a scant 23 miles out of Valentine to the campgrounds at Merritt Reservoir, an amazing spot in the ever more intriguing Nebraska Sandhills. 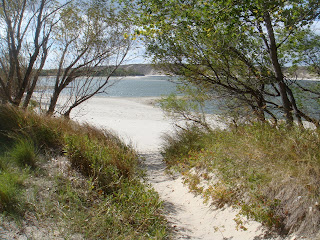 I ask a nice old-time RVer in an NRA cap about the Sandhills (first question: where are the cranes? Farther south he says.) He tells us they're a vast expanse of sand and dunes with mostly grasses growing for livestock to graze. Precious few farmers grow corn or alfalfa, because the ground is literally sandy drainage. 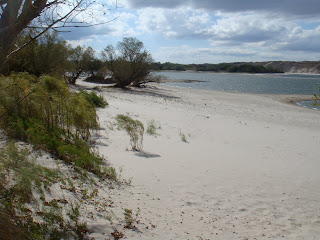 Irrigation is a constant concern. Rain and the arrival of rain are common topics, the guy tells me, starting "an hour after the last rain." 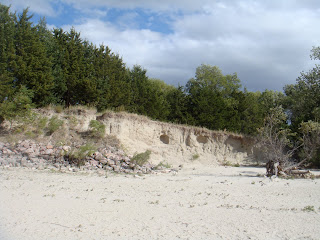 The reservoir is some 8 miles long, with water diverted from its 80-foot depth as needed. 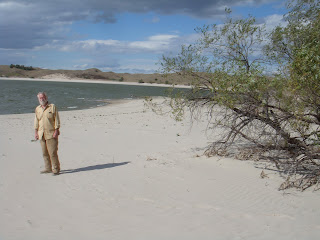 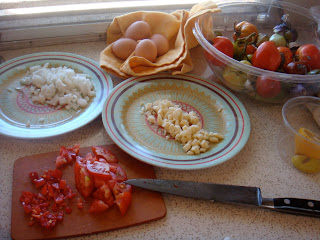 It's incredibly windy this evening--so windy at one point that it leans into the open camper door and I can't pull it shut until I crack the louvered windows to release the sail effect. 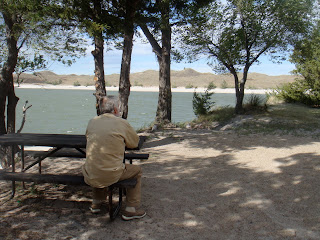 Tonight we sleep like babies in the cool air. The relentless wind dies like it was switched off. Overnight at Merritt Reservoir with the windows open, perfectly quiet. So quiet it almost hurts the ears.