Kakapo: Every One Of These Endearing Parrots Will Have Its Genome Sequenced

Via The Atlantic (full story here)...
When humans first settled in New Zealand in the 13th century, they found a wonderland of strange creatures—including a green, bumbling parrot with the face of an owl and the mien of an old gentleman. That was the kakapo—the world’s largest parrot, and its only flightless one. It had a set of endearing traits—a disc of whisker-like facial feathers, a ponderous slow-motion gait, and a habit of awkwardly climbing trees with its beak and large wings—that made it easy to love. It also had a set of unfortunate traits—an inability to fly, a naïveté toward danger, a distinctive earthy smell, and a habit of freezing when threatened—that make it easy to kill. 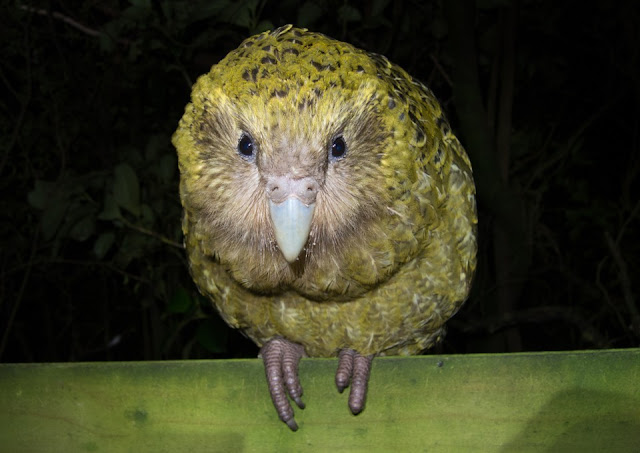 ...the kakapo—once thought extinct—is one of the most thoroughly studied animals on the planet. Every single one of the last 153 kakapos on the planet is known to researchers. Every one carries a radio transmitter, so scientists know its position, as well as its movements and sex life.

And speaking of the sex lives of kakapo, please do not miss this video (click here to see if reading in email).