Dinner in Carmel (Not As Simple As it Sounds)

Today I'd planned on writing about Highway 1 and its disparate personalities, first gently meandering through tiny towns and then morphing into a four-lane freeway pulsing through cities like Santa Cruz.

When it's good it's very very good...etc 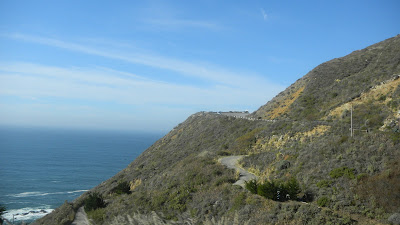 Instead, this story ends in a restaurant called Chinese Gourmet in Carmel.

We awoke in Halfmoon Bay to a shimmering sun, eager for the million-dollar drive to Big Sur. Even had a couple campgrounds sized up (in case Ventana was full). Our spot on Halfmoon here had a water view, but in the context of an unusual RV park. More on that in another post. 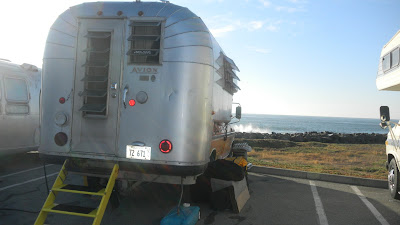 Our drive was superb (avocado sammos for breakfast), first on the shy twisting Highway 1 and then making some time on the same road in its Dan Ryan mode and looking to stop somewhere near 1:30, in time to soak up sun, walk a beach, and breathe the sea air. 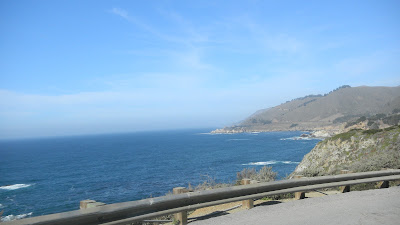 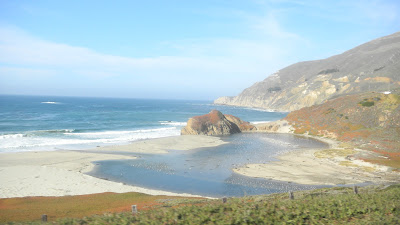 Less than a mile outside Big Sur we turned off into a steep drive that plunged downward into a ravine toward a potential campground on a rushing river, but too chilly in the redwoods, we decided. No problem, as I had two more possibilities on my list.
Art turned over the monster 460 cubic inch Ford engine and we pulled easily back up the hill and got more than halfway out onto Highway 1 to make a turn when the power steering hose ruptured, killing the engine and starting a small but seriously smoke-producing fire under the hood. Oh, and the engine died. On Highway 1, which this holiday week is like rush hour on Division Street.
Don't ask how Art backed off the road (he put it in neutral and it rolled, backward). Another three feet and...recall the steep ravine? Anyway, sad boy here, but your correspondent was deliriously happy to be off the crazy-busy road and, too, not at the bottom of the ravine. 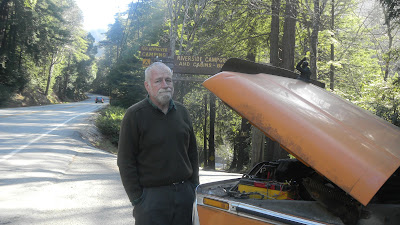 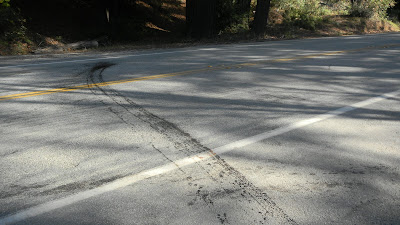 That's Highway 1 in its tiny, unassuming costume right there, ravine two inches past our rear wheels. 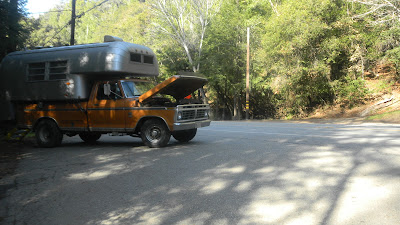 You know the ensuing drill: After lighting candles at the altar of AAA, Art walked down to the office to use a phone, and I stood guard. When he returned, that funny thing happened that happens any time a Ford truck has its hood up: a bunch of guys ended up under it.
First, Pasquale there on the left, rubber gloved and using a flashlight while Art turned over the engine. Nice guy--he was awaiting a client who was down in the campground. 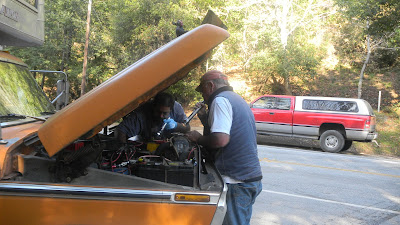 Then another guy in red cap who stopped to see if he could help. 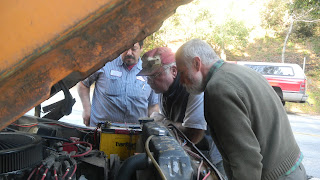 And finally a California state trooper. Pasquale confirmed Art's diagnosis, the nice guy in red cap started talking about his photography course, and the state trooper answered questions about the gear on his cop car. And everyone talked about our conundrum, offering advice on which town we should be towed to and what town might possibly have a motel with a vacant room (again, the holiday week is jammed). 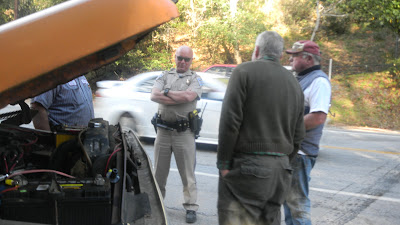 Soon the capable Drew arrived from Triple A, positioning his truck partway down the steep campground drive and guiding Art onto the ramp. 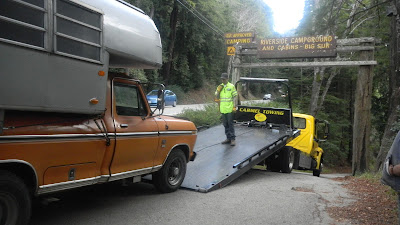 And suddenly the daylight--which had been all wrong for me to shoot pictures when we were heading south--was perfect. So consider this series courtesy of AAA. Plus, Art got to enjoy the scenery a little more as a passenger as we headed back north to Carmel, not a bad choice for being stuck overnight (Big Sur is the antithesis of a Big Town, without even a service garage). 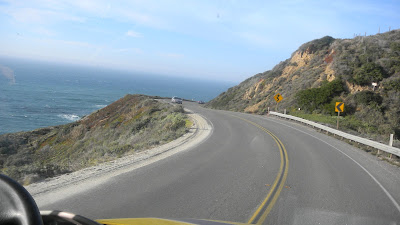 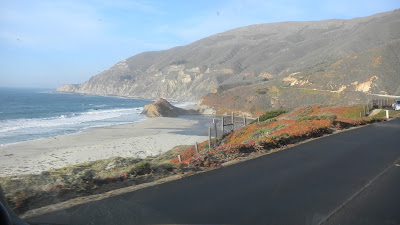 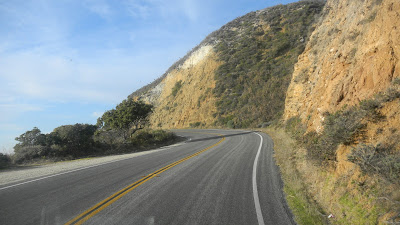 Drew said he'd grown up near Carmel, and when I asked if Clint Eastwood had been mayor or I had dreamed this Drew confirmed, noting that Clint had been mean to him when we was 9 and asked for his autograph. Meh. 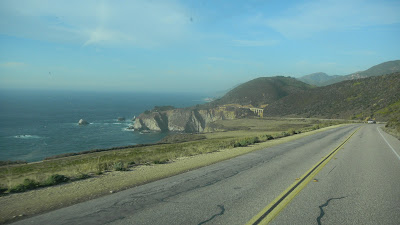 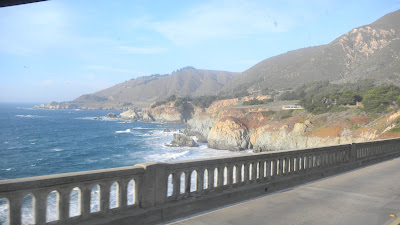 Carmel seems like a perfect little town out of Rod Serling's Twilight Zone imagination, a place where even the service garages don't look like anything of the sort. 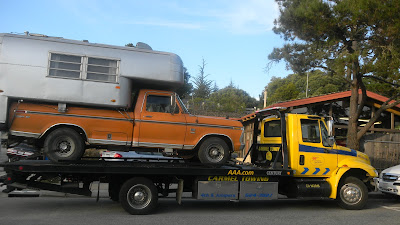 We said goodbye to the Avion, leaving it to an energetic young mechanic who lit up when he looked under the hood (a real truck to work on!), and walked a block to the Carmel Inn. We needed a shower, but we needed food more.
Quiet nightfall, laughter and tinkling glassware coming through the doors of a charming French resto. Campers need not apply. Off to the welcoming Chinese Gourmet, with tasteful window boxes full of trailing begonias. Hot and sour soup can change the day.
Posted by H2 at 5:55 AM