Fresh-Air Stops on the Amtrak Journey 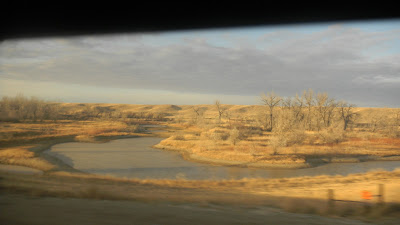 A very few times per day the conductor will call a fresh air stop or, if you prefer, he says, the opportunity to partake in some fine tobacco products. These are the only times you're permitted to leave the train, unless you're disembarking. When the sun is shining as it is in the picture above, taken from the moving train, these stops are brief chances to soak up some clear light. 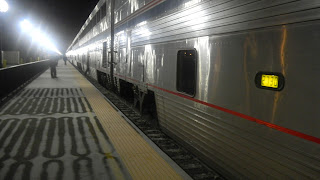 Often, though, the longer stops occur at night, as in this shot. This station had radiant heating under its platform to melt the light snow that was falling. It’s always worth bundling up and stepping outside to take some air regardless the weather, and on this ride it’s downright cold and often snowing along the way. 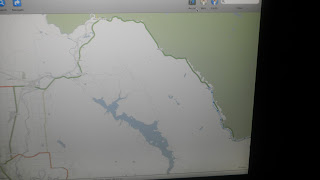 Mr Technology (aka Art) has stuck a GPS receiver on the window of our sleeping compartment and connected it to his Mac. Here it shows (click to enlarge) the train's progress alongside the mammoth Glacier National Park, tracks following the road, shown in green.

I learn a lot of local history on these stops from Joe, our sleeping car attendant, and delve deep into the personal struggles of fellow passenger Francis, who shares stories of his life as an industrial designer and why he believes he’s been placed on a government job blacklist due to reporting one of his employers for selling to a forbidden country in the Middle East.
Joe and I nod sagely, taking in the night.
Posted by H2 at 7:33 PM