We awoke to a new vista. Check out You the difference in the water after the night's heavy rain. It's difficult to portray, since I'd have to be in a boat out in the middle of the lake to do it justice, but the water came up very close to our wheels during last night's storm.

The river as a trickle...and afterward, moving along steadily. 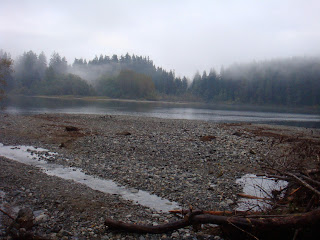 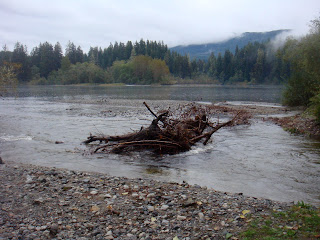 This Thanksgiving weekend is the last hurrah for many campsites in this area, after which the crews come in and cut, clean, and otherwise tend to the camps. We'll head for Youbou on Lake Cowichan today.

The guys from Victoria who gave us the salmon are welcoming other members of their weekend party, and we huddle for a quick goodbye and impromptu political discussion. They agree that the US is owned by corporate interests and tell us Canada is quickly following suit. We also learn from these experienced salmon fishermen that when rainwater hits the ocean, it triggers something in the brains of the coho and they begin to move upstream, at a rate as high as 10 kilometers per day. If they come to shallow streams, they wait it out for more rain, pushing pushing endlessly toward their spawning grounds.

Now for the drive on the newly-paved cross-island road, except 6 km is gravel where they've diverted traffic to build a bridge. Shaken, not stirred, we do OK. 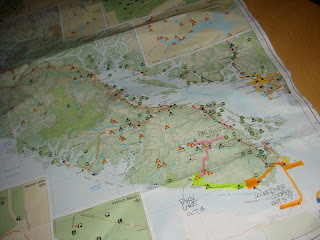 Along the way, I get my camera stuck in video and can't get back to still shots. At the Lake Cowichan visitor center a helpful BMW rider gets me straightened out. Many thanks to this nice guy, whose crew included a woman and an East German who'd shipped over his own BMW to Vancouver in a crate he made by hand (gotta love those Germans). 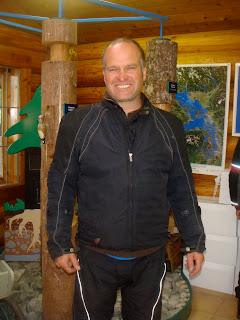 Here's some propaganda from the lumber industry in the women's room at the visitor center. I wonder if they take into account what happens to the atmosphere when you cut down all those trees. (And by the way, do you think I feel guilty sleeping in an aluminum camper built in 1965 and still in perfect, watertight condition? Aluminum looks like a real bad actor in this graph.) 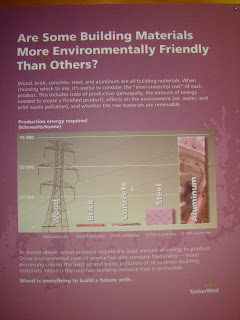 A fun tree display there. 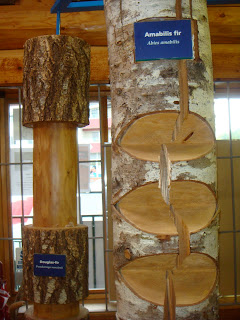 It hasn't stopped raining as we ice up, gas up, and drive around Lake Cowichan heading for Pine Point Rec Area. We look for dry wood for sale, but no luck. It's still raining as we choose a site. 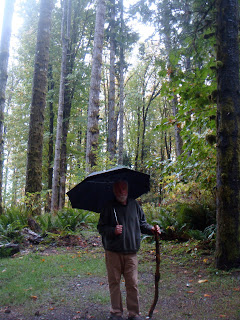 Art doesn't hold out much hope for a fire, but ever the optimist I ask a small group of campers who have a fire going (and more to the point, a bunch of cut wood under a tarp) if they have some to sell. A nice guy hands me a stack of dry wood, and we return the favor with a jar of honey. The bartering is going well. Walleye, candied salmon, and now wood. 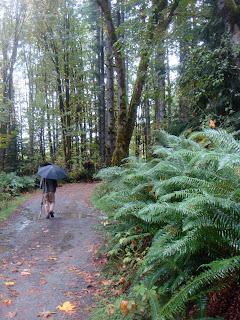 But it won't get burned today. The downpours are steadily periodic with tree rain in between, all rain making a beautiful melody as it strikes the Avion.

Time for a late lunch: onion, mushroom, and back bacon omelet with Herkimer cheddar (mom's favorite) + tomatoes from the Oregon farmers market. 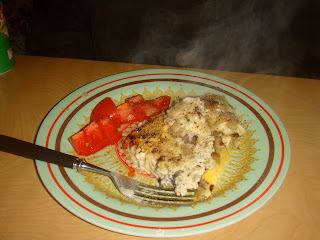 So what do we do all day inside when the rain doesn't stop? We read, we nap (well, Art does), we plot our next course. 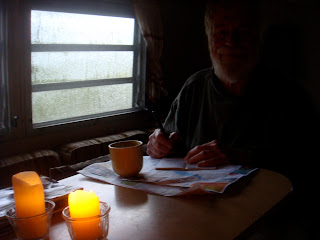 And occasionally we have a hot toddy. Somehow the cozy day drifts away... 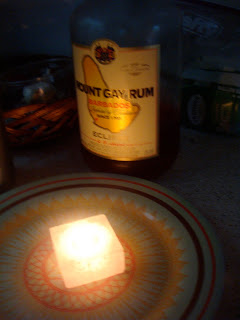