We awaken to the first daytime rain we've had since we pulled out of our Chicago courtyard on 9-11. Dark and moody, it's lovely. We're leaving this morning and when I pick up the salad SIP to load it I see an enormous slug munching away.

Art says: let's have it in an omelet. I say: let's go back to EdGe instead. 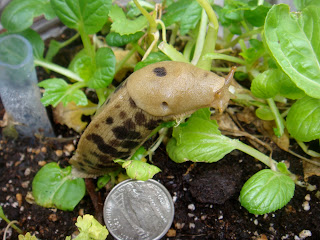 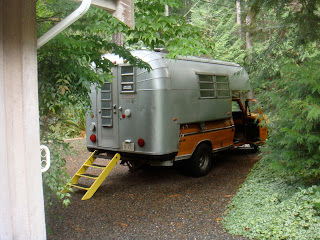 Gary and Meredith, warmest hosts ever, live next door in a house of inspired design. Originally a one-room cabin purchased 30 years ago, they started their life in that space (now this kitchen), with much more house built in the interim. 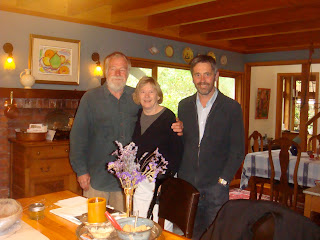 The kitchen has an extraordinary sink, here when they arrived, where they bathed their boys as babies. The cabinetry, made of ewe, is stunning. 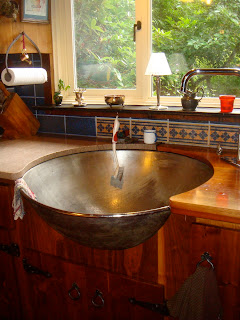 We could have talked all day, but our hosts are expecting their next guests from the morning ferry, so we decamp to Stick in the Mud coffee shop again, to update you and do some work, before hitting The EdGe again for lunch.

The morning vibe is brisk and funny. Nice people working here and coming in for coffee--moms with babies, older adults with friends, working folks with go cups. 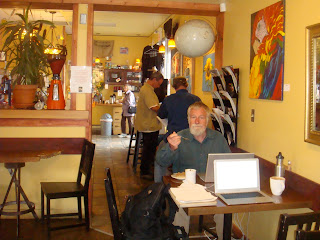 We're lucky to sit at a table self-reserved by a Scrabble player who meets her pals here to play every morning from 7:30 to 8:15. She made this unique piece to save her table. Holly and Carolina, my Scrabble pals: where are you? 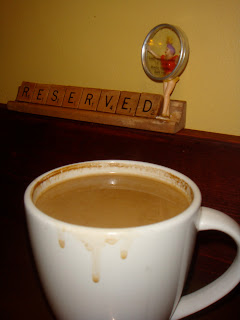 Just a block away, The EdGe is crowded today, and we snag the last table. Everyone who eats here tumbles over themselves with superlatives and we agree. All ingredients are handled with greatest respect by this magnificent chef...and aren't we glad he decided to step away from his high-end resto and awards and open a place offering food he himself would want to eat? 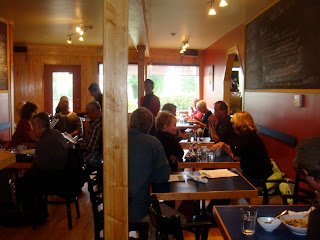 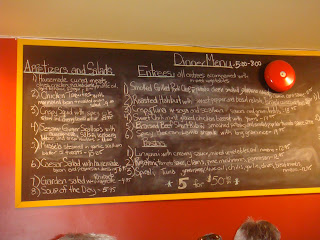 Today we share two lunch entrees: the crispy squid in Panko crumbs (best I've ever had, with a perfect ratio of extremely tender calamari to coating and a killer chili mayo dipping sauce) + slaw, which Art orders with the creamy squash soup. Oh my. 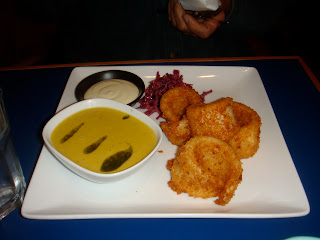 I choose the Kitchen Sink Bowl, described in the piece I linked to yesterday--a melange of homemade sausage, shrimp, squid, octopus, peppers, broccoli, cauliflower, and cilantro in a sweet-sour broth. Enormous depth of flavor. I can't stop my spoon... 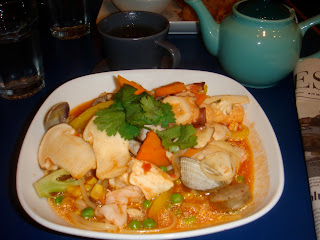 Dessert is crispy apple spring rolls made with tart fruit and served with whipped cream cheese and apple syrup + gelatin cubes derived from reduced apple cider. A tour de force and my idea of perfection: the assertive flavors touched with just a kiss of sugar. 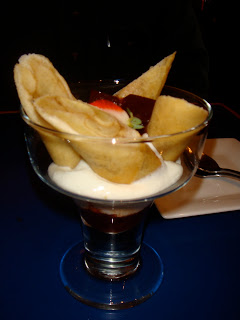 I liked the chef's tiny four-wheel-drive truck, which he also clearly sometimes drives to work. 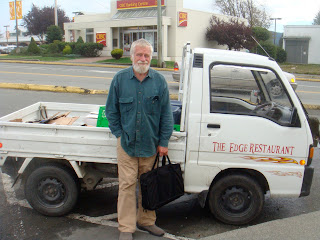 Art never met a resale shop he didn't like. Posing in his new heavy cotton overshirt. 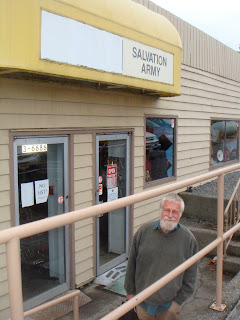 And on to the plebeian requirements of life, including a grocery stop--always more fun on the road. Many of the same products we have, but others differ, and certainly the whole BPH discussion is sidestepped when soup comes in cartons instead of cans. 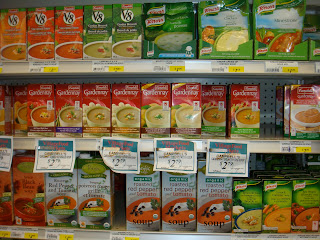 We're finally on the road about 3 pm, not really realizing how late this is to be starting out (it's October already?) and not have a campsite in mind. Suffice to say we pass up the first campground on this gorgeous coastline because it isn't on the water and we probably shouldn't have. (Experienced campers will detect a backstory in this phrasing, which we can discuss over cocktails...).

With coastline made up largely of the Juan de Fuca Trail, it's a beautifully foggy drive. But it turns out most of the map's camp indicators along this stretch are for tent camping, reachable only by hiking in. 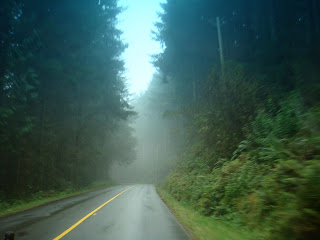 Finally we land, at Fairy Lake Rec Site, the last weekend it's open. 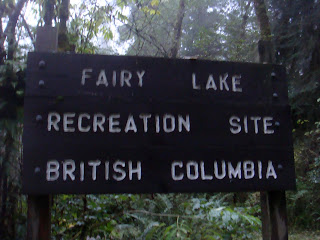 Look at these pictures of the fog hanging nearly down to the ground. The camper is parked near the gravelly shoreline of a river/lake combo. 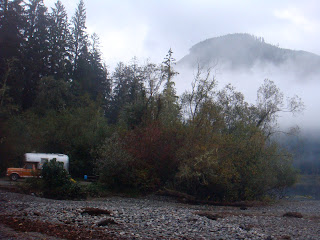 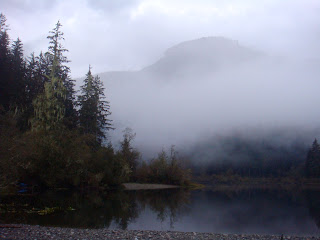 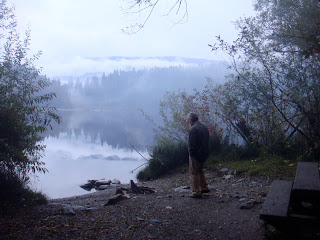 As above, so below. 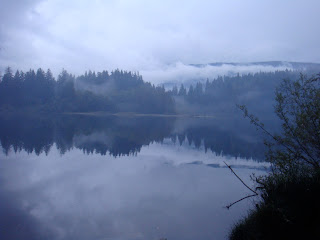 We had quite the excellent welcoming committee from these smart tradesmen who were setting up at an adjacent site for a Canadian Thanksgiving long weekend of fishing. "Chicago!" they exclaimed, when we said where we were from.

Later they brought us a gift to say welcome, stopping by with candied salmon caught just a week earlier. And we passed a little Chicago rooftop honey their way.

One of these guys was telling me how the gravel bar outside our site would change with just a couple inches of rain, the tiny trickle of the creek turning into a roaring river that would bring with it the coho salmon from the ocean. He tells me: they close these sites after this weekend because they flood out. 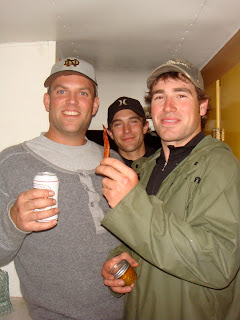 And folks, about two hours later it begins to rain, a pounding torrential downpour. I start to envision that tiny trickle of a creek turning into a roaring river and flooding our site, which is not far form the gravel, remember. Lying in bed, I wonder if the truck and Avion will float as effortessly as those cars appear to do when the city and suburbs flood.
Posted by H2 at 5:55 AM