We awaken Monday in Nehalem Bay State Park to a pounding rain. Then, silence. Then another wave of it. And again. The clouds are dark and moving stealthily off the raging Oregon coast. We pack up during a sunny break and we're on that killer road again, rocks meeting water. Jeez, it's a dream. 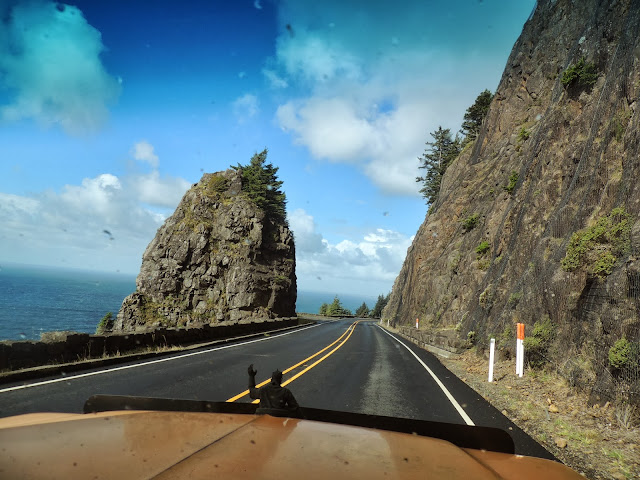 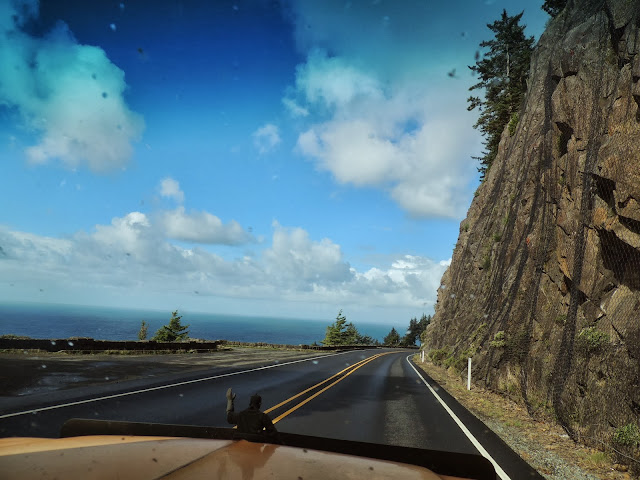 A quick turn left off the main road and we're checking out Hug Point State Recreation Area, just off 101 north. My map says there are campgrounds here, but sadly it's wrong. 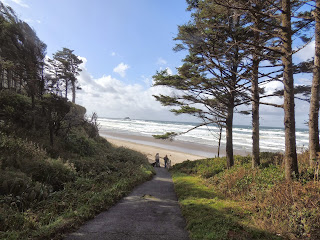 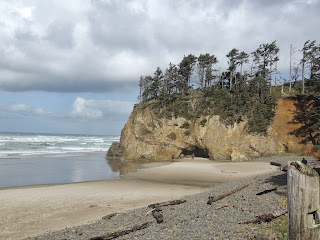 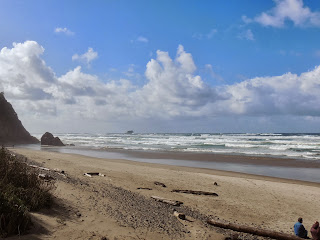 We meet Abby the rescued schnauzer from Alabama and her friendly guardian, who with her husband is on a 9-week holiday. They started out with the intent of seeing as many national parks as they could (cue the sad horn). But they're having fun. 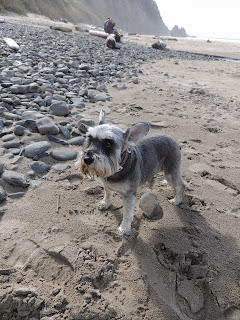 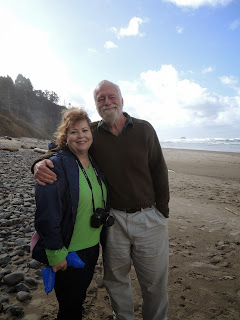 Taking a moment to stand in the cave, which had an unusual and persistent vibration from the water breaking onto rock. 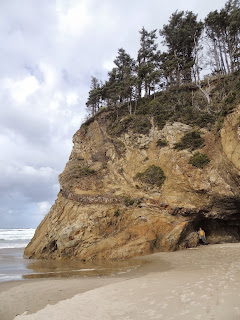 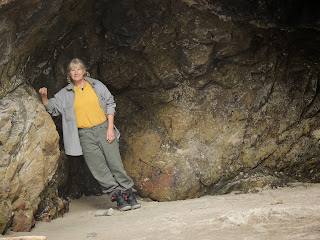 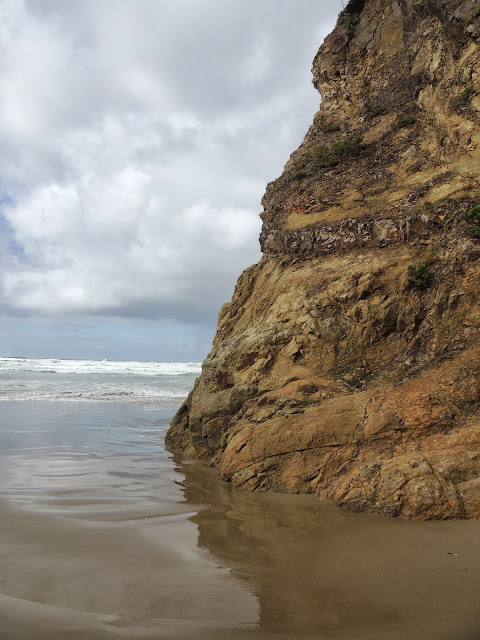 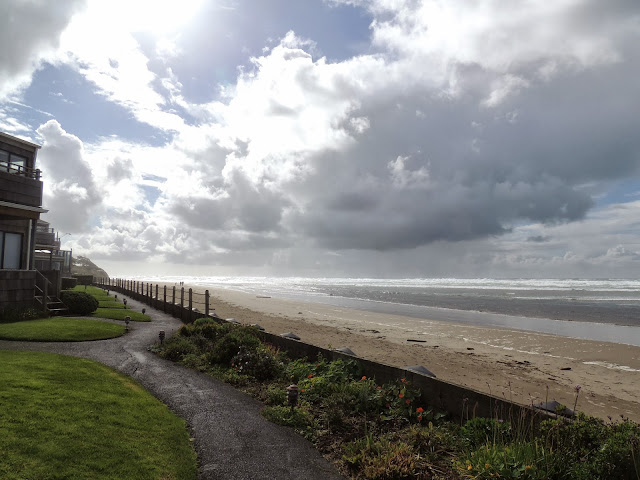 The City of Cannon Beach is located on the Pacific Northwest Coast of Oregon, 80 miles west of Portland and 25 miles south of Astoria. Cannon Beach is surrounded by the rugged natural beauty of forests, ocean beaches, and rivers. Only four miles in length, and with a population of 1,695, Cannon Beach is a popular and picturesque resort area, playing host to an estimated over 750,000 visitors annually. Although Cannon Beach was incorporated as a city in 1957, it has been occupied much longer: first by native cultures, and then, since the late 1800s, by American settlers. In 1806, Captain William Clark, of the Lewis & Clark Expedition, traveled south to our area in order to secure needed blubber from a whale beached near the mouth of Ecola Creek.

Here's our fancy campsite with a beach view, at The Waves Motel...and there are the iconic Cannon Beach rocks. 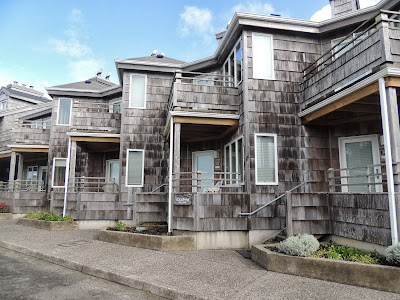 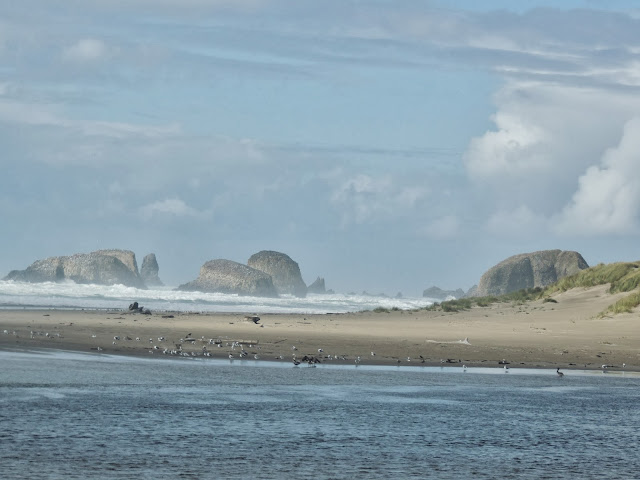 The gas fireplace ensures Art won't have to chop any wood, and I'm eyeing the bathtub. 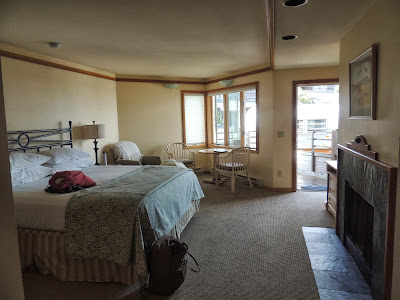 The town itself reminds us a little of Carmel, low-key signage, all tiny shops, plenty of fresh-roasted coffee, no sign of any big-box stores (I haven't done it justice in these pix). Our innkeeper recommended The Driftwood for lunch. 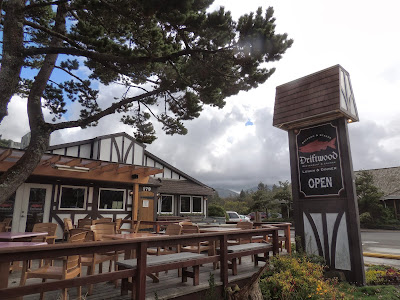 Good choice. Art digs into some velvety clam chowder while I work on my, uh, tomato juice (ha). 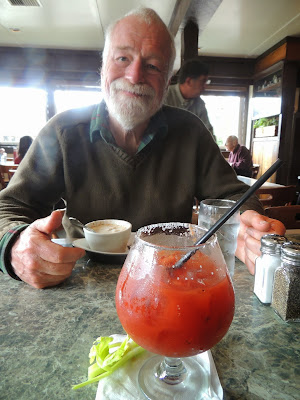 A couple of Dungeness crab dishes later, these campers are pleasantly sated. 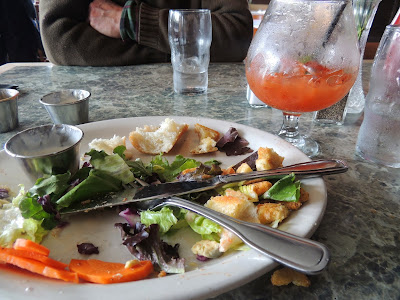 We stopped at Cannon Beach's all-volunteer library to check out the book sale. 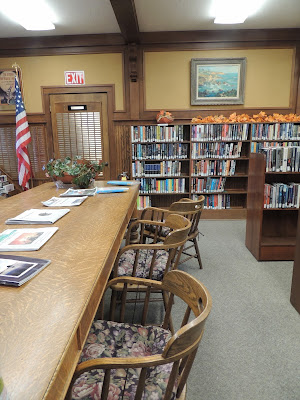 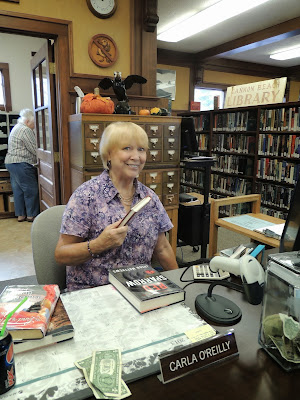 Tonight, the fireplace is lit and the Pacific is pounding just steps from our window.