Covid Cafe: A Garden On Loan 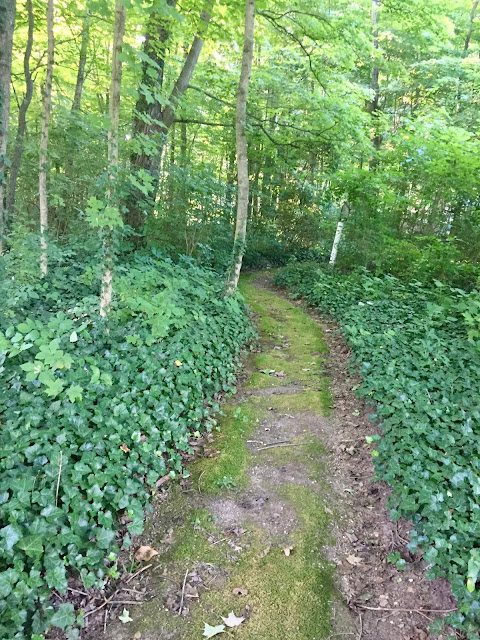 Good day to you all. At the end of our hugelkultur story, we were considering the foolhardiness of starting more seedlings than we ultimately had room for. You'll remember I unwisely questioned the germination rate of a bunch of old seeds. Apparently I kept them dry and they stayed vibrant. 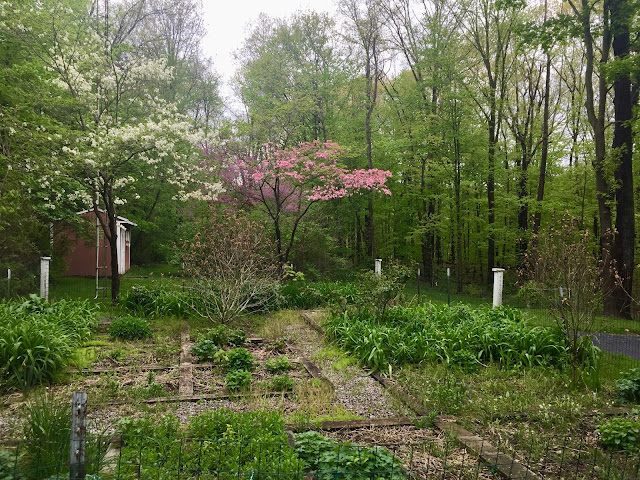 We had a lot of extra seedlings and nowhere to put them. Our friendly neighbors to the north had been held up in Arizona, where they overwinter, and I wondered if they would mind my growing in their sunny garden space. I wasn't even sure if they still used it.

I asked and they said yes 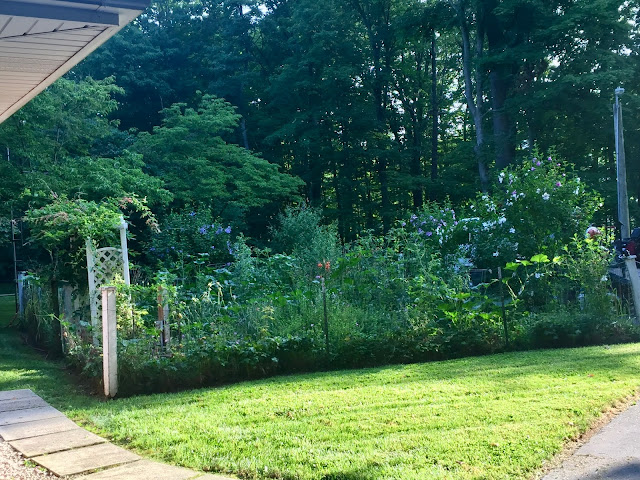 Rudy tells the story of the family garden. After Karin's aunt and uncle died in 1985 we sold their mobile home, removed the concrete, and converted that space to a four-foot square garden (because it had lots of sun). I remember struggling with railroad ties to make navigation and separate flower beds easier. Then we learned that creosote in the ties was toxic and we started to replace the railroad ties with treated lumber. 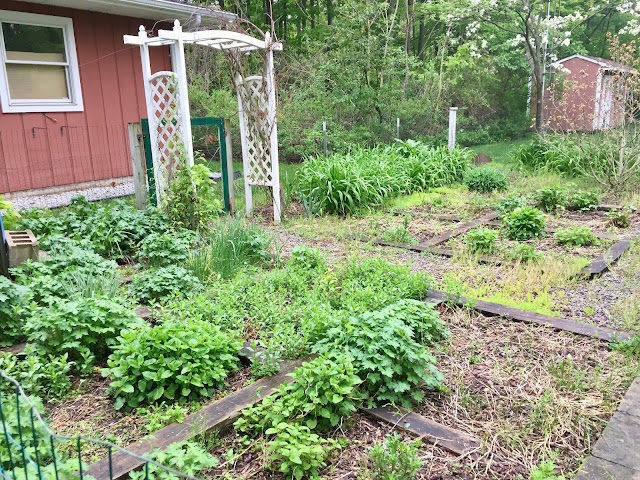 The early garden consisted of flowers that Karin enjoyed, mostly perennials. Always looking for flowers that attracted butterflies and hummingbirds. We also needed chives for our scrambled eggs for Sunday morning's breakfast. We grew rhubarb, chives, parsley, dill, and the mandatory tomatoes, which our golden retrievers learned to harvest. 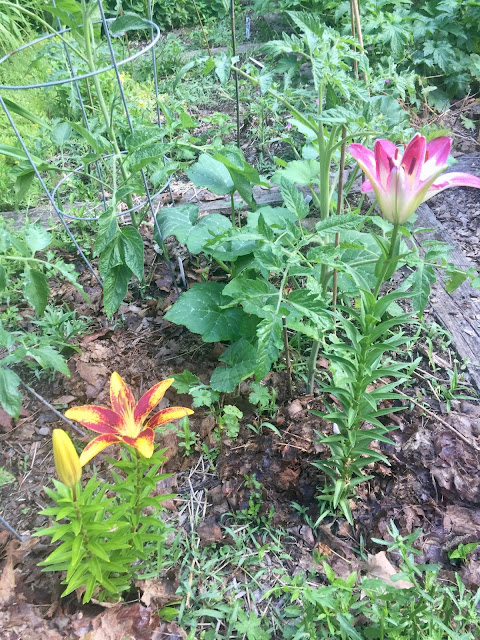 I enjoyed the cherry tomatoes, wiping the morning dew with your hand, and devouring a handful for a quick picker-upper before breakfast.
The garden was Karin's pride and joy starting about 1987. She would get bulbs and roots from friends and neighbors: Her boss brought her a 'Klunk' of Japanese Irises, from Montague came Wild Geraniums, our helper Andy dug up and planted a Butterfly Bush, Pat from Mishawaka donated a red hydrangea.

(Ed. note: Most people with gardens can list these enduring connections between people and the clump of whatever was shared. They make growing a delight. Here, the irises in the foreground, my position for most of early June at back.) 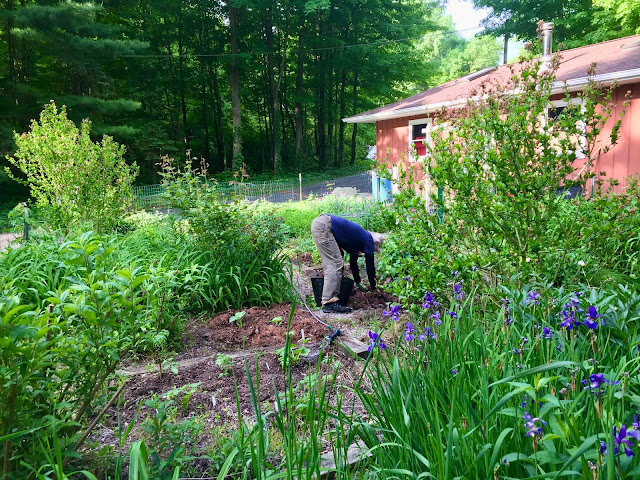 The Rose of Sharon bushes planted themselves except for the rarer blue rose we purchased at a local garden center. 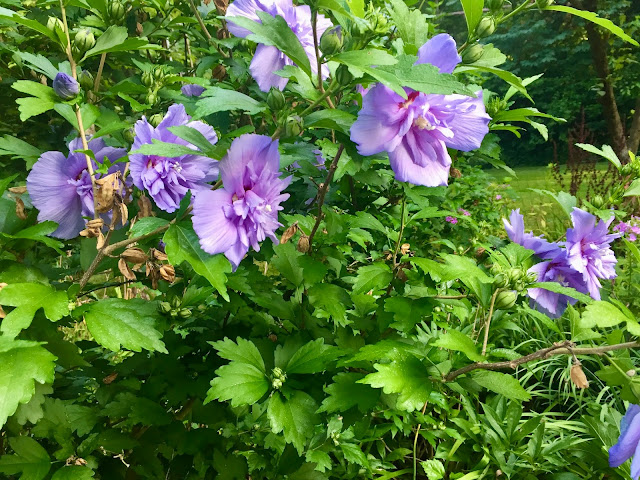 One interesting anecdote was an enterprising woodchuck, whose den was behind a woodpile about 12 feet from the garden. He dug a tunnel under the fence and flower beds to bring him right into the middle of the garden. He proceeded to enjoy all the vegetables and some flowers before we could trap him and dispatch him to woodchuck heaven.

(Ed. note: the hole is still there and here's my photo of it from early June.) 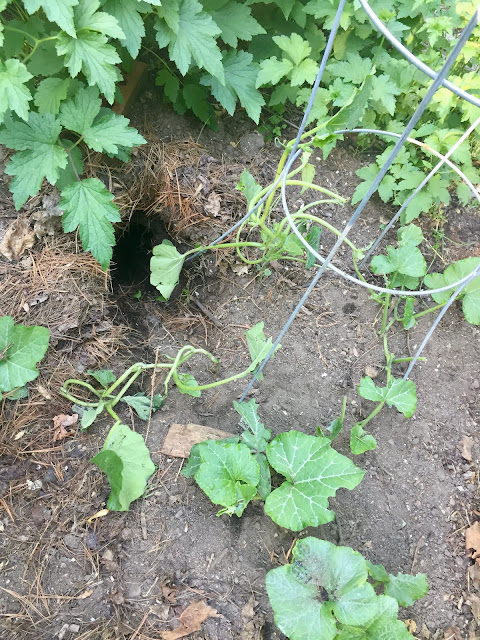 As we retired and traveled more the garden received primarily perennials and weeding it became a chore for the senior citizens.