There is so much to love about Golden Bay--open spaces, friendly folk, and vistas that redefine beautiful. Today we walked the Aorere Goldfields Track, a vigorous five-mile hike in the heart of the mid-1800s goldfields.
Edward James and John Ellis, two of the earliest European settlers in the Aorere Valley,  stopped by a stream while mustering cattle in October 1856 and James found a small amount of gold.

After three wrong turns on our way to the goldfields parking spot, we finally found a rough road in the right direction. 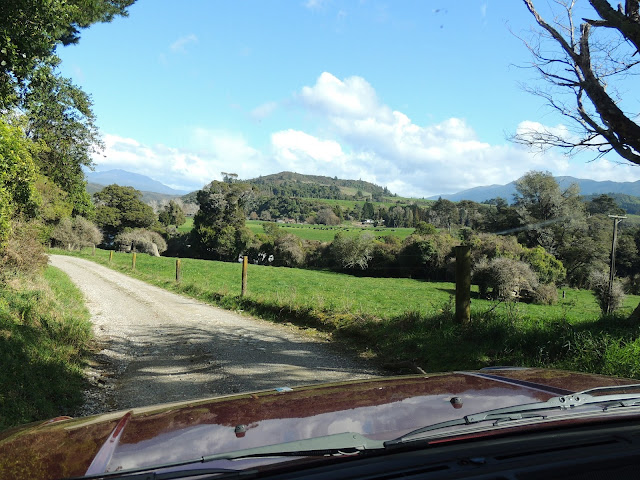 Just about every place in NZ is well marked, but when you're off the main path a mapping device is sometimes required. Tracks like this are a blast in the Rover. 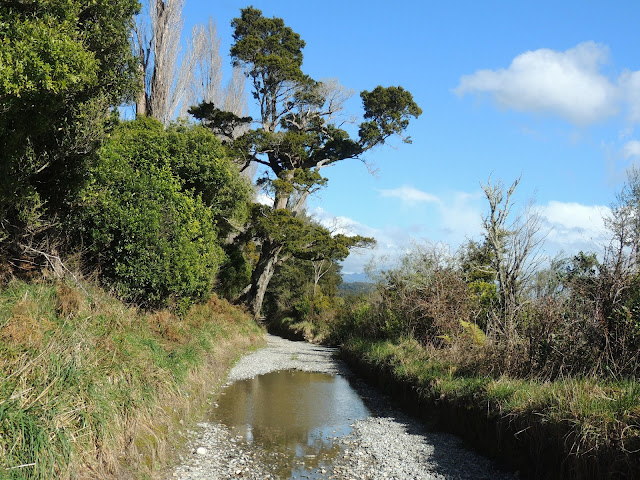 This hike is my kind of NZ escapade, since it requires crossing farm fields to get to the starting point. 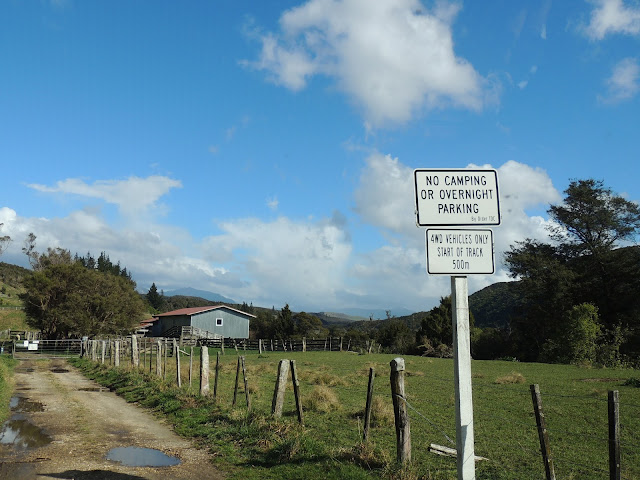 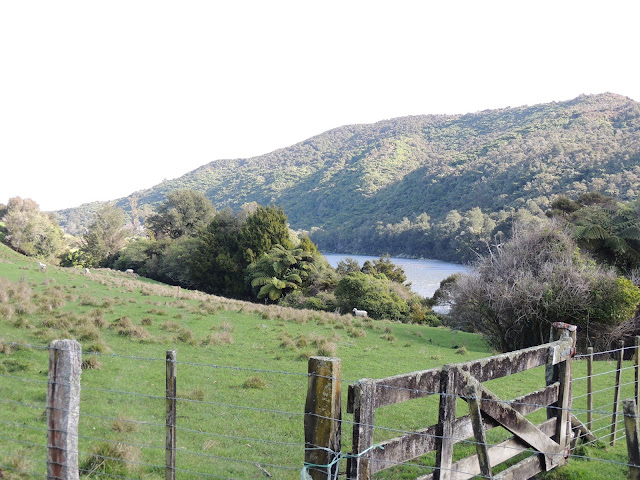 We spotted this intriguing tower--with a matching one on the other side--on the Aorere River, where gold was first discovered in the mid-1800s. Is that a zip line? Some sort of cart you attach and ride in? Only one line, so you can't pulley yourself back and forth. We never figured it out. 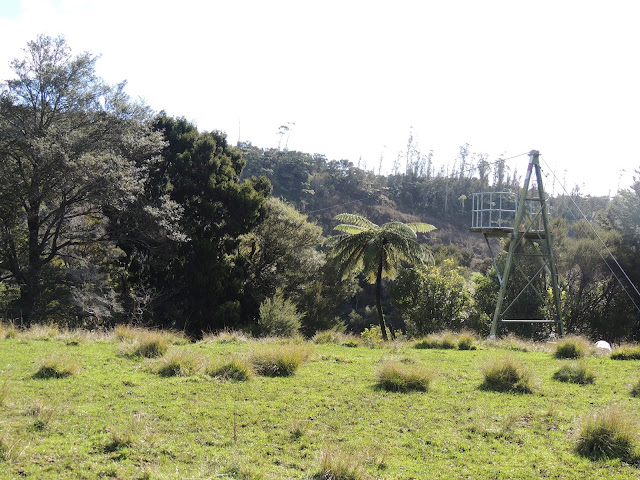 Today was really all about the light. Spectacular or not, these sheep want no part of us. 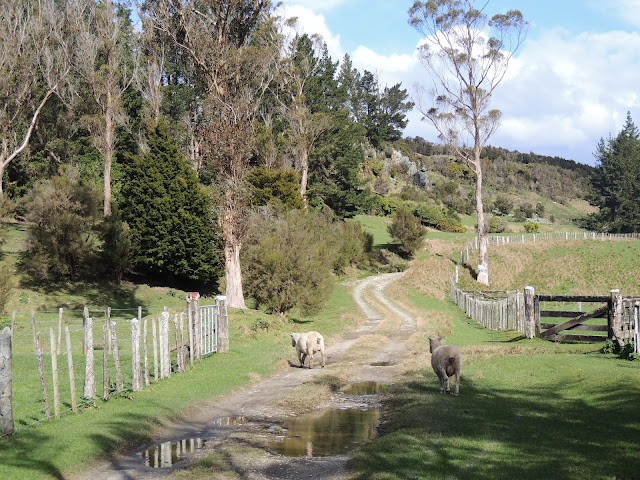 Getting to the head of the track was a walk itself. 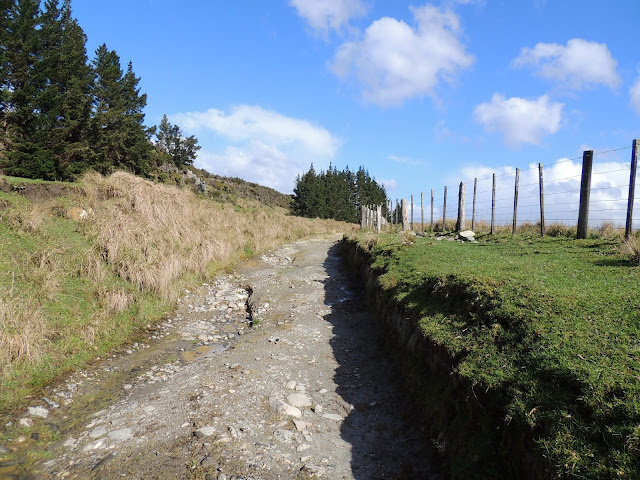 Prospectors worked the alluvial gravels of goldfields in the Takaka and Aorere valleys, with Ferntown  becoming a boomtown. The Maori settlement at the mouth of the river was known as Aorere, but the growing town there was known as Gibbstown, after William Gibbs who subdivided his land into sections for sale. 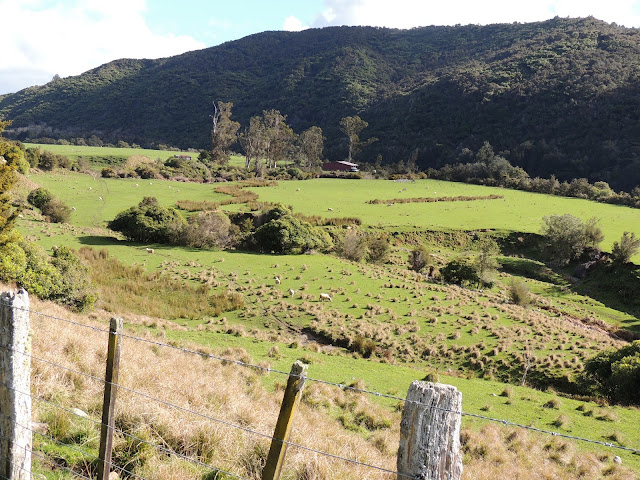 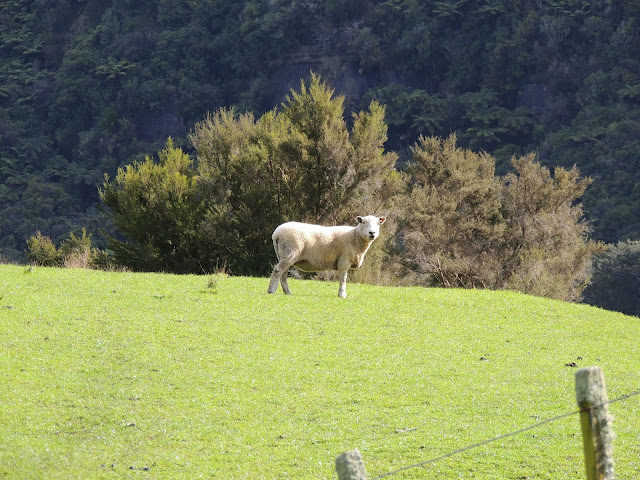 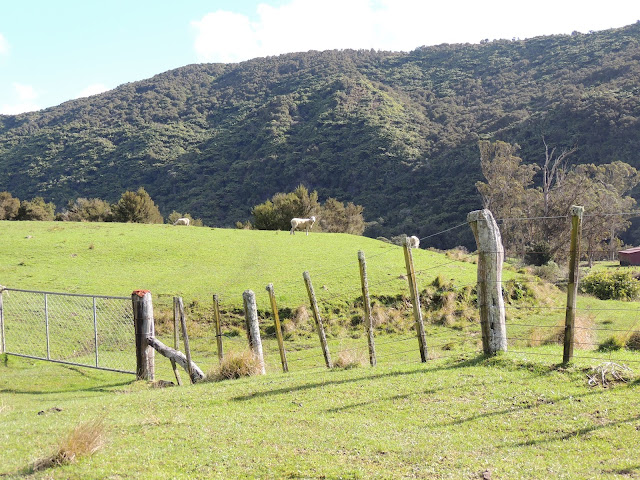 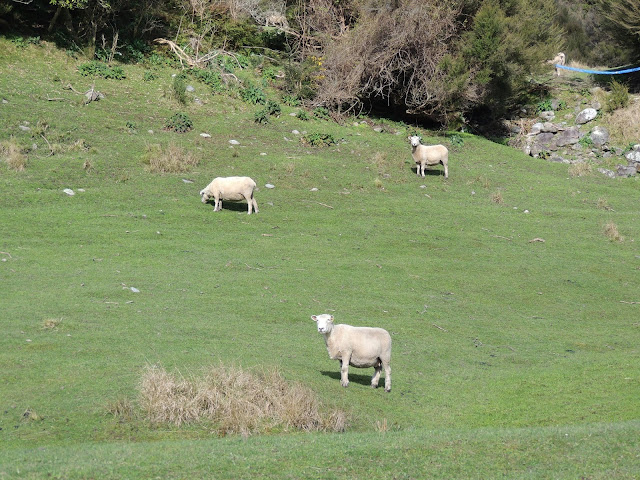 Because we got a later start, we didn't make it to the caves or dam

In 1857 the settlement consisted of just two tents, but by 1858 successive waves of fortune hunters had arrived. There were seven hotels, and the 1858 Census recorded 700 European and 200 Maori inhabitants. The rush proved short lived, and by 1859 the majority of prospectors had moved on to easier gold in the Buller and Central Otago.3 In September 1861, however, the Otago Witness optimistically reported: "...we have much pleasure in stating that Captain Walker of the "Supply" brought with him from Collingwood, during the last week, no less than 206 ounces  of gold....and that accounts from the Aorere state that all industrious men on those diggings are doing well." 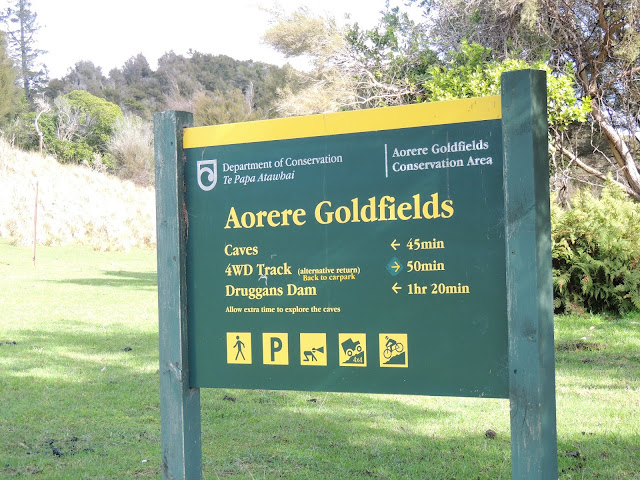 Traversing the pastoral is always my favorite part. 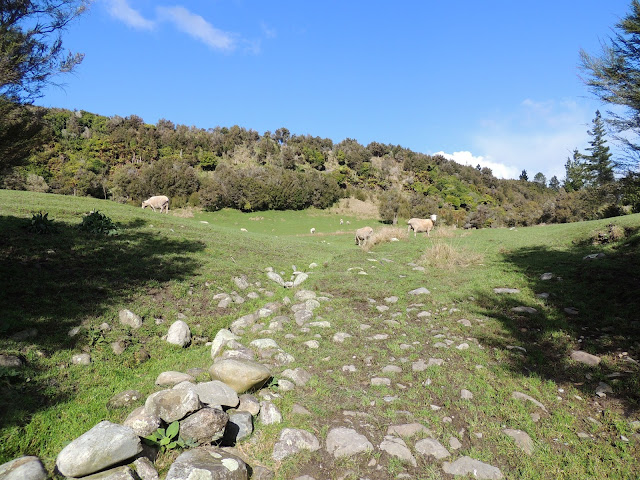 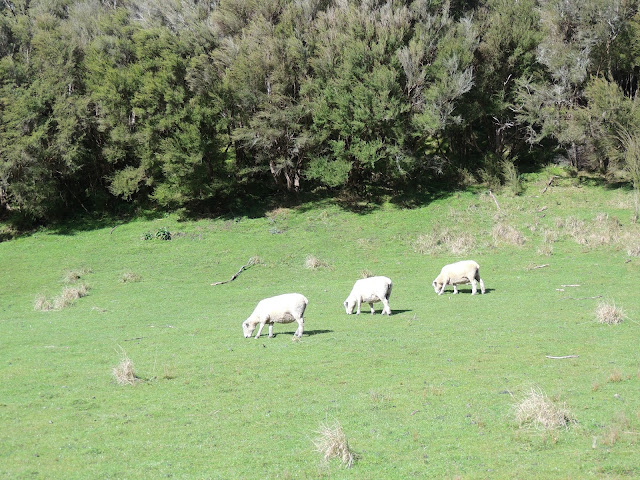 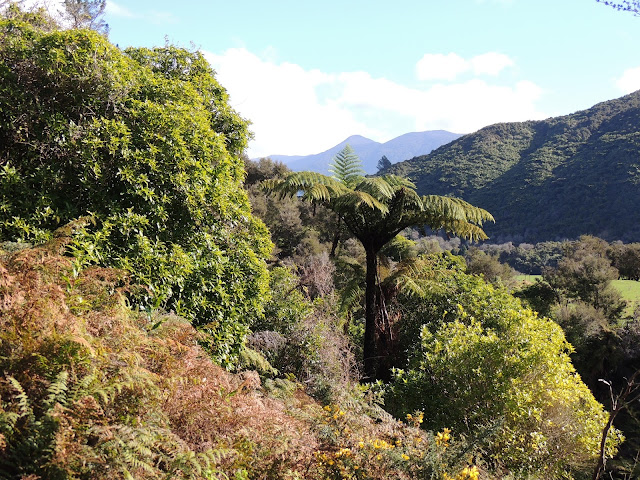 Finally on the edge of the grazing land, Art steps over the stile. Aren't they an ingenious way to let people in while keeping sheep out? 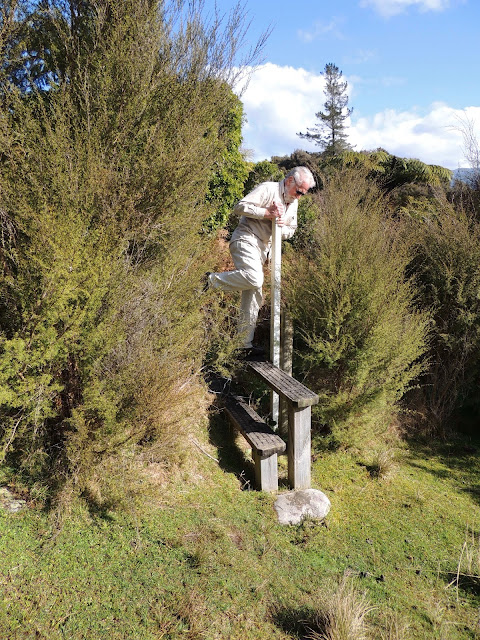 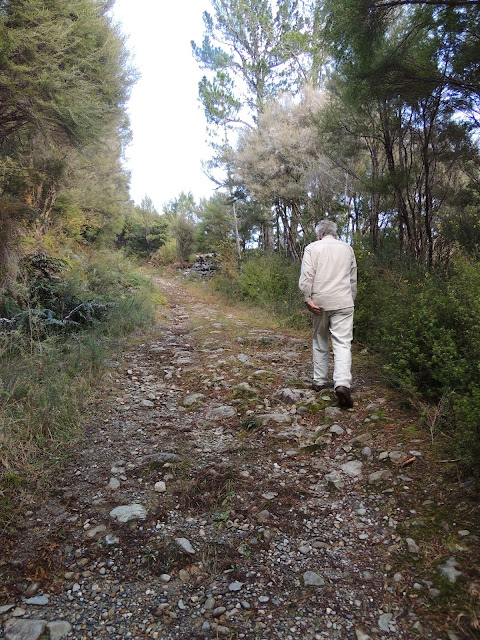 It takes a bit of imagination to envision the gold fields.
William Washbourn was one of many to head to the area from Nelson. With his 11 year old son Harry, William spent several months prospecting. Harry described the start of the gold rush as "a large camping picnic with everyone in the highest spirits, optimistically expecting to make a fortune." 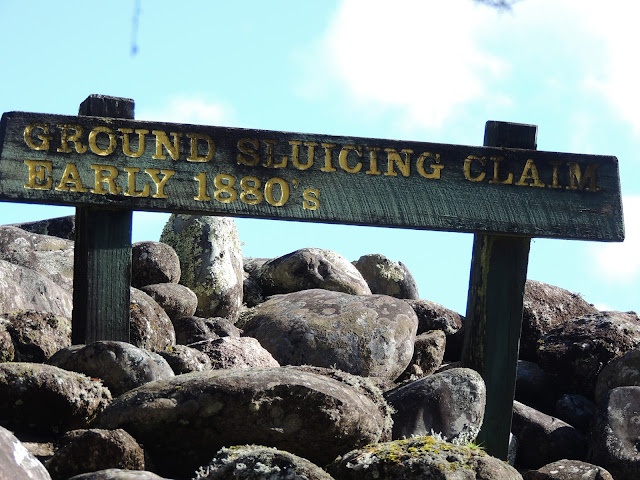 I am always fossicking with my bare hands, hunting for that gold nugget I know is here somewhere. 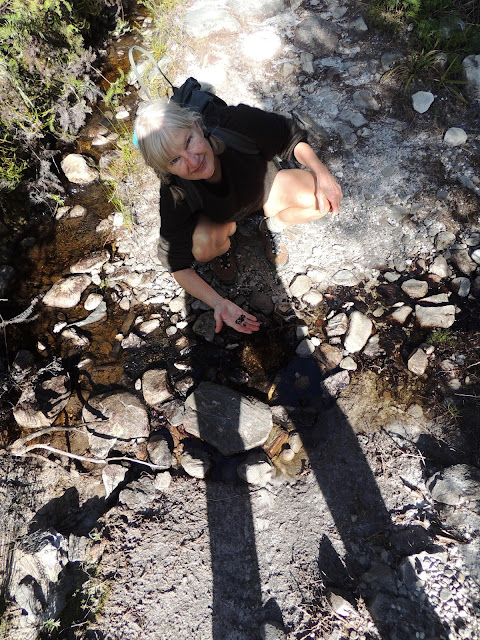 Manuka (from whence the honey) trees. 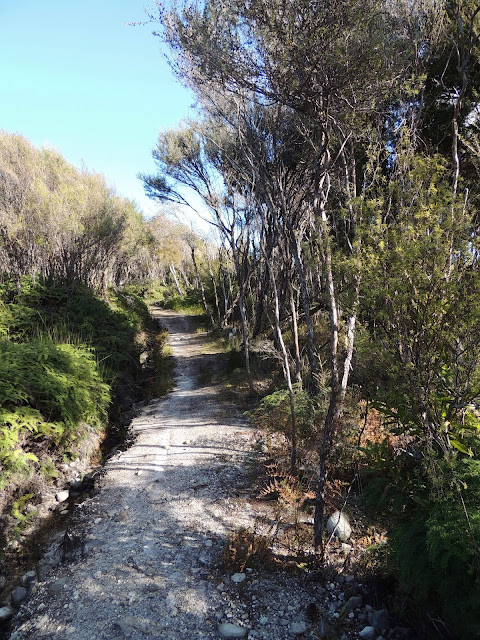 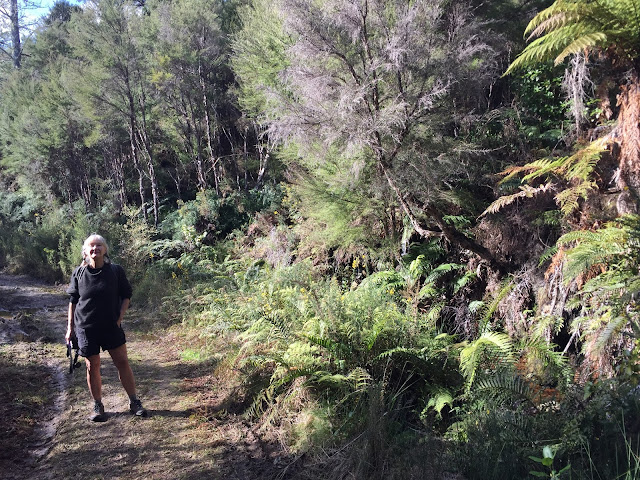 This is a three-hour loop trail but when we reach an overview it's time to turn back. 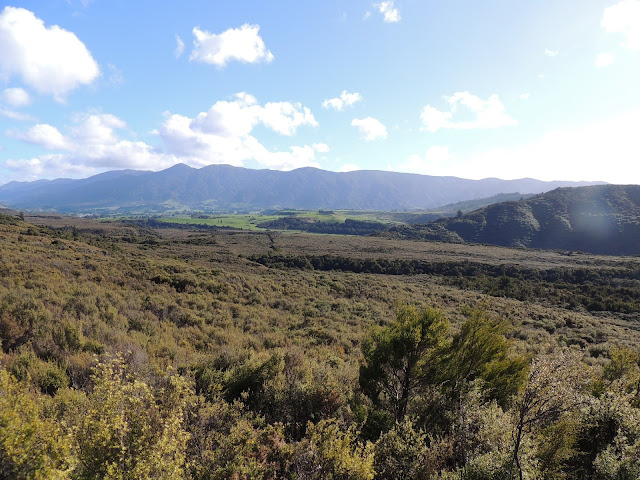 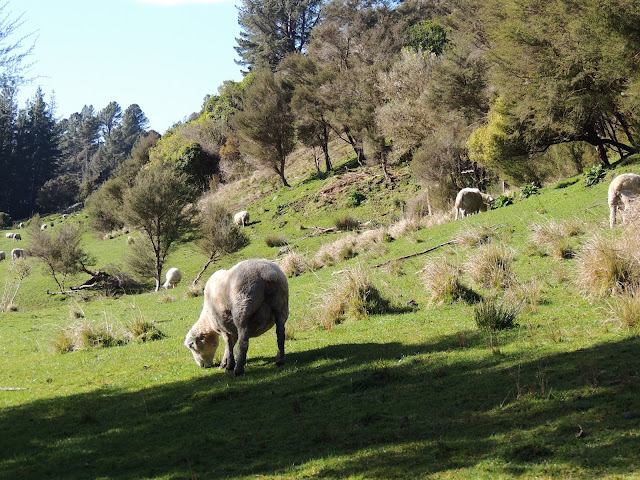 Art had a little slip in the mud. We've heard it's been the wettest winter here in memory. 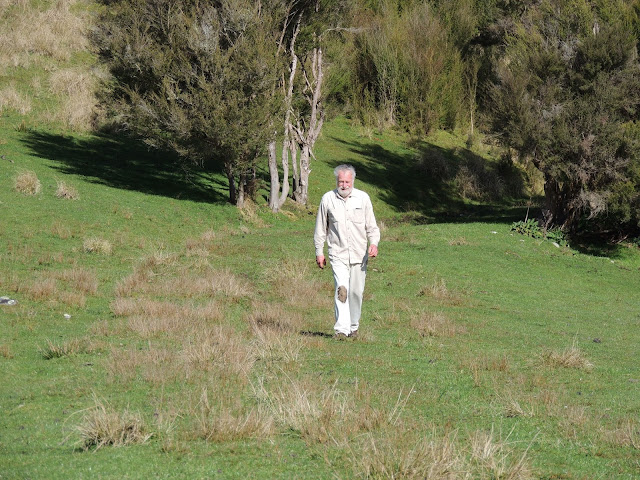 Post-trek lunch: duck confit on chard with kumara. This duck confit in a can is a camper's dream. Into the oven in its own fat for 20 minutes (it's fully cooked and preserved) and then a run under the broiler. It smells like Thanksgiving. 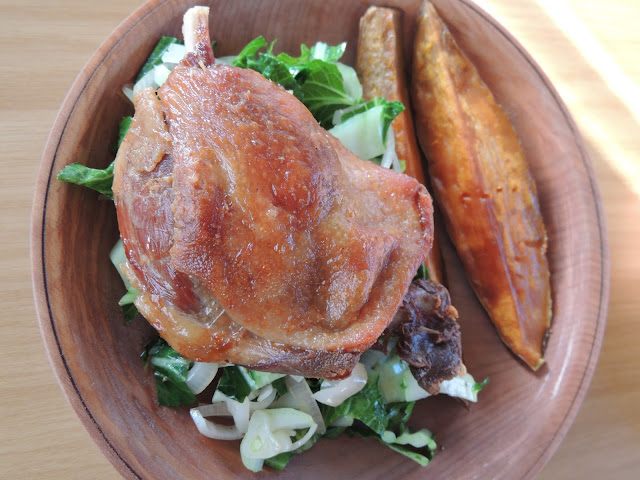 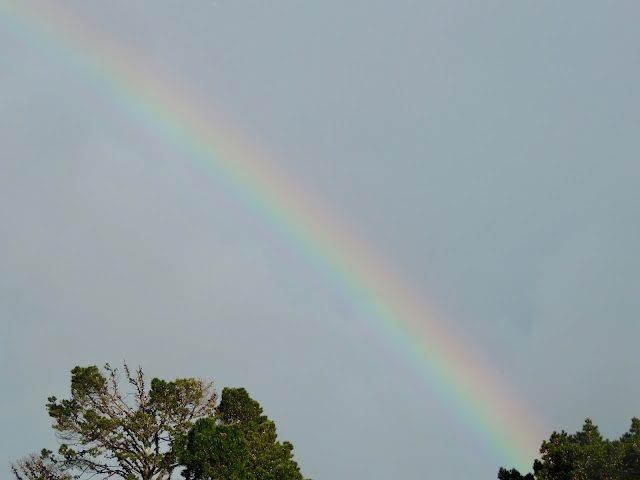