We're making a third visit to be certain that Golden Bay is one of the very best places in NZ. Getting here is not easy and that's part of what sets it apart in a sort of alternate universe, with a laid-back vibe, small population (4000 people in 2013), and views like this. It doesn't hurt that it's nestled up against two national parks: Kahurangi and Abel Tasman. 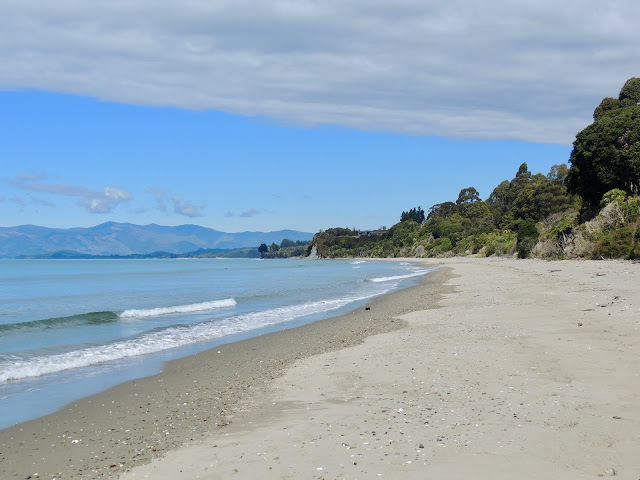 Fodor's says of the only road into Golden Bay:
The road into Golden Bay over the Takaka Hill rises 2500 feet before plunging again to sea level to the tiny township of Takaka. The road is a continuous 40-minute climb of twisting corners, steep drop-offs, and occasional passing lanes. Don't be tempted to check the views while you're driving. 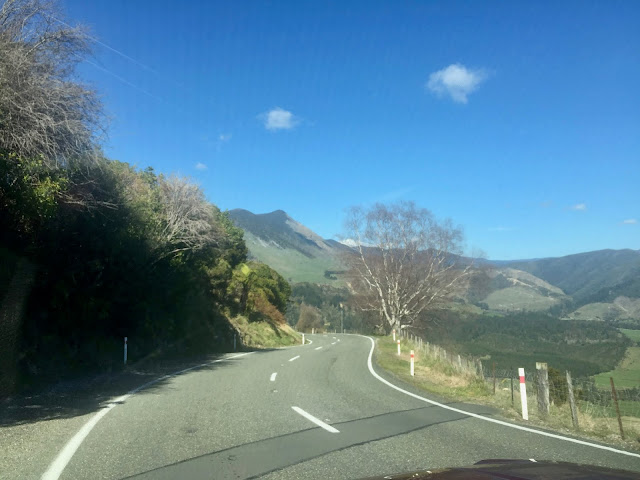 Art has much experience driving it--with a caravan in tow--and he's good at it. Today, however, we're not going over the Takaka Hill right away. The Feb 2018 cyclone that kept friends Alex and Peter from visiting this corner of NZ damaged the road so badly they're still repairing it. 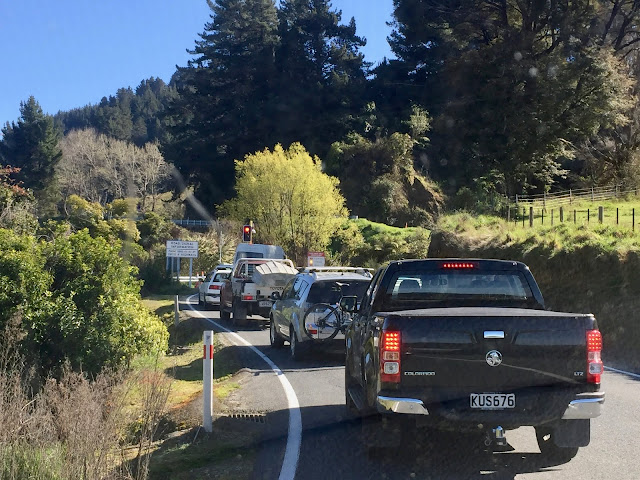 A brief pause before the ascent, new road work apparent. 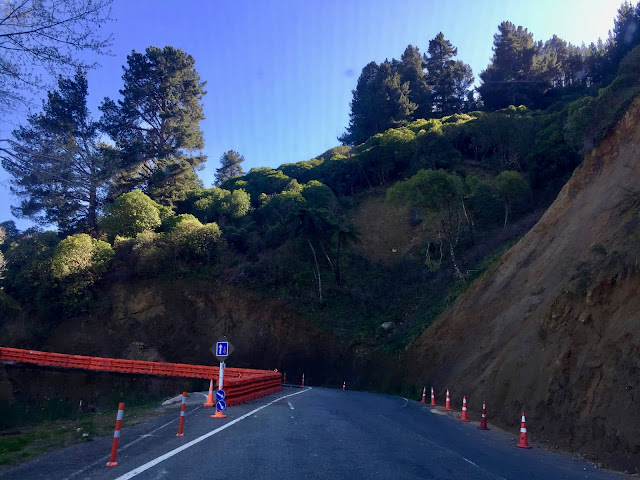 More on the cyclone damage...
About 6000 Golden Bay residents and tourists are isolated as ex-cyclone Gita turned the Takaka Hill road into "a river." Authorities said on Wednesday morning that State Highway 60 on the Riwaka side of the hill was severely damaged in several places by slips.
Golden Bay grows much organic food and hosts a community garden. We stopped for kale, eggs, and mesclun greens to go with the fish we'll be having for lunch. 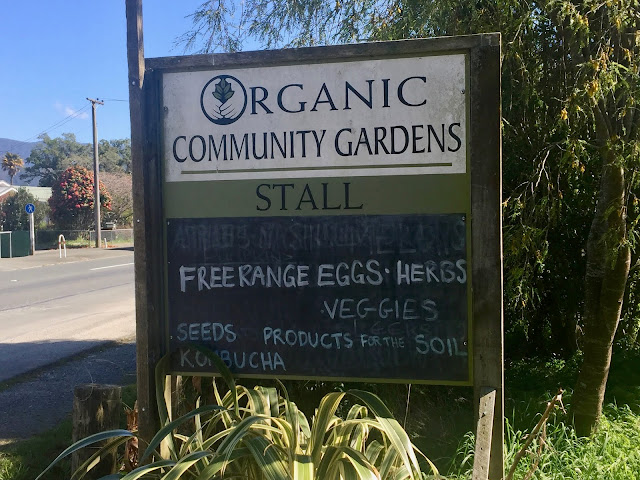 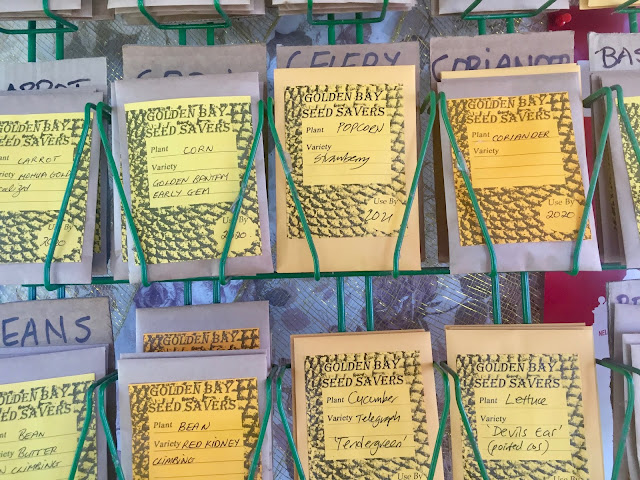 This memorable campground was up for sale as a seriously expensive lifestyle property in 2017. Happily, it didn't sell and continues life as a campground on a splendid walking beach. 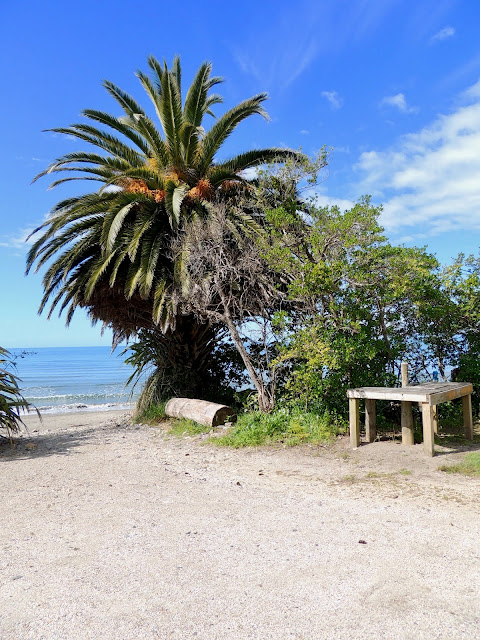 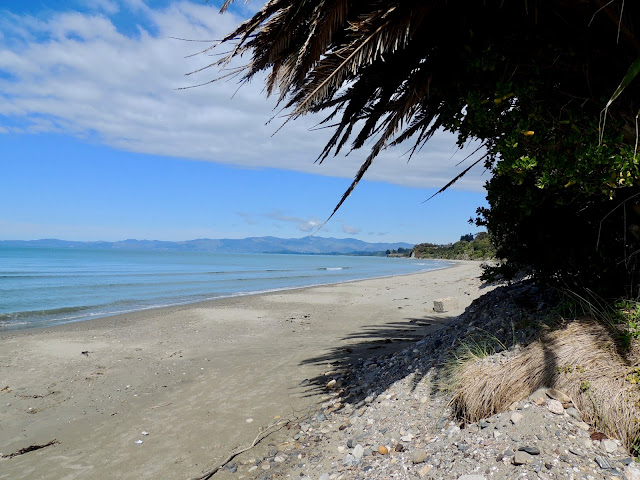 The map (click here to view if reading in email). See how the curve of Golden Bay up to Farewell Spit sketches a kiwi bird?
Māori lived along the shores of Golden Bay from at least 1450, which is the earliest dated archaeological evidence (from carbon dating) yet found. In 2010 an extensive scientific study was made of Golden Bay by a team from Otago University led by Associate Professor Ian Barber.[3] They accurately plotted and investigated a large number of early Māori sites ranging from pā to kāinga to probable kumara gardens that stretch along the coastal arc from the base of Farewell Spit at Triangle Flat, 60 km eastwards to a pā site 10 km east of Separation Point.

You've probably guessed what we'll be doing here, in addition to eating well. 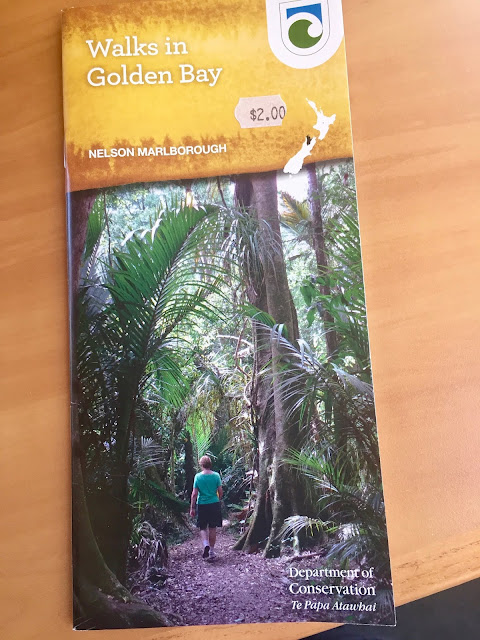 What a delight to find unsprayed fruits and vegetables again, mainly for the distinct improvement in flavor but also to avoid the health effects of pesticides. It's challenging to find anything but conventionally grown produce in many parts of NZ, especially out of season. 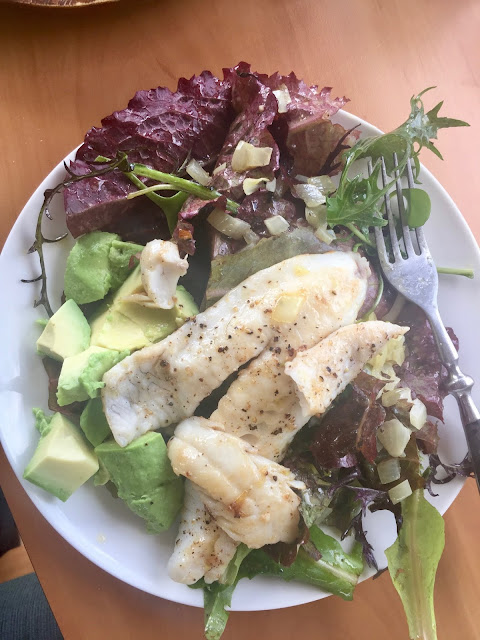