Oh, what a glorious place is Marfells Beach. Even in the pouring rain (tonight), the half light (this morning), and certainly the clear light of yesterday. Let's start there, heading toward Mussel Point to the south. 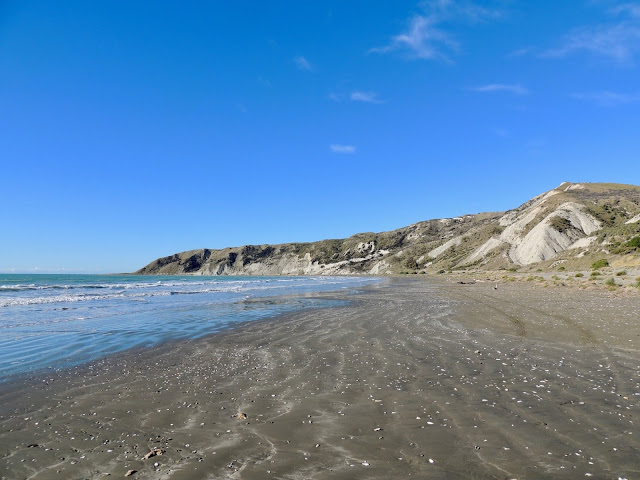 (Click here for a nice overview and good photo of this DOC campground.)

A sign on our walk shows how to navigate around marine life. 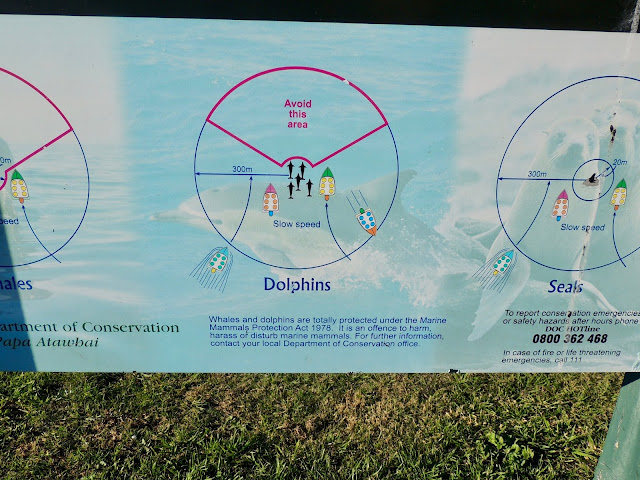 This sign warns against the taking of shellfish and seaweed. The top of the red band is here, Marfells Beach, and the bottom is Kaikoura, where we're heading next. In November 2016 a terrible 7.8 earthquake struck in this region, pushing the sea floor up four to six feet.

Click here for more...and to see the remodeled coastline.
It all happened so fast, the exposed sea bed was still crawling in sea life when locals discovered their newly remodelled coastline, and scientists have never seen anything like it. 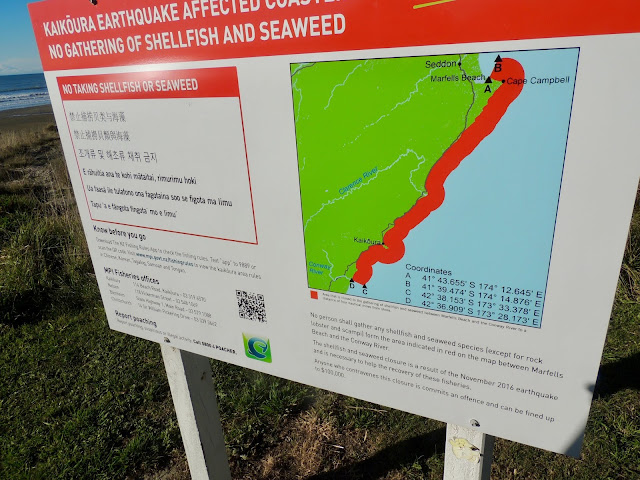 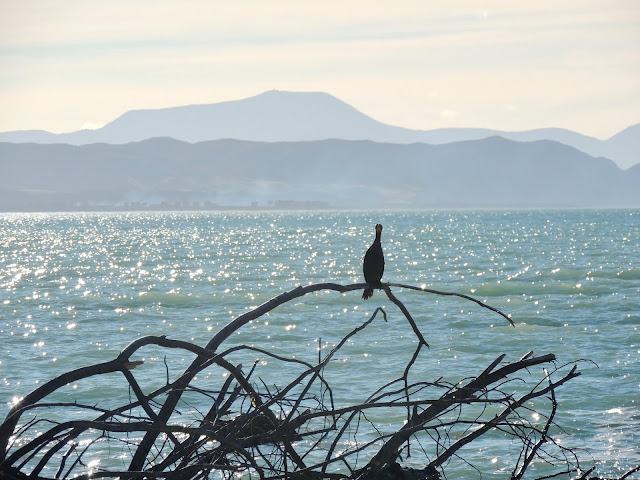 This man (whose name we later learned is Robin) was the only other person walking. He looked at me as he passed and said: Aren't we the lucky ones?

So I turned back and made his picture. 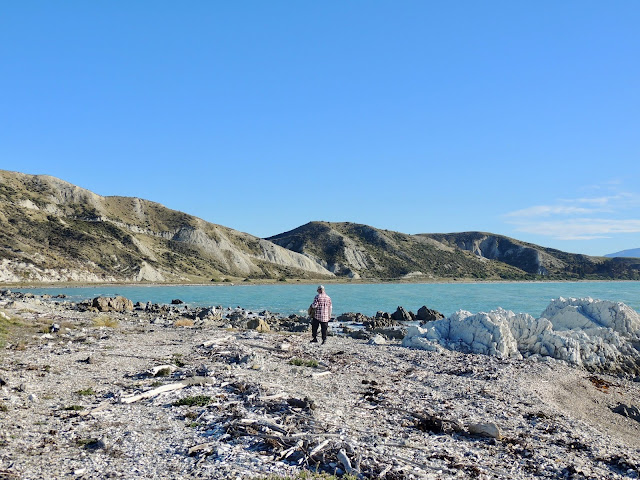 There's Art at Mussel Point and, in the far far distance, the 1905-era Cape Campbell Lighthouse, which can only be reached by walking this next crescent of shoreline during the tide-out phase. We're considering it. 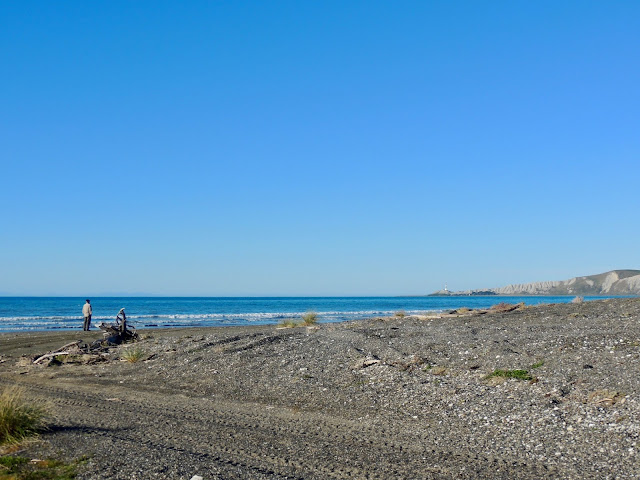 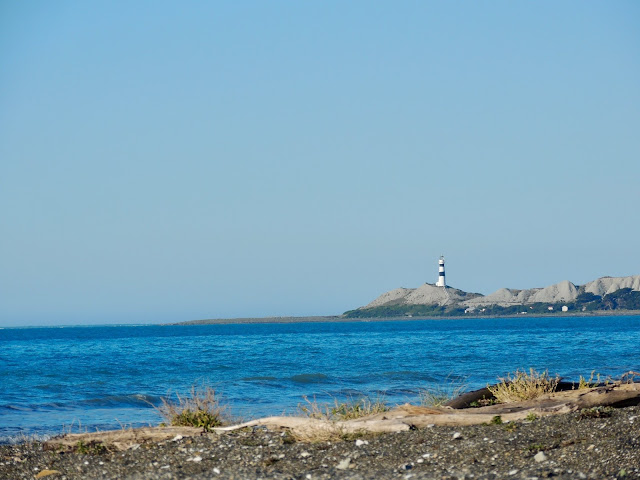 We talked to Robin more this morning as he's also camping here. He too saw these bleached aggregates yesterday and thinks they're part of the ocean floor that got pushed up in the 2016 quake. 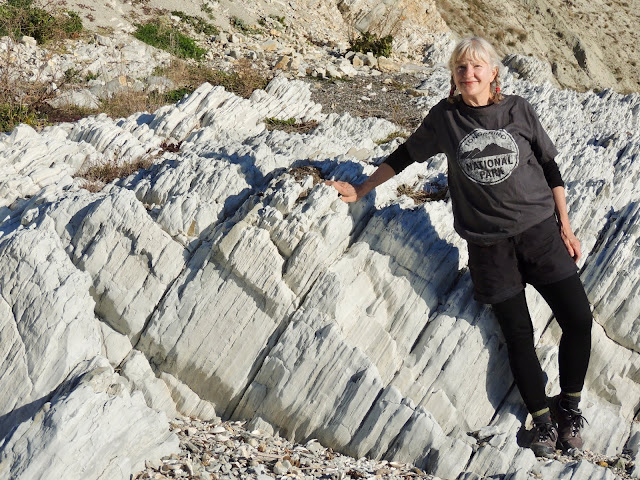 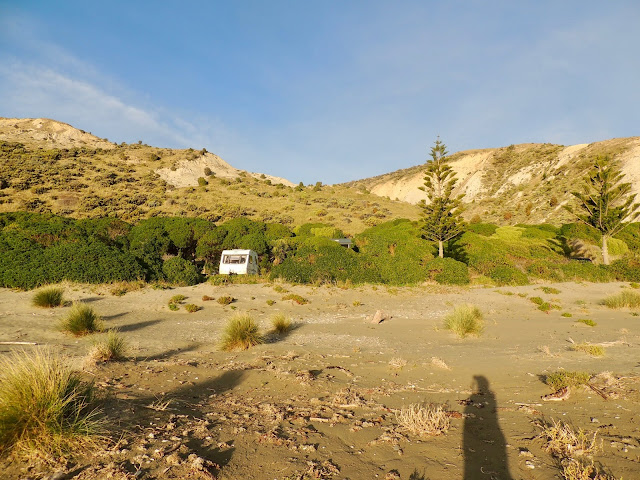 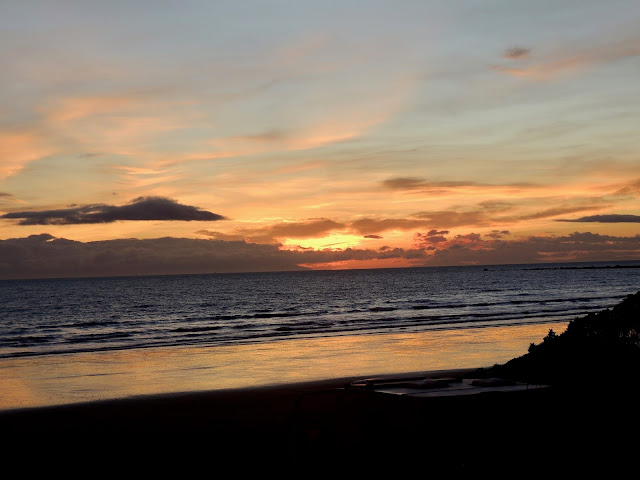 This morning we walked in the opposite direction. 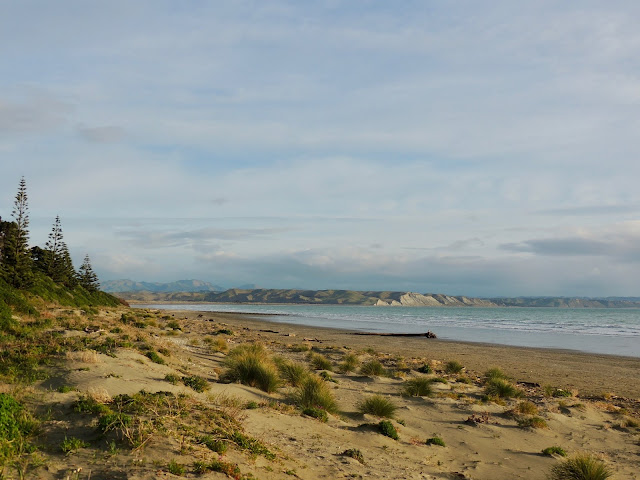 I zoomed in on these far mountains to the north. 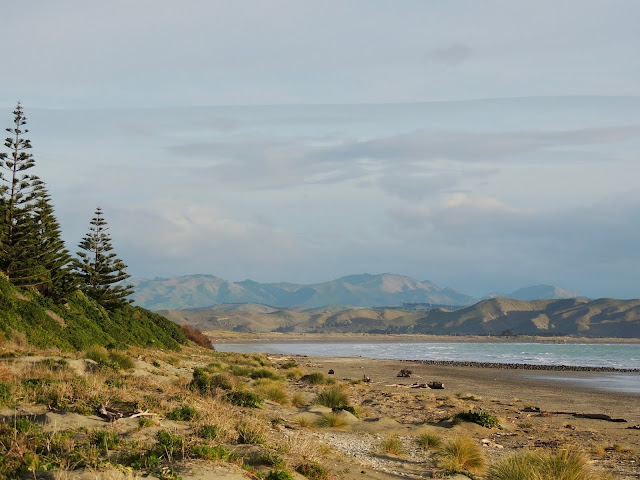 The light this morning was exquisite. 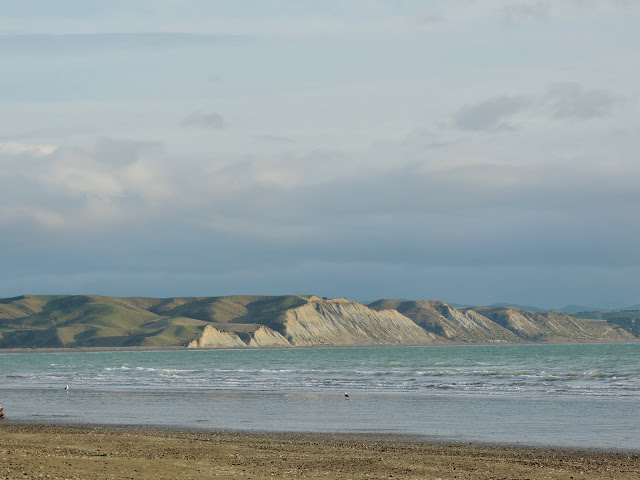 More of the campsites, nestled among the shrubs along the beach. 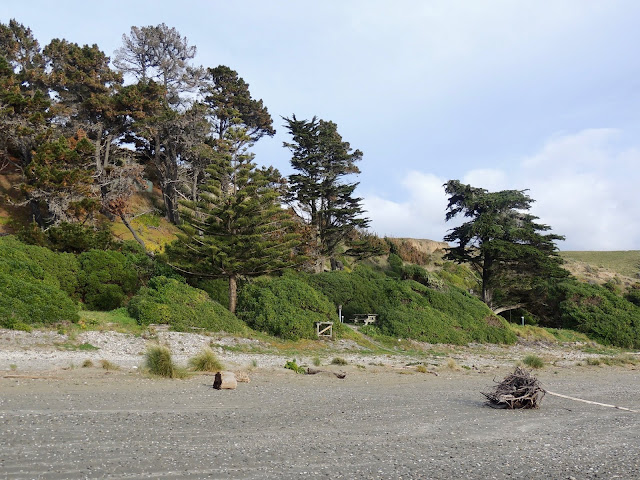 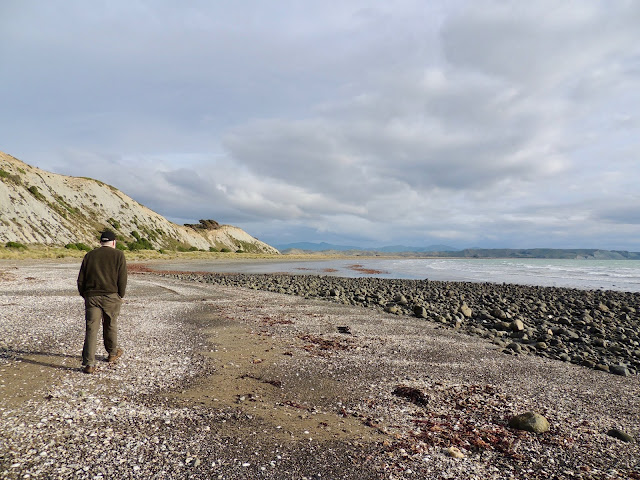 Food, always on the agenda
Art's grilling steaks for our first meal, despite a threatening sky. 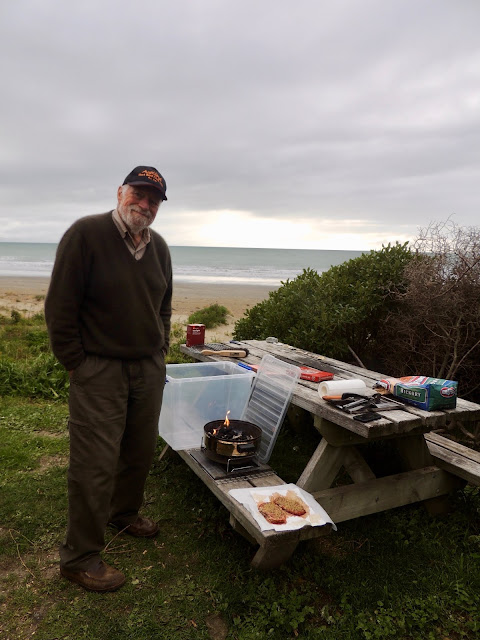 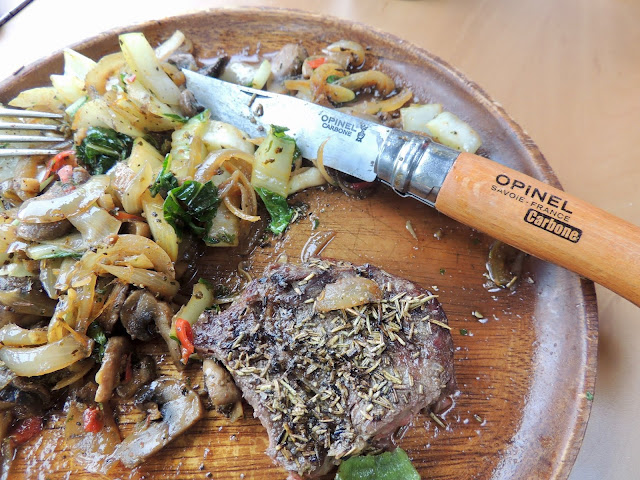 I've been researching North Island-located Alan Fong, The Fresh Grower, and from what I can tell he uses reasonable growing practices (though nothing specific is mentioned about pesticides on his website). 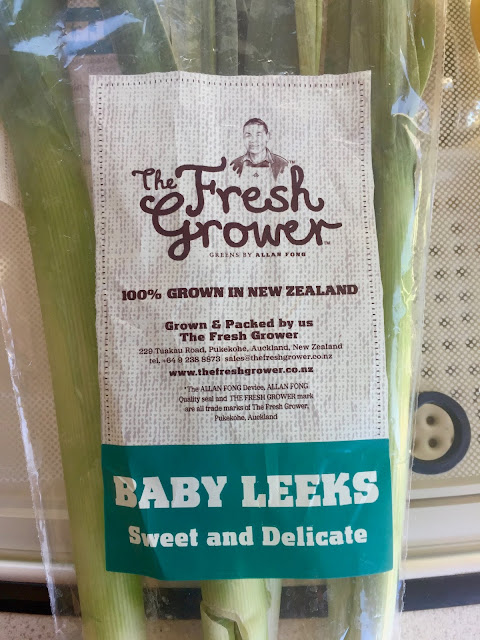 We have an extraordinarily serviceable kitchen area in the caravan. This was yesterday when we arrived, well-stocked after a huge shopping trip. I sauteed gurnard, possibly my favorite NZ fish.

(A side note: since we spent more than $200 at New World grocery, we were entitled to a free flat white at the coffee bar. A man awaiting his free coffee asked me "US or Canada?" and it turned out he'd lived in the Chicago suburbs for four years doing work in a body shop, returning to NZ when his wife got pregnant.) 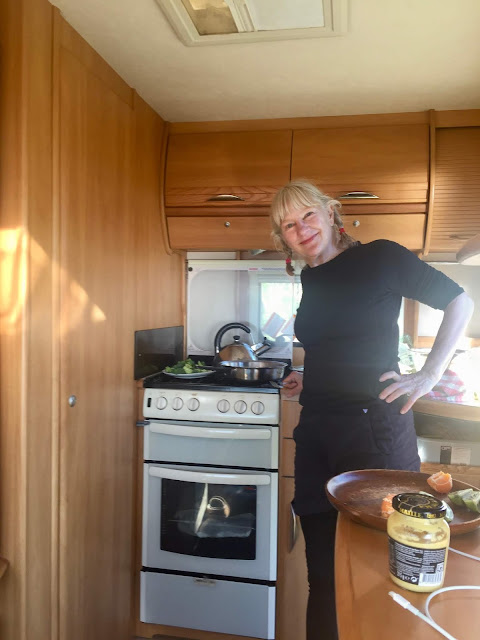 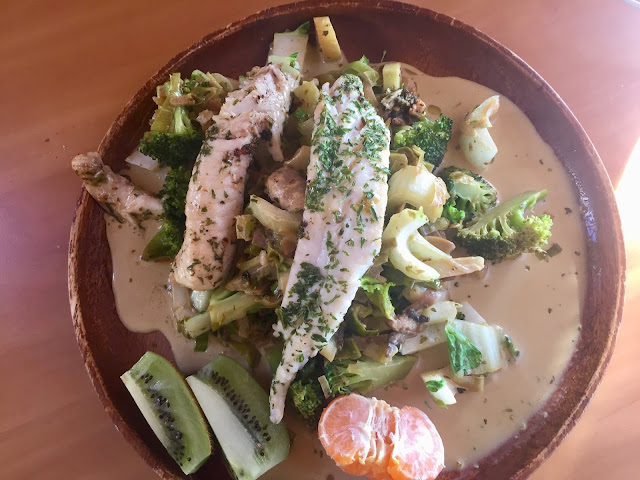 How happy we were to find these 180 Degrees crackers from our last visit. Made on the South Island, apparently they're not shipped to the North Island. At least I never found them. Whitestone Cheese, also located on the South Island, is everywhere in NZ. This particular wedge wrapped by Vicki... 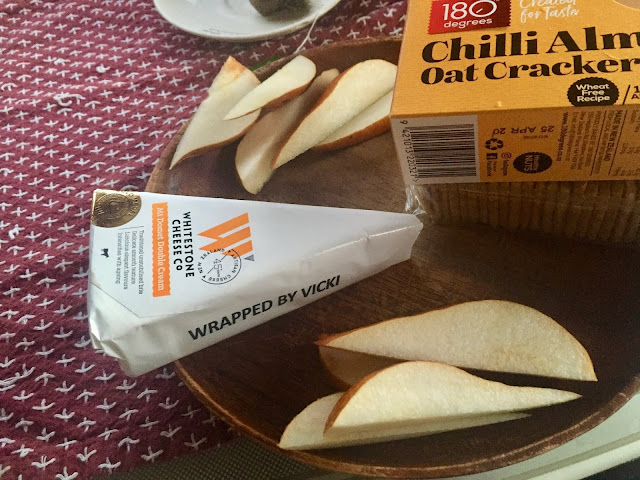