A Visit To The Possum Shop + Taranaki

Taranaki is linked by legend to the mountains of the central North Island. As the story goes, Taranaki once lived with the other volcanoes of the central plateau - Tongariro, Ruapehu and Ngauruhoe. When he made flirtatious advances towards a pretty hill named Pihanga, Tongariro erupted in a jealous fury. Taranaki fled to the west, gouging out the Whanganui River on his way. Today Taranaki is still venerated and its summit is sacred to the Maori people of the area. (photo from website) 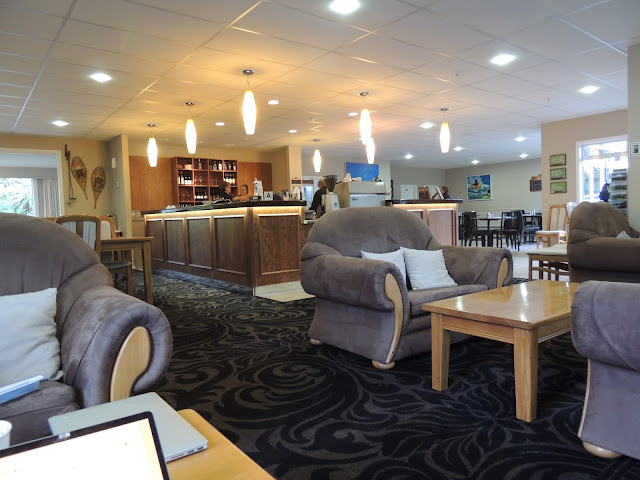 Hello from the cozy communal space at Stratford Mountain House (positioned right on Mt Taranaki), where there's a dining room and bar and some astonishingly friendly hosts. With a US dollar buying us a robust NZ $1.42, we're staying in a studio room for a little less than a US Holiday Inn Express. 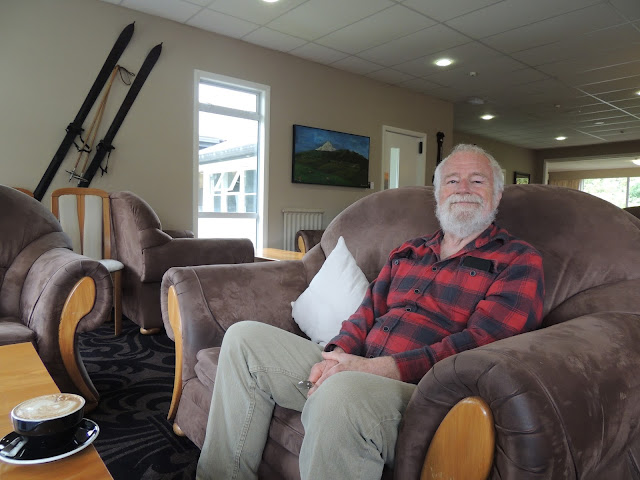 Good start to the day in New Plymouth 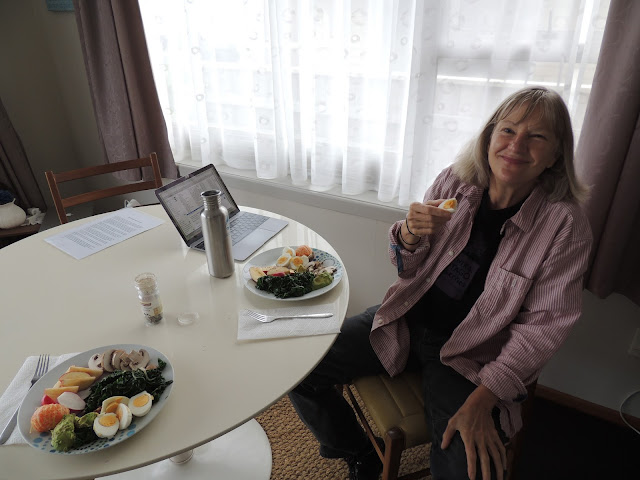 We hit the road and 40 minutes later arrived at a small workshop where possum-Merino sweaters, shirts, gloves, hats, slippers, and socks are made. Here's me on our hike today, in my possum sweater, which, if you know me, you know I've been wearing virtually every day for two years. I need another one. 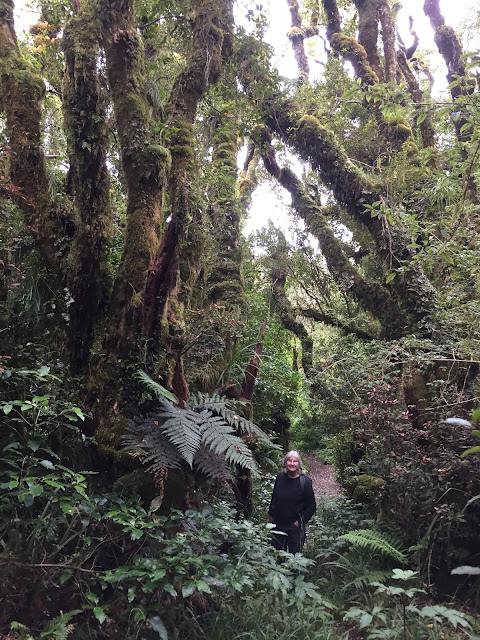 When blended with Merino wool, possum fur creates a garment that's incredibly soft and warm. Because the possum fiber is hollow, it's lightweight and highly insulating while allowing perspiration to exit. Possum fur is called eco fur here because the Brushtail Possum is NZ's number one pest, decimating vast tracts of native forest and endangering native species. Even the World Wildlife Fund NZ sanctions commercial possum harvesting as one way to keep possum numbers down. The other way is a nasty chemical called 1080. 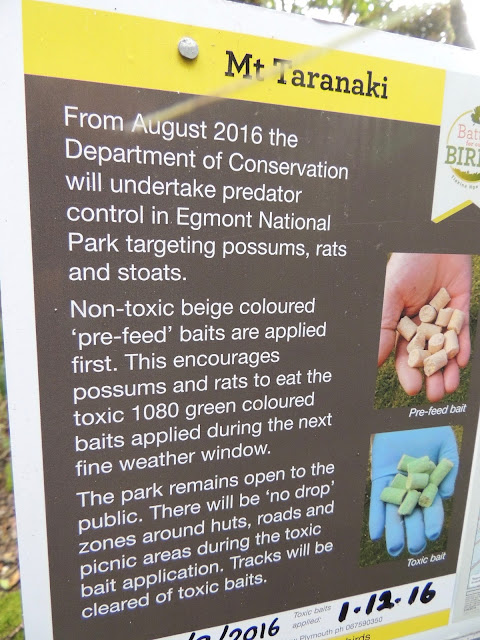 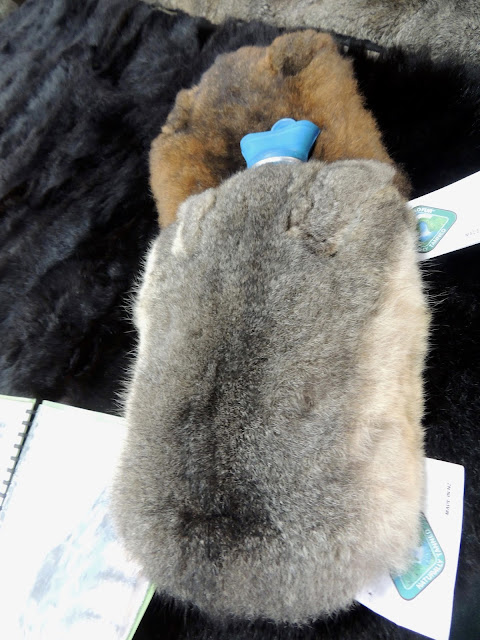 Via wiki: European settlers aiming to establish a wild source for food and fibre and fur pelts for clothing introduced the common brushtail possum from Australia to New Zealand in the 1850s; by the 1980s the peak population had reached an estimated 60-70 million.[1] Through control measures, by 2009 the New Zealand population had been reduced to an estimated 30 million.[2]

The uber-helpful Jillian will assist you in selecting a possum-Merino product to keep those numbers down. 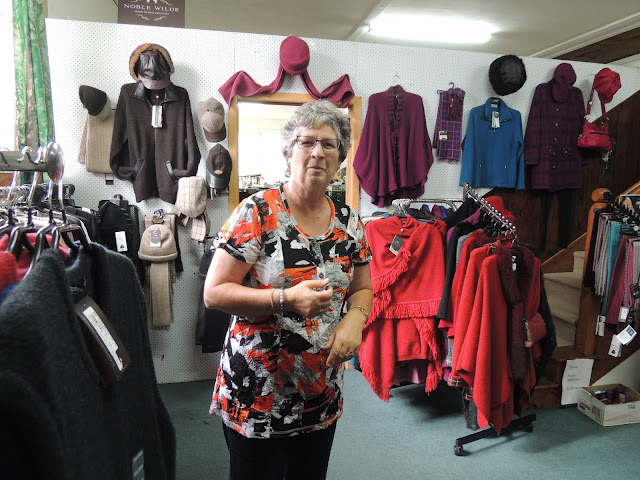 Side note...
A number of New Zealand companies are exporting possum carcasses to Taiwan, Hong Kong and Malaysia for human consumption, where possum is regarded as a delicacy and known as "Kiwi bear".[18] There is also a small industry processing possum meat as 'Possyum' dog food,[19] also for export. 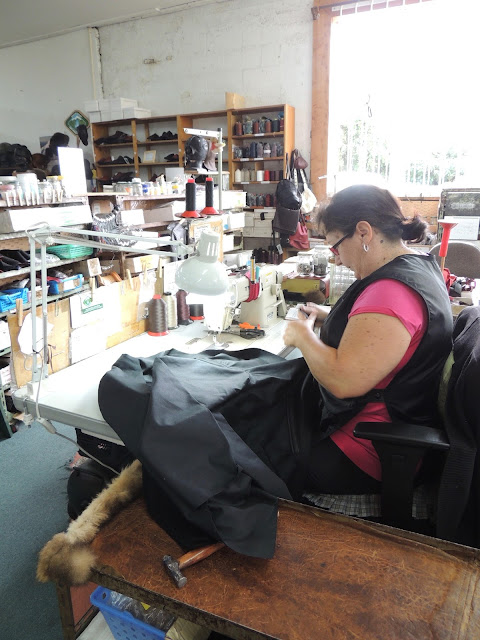 There are hats and boots lined with possum too. This is a workshop and also a place to browse and buy. 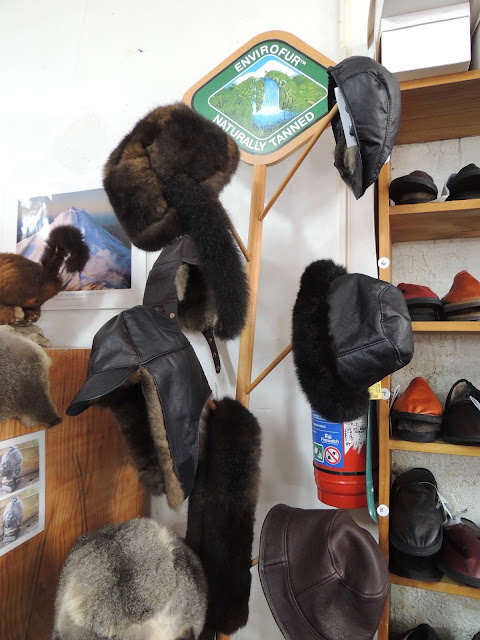 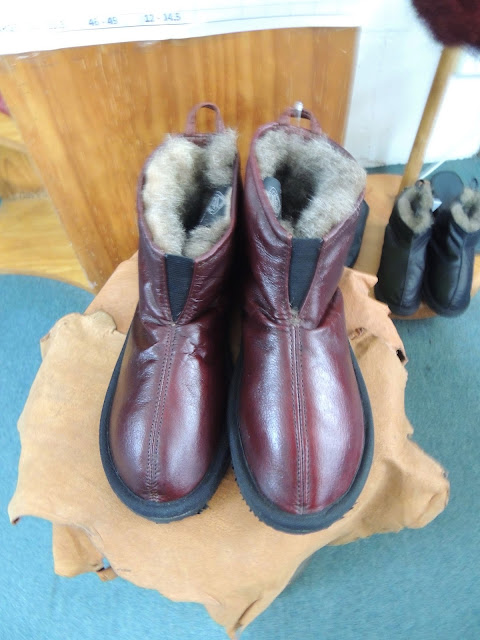 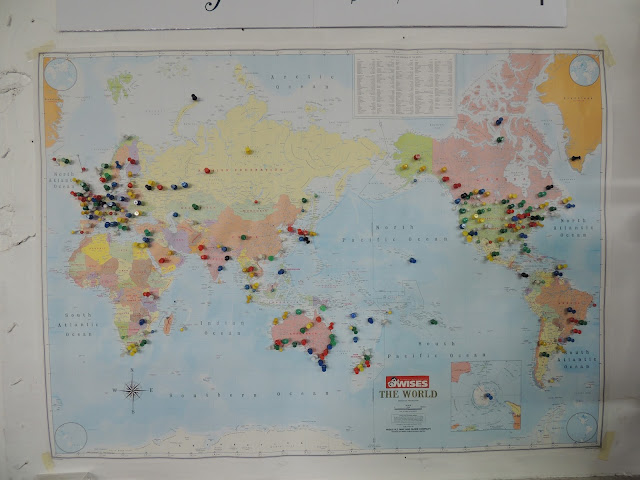 We had a vigorous 90-minute hike today, lots of up and down, varying terrain with occasional steps 20 inches high, amidst the lush terrain of the lower Taranaki, which sits in Egmont National Park. No summit for us, I'm thinking. And speaking of summits, Art wonders if the volcano actually exists, shrouded in thick clouds as it is, or if perhaps it's a tourist trap. I can feel it looming and we caught a glimpse today, crossing fingers for clear skies tomorrow, when a longer hike awaits us. 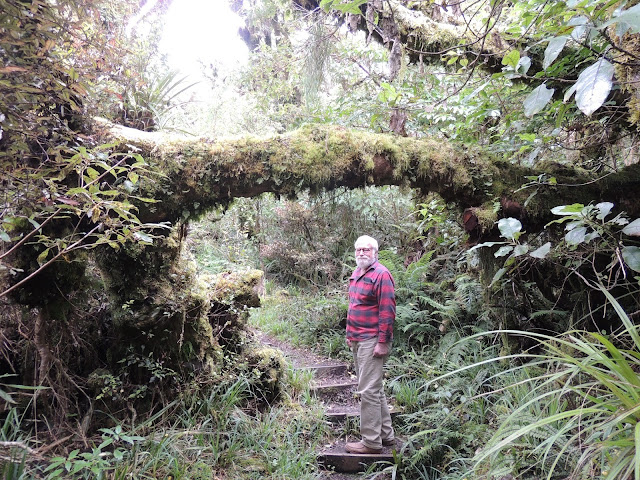 This is part of the trail. Honey, you up there? The elegant owner of this lodge asked us tonight how our hike was. When we told him where we'd gone he said "I understand the people who maintain that track aren't doing such a good job." 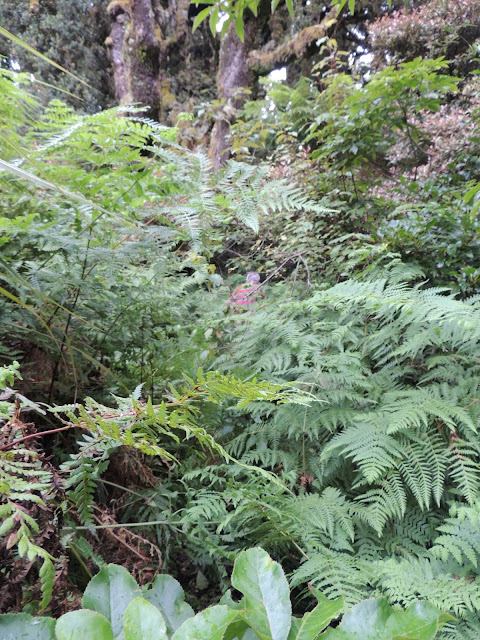 Sign on the trail. Who knew? There could be a goat in that foliage above, but how would I know? 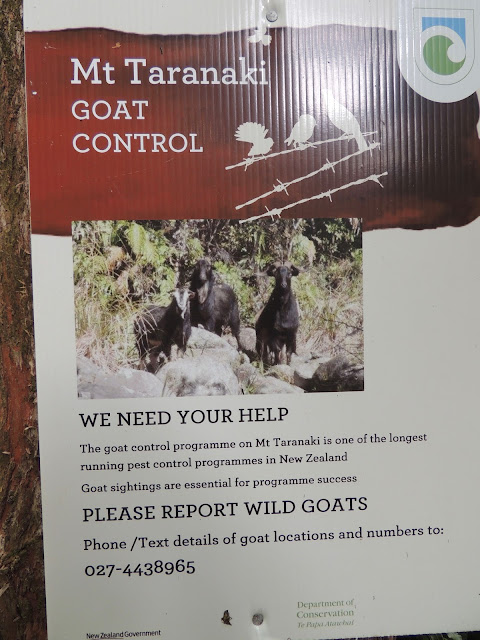 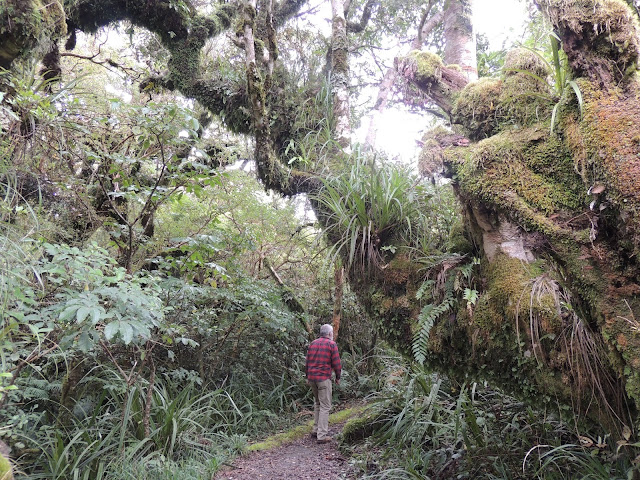 Layer upon layer of growth masks the tree's exterior. 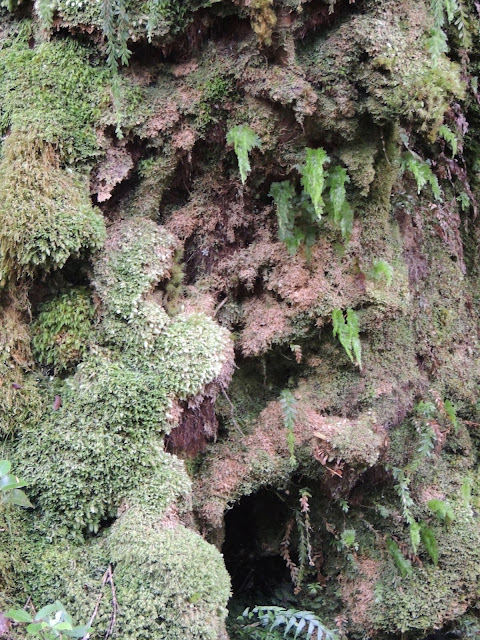 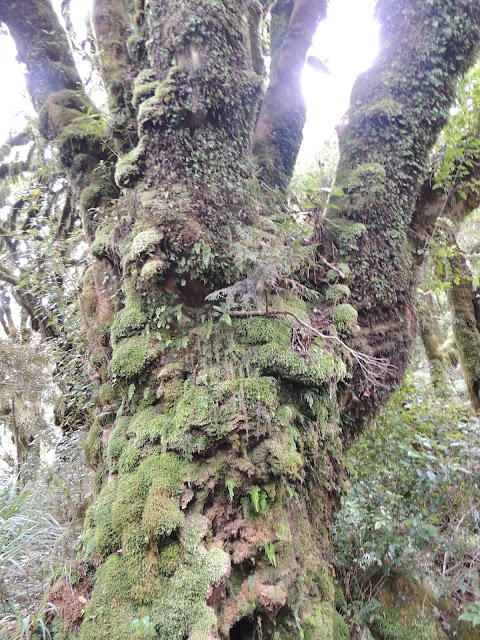 Art brushed past something whose seeds wanted to travel. These babies had nasty barbs that hurt when we pulled them out. He bled a little too. Should I buy him a cocktail? 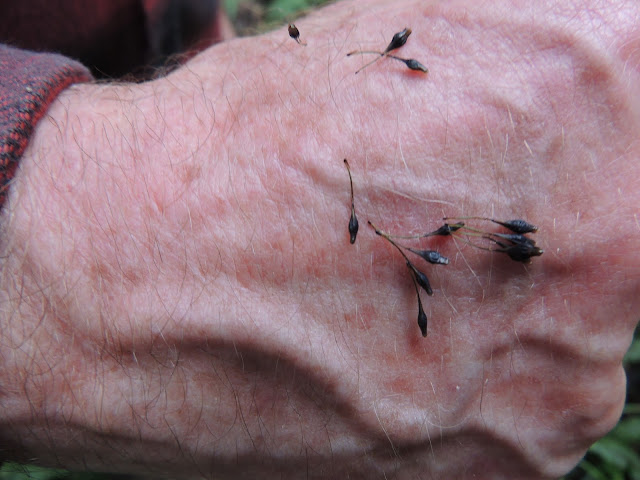 The sun popped out late on the trail. 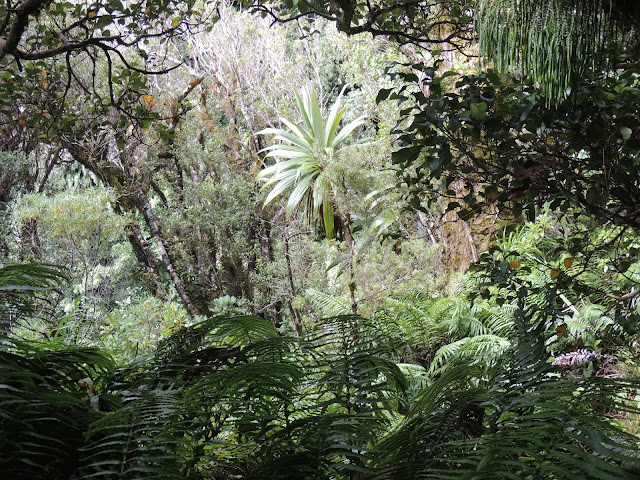 This is where we're undoubtedly returning tonight. Stay limber, campers... 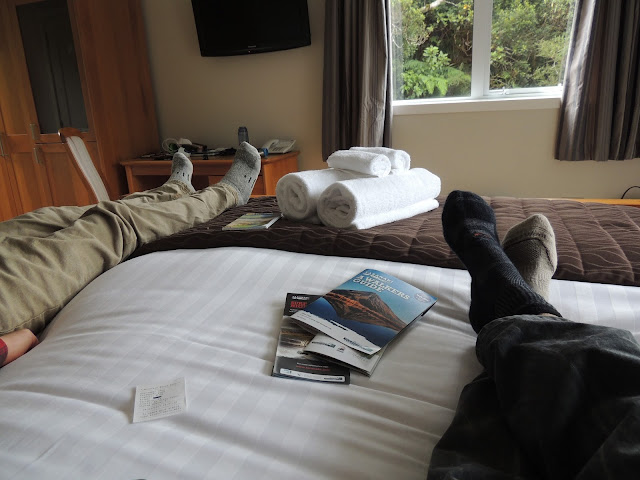