Bottom of the North to Top of the South

The three-hour Interislander ferry journey links NZ's North and South Islands. The 92 km (57 miles) sail between Wellington and Picton has been described as one of the most beautiful ferry rides in the world. Here's one of the ferries arriving at Wellington, where we park the car and head for the terminal. 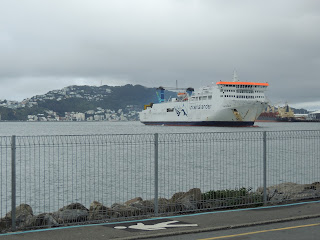 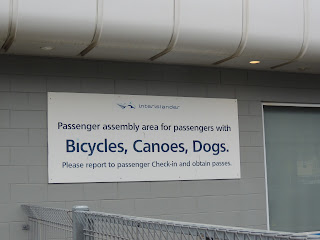 In the terminal Thursday waiting to board, Wellington's newspaper led with the fog that had grounded thousands of air passengers and caused many car crashes on Wednesday. Happily, it had cleared for our drive into Wellington. 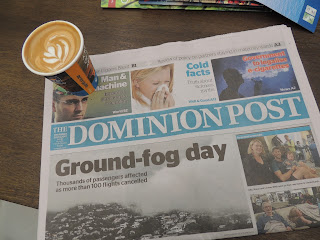 This is good news. It won't go into effect until next year, but stands to help many smokers quit. 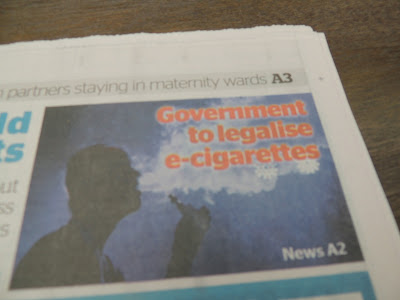 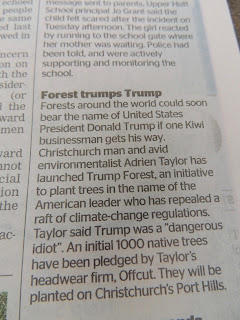 It's a thrill every time to see the maw open and toy cars stream out. 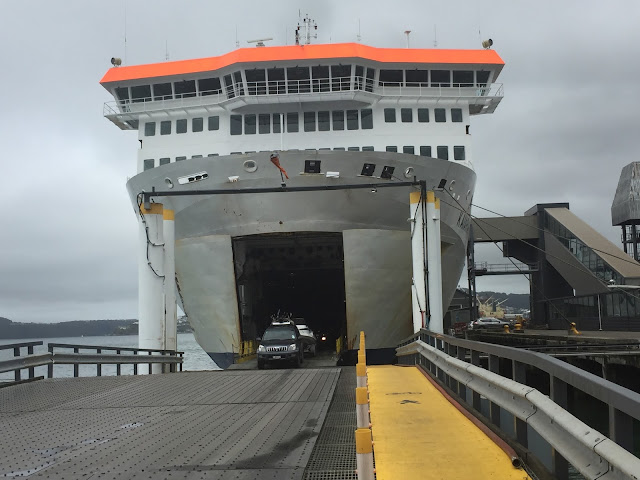 Now it's our turn. There's some serious traffic directing inside. 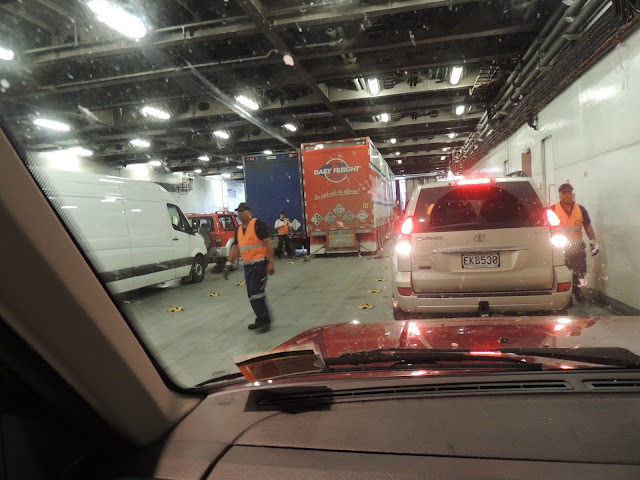 The vistas along the way are enough to trigger good dreams. 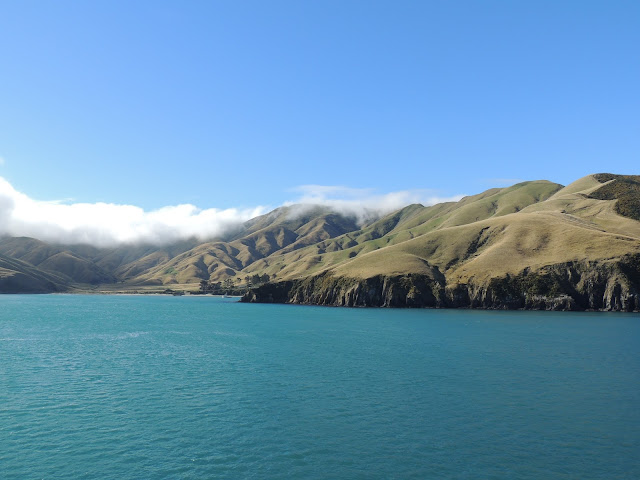 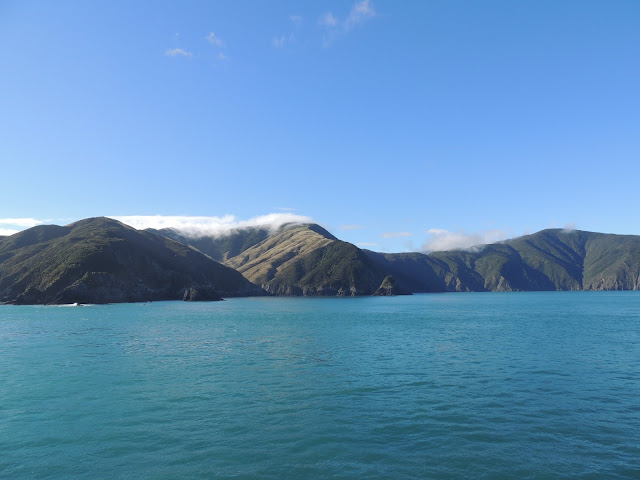 Last night we landed just before 6 pm and made our way to the modest motel we'd booked. Then ensued a classic story of two people whose blood sugar was dangerously low, walking (yes, I'd misjudged) to the only resto nearby (and by "nearby" I don't mean nearby), ironically called the Jolly Roger because the owner was not in any way jolly (he was a big meanie) and our simple meal of two bowls of fish chowder turned out to be the worst we'd ever had AND it took a full one hour and 15 minutes to be delivered to our table, by which time we were trying to reassure each other that we were lucky to be in NZ. Then we had to trek back. I thought this was a nice picture though, on the hopeful walk toward dinner. 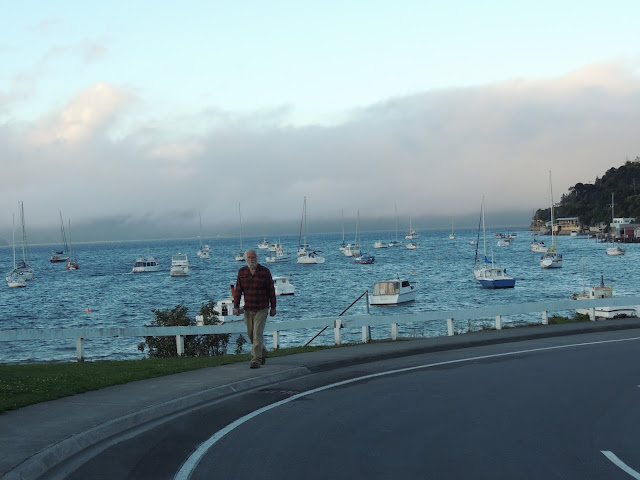 The Jolly Roger is attached to the biggest marina on the South Island. How could all those yachties put up with it? 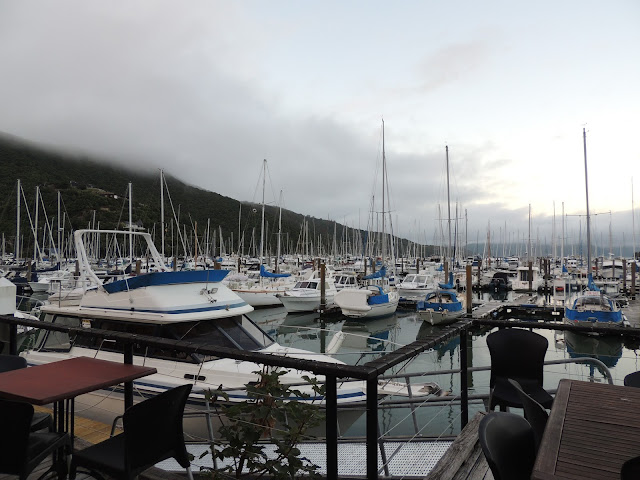 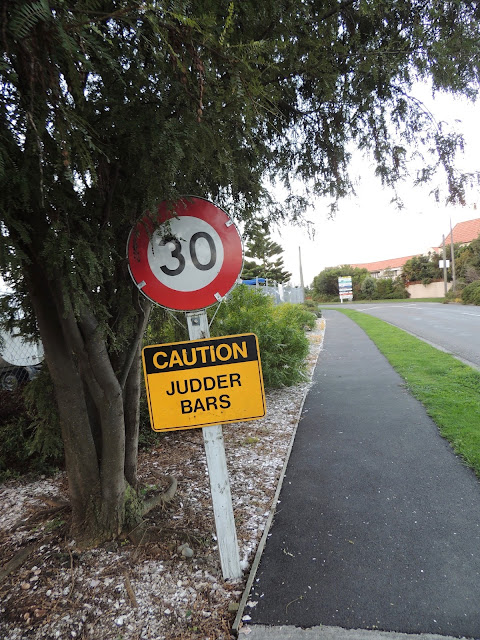 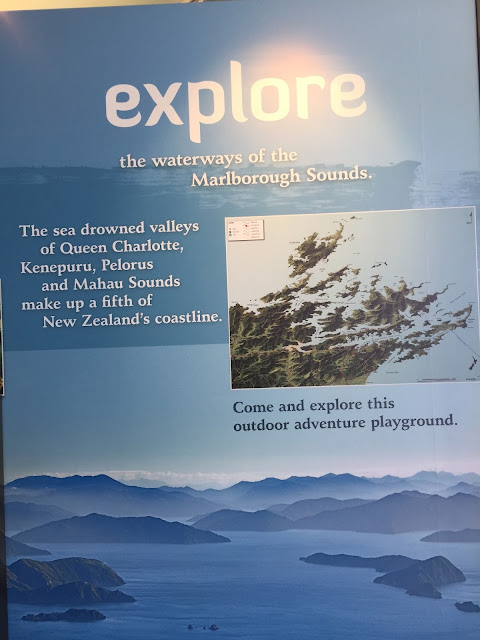 We went to the iSITE in Blenheim, one of many scattered throughout NZ whose job is to help you with info on walks, activities, maps, and anything else you care to ask ("Where could we find a nice cafe?"). 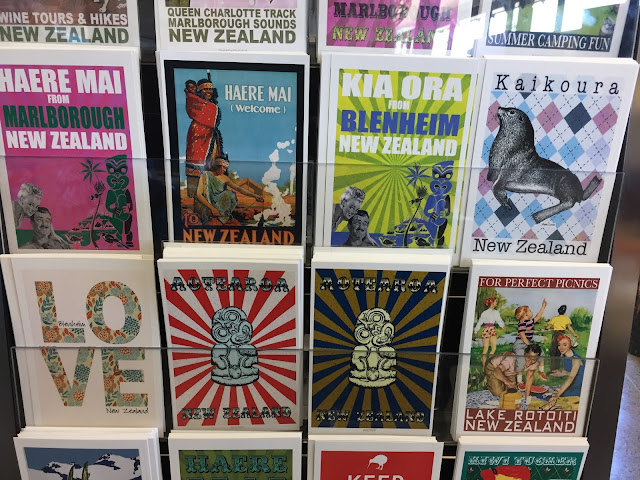 The 7.8 earthquake in November 2016 ripped up route 1 to Kaikoura (which we visited in 2015), where locals make their living with whale watching tours and other such pursuits on their gorgeous coast. We hope to visit again in support of their economy. 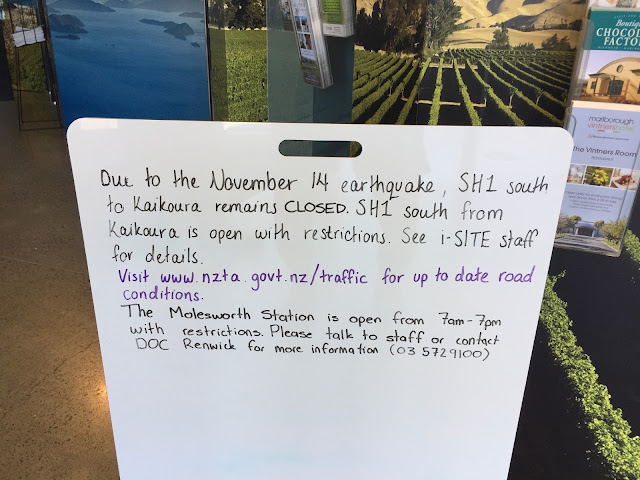 81 degrees F and sunny today in Picton, cooling at night to 53F, just about perfect. Off-season rates begin on April 1 and on Saturday/Sunday we fall back an hour. Autumn arrives in NZ. 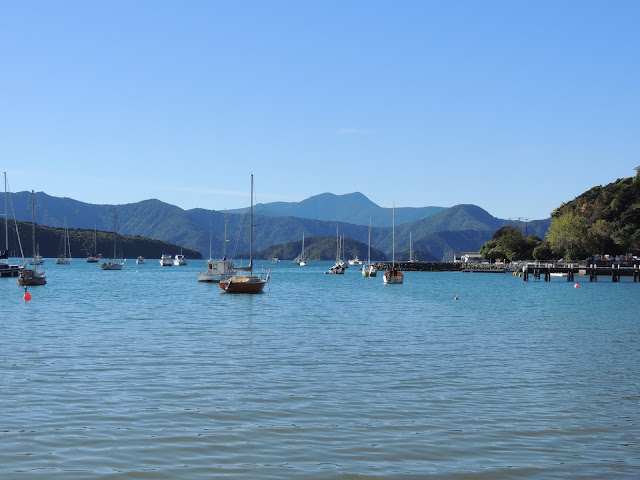 We walked the harbor across from the motel this afternoon in the still-warm sun. 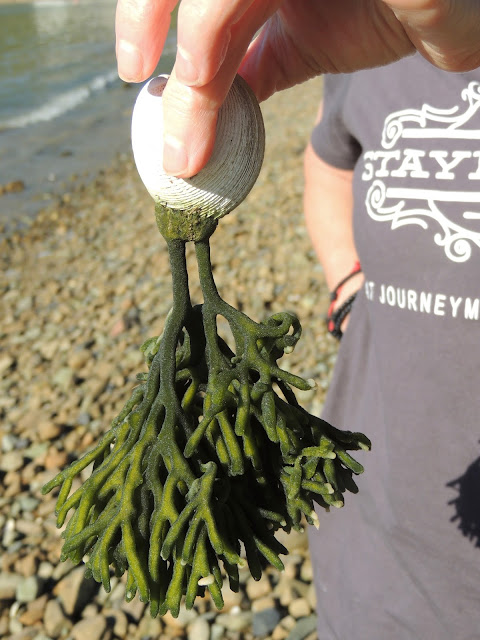 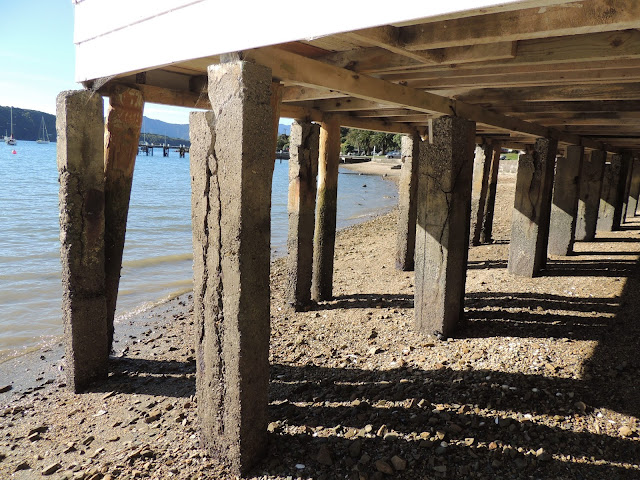 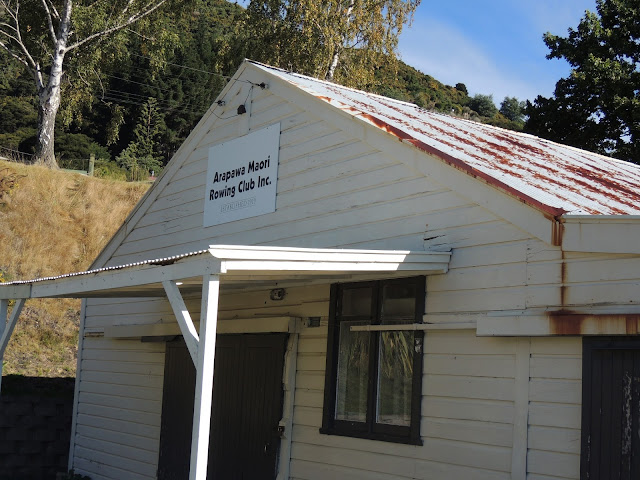 Gurnard and greens for dinner, the gurnard fresh from the boat at the New World grocery in Blenheim, where we shopped today. 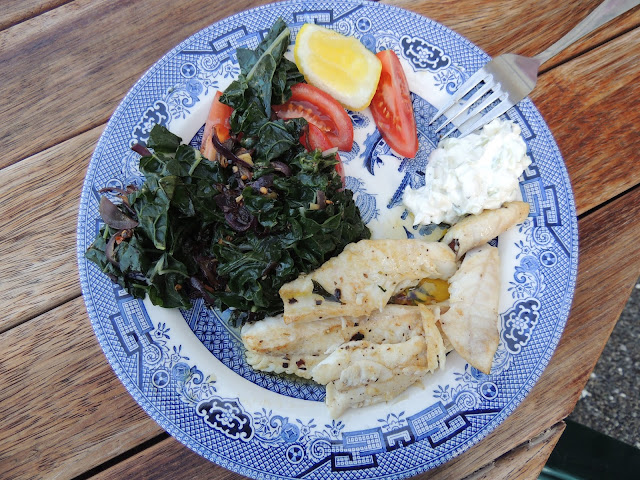 South Island salut from the Queen of Flat Whites, who likes this island best 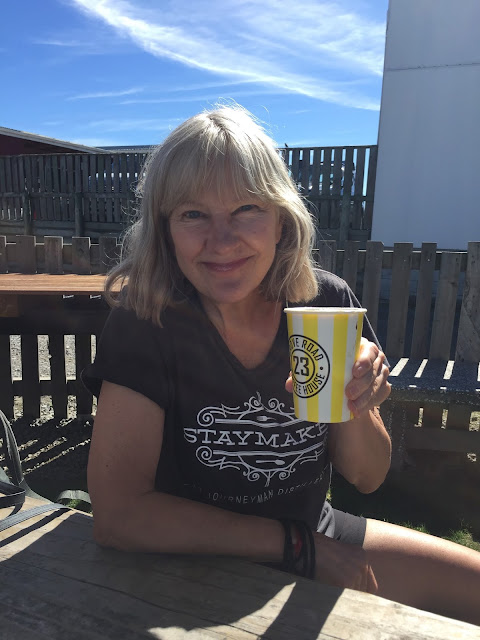 Tomorrow we're heading for a few days at an airbnb in Anakiwa in the Marlborough Sounds. It sits near the end of the Queen Charlotte Track, one of nine NZ Great Walks, and we're hoping to hike a nice piece of it.