In Oregon, you don’t pump your own gas. A station attendant has to do it for you. Before leaving Pendleton we pull into a 76 station. Brenda, bright and cheerful,  told us her story… 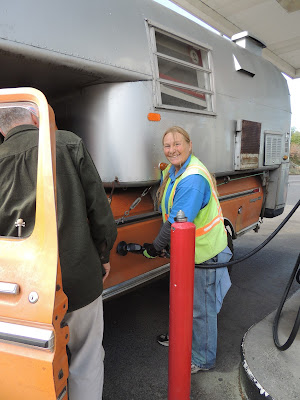 She grew up on lake Erie and then moved to Bisbee AZ, where she went to school with John Wayne Jr for a year. Her friends urged her to go to Washington to get rich picking apples, so she did, but instead, she says, she got rich another way: by meeting her husband of 32 years.

She took him back to Bisbee and one day he found a cowboy hat in the Bisbee dump. Soon after, he was driving his truck wearing his new/old hat and some film people in town noticed him. He came home and announced “Guess what—you’ll never believe. I got a job in the movies, honey.” 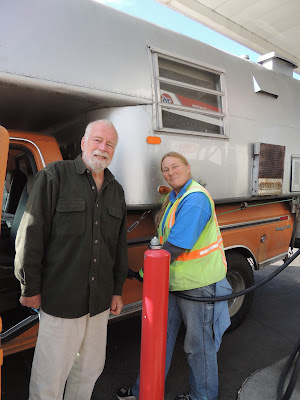 They wanted Brenda and their child in the film too, so there she is, in a 1988 movie of the week called “Jesse,” starring Lee Remick. People’s stories enchant me endlessly. Or as Jimmy Buffett says:
I wish that I could sit upon the bed in some motel
and listen to the stories it could tell
Posted by H2 at 5:29 PM

Email ThisBlogThis!Share to TwitterShare to FacebookShare to Pinterest
Labels: Amtrak 2013, Pendleton OR