People of the Train

Every Amtrak trip includes sitting across from new people in the dining car. Here are Pat and Ken from Sydney, Australia, who are on a six-week tour around the US and Canada. They'd already visited Niagara Falls and were getting off the train in Lamy, NM, for a tour of the Grand Canyon. We laughed a lot. 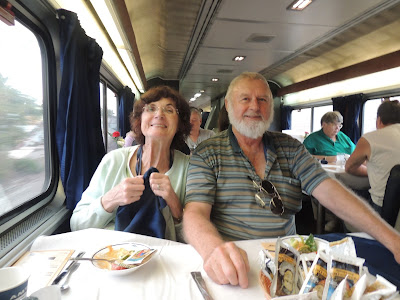 Tuesday night's table featured a marginal turkey shank but lots more laughter with Susan from St Louis, going to CA to hold her new grandchild for the first time, and the vigorously healthy 82-year-old John from Sedona, returning from St Louis where his granddaughter had been married.

The circle of life.

None of us knew each other well when we started but by meal's end they were close to throwing us out of the dining car for boisterous behavior. One look and you can see why. 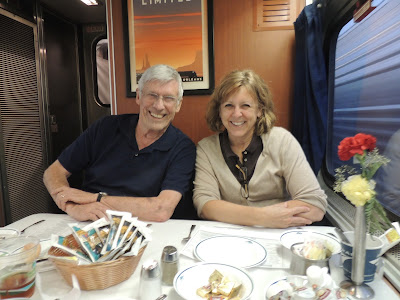 When their shifts end, engineers and conductors swap out with fresh ones. 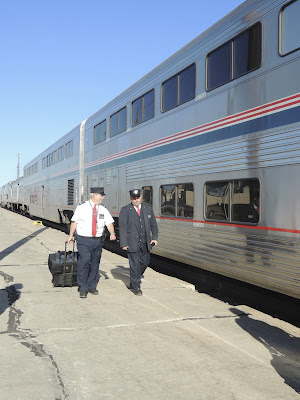 Grilled Angus beef burger for lunch one day in the dining car. 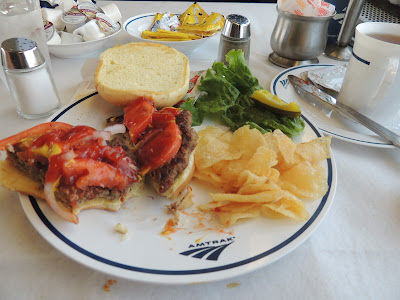 Art is making too many pix of me, here trying to work the blasted ipad hotspot in a literal hotspot in Albuquerque. Behind my smile I assure you I'm hiding a bad attitude about technology. 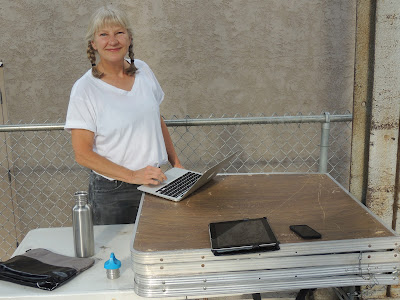 I enjoy this half-hour stop because the first nations vendors are out selling their wares. 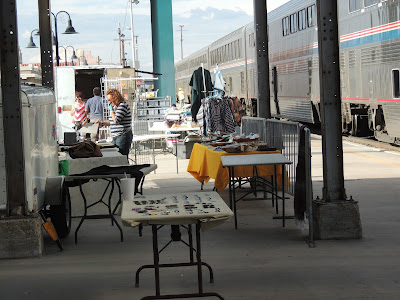 On Tuesday we were awakened at 4:30 am Pacific Time by our car attendant to make it to 5 am breakfast before disembarking in Fullerton not long afterward. Chris and Ralph from Cleveland joined us, looking fresh as daisies. They're on their way to Hawaii via LAX tomorrow, a trip they've dreamed about for quite a while. 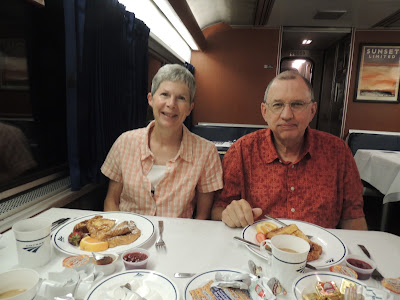 It's already been a long day and we're currently at a Mercedes automotive place in Anaheim, where some unexpected work is being done on the Ford truck in heat that can only be described as clay-oven. The friendly receptionist came to work with a goose named Turkey who is nestled on a poop pad under her desk. I'm sharing their blessedly air conditioned space, writing to you as a bag of crickets chirps merrily nearby, unaware of their fate as Turkey's 3 pm snack.