Four-day holiday weekend here and we used the grocery as a guide: closed Friday, open Saturday, closed Sunday, open Monday. Most retail would follow that theme. So on Saturday we set out for a walk on a fine sunny day to get better acquainted with Nelson.

First stop, this antiques shop. Walked in, said hello, and apparently with a keen ear reading my accent the proprietor looked up and said: He's a mischief-maker, your Mr Trump. Then ensued a non-stop 30-minute flow of snarky oratory on how the queen's gilded carriage should make him happy. (I never got to browse, but Art did.) 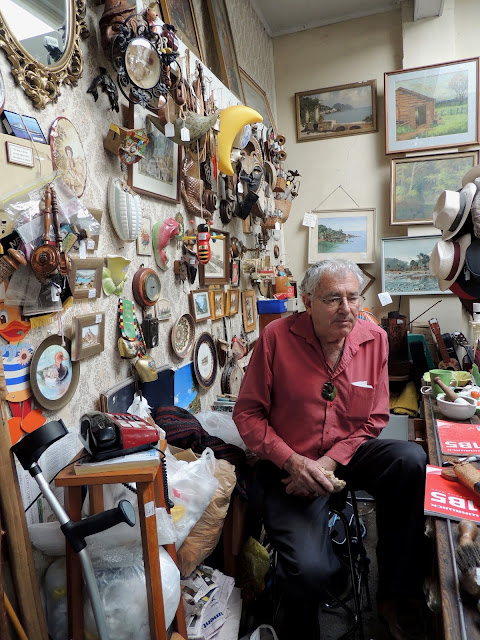 Walking toward Queen's Gardens and the Suter Art Gallery, we stumble on historic South Street, a time when tiny houses weren't trendy, just tiny. They seem to be occupied, and we need to return and explore further. I did a little research on South Street. You can read about it here. 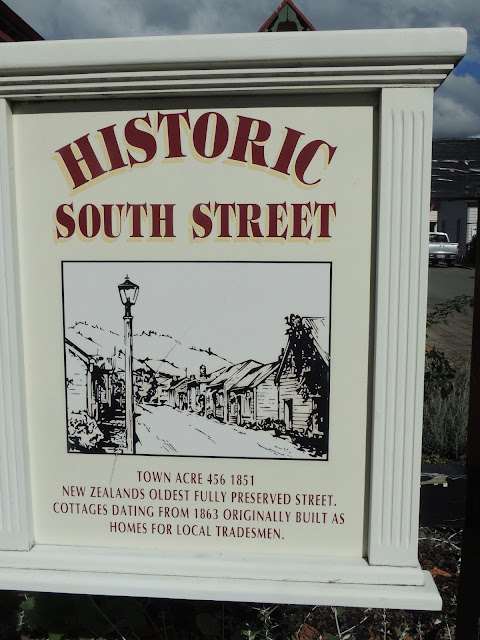 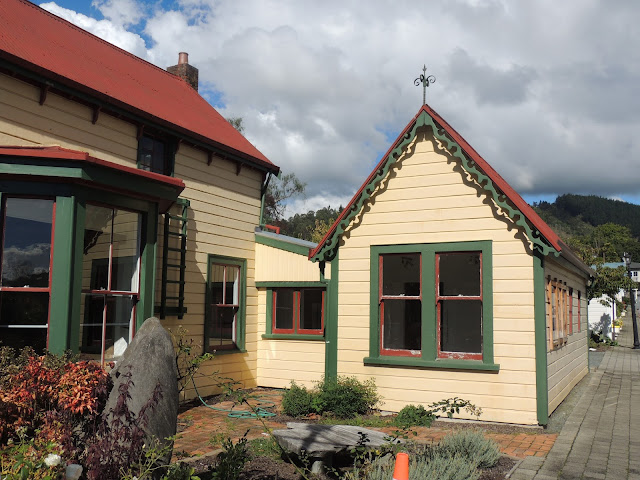 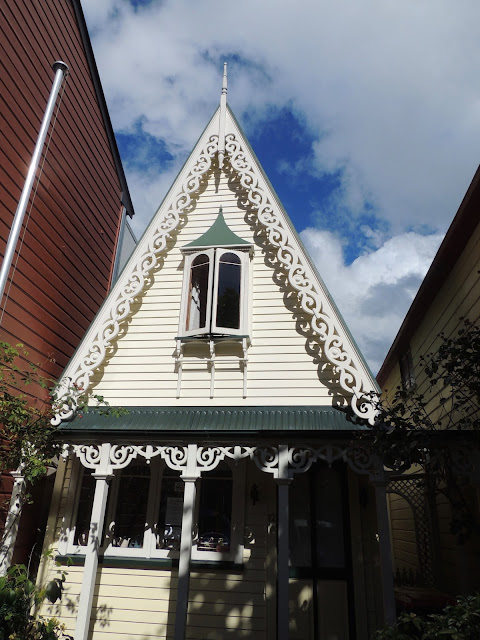 There's Christ Church Cathedral, an Anglican church, rising against the NZ-blue sky. This Sunday Easter morning, we heard its bells. 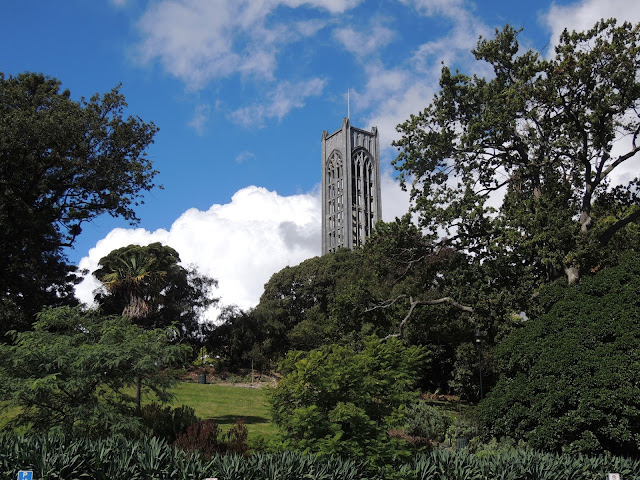 Queen's Gardens formally opened in 1892 to celebrate the Jubilee of Queen Victoria. It was designed around the residual part of the Maitai River called the Eel Pond – a food gathering place for the Maori. 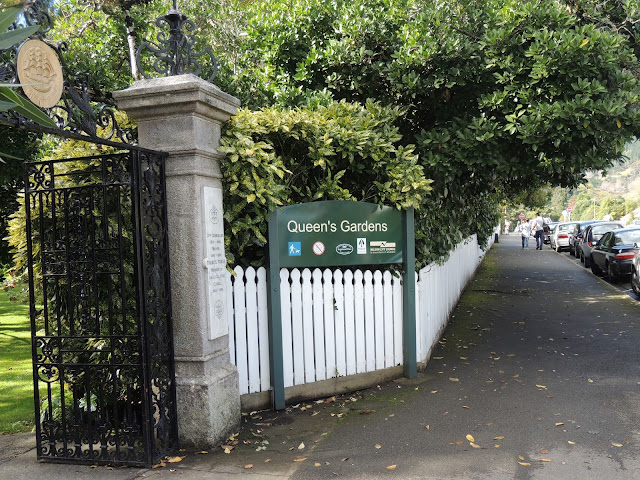 A classical Victorian ornamental park. At right, a dawn redwood. Read the interesting note below. 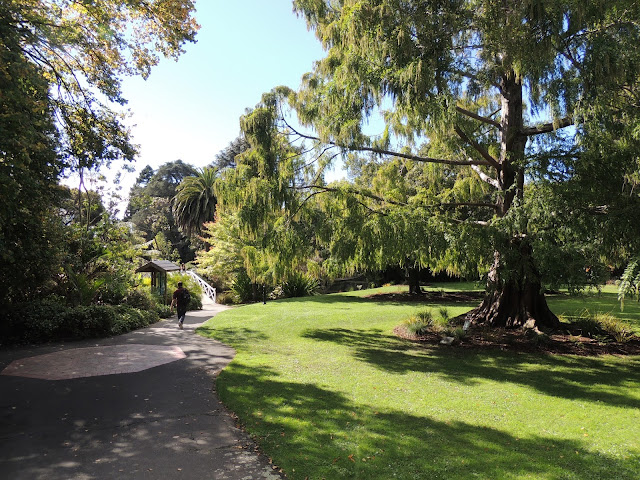 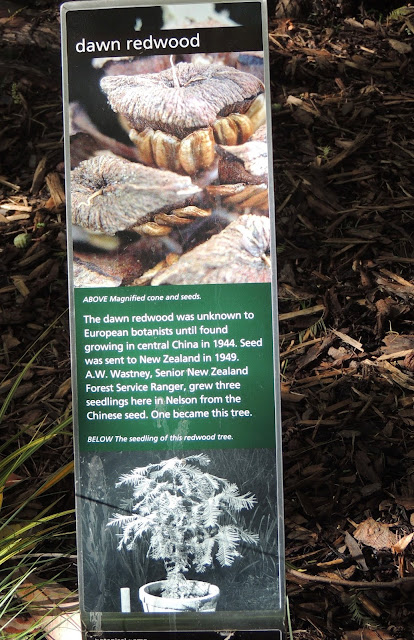 (On the return this gorgeous tree was presiding over a wedding.) 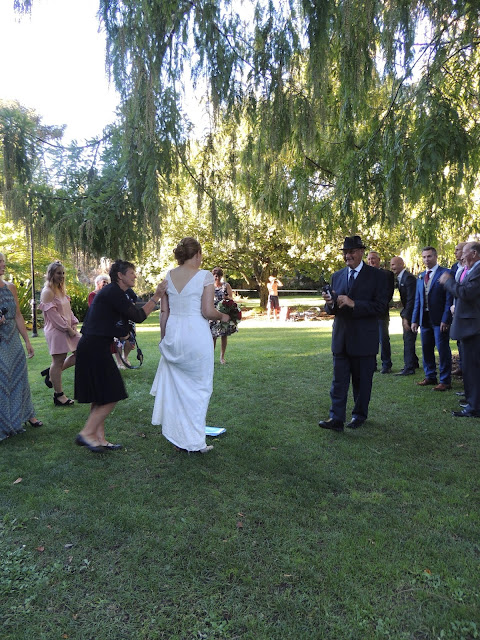 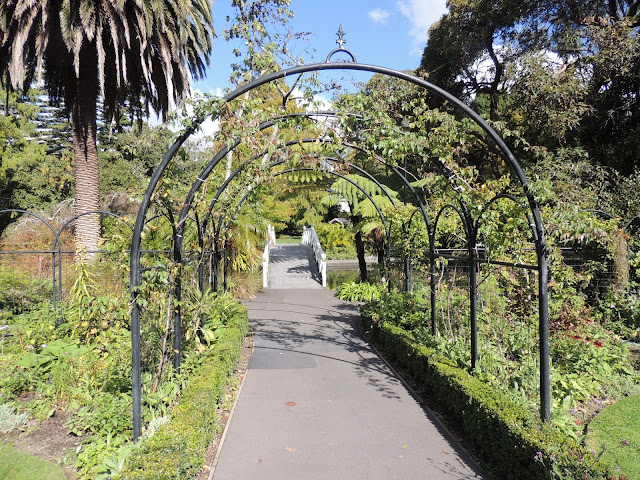 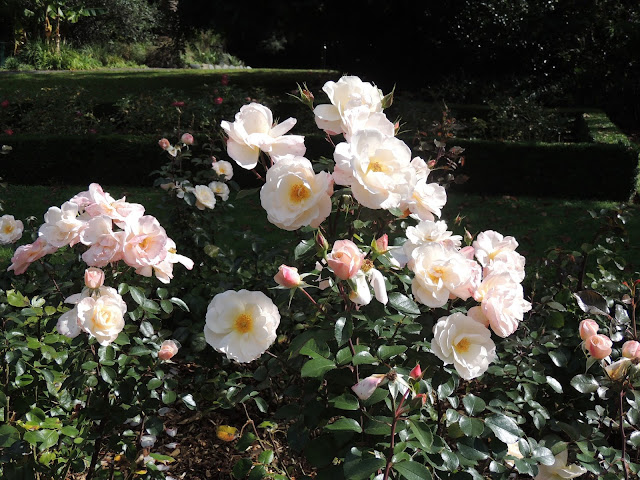 The Suter is a mash-up of old and new, not well captured in this photo, but described here (click through for a look at the original structure, which at least partly still stands, shoulder to shoulder with the new):

In 1899 the ‘Bishop Suter Art Gallery’ designed by Frederick de Jersey Clere (1856-1952) was opened alongside the old Matthew Campbell School. In 2007 it was designated as a Category II Heritage Building. In 2016 work was completed on a major redevelopment of The Suter. Significantly expanding the galleries spaces the project also included strengthening and protecting the original heritage building. 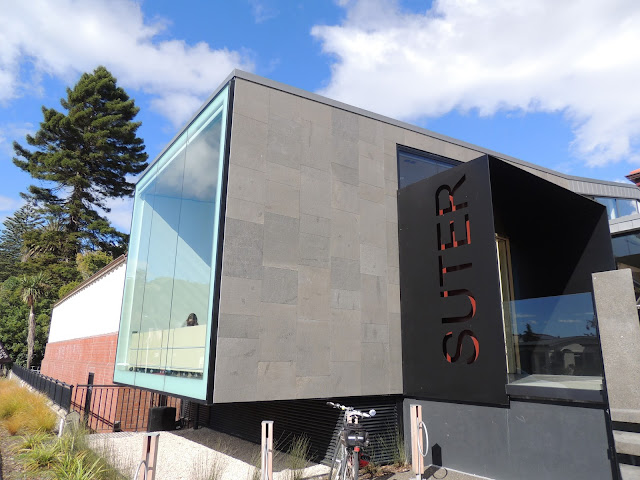 The current exhibit, Milk and Honey, is described thusly:
Depicting Nineteenth Century emigration to Nelson, landforms unique to the top of the South Island, regional industries, and our bicultural history, Milk and Honey spans over two hundred years of New Zealand artworks and offers a glimpse of the creative endeavours this distinctive area has inspired.

It was thrilling to view pieces inspired by some of our favorite places here at the top of the South Island, including Golden Bay. 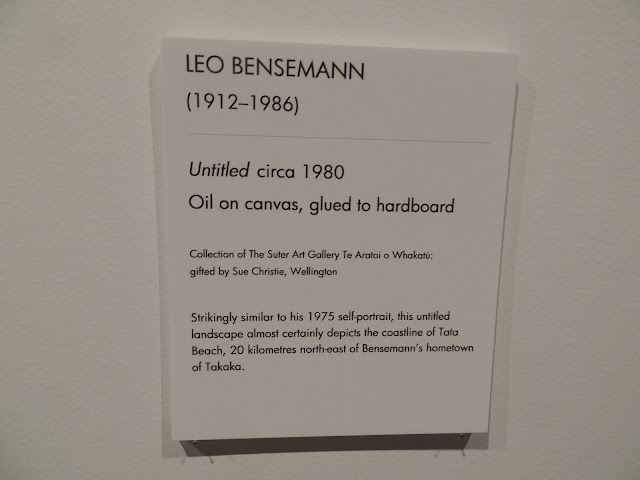 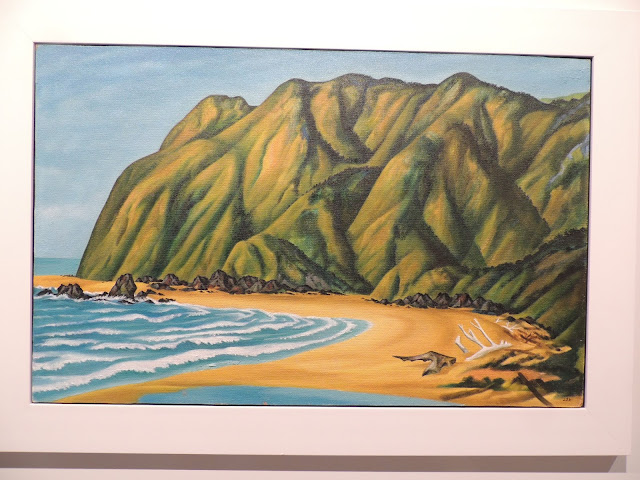 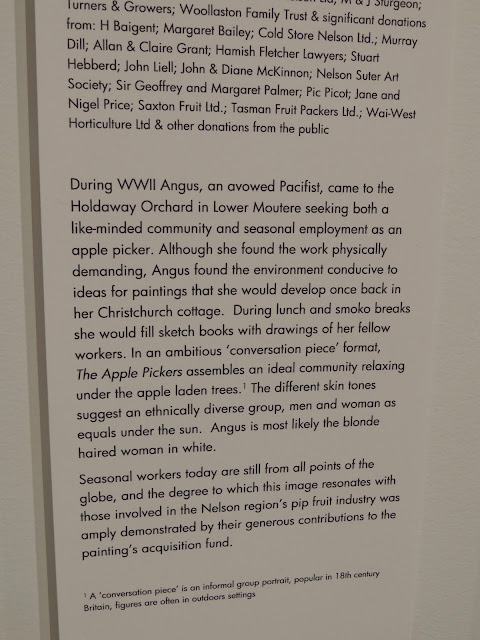 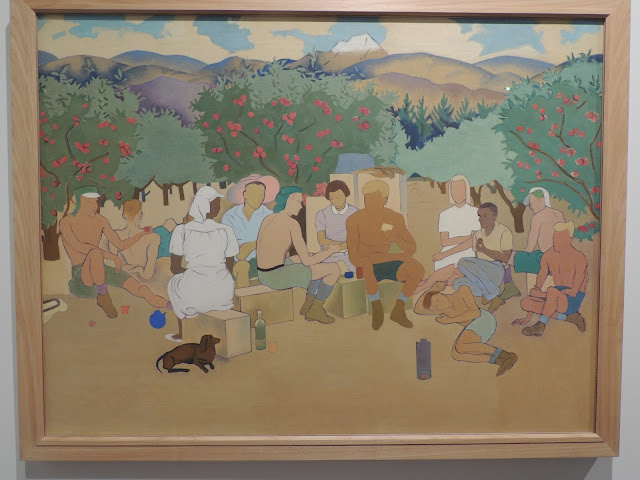 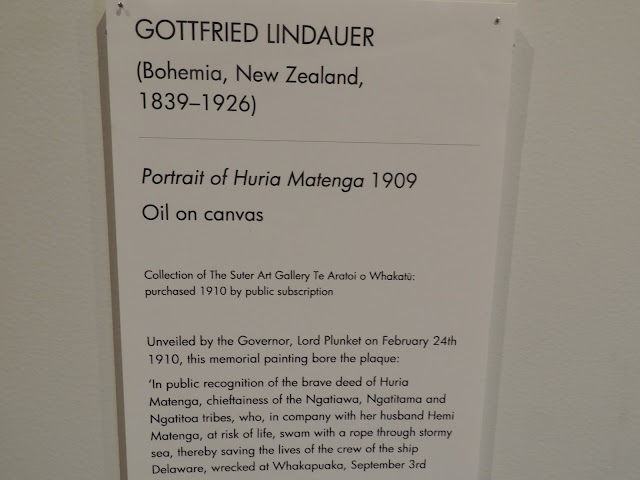 Huria Matenga gained national prominence in 1863 for the part she played in a sea rescue. On the night of 3–4 September the brig Delaware, on its way from Nelson to Napier, ran into a storm and was thrown onto the rocks at the foot of the cliffs at Whakapuaka. Huria Matenga, her husband and three other men saw the difficulties of the crew and came to help. Accounts of Huria Matenga's part in the rescue conflict, but it seems probable that she was one of those who swam into the surf to pick up a lead line thrown by the captain. A hawser was fastened to a boulder on shore, but by this time the storm had become so fierce, and the ship was rolling so badly, that the line continually slumped into the water. Huria Matenga and two of her companions swam out into the surf and helped the crew ashore. All but one were saved. 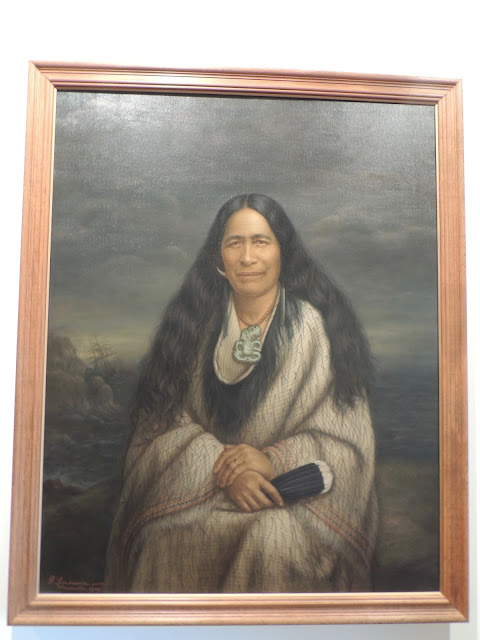 Much reading and gazing later, time for refreshment. The cafe at the Suter has just been buffed. 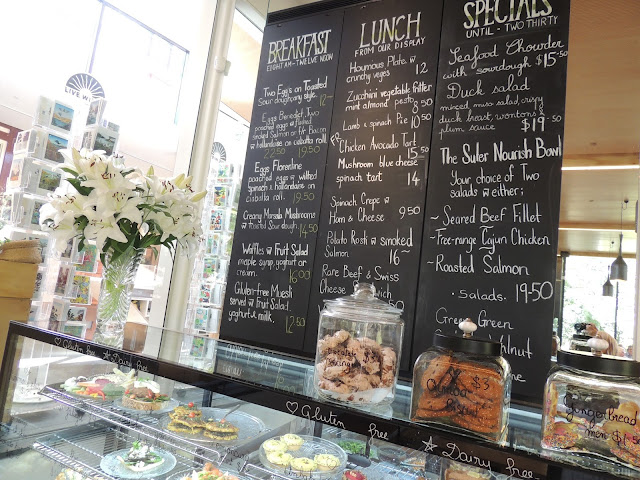 We sit with a view to the Queen's Gardens for a flat white. 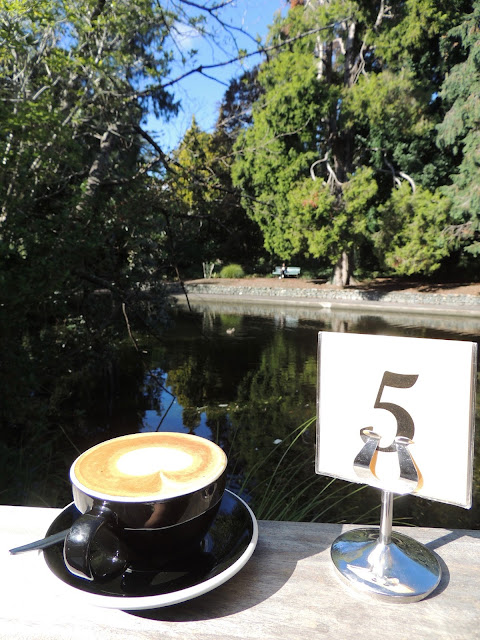 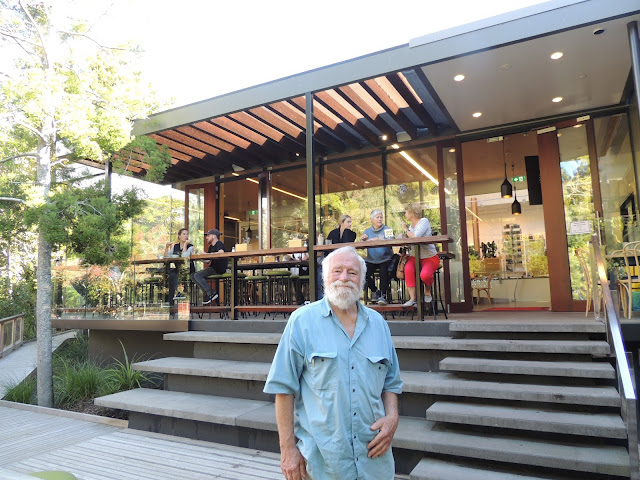 Now we're heading for the walkway along the Matai River, which should take us all the way to the wharf, where the people who are renting us our caravan have a boat birthed.

The Maitai River, originally known as the Mahitahi, has long been significant to Mäori. For the many tribes who journeyed through the area, over a period of some 800 years, the Maitai has been a river for food gathering and a ‘highway' to access the hinterland; it is considered sacred as a provider of mahinga kai.  Eels, an important food source for Maori,  were plentiful in the area of the bridge when it was only swampy marsh and the area is rich in historical significance to both Maori and European settlers.  The nearby Queens Gardens was once a traditional roto tuna (eeling ground). The ground was an ox-bow lake, formed when a bend in the Maitai River was cut off from the main flow.  The eel designs on the bridge are intended to raise awareness of Maori customs and history around eel harvesting. 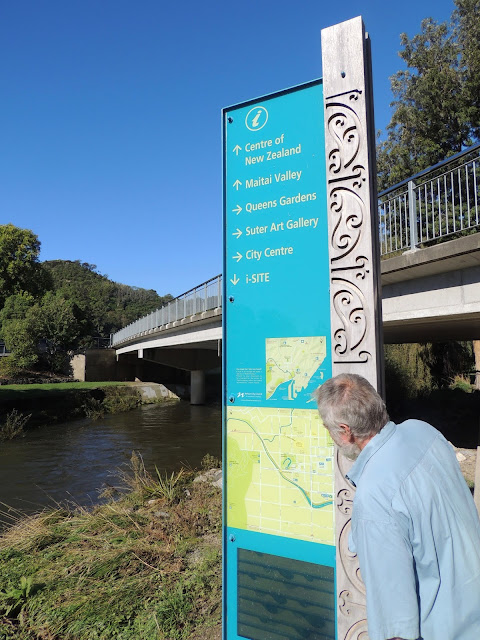 With all the cyclone-driven rain, this river's boiling. 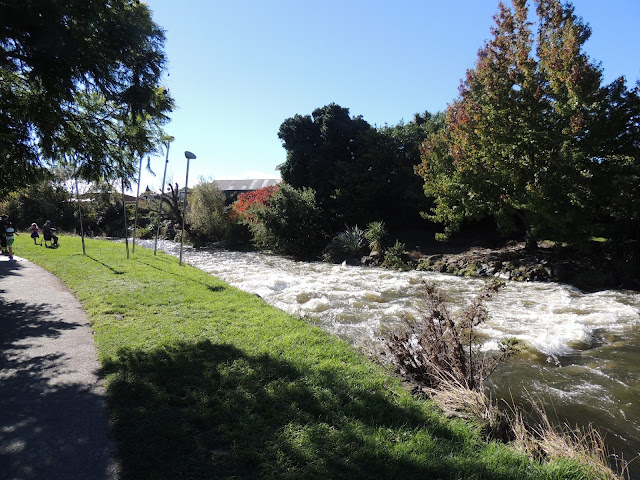 Several million in improvements were made a couple of years ago and the walk is very pleasant, with sculpture dotted along the way. 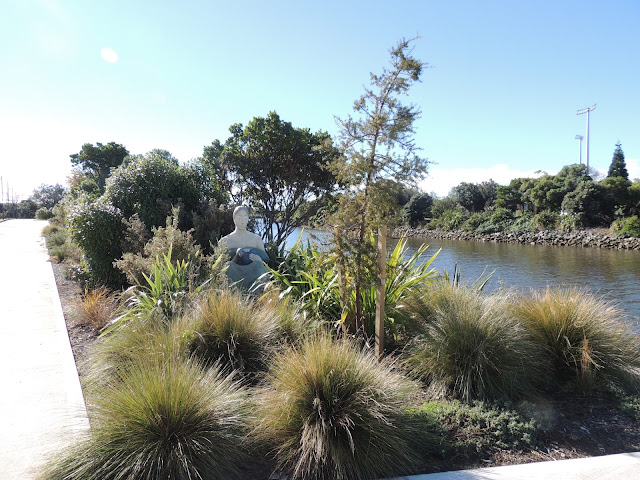 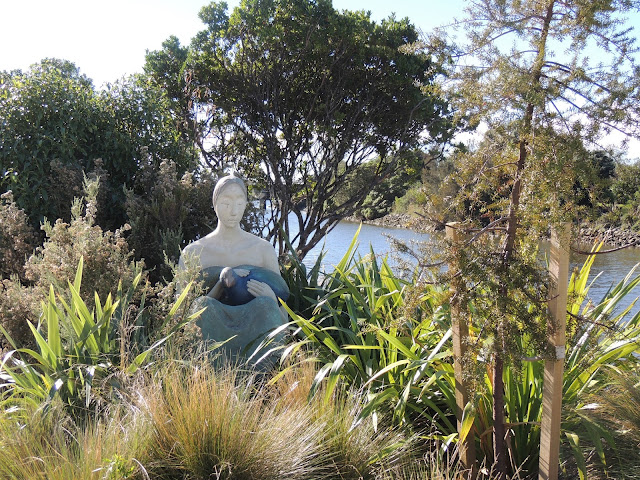 This is a longer walk than I expected, but a wharf is always of interest. 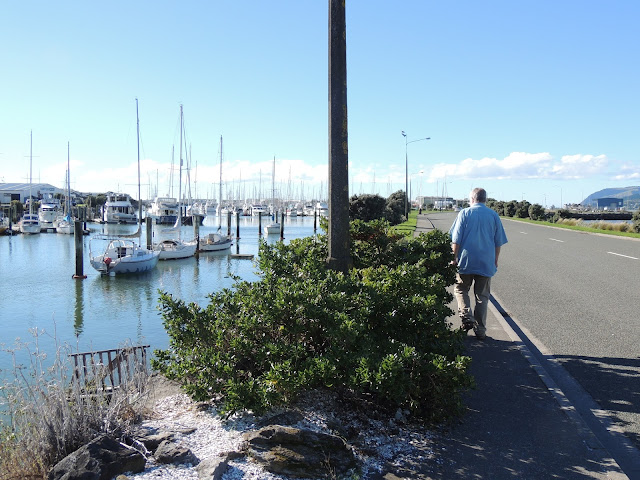 Here's Jeff and Katie's wooden boat, which they lived on for six years after leaving the UK and settling here, sailing to New Caledonia, Tahiti, and other distant ports of call. Their children were babies on this vessel. They're not here today (they're busy renting caravans!), but they told us where to find her and we have a good look around. 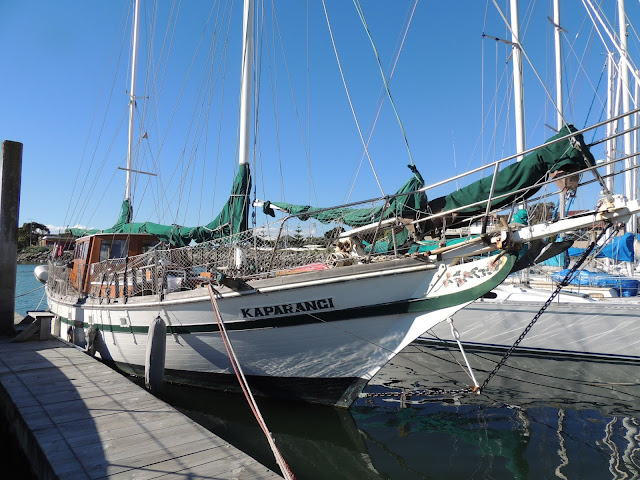 A most enjoyable amble, 8.5 miles according to Art's fitbit. Whew. We did another five today, Sunday, and more about that tomorrow. Sleep well, campers. 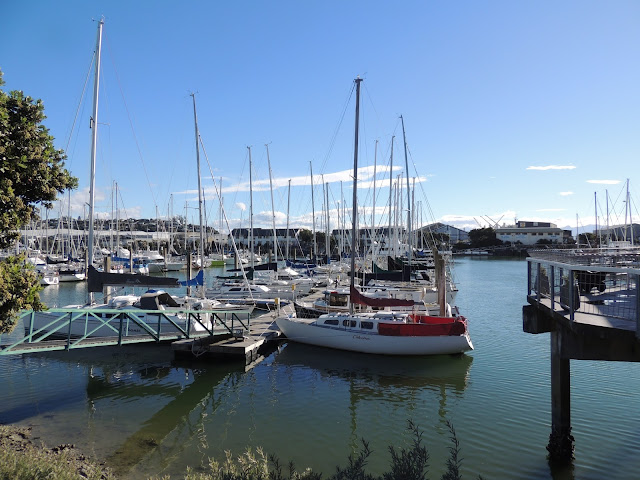