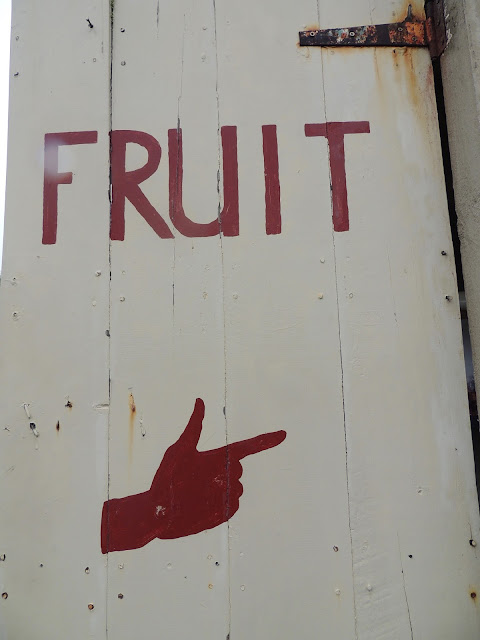 Another whopper storm is bearing down on NZ--one of the worst in generations--as the remnants of cyclone Cook approach. This storm is taking a whack at the North Island, which can ill afford it after the flooding caused by Cyclone Debbie just last week. States of emergency have been declared.

We're in a fine (if wet) position outside Nelson at the top of the South. Here's a Guardian story describing the storm situation, though as I write I'm hearing Auckland was spared a big hit. Tomorrow, Friday, is the first of the four-day Easter holiday here, and merry makers will surely be diverted.

Yesterday we shopped for food at a sweet little organic grocery in Nelson. 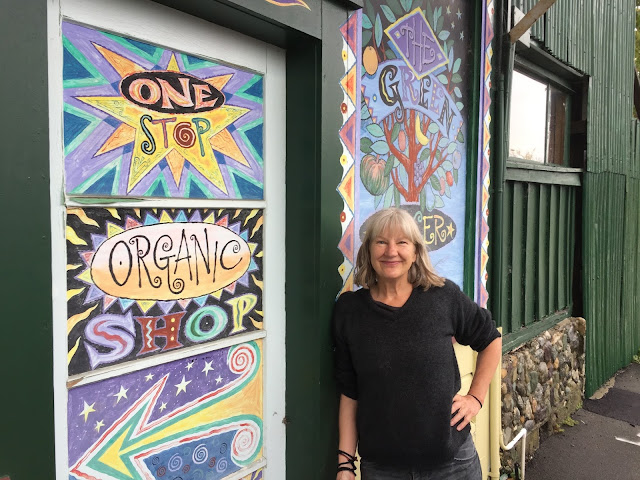 Also stopped in at a bookshop, Page and Blackmore, new to us. They're an independent 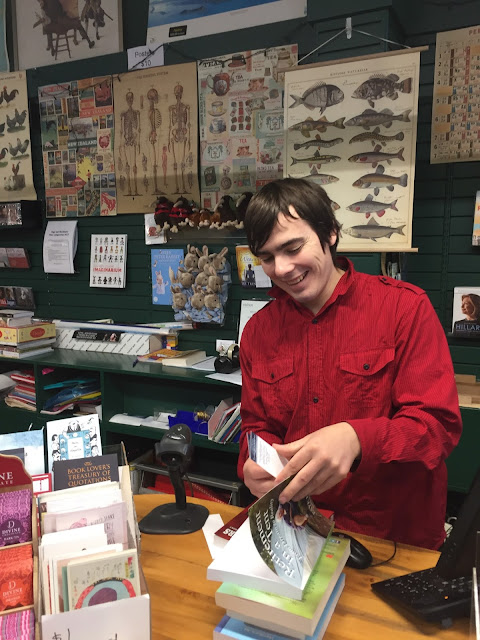 We got the Rover freshly licensed and then drove west to Tasman, on the Ruby Coast, a gorgeous series of communities west of Nelson known for its coastline, artists' studios, vineyards, orchards, and historic countryside called the Moutere Hills--home to the oldest pub in NZ, The Moutere Inn--where we'll connect with our caravan rental people tomorrow to review options.

After driving in a pounding rain, it was time for a relaxed lunch at Jester House Cafe (best cafe in NZ 2013/14), which we wrote about in 2015, tame eels and all.  Fish chowder for Art. 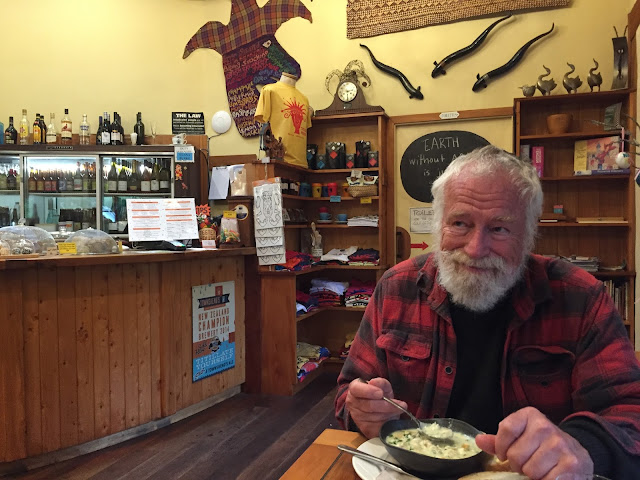 Gurnard and salad for me. Jester is worth a return visit and it's just down the road from Roger's sweet accommodation Tasman Green. 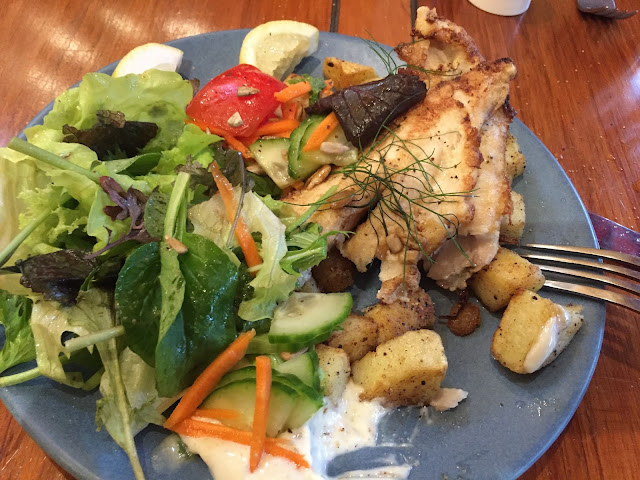 An impeccable and well designed studio (formerly garage) built out by the owners for their daughter, who wasn't ready to leave altogether, but also wasn't happy about staying. Now it's a rental. 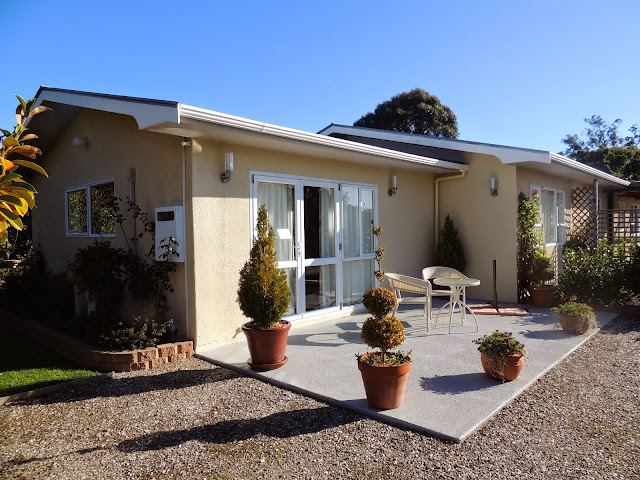 We liked it so much last time we returned. 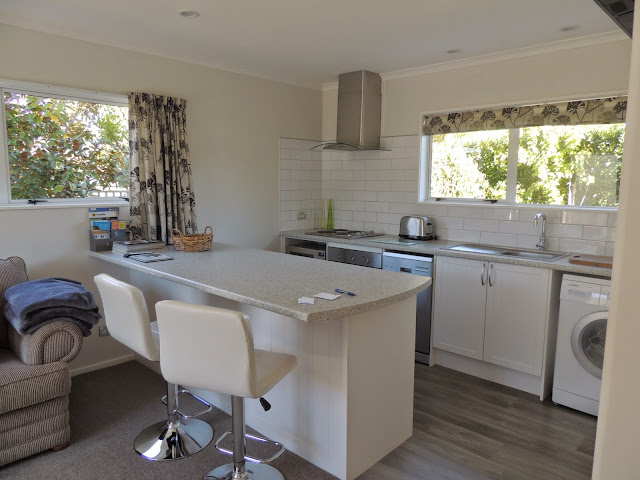 Plus we enjoy the ever-affable Roger, dressed here for trips in the rain between his house and garage workshop. 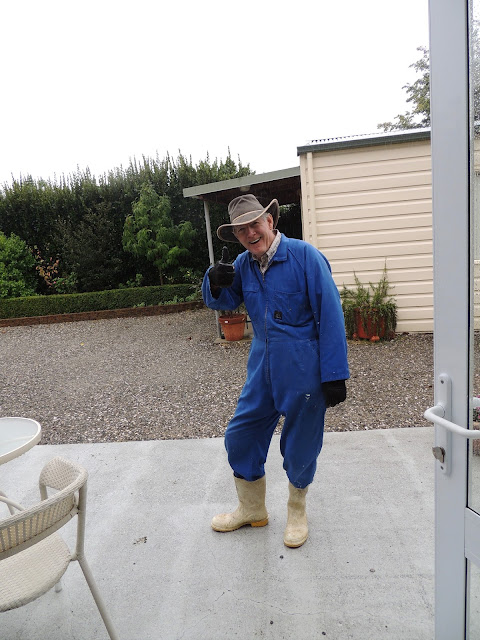 There are lemons and tangerines growing in the yard. 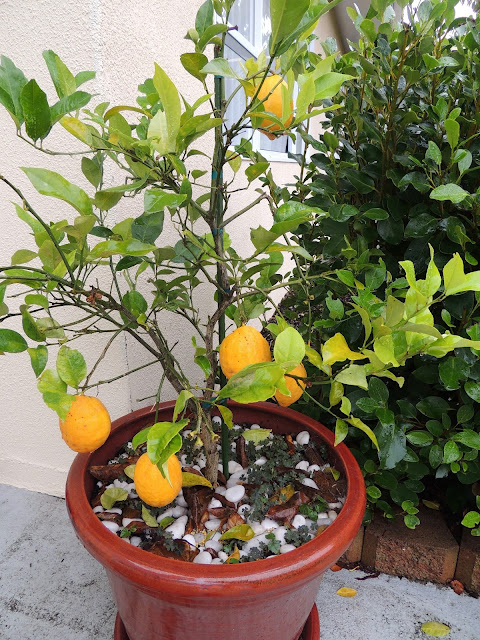 Plus something Roger called a lemonade fruit, a cross between a lemon and grapefruit, right there in the center. It was yummy. Those green oblongs are feijoas, which taste like perfume and are oddly seductive. They grow like crazy here. 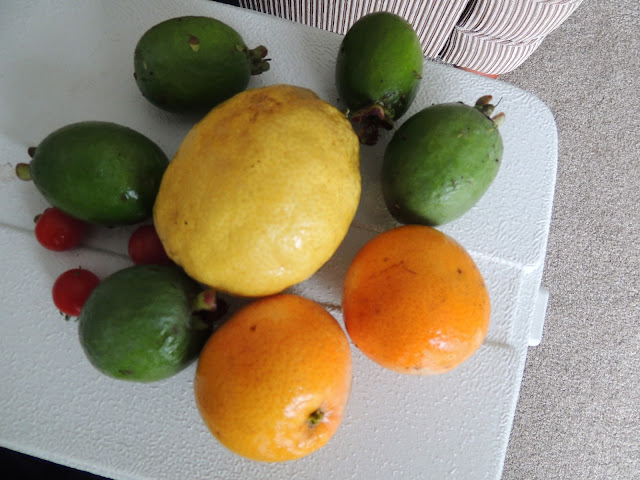 Between rain showers, we walked a bit. There's an apple packing outfit just on the corner. 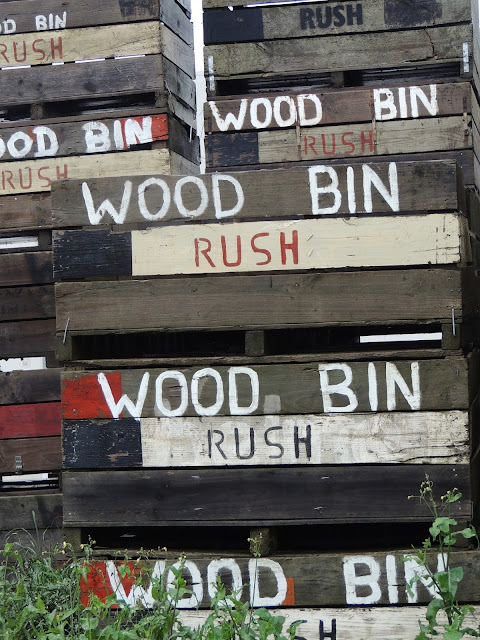 And down the road a piece, the studio of a talented weaver and her woodworking husband. 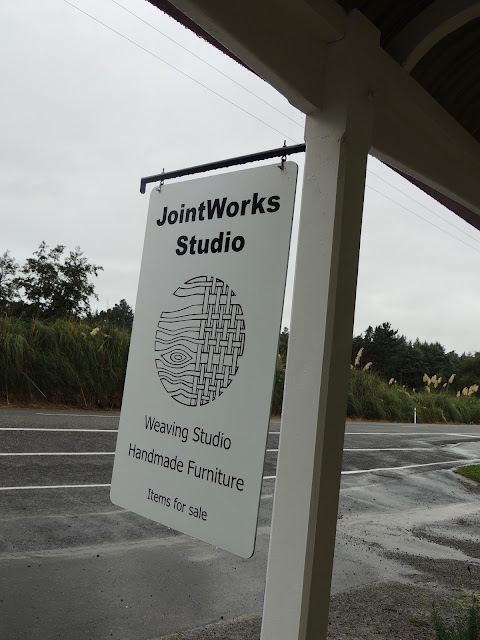 Jane showed us her loom, under computer control for the design but otherwise worked with her feet and hands. 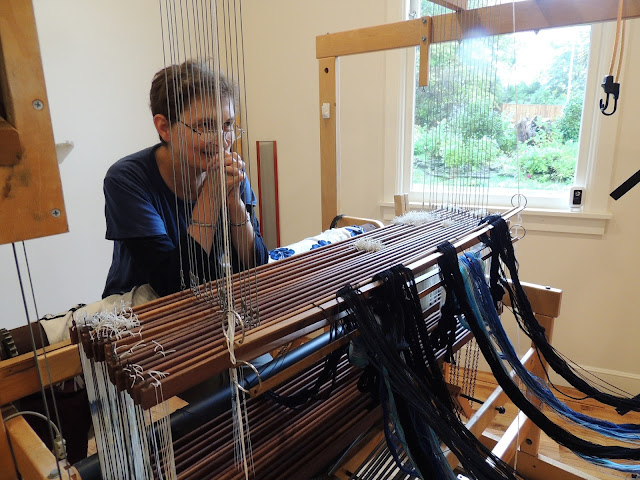 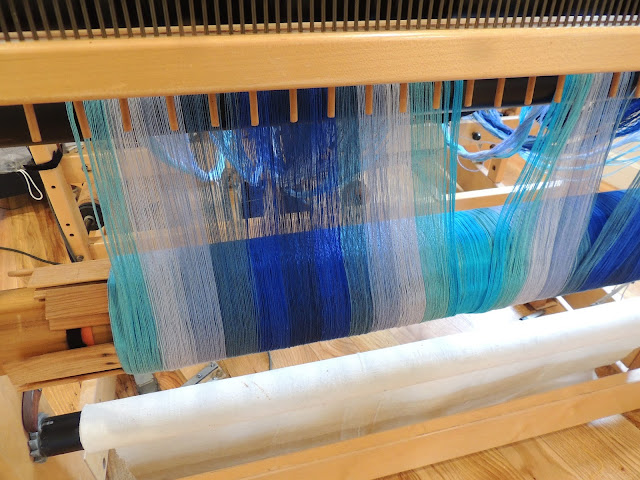 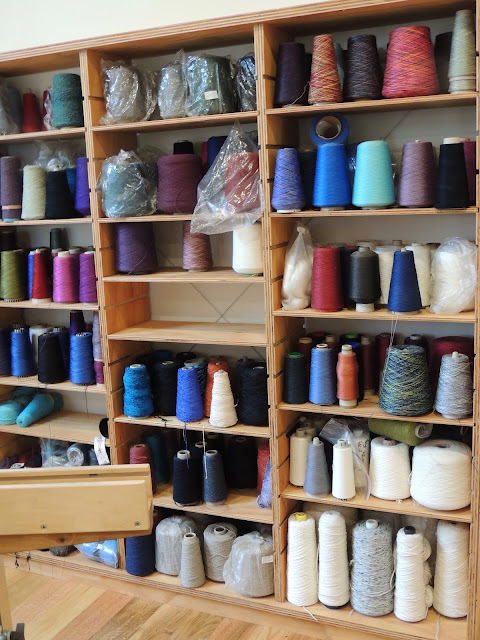 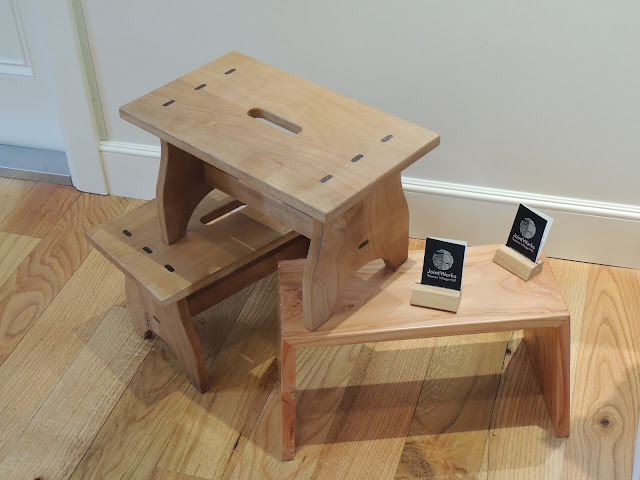 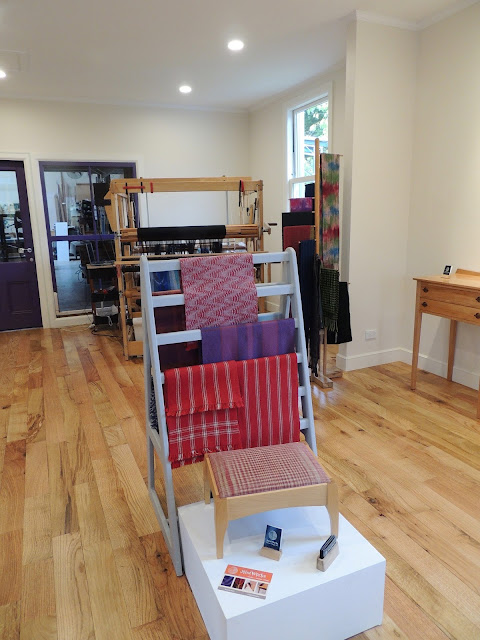 I found a scarf of silk and tencel (which comes from wood pulp) with a beautiful hand. It looks like Christmas but the green is actually blue. As autumn arrives in NZ, it should come in handy. 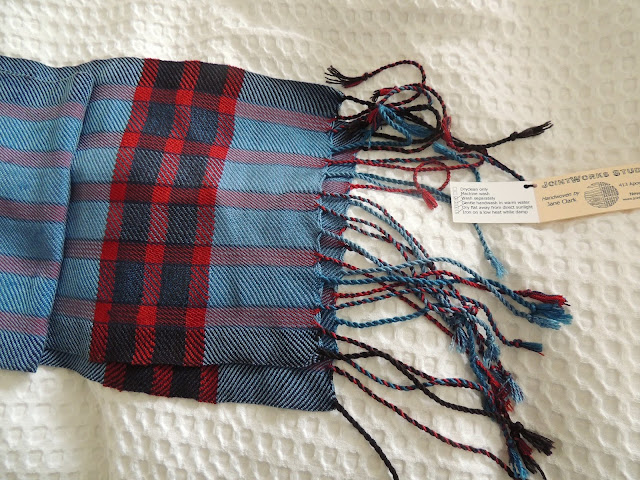