Little wonder the Abel Tasman Coast Track is one of the most popular of NZ's Great Walks. It's utterly accessible. We wrote about our 2015 walk here, including pictures of the impressive new overnight campers "hut." 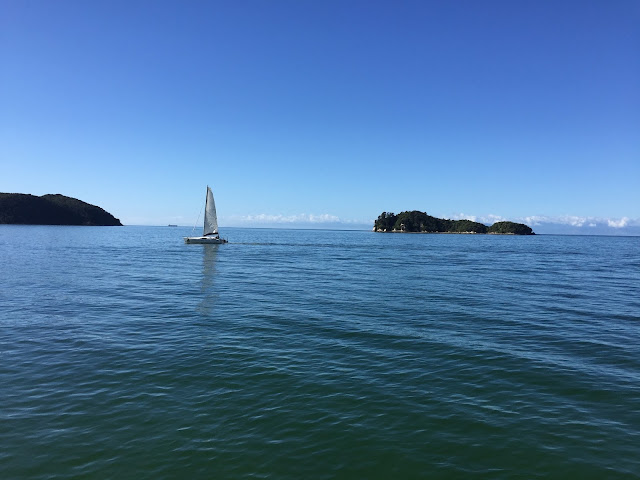 The Abel Tasman National Park is New Zealand's only coastal national park – and its golden sandy beaches and clear turquoise water make it one of the most popular. The sheltered bays are popular for cruising, sailing and sea kayaking. On land, the Abel Tasman Coast Track follows the coastline through lush native bush, over limestone cliffs and along golden sandy beaches. This is one of the Department of Conservation's "Great Walks". The 53km track can be walked in its entirety over three to five days. Smaller sections of the track can be easily accessed by the network of water taxis operating from Kaiteriteri and Marahau in the southern end of the park, and Totaranui at the northern end.

Where we're staying, in wee Kaiteriteri, there are several operators who will ferry you to different drop-off points on the coastal trail and pick you up later, either at that location or another one you hike to. You can also kayak or take a sailboat or even fly in. Here's part of the group lining up to board. 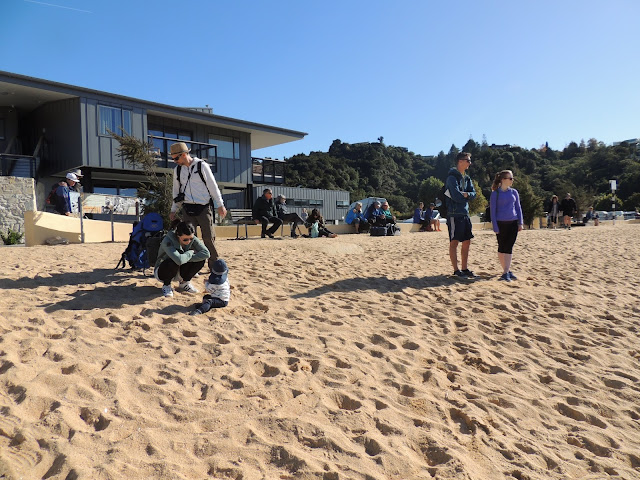 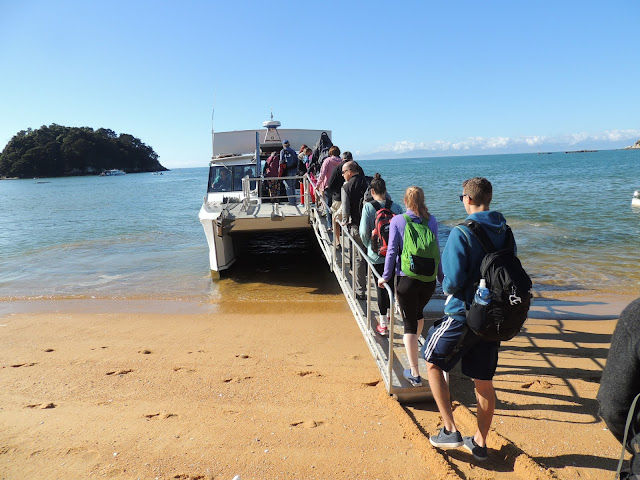 You can walk the whole trail, certain segments, or, as our neighboring campers told us the other day: we like to take a few bottles of Champagne out to Anchorage and stay there for hours on the beach. Why didn't we think of that? Kiwis know how to live...and are the loveliest people. 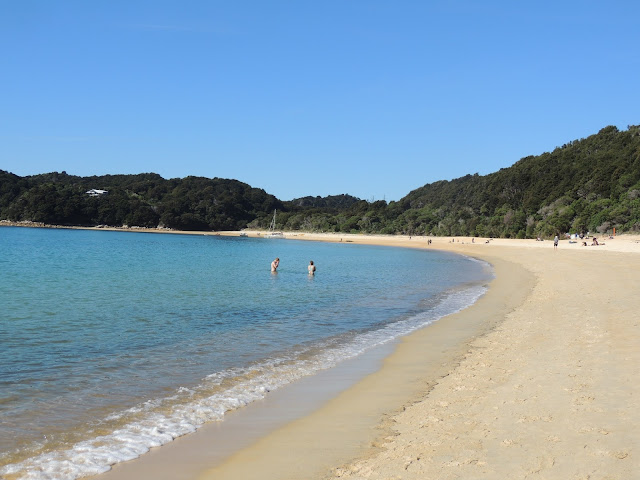 I had to laugh at how many of you commented on the coffee cruise photo yesterday. In fact, when you sign up to be taken out to the coastal track via boat, you get a bonus mini-tour in the process, always with a pause at Split-Apple Rock. The captain says it's 100 million years old and probably split when water infiltrated a vein of quartz running through it and froze, expanding and contracting. 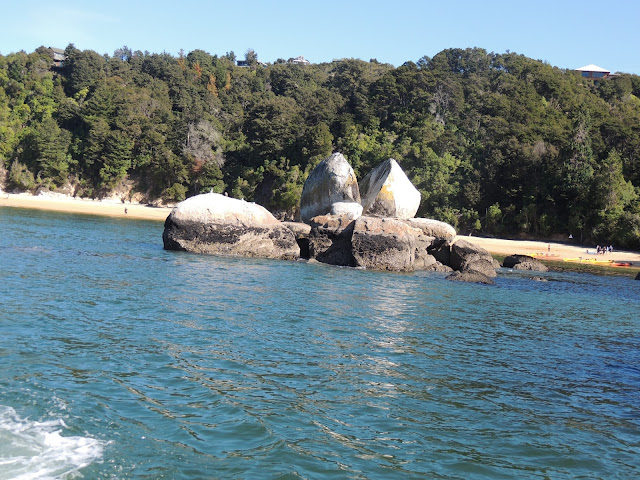 The seals lounging on Adele Island are another highlight. (No coffee, though.) 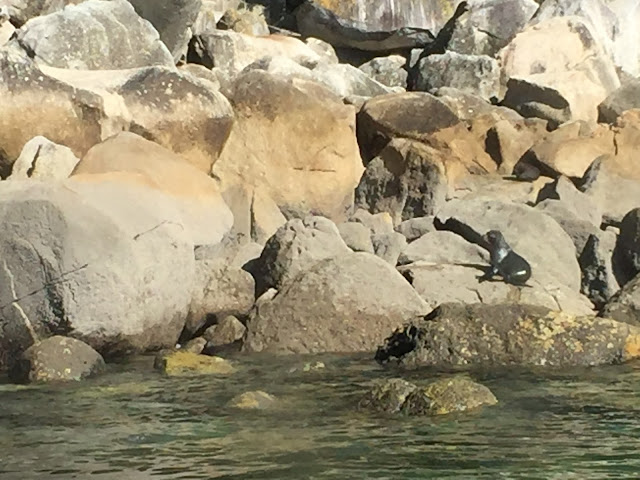 There's a backstory to our trip to the Anchorage drop-off. When we were in Nelson City and walked 13+ miles over two days, I bunged up my left hip somehow, so that walking the wrong way produced a nerve-jangling yelp. My own rx for this was rest, something I'm discouragingly poor at.

Benefits of not walking: muffin and flat white
(FYI, this is a taut, masterful Le Carre from 2013, found on the camp's free shelf.) 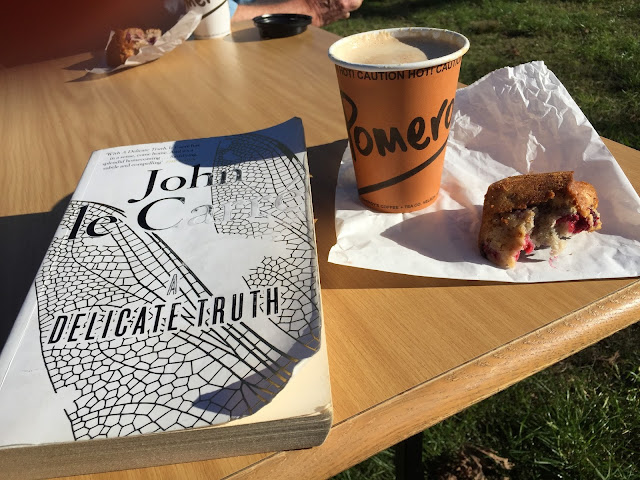 No walking? I was not the happiest camper, but after a couple days the pain eased and I hatched a plan, based on the Champagne people's concept, to take a boat out to one of the drop-offs and just wander a bit without purpose, which I'll add is challenging for both Art and me, we who prefer a destination. The wandering started off uphill, and no body parts screamed at me. 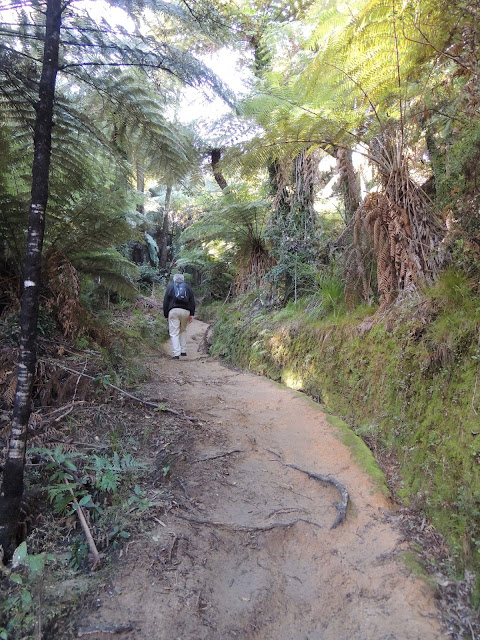 We ended up walking around a low-tide area, fascinating it its own right for the temporal nature of it all. 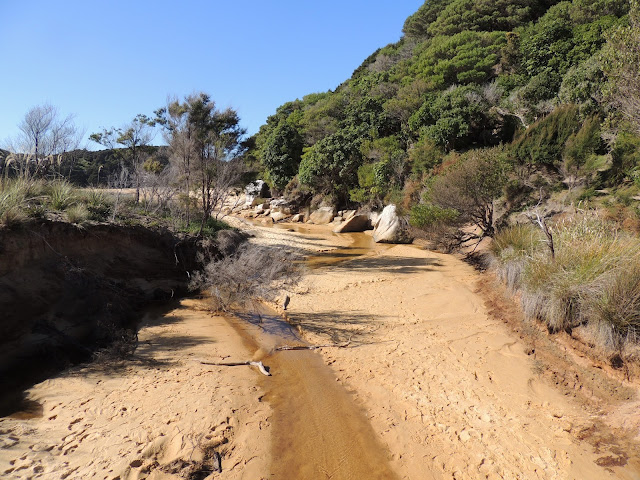 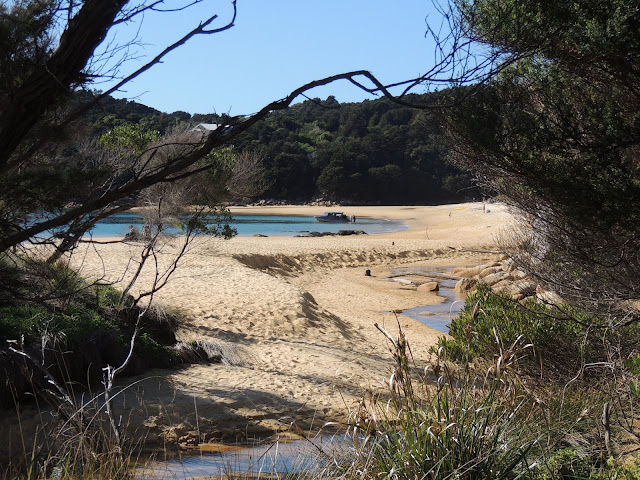 Met these three German guys on the trail. They were psyched and happy to be walking the entire track. 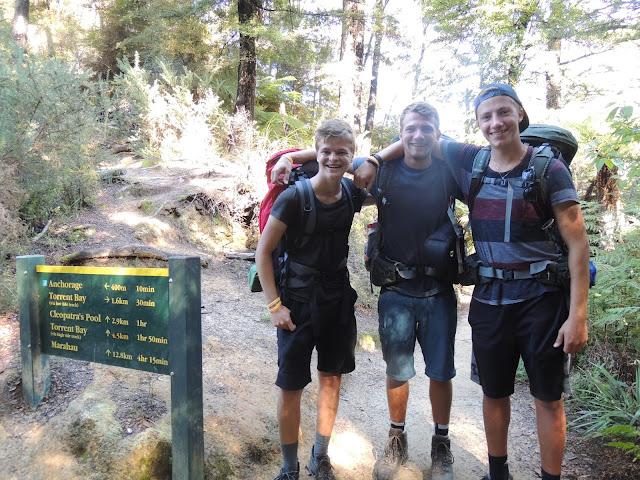 Snack time is the best time. 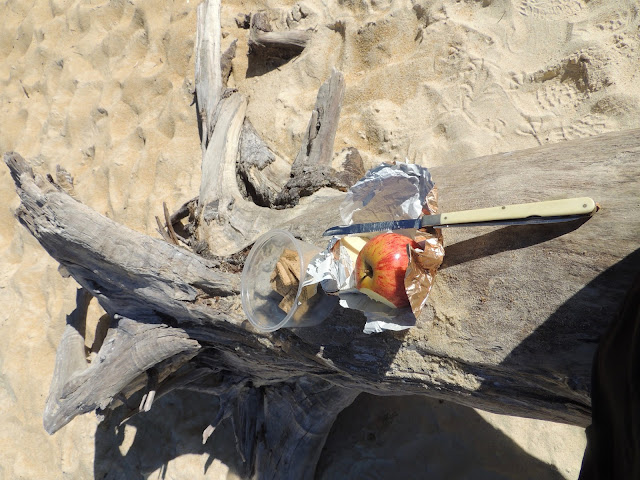 Back to the beach to meet up with the boat. 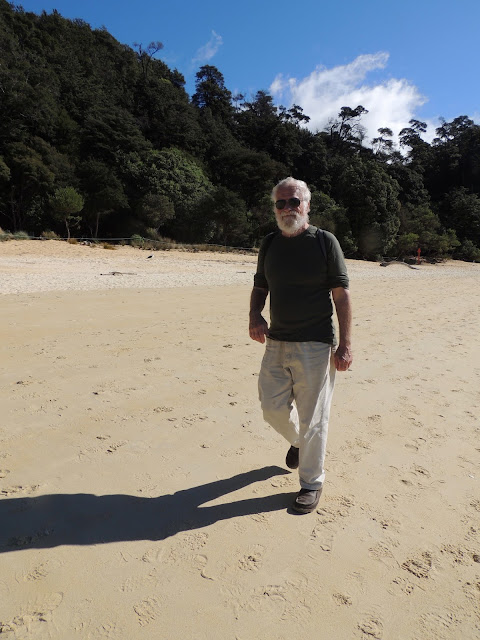 Our wander earlier this week was fun, but we'd like to do a proper hike, so tomorrow we'll take the boat up to Tonga Quarry and walk to Awaroa, just a couple of hours. There's a great-looking lodge up there (click here for info)--not a hiking hut--that we thought we'd explore until we learned it closed for the season...two days ago. No worries, though. We'll be walking a fresh piece of this magnificent coast. 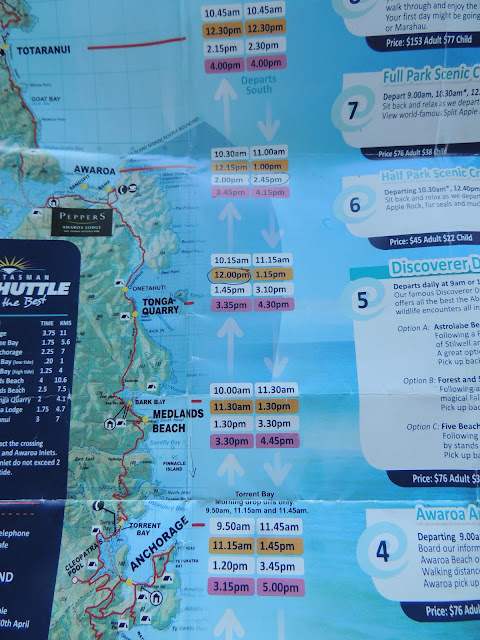