August in NZ: Four Inches of Snow at Lake Tekapo

We awoke Saturday morning to four inches of fresh snow. August in NZ! 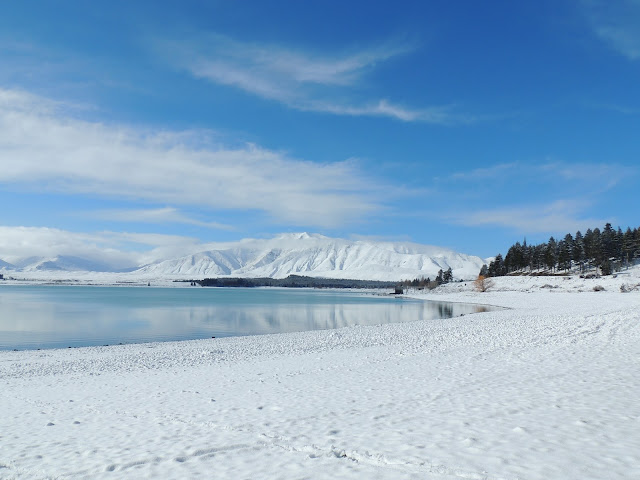 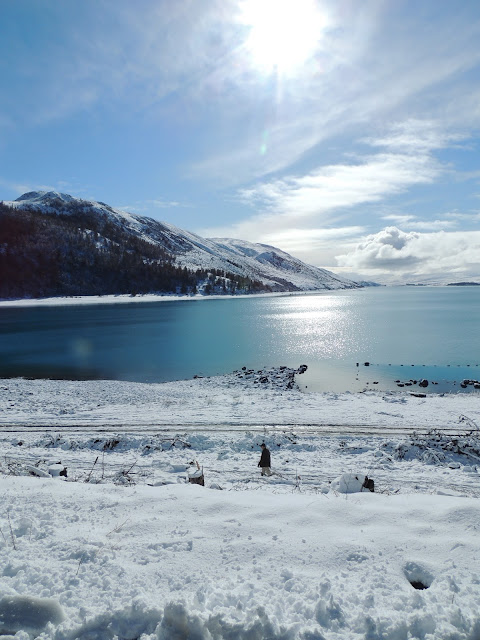 Well here's a first. Art clears the caravan windows with a plastic dustpan. (Note all the campervans,  many people here for the skiing.) 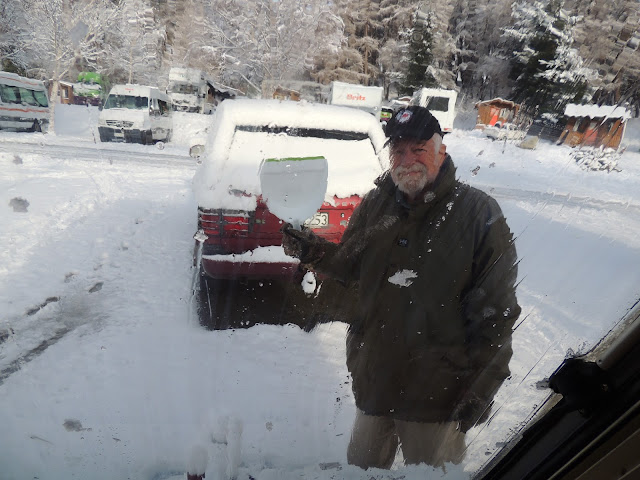 For we who are accustomed to spending most of our time in the Northern Hemisphere, it's tough enough to acclimate to the reverse seasons (remind me again why we're eating store-bought tomatoes in August?) But this is true dissonance. Beautiful, though, and warm with the sun out. We had fun tromping around in it all day. 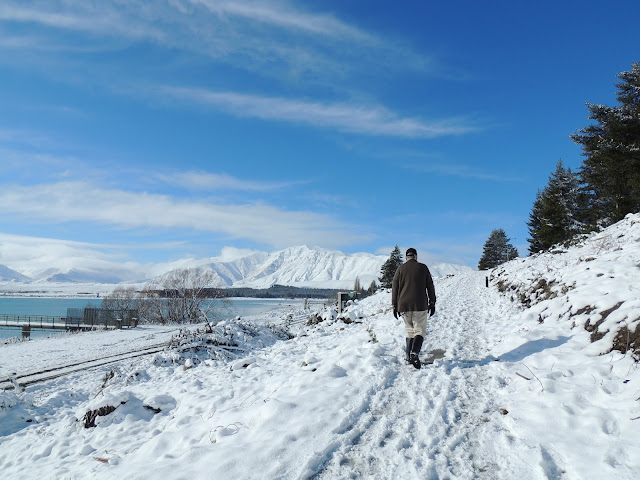 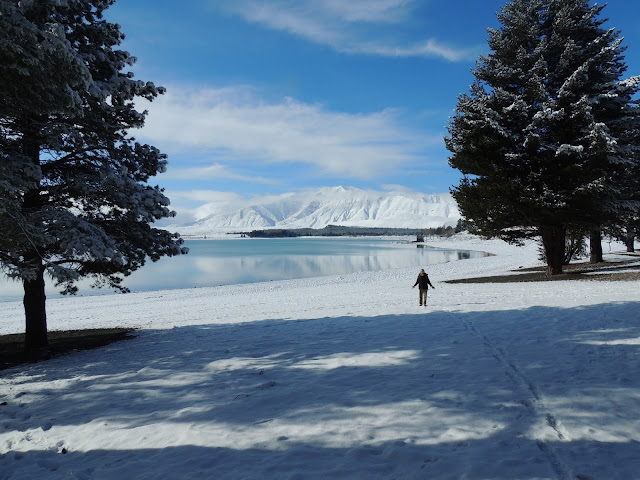 Maori were the first to venture into the Mackenzie Country, where they hunted moas, birds and eels before returning to the coast for food and trade. The capture of Scotsman James McKenzie in 1855, for being “in the company of a thousand stolen sheep” as he rustled them with his dog Friday,through a remote alpine pass into “a plain of immense extent,” resulted in his deeds being immortalized and his name, albeit with a spelling change, applied to these highlands ever since.

Lake Tekapo Police Station
(is it just me or does it look like a summer rental?) 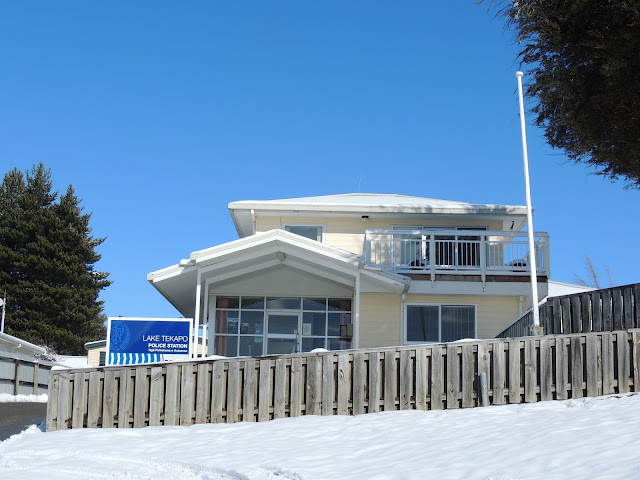 On the shores of Lake Tekapo stands a bronze statue of a NZ collie sheepdog. 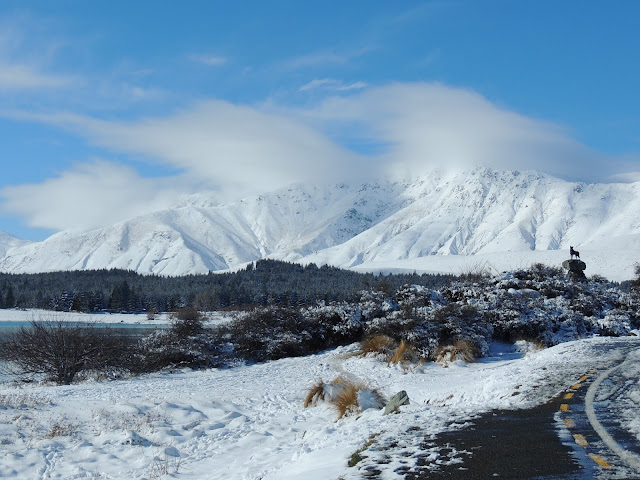 The statue was commissioned by Mackenzie Country residents in recognition of the indispensable role of the sheepdog in their livelihoods. The sculptor was Innes Elliott of Kaikoura, with a dog called Haig, belonging to a neighbour, being the model. Elliott reported the sculpting process took approximately fifteen months. Clay for the model came from the insulator works in Temuka, with a plaster cast of it made and sent to London in 1966, where the statue was cast. 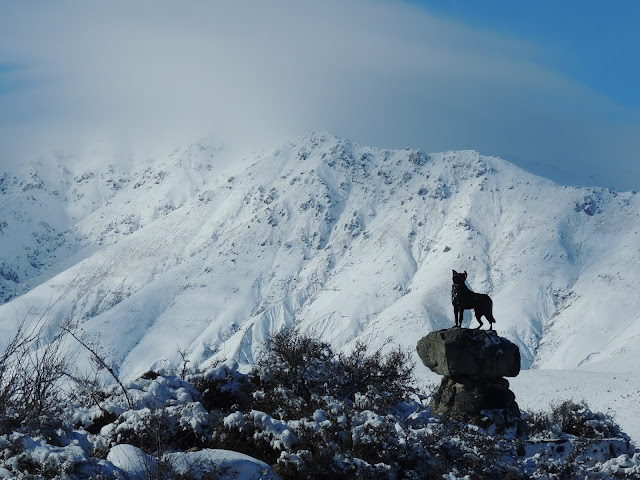 On the nearby horizon is the Church of the Good Shepherd, said to be the most photographed church in NZ. 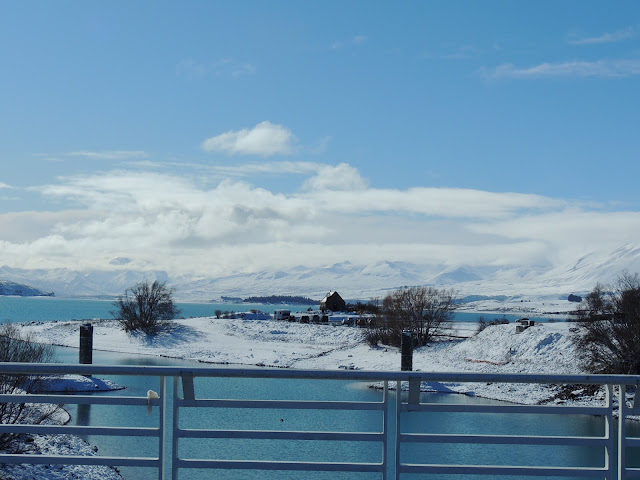 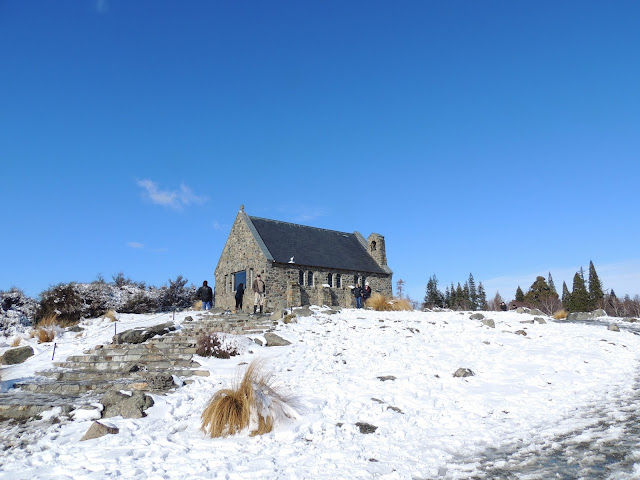 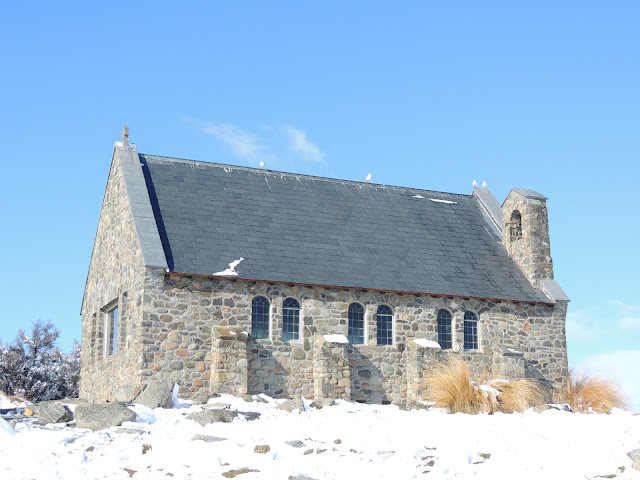 The Church of the Good Shepherd was built in 1935 as a memorial to the pioneers of the Mackenzie Country. Congregations of three faiths worship regularly in the Church. 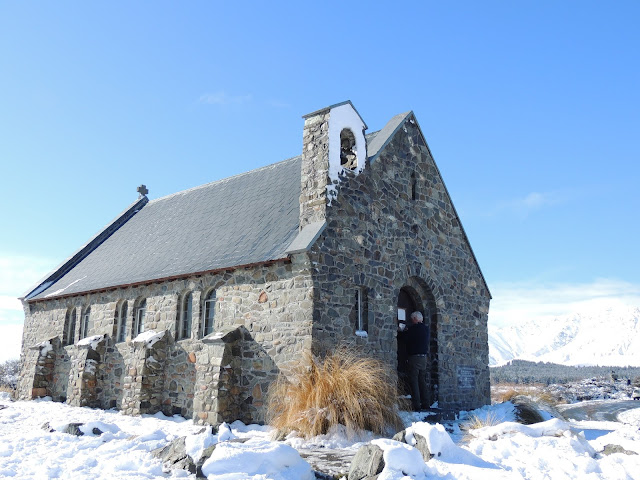 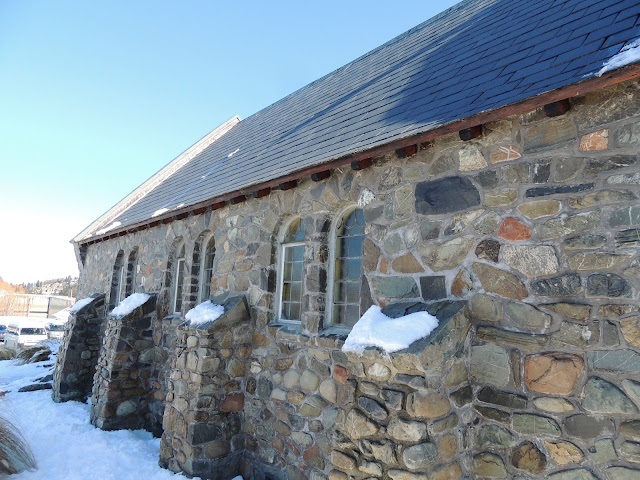 The church's altar window frames the glorious view across Lake Tekapo. "We can't have everyone tramping through here in their wet boots," said a man putting up a CLOSED sign on the door. I placed my camera lens to the altar window for a glimpse inside. 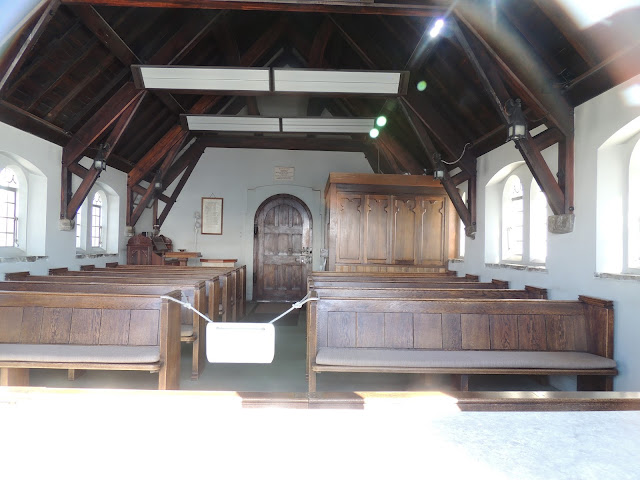 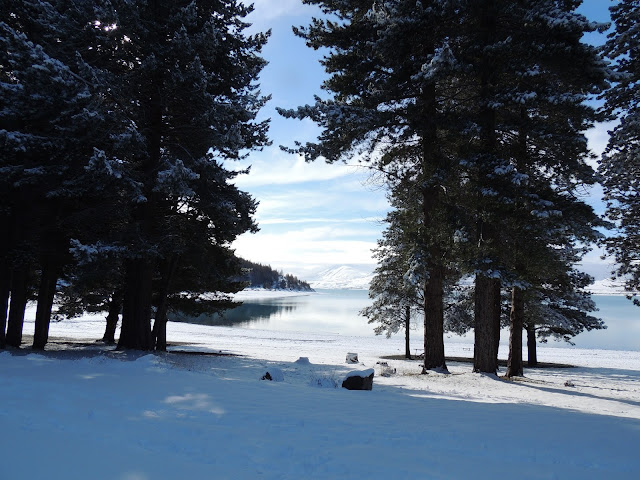 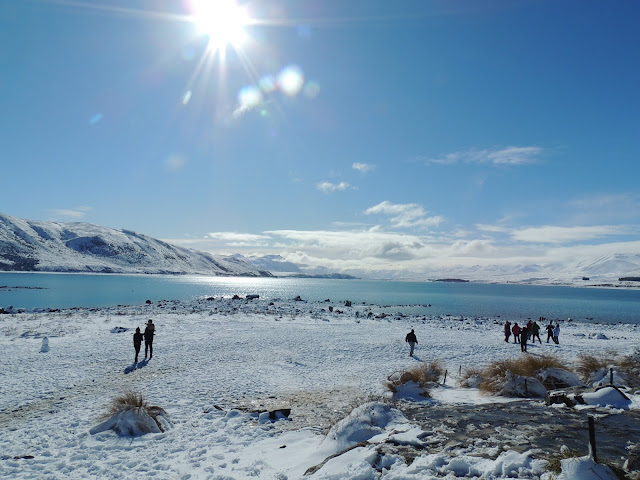 The Queen of Flat Whites needed a caffeine boost, so we stopped at one of the few restaurants in tiny Tekapo village. The view from the dining room almost made me forget about the coffee. 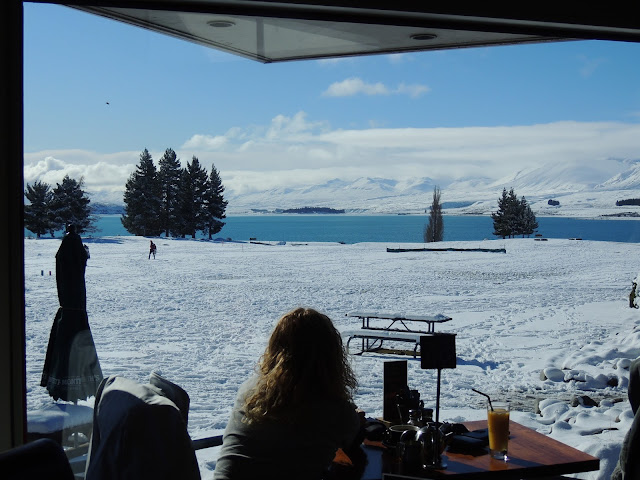 From under a blanket of snow, to all a good night. 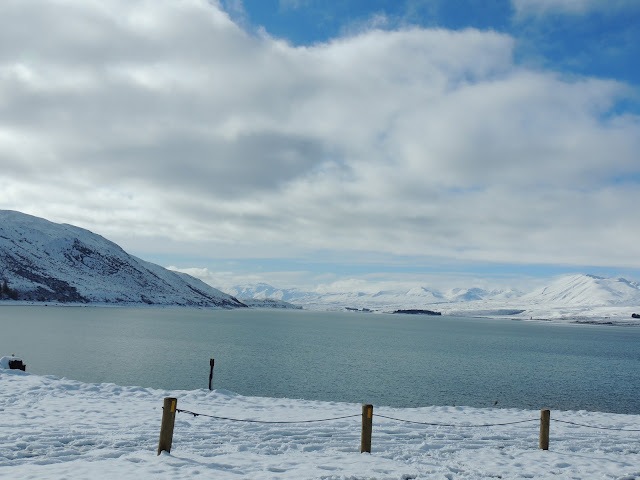