Golden Bay has its tentacles into us, that's for sure. After nearly two weeks here, we're still discovering new field trips every day. And new landscapes. Today's trek to Rawhiti Cave was recommended by Cheryl Orange at Orange Mechanical, who helped us ship out the rim for its new tire. Orange also mounted the new tire when it arrived. (Triple A is called AA here, and Art was smart to sign on back in Auckland when we first arrived. AA paid for the tire mount.) 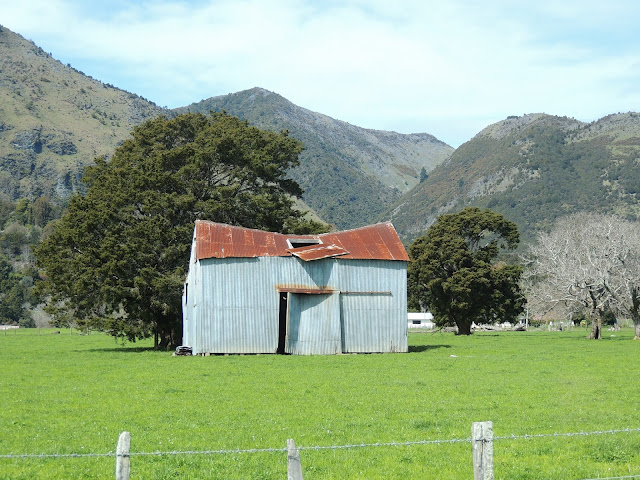 Spring is truly bustin' out all over. 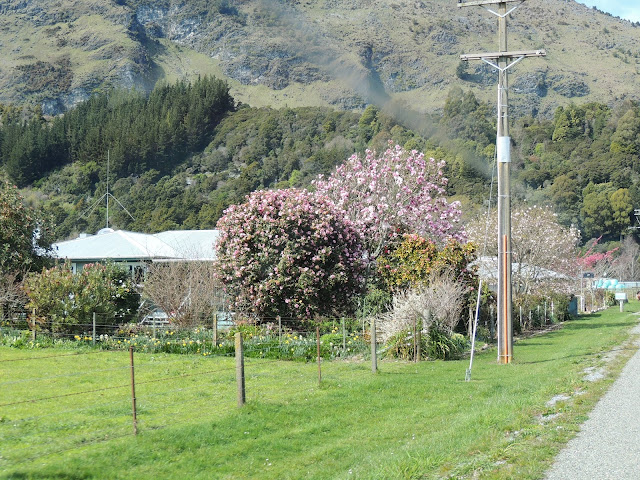 The air here is like a tall drink of cold water, perfectly clear and refreshing. 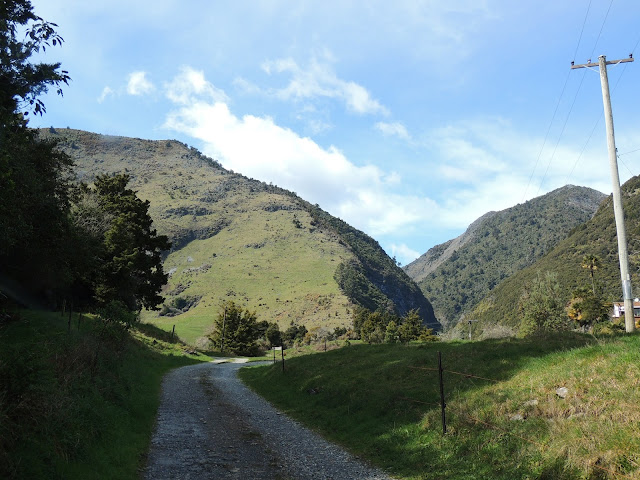 As usual, we're driving across a farm to reach the cave, opening and closing livestock fences along the way. 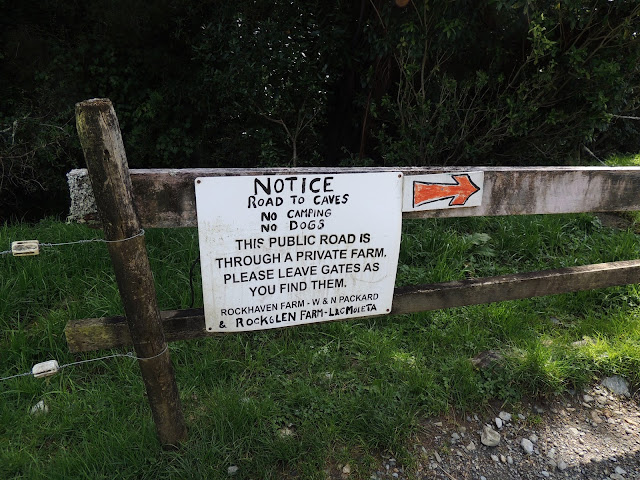 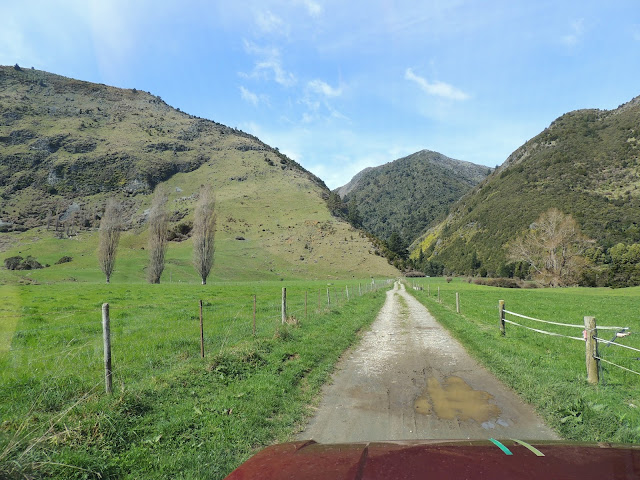 Our trek started innocuously enough. It wasn't until later that I recalled Cheryl saying to me: you guys are in good shape, right? 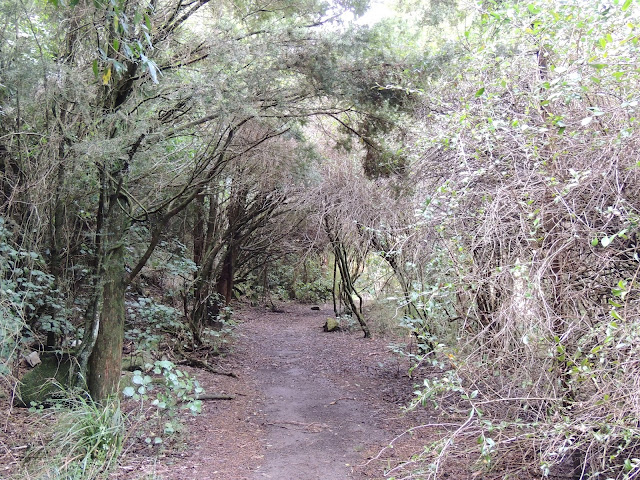 Soon it was clear this was not gonna be a walk in the park. Almost immediately we had to clamber over the boulders in this dry river (which is actually called Dry River) to get to the trail marker on the other side. 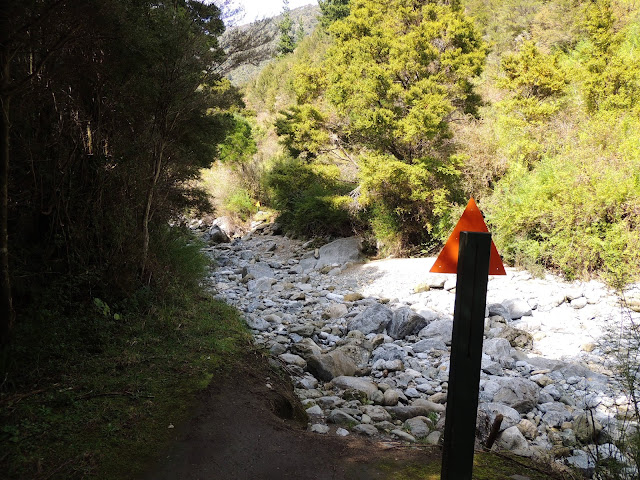 The path pretty much went directly up from there, with endless switchbacks (and endless sheer drops off the narrow path). It was muddy, with areas of slick clay and pudding-like goo, after last night's rain. Art's occasional leg issue was screaming at him halfway up. 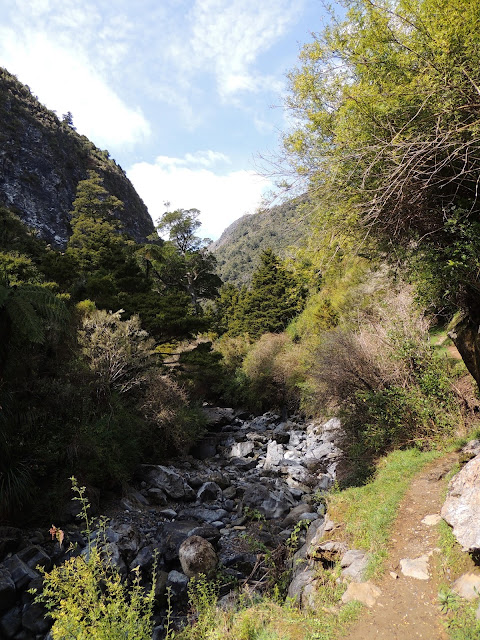 Do not linger at the cave entrance (after this climb, are you kidding?) 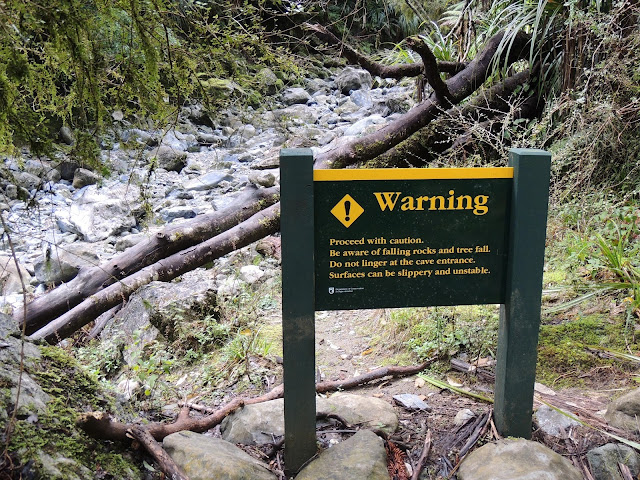 Here's a reasonable view of the vertical nature of the track. I'm just ahead of Art--not hanging off a cliff. 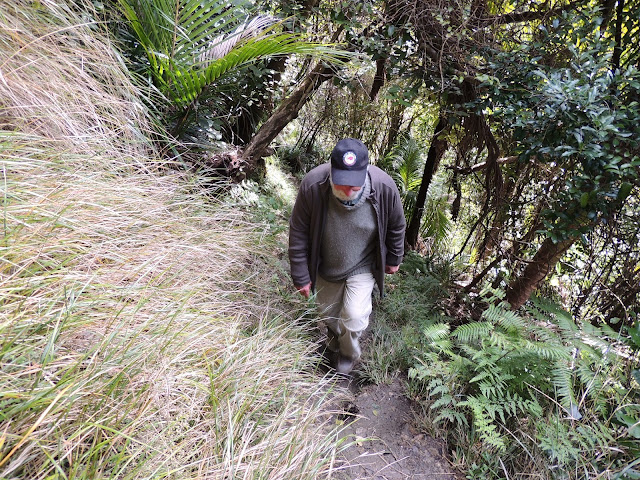 There was much scrambling over impediments. 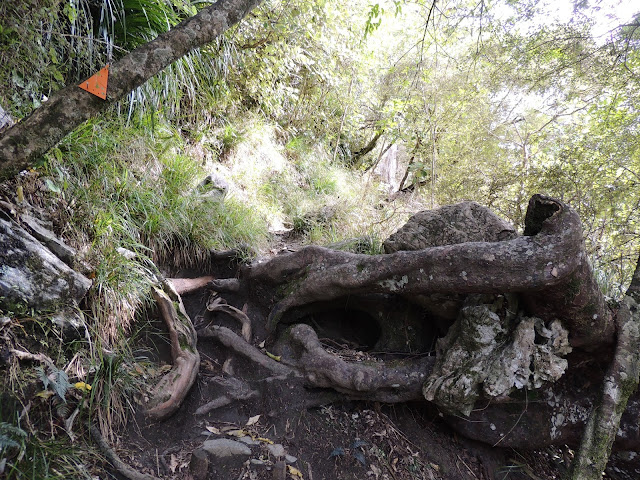 Honestly, I haven't had this much fun since I was a kid climbing trees with Kathy. Being outside and moving around obstacles is pretty much sheer joy. 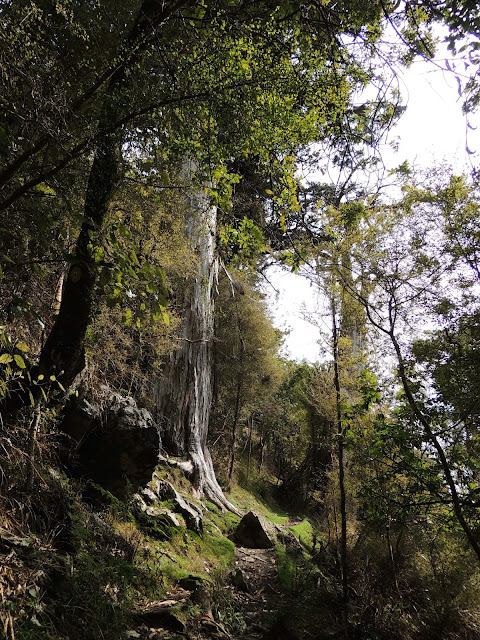 Can you see the path? Often it was a challenge. 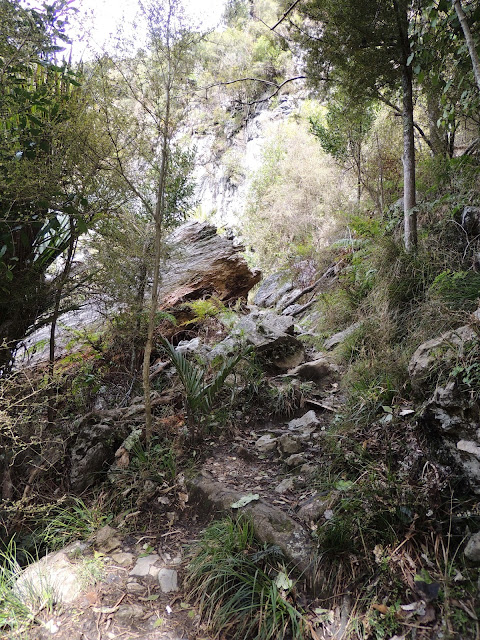 When we finally arrive, the enormous cave opening is worth the climb. Not an award-winning vid here, but E for effort to try to show you the cave's extent (trouble viewing click here). 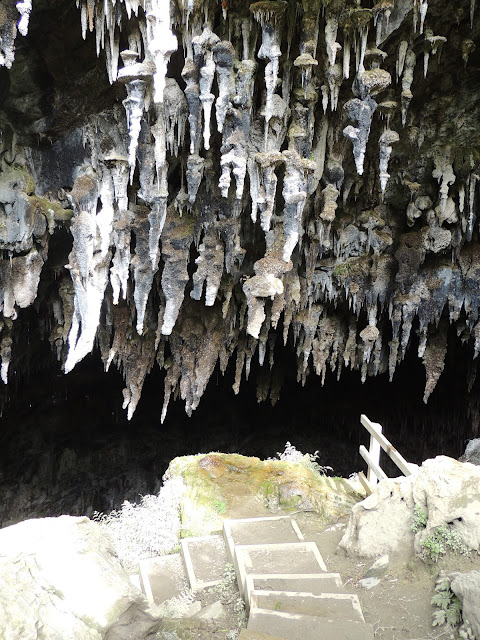 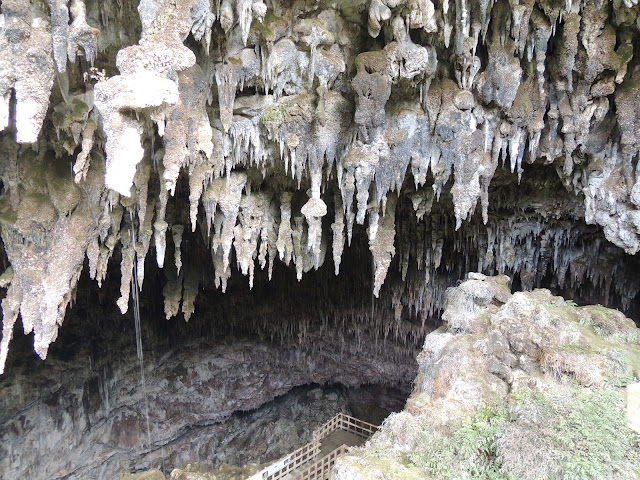 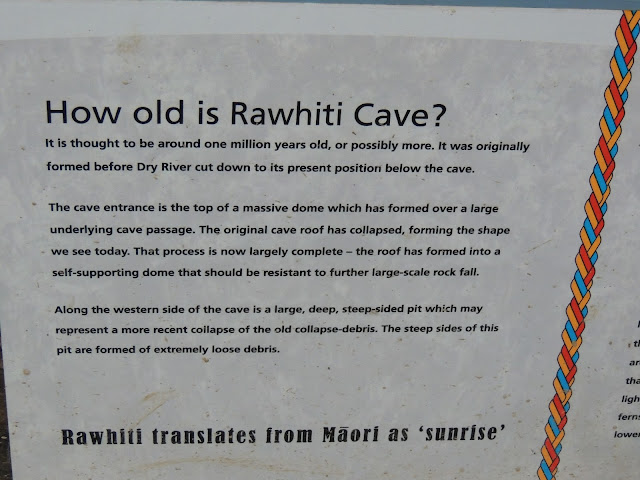 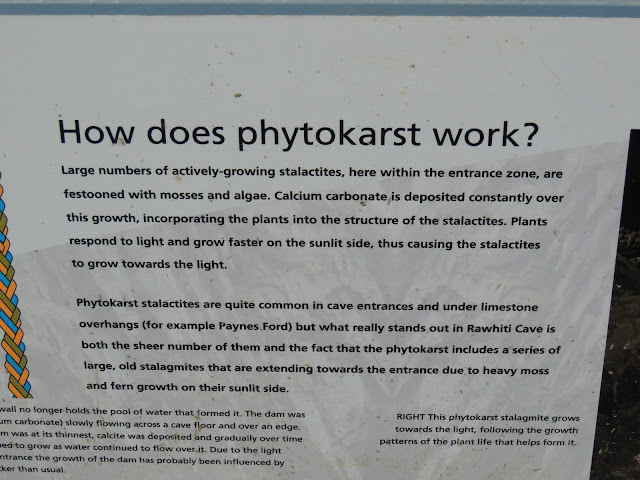 The group ahead of us. 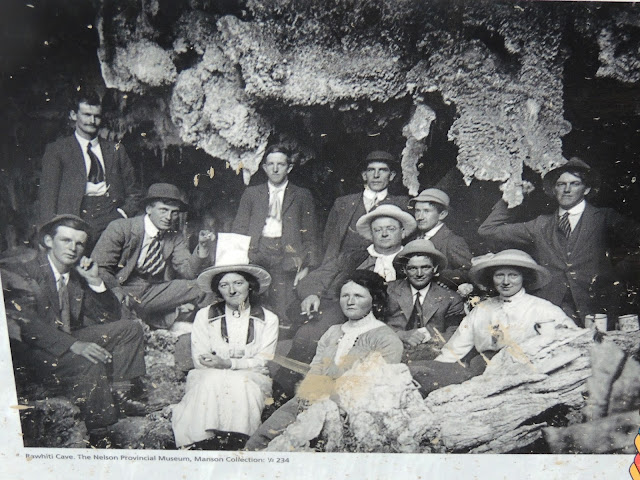 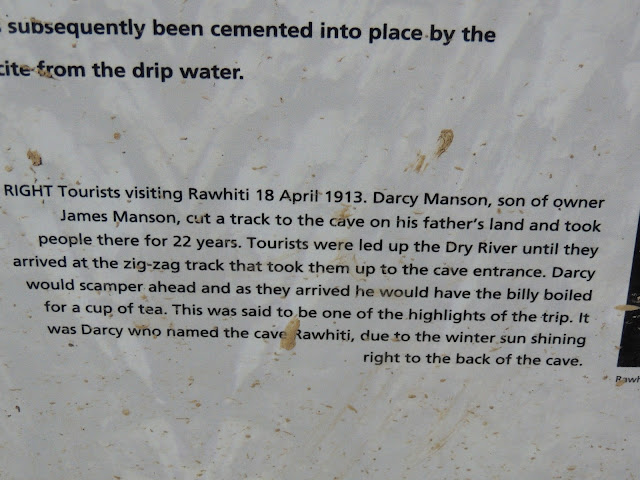 Walking down was almost equally challenging, gravity making it both easier and yet difficult to keep control of our steps.

Anyone ready for lunch? We are starving. And this is a big day as it's the first day of the season for Mussel Inn, what Fodor's calls "a quintessential slice of Golden Bay life, music, and craft beer." 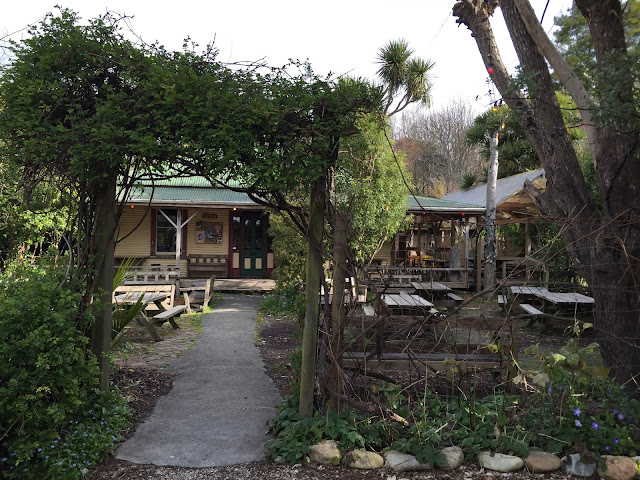 There's live music several nights a week and they also grow their own organic vegetables. Before we came here, I must have heard half a dozen people describe Golden Bay as a place for "alternative lifestyles." What, I wondered, did that mean in 2015? Apparently it means growing organic food and weed (eating the former and smoking a little of the latter), and being laid back. Hmmm. Doesn't seem all that alternative to me. 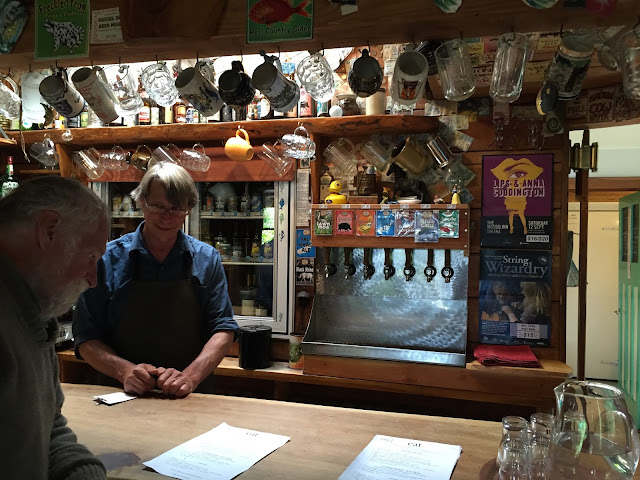 Mmm. Gurnard for me atop greens and garlic bread. Mussel chowder for Art. Someone already drank down her flat white. This food was excellent. 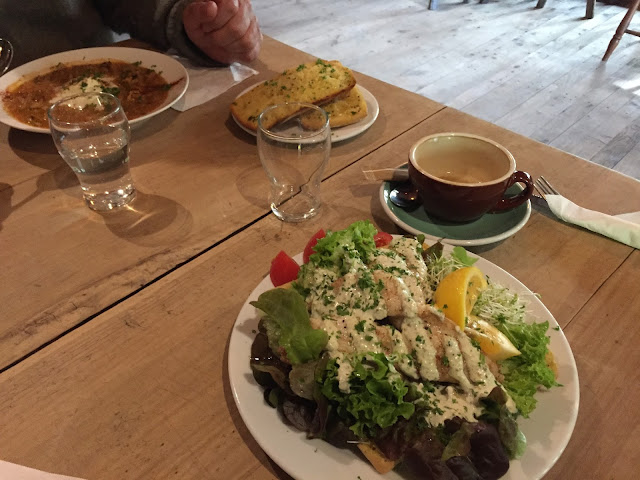 There's a chill vibe here, even though it's 3:30 and mostly empty. Soon, though, people wander in, happily ordering beers and talking to each other--and to us. Mussel Inn, like many places, has been closed for winter and this fine spring day is clearly finer for its open doors. While we ate, a man walked in who we recognized as one of our camp owners. We chatted about the nice work he's been doing on their bache building. 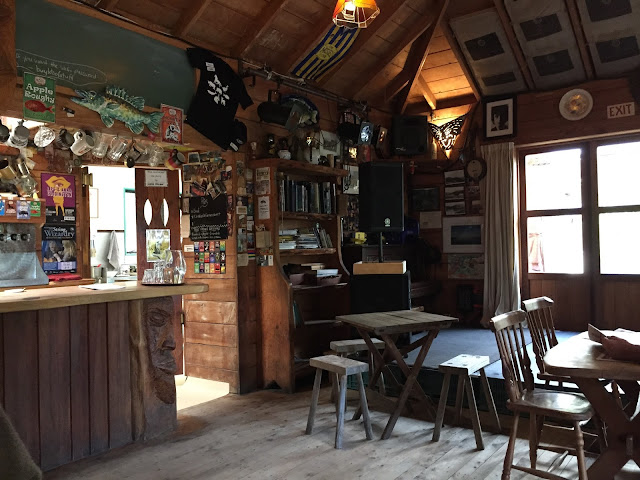 When we returned to the campground I went to the office to see Leigh and get a new internet code. "Did you go to the Mussel Inn?" she asked. Wondering how she knew, I said yes and told her how much we'd enjoyed it. "I dropped Wayne up there," she went on, "and he said 'isn't that Heidi and Art's Rover?'"

You know you've been in a small community for two weeks when people start recognizing your car. It's a friendly place. And the campground is looking beautiful this evening. 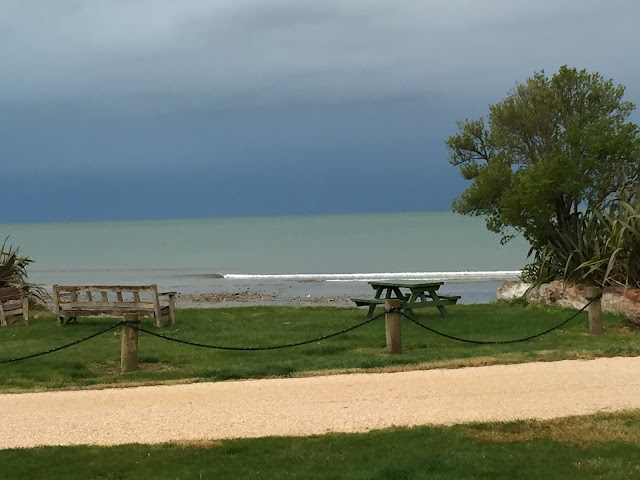