The top of the North Island feels wilder the farther north you travel, reminding me of a kiwi dinner companion on Great Barrier Island who pondered my query about the North Island's west coast and responded: It's...feral. 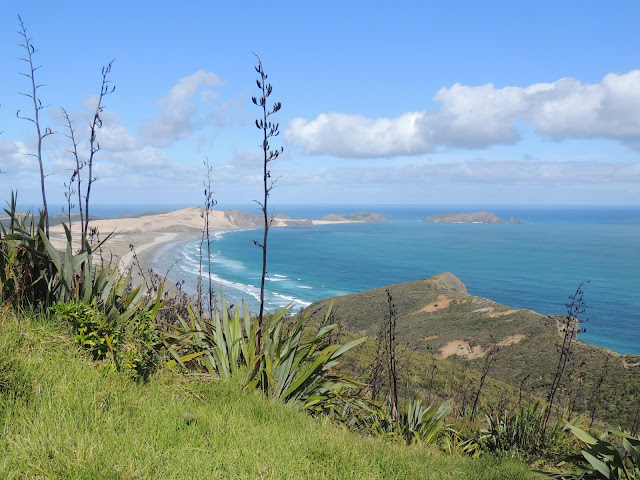 Yesterday we briefly looked at the history of this place. Via NZ Department of Conservation...
For Māori, Cape Reinga is the most spiritually significant place in New Zealand. An ancient pohutukawa tree and a lonely lighthouse mark this special place.  It is here that after death, all Māori spirits travel up the coast and over the wind-swept vista to the pohutukawa tree on the headland of Te Rerenga Wairua. 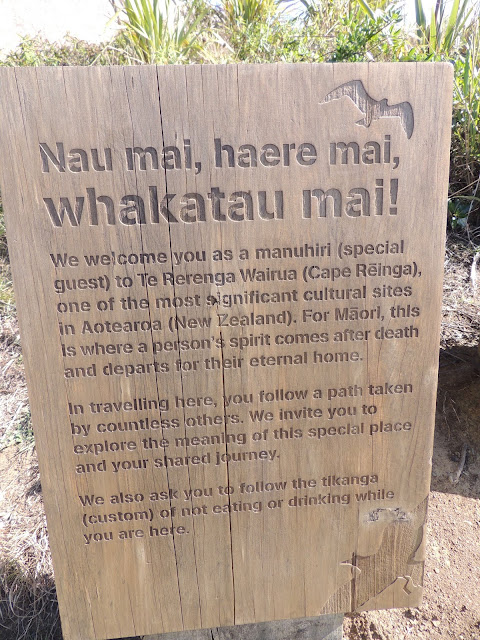 Less poetic if unimaginably cool is that right here you can see the collision of two great oceans, to the west the Tasman Sea and to the east the Pacific Ocean.

Cape Reinga is generally considered the separation marker between the Tasman Sea to the west and the Pacific Ocean to the east. From the lighthouse it is possible to watch the tidal race, as the two seas clash to create unsettled waters just off the coast. The Māori refer to this as the meeting of Te Moana-a-Rehua, 'the sea of Rehua' with Te Tai-o-Whitirea, 'the sea of Whitirea', Rehua and Whitirea being a male and a female respectively.[3] 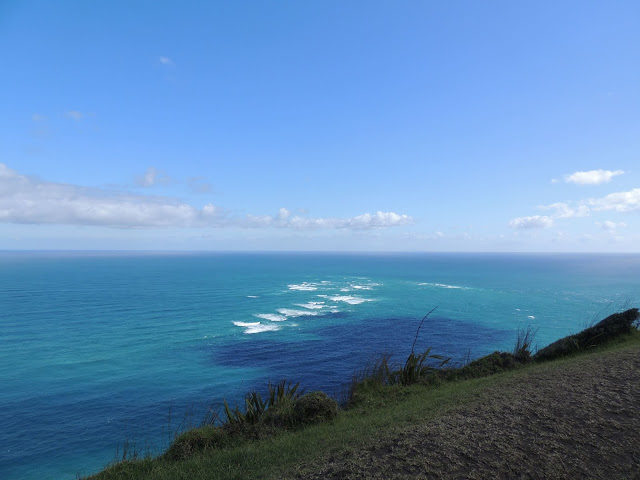 It's a splendid walk to the lighthouse. If you're a lighthouse geek, there's more here...

Completed in 1941, the lighthouse at Cape Reinga was the last watched lighthouse to be built in New Zealand. The new light had little use for the first few years owing to wartime blackout restrictions. Threat of an invasion was a very real fear for the keepers at Cape Reinga. In 1918, during World War One, the German raider Wolf was seen anchored in nearby Twilight Bay. Only months before, the passenger ship Wimmem was sunk by a mine 29 kilometres off the cape, killing 26 people. 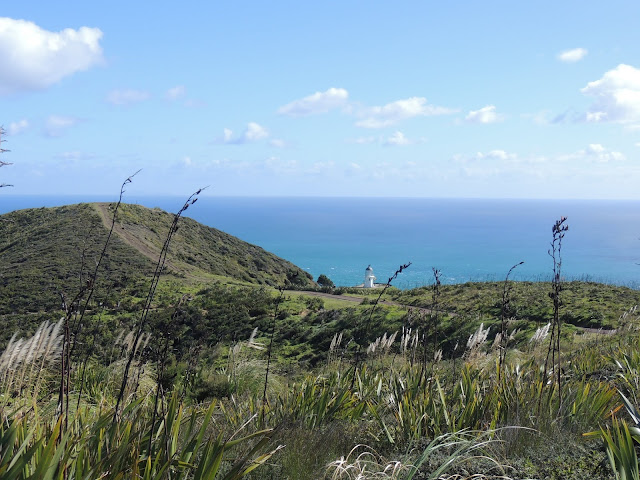 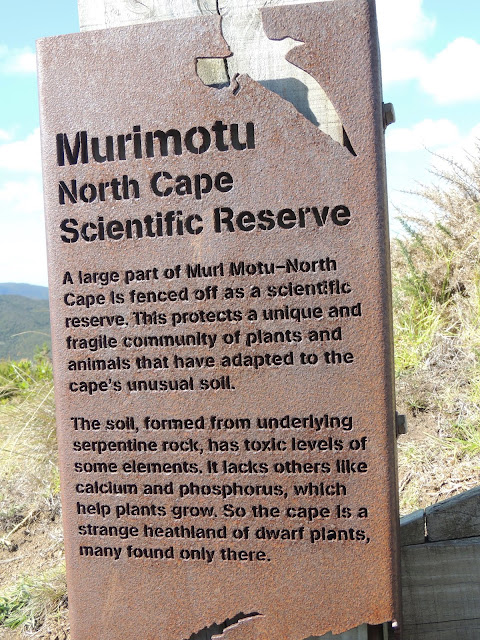 Tasman/Pacific divide or a trick of the light? 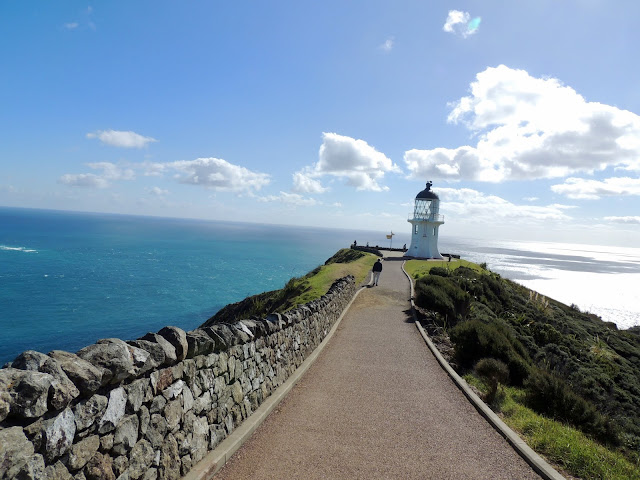 They descend into the underworld (reinga) by sliding down a root into the sea below. The spirits then travel underwater to the Three Kings Islands where they climb out onto Ohaua, the highest point of the islands and bid their last farewell before returning to the land of their ancestors, Hawaiiki-A-Nui. 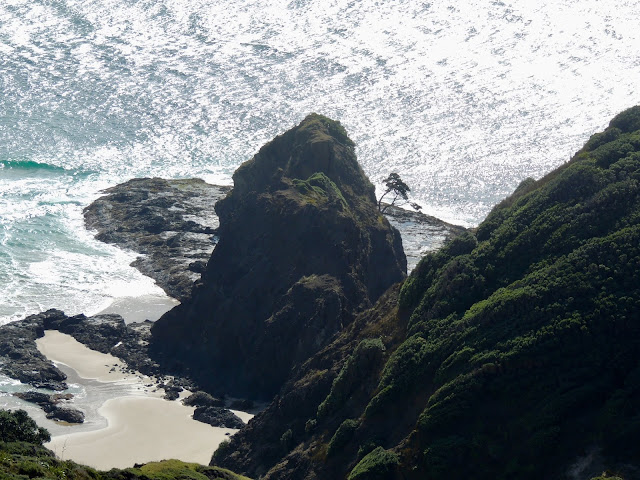 Bluff is at or near the southernmost tip of NZ, on the South Island. It's known for its delectable oysters, and I can attest to that. 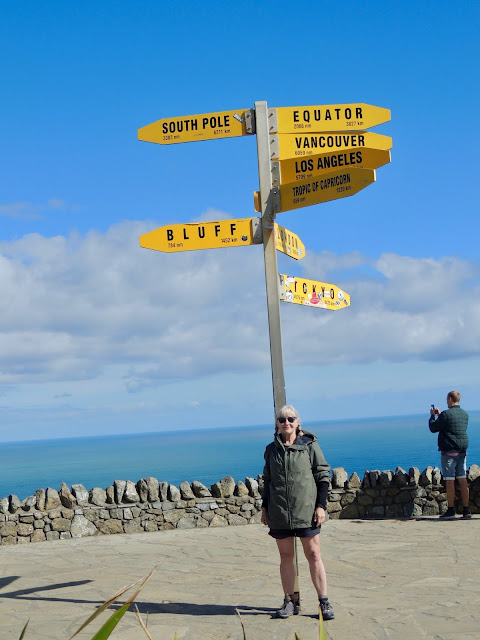 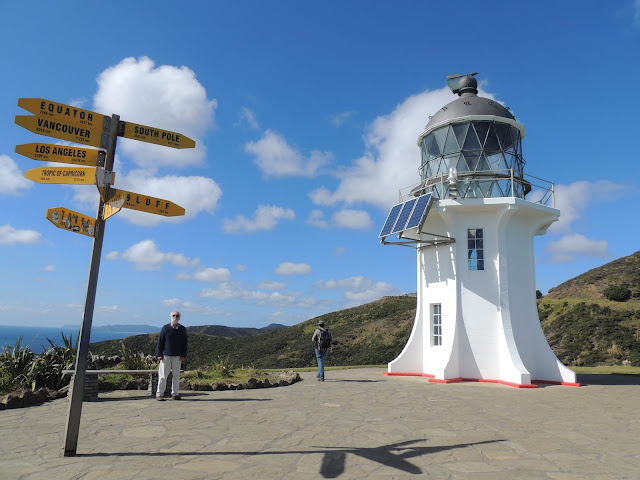 A peek via telephoto at Spirits Bay. 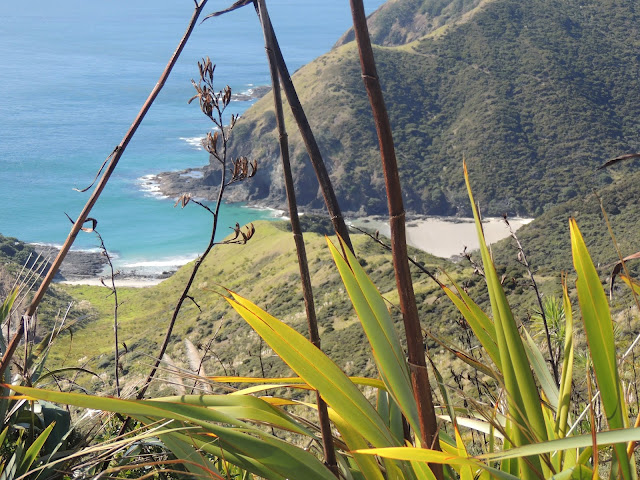 And the story behind it...

The Te Paki sand dunes are just a few kilometers off the main road south of the lighthouse. When you approach them from the winding gravel track they're so otherworldly it's as if you've come upon a stage set. 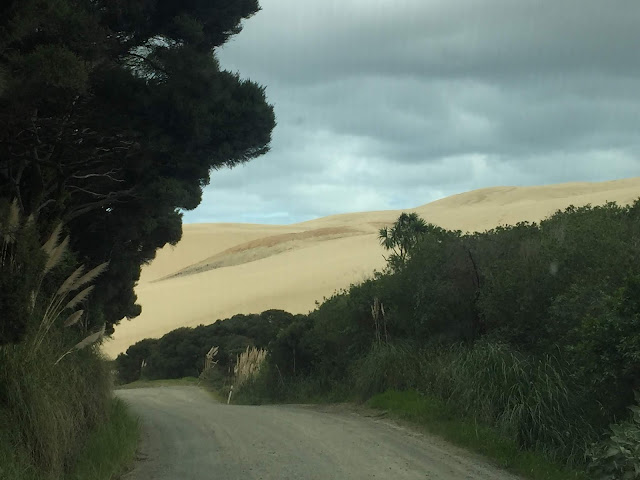 From the main road they loom in impossible-to-grasp hugeness. 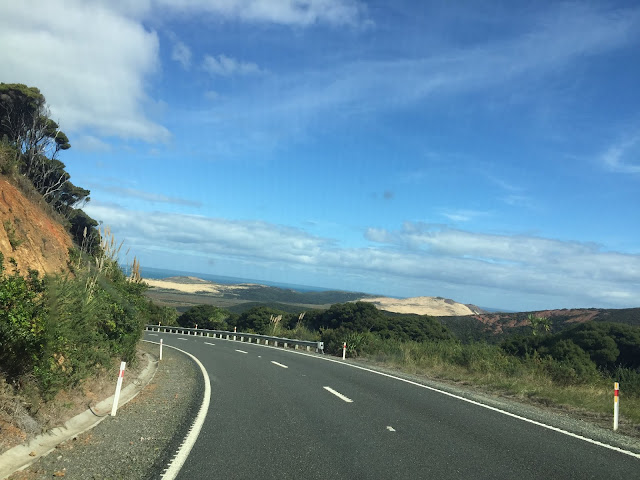 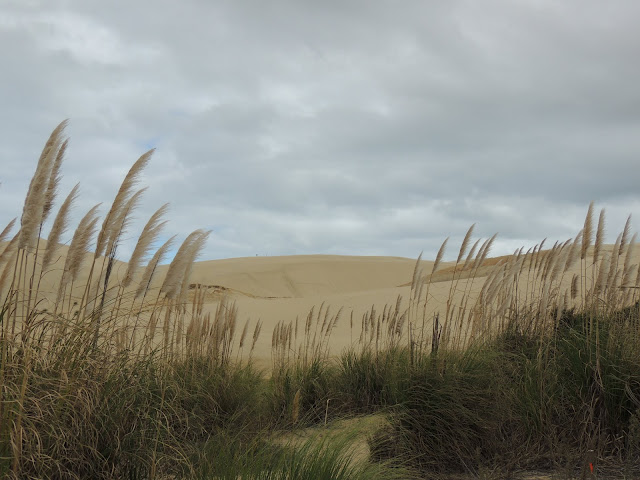 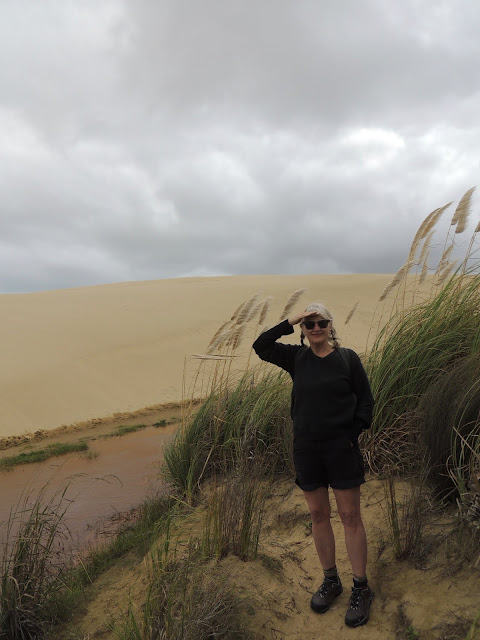 See the wee people at right climbing that dune with their sand boards? 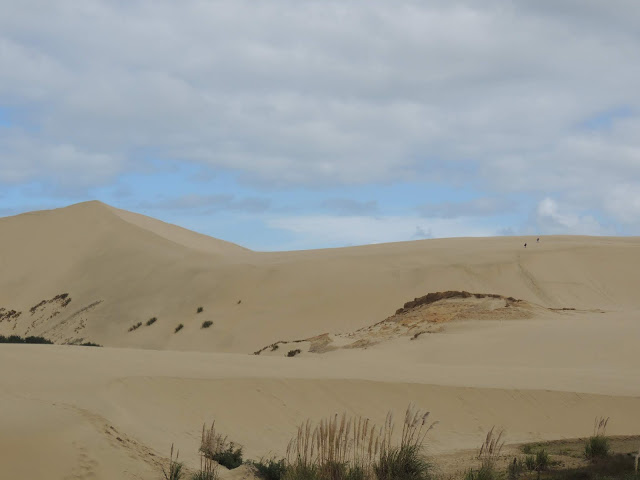 We watched a couple of them flying down the sand. Looks like fun--want to try it? 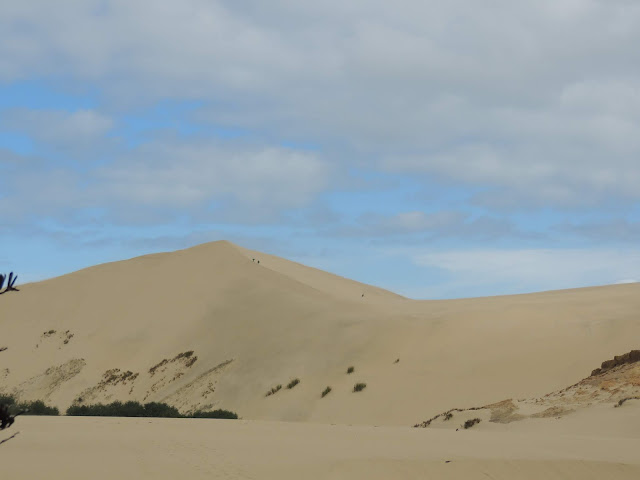 This sign made me chuckle. These guys are doing a thriving business renting sand boards, but clearly the "Sand surfing can be dangerous" green tape has been carefully applied...again and again. Note "you must lie on your stomach." I couldn't imagine my contacts after doing that. 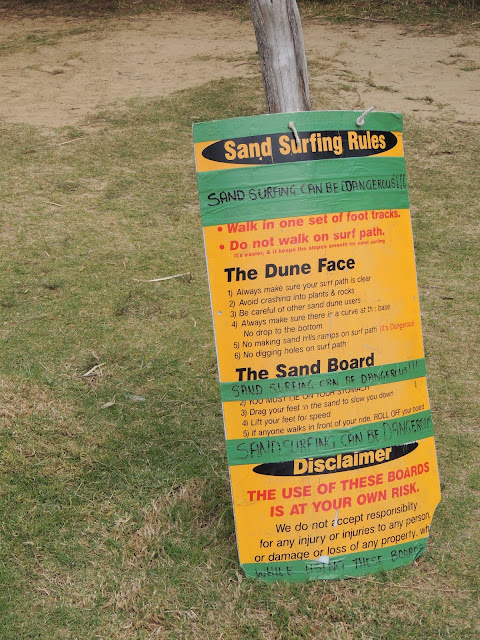 The other day, out of the blue, a man approached me in a campground and said "You look like an intrepid adventurer." It was perhaps the loveliest compliment I've ever received. What would he think of my failure to sand surf?