According to Outside Magazine, this photo is real--read more by clicking here. Probably most of you have seen it already, but it still has the power to shock. 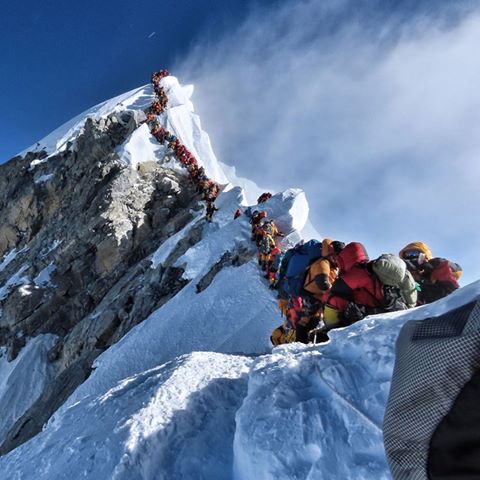 One of the real treasures spending time in NZ off season is its relative emptiness--no lines, no hiking back-ups like the photo above. The downside is that some restuarants are closed for the season, but that we can easily live with.

Today we set out from our campground to find the Tutukaka Lighthouse. 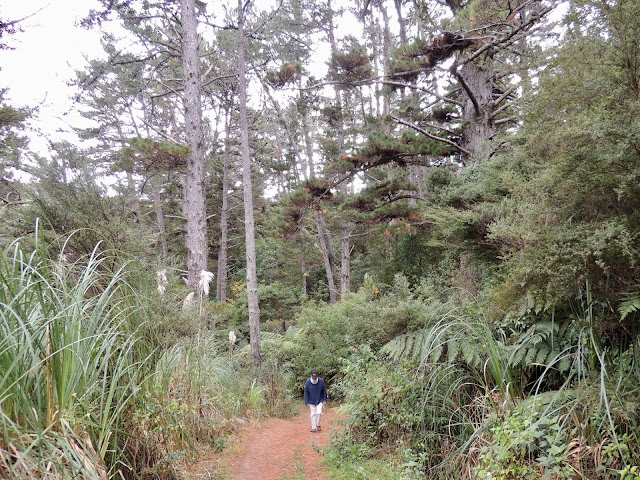 We departed at 1 pm based on the tide tables and the recommendation of our camp host. There's Tutukaka harbor below. 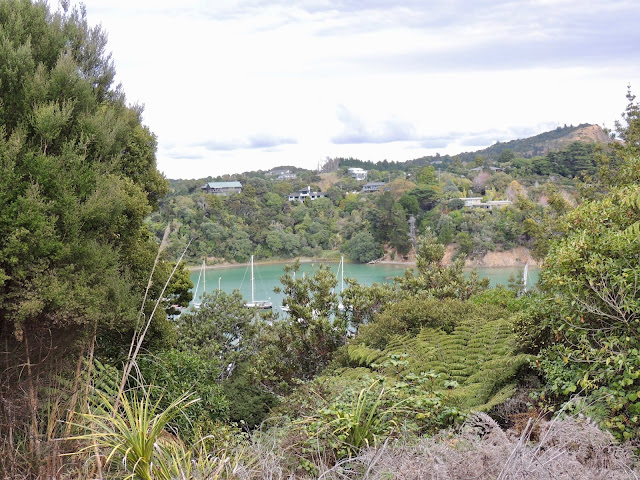 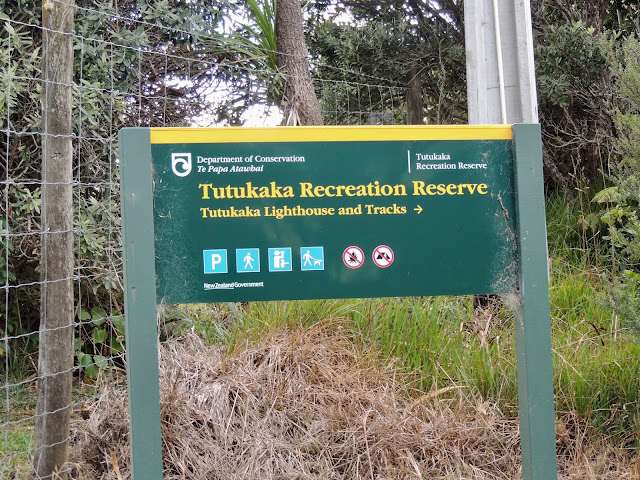 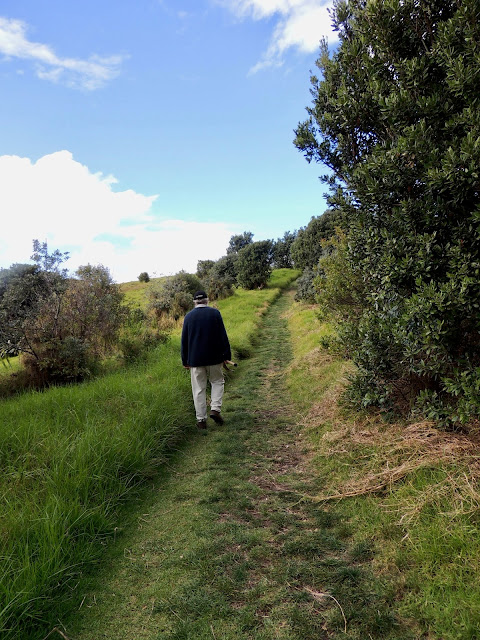 Seductive bays on both sides of the peninsula. 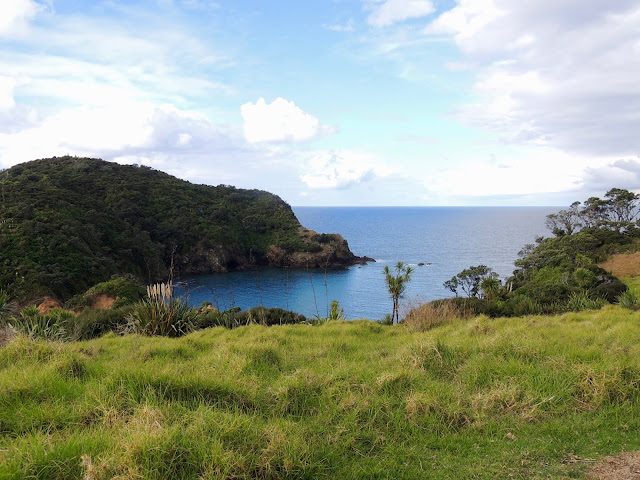 Then we came to the stairs, gravity feeding us down, though Art would count them on the return and report later. 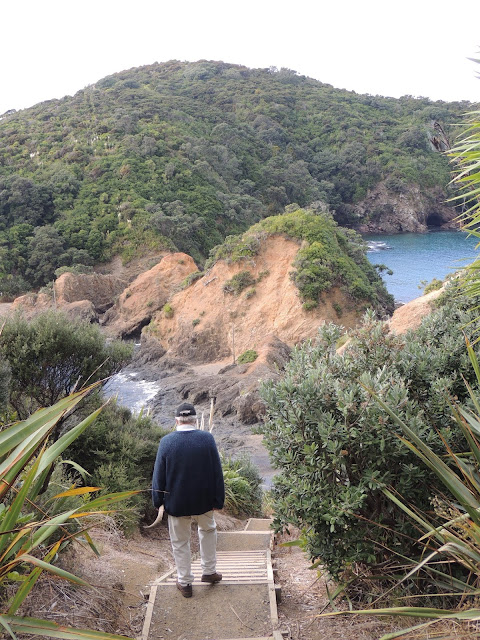 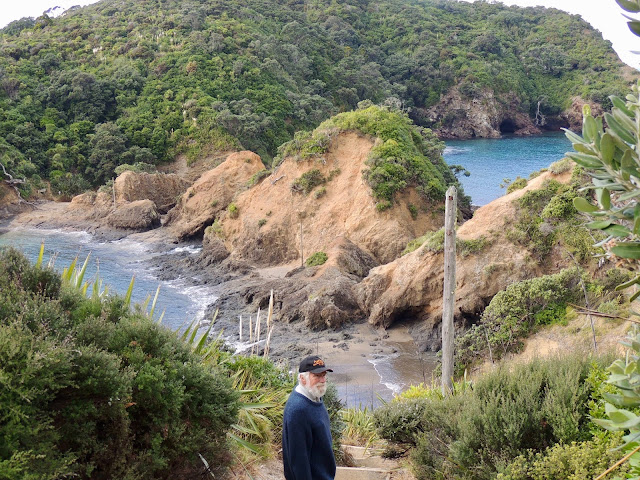 Here's where we thought the tidal challenge was, and it is, though it turned out to be the first of two. See the waves coming at each other over the sand? 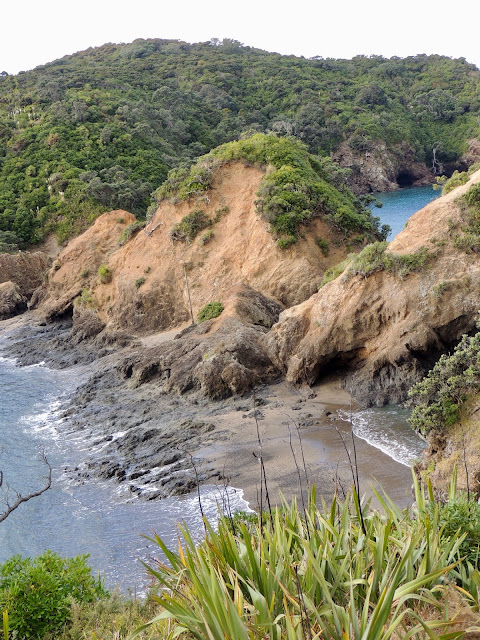 About every third wave they would meet. I'm going for it! 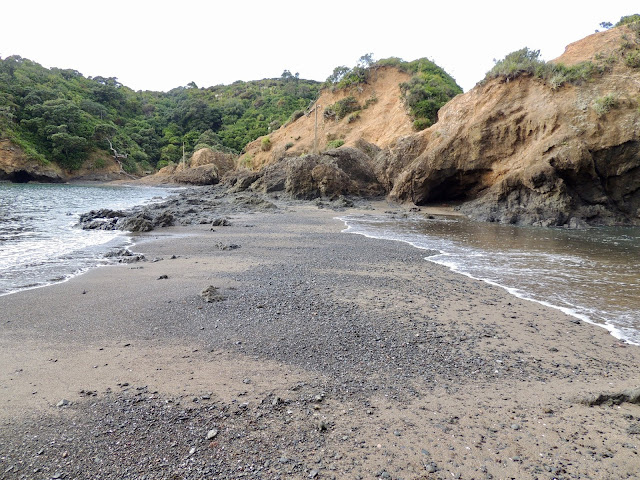 Once we got to the other side we were off a proper path and onto what looks like lava. 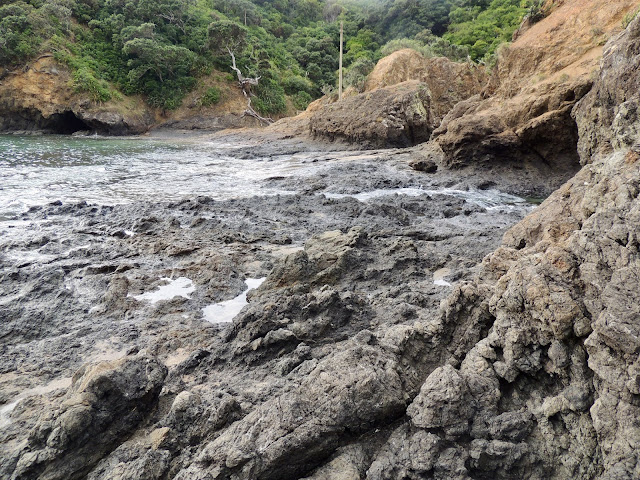 And here was the rub. Somehow we were too early in the low tide process to cross this without a) wet feet and b) possibly wrecking our ankles since the lava continued underwater. We stood here for about 15 minutes trying to work it out. 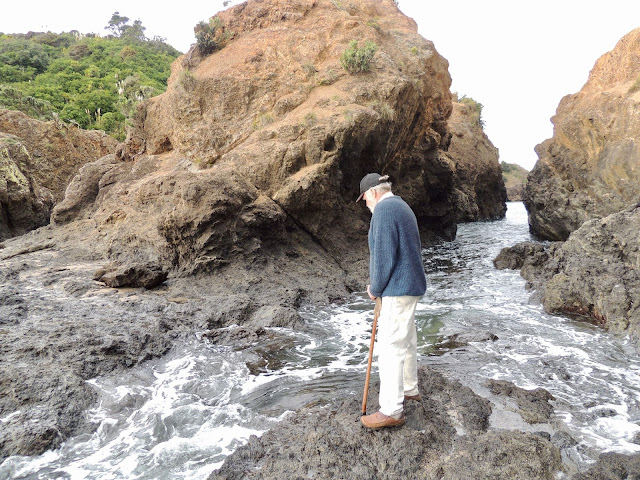 Coming the other way we saw this group, each of whom lunged over the opening and made it to the other side. (The dog was most graceful.) Impressive. 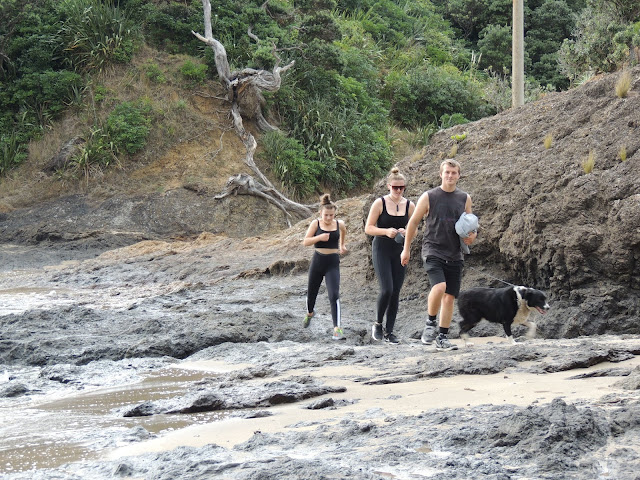 I'll be honest: the intrepid explorers turned back. It was time to walk up 189 stairs and remember that it's the journey, not the destination. 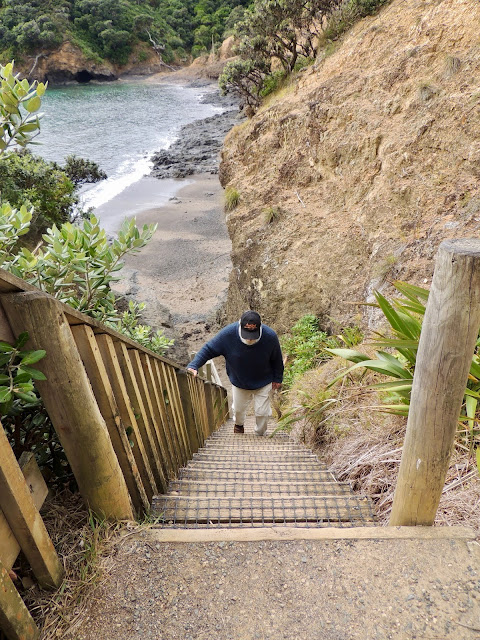 Sitting at the top of that segment, I zoomed in on the lighthouse. Nothing to write home about. 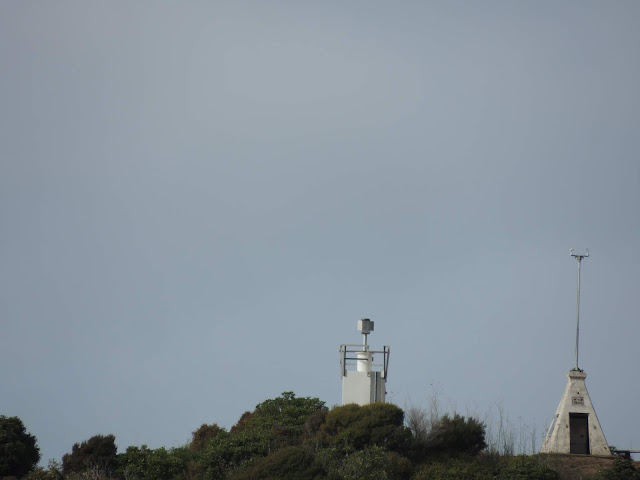 But the views were superb 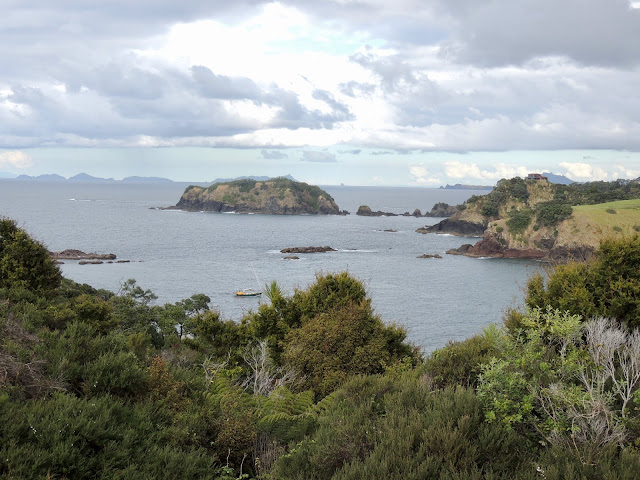 On the return, we ran into a couple (I think this was their car) and he asked if we'd made it across. I told him our sorry story and he declared his girlfriend was going to carry him on her shoulders because he didn't want to get his new trainers wet. 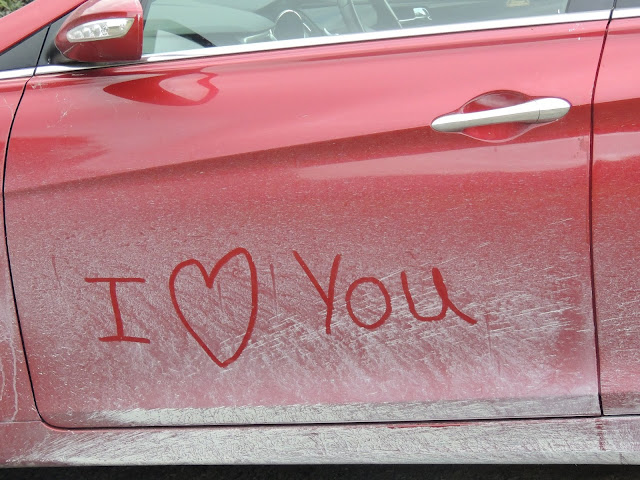 The walk back to camp took us past Schnappa Rock, our restaurant from the other day. 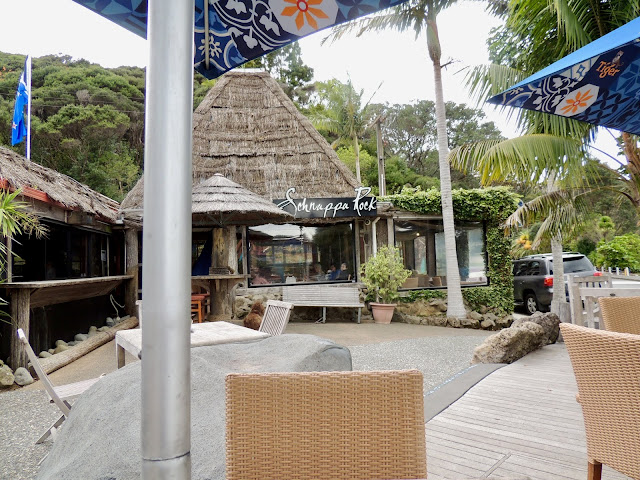 Flat whites for this crew... 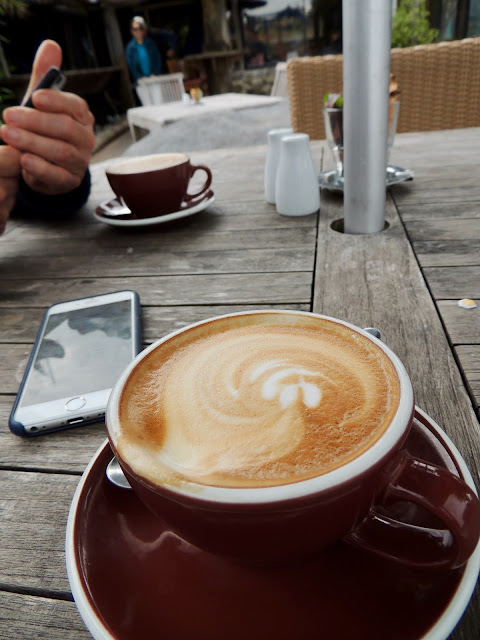