At Bland Bay there were exactly two other caravans, housing people we've come to think of as those ever-friendly Kiwis. These two are full-timing it in their caravan (much larger than ours) and yesterday they went fishing with some unusual gear. 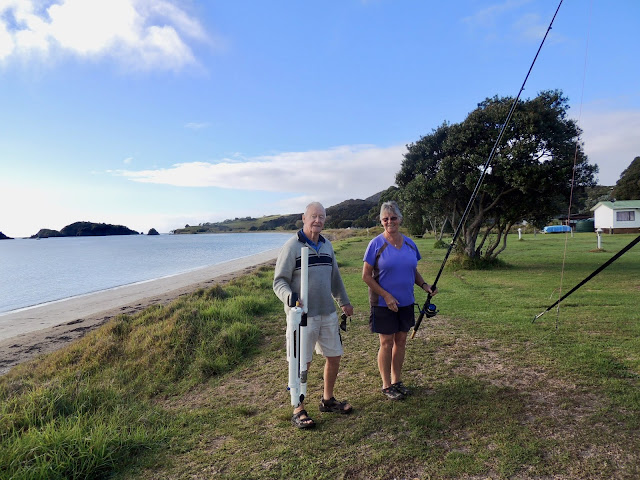 Since his stroke, the man can't cast from shore any more. But no worries, mate. He and his wife have a Bait Cannon, "the revolutionary air-powered bait launcher."  Click here for Bait Cannon's website, with claims of launching your bait up to 300 meters (900 feet) from shore.

Here he's using the foot compressor to pump the thing up. (When I first saw him doing this from our caravan I thought it was a post-stroke exercise...which it may also be.) 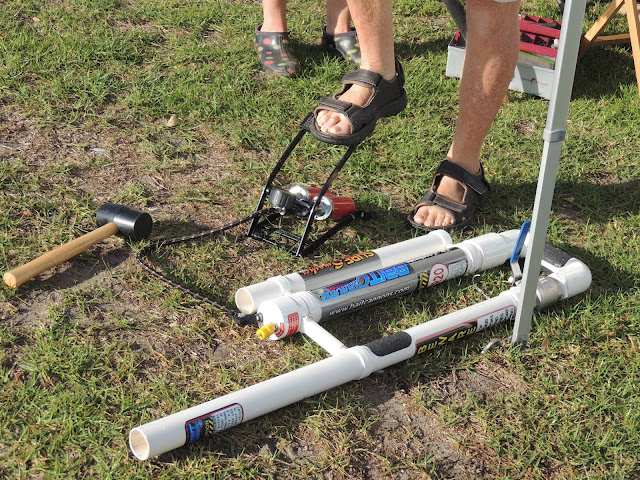 I'm not sure what the rubber hammer is used for (you can probably figure it out by watching the vid at the website), but the woman is holding the baited pole and powee! looks like I caught the Bait Cannon just as it shot forth into Bland Bay. 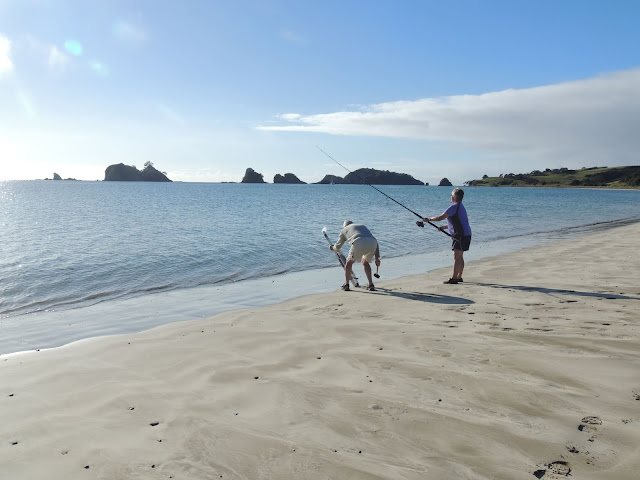 They didn't have any luck on the first try, but just as the tide turned last night they shot it off again. An hour later, I heard a gentle knock on the caravan window. Since I'd been documenting all this fishing, someone wanted to show off the gorgeous snapper they snagged. Nicely done! 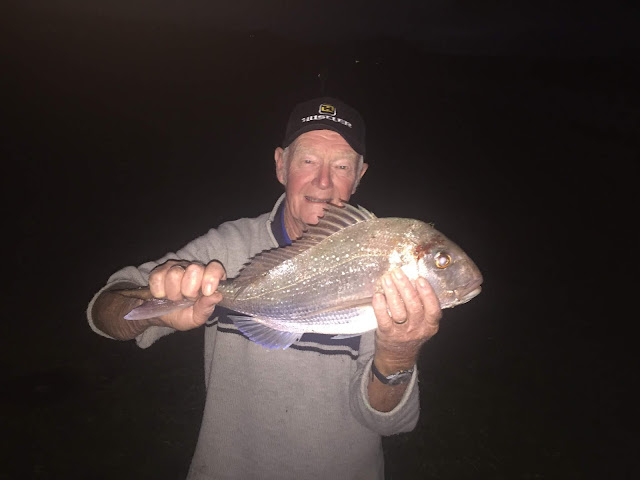 Today our other fellow campers (who went to town 1.5 hours away two days ago and asked if we needed anything from the grocery--yes please--those Kiwis!) brought our their fishing gear. Are there no lengths to which these people will not go to catch fish?

I'm not sure what this one is called, but as you can see below it's a small propeller-driven unit with flag that spools out lot of line (2 km worth!) onto which he attaches 25 baited hooks that drop down from the main line.

That's the legal limit, he responded. (Not making a comment here about playing a fair game.) 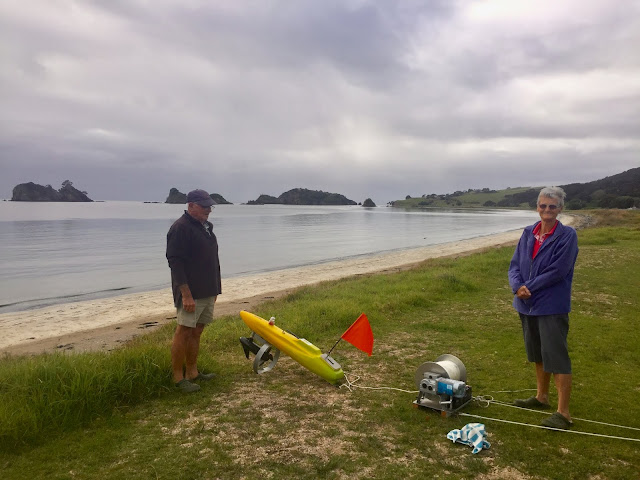 While she monitors the unspooling, he gets the thing going (see it chugging away out there?) and  attaches the bait lines. 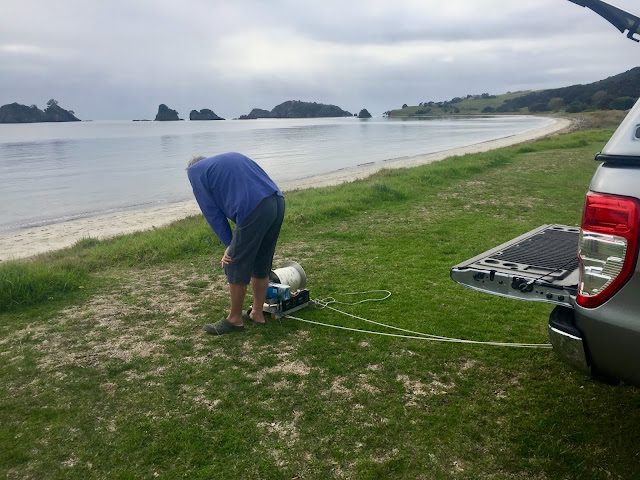 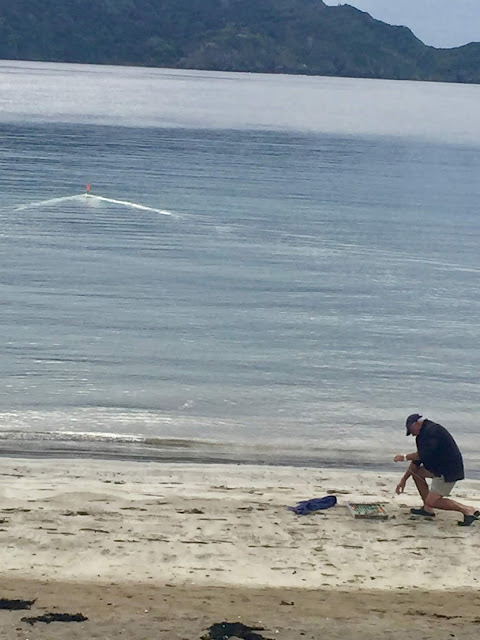 (We walked the beach for an hour and by the time we returned they were reeling it in.) 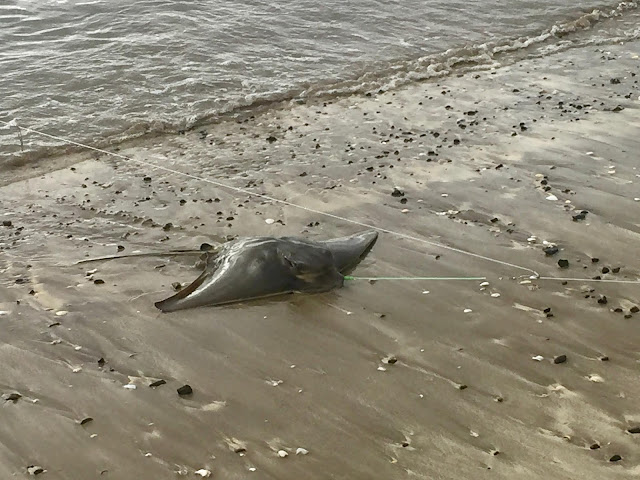 The gulls are nobody's fools ("cheeky," said the guy). While he unhooks the ray they make a run for the removed bait lines to snatch the octopus tidbits. 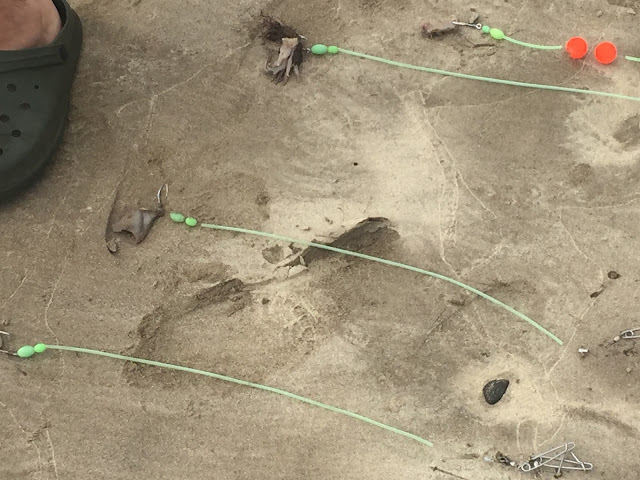 Second catch of the day: another ray. "Looks like we're in ray alley," he said. The rays appear no worse for having taken a hook. I actually heard one grunt, as if with thanks, when he removed it. 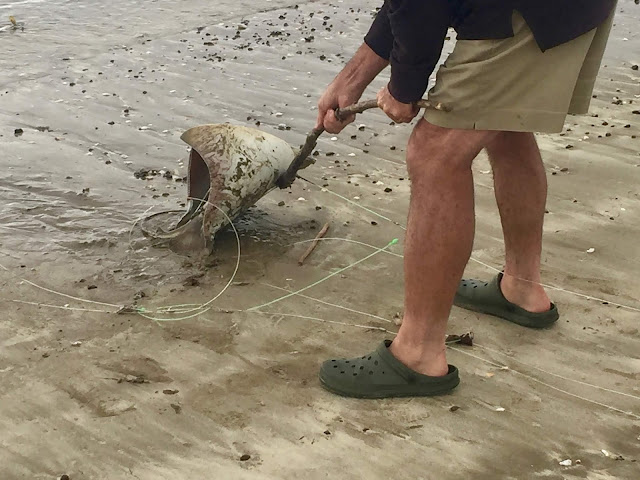 Third catch: starfish
That was the total haul off the propeller bait line. Unperturbed, he said they'd try again later in the day, clearly a person like the fishers we know who would rather fish and catch nothing than do just about anything else. 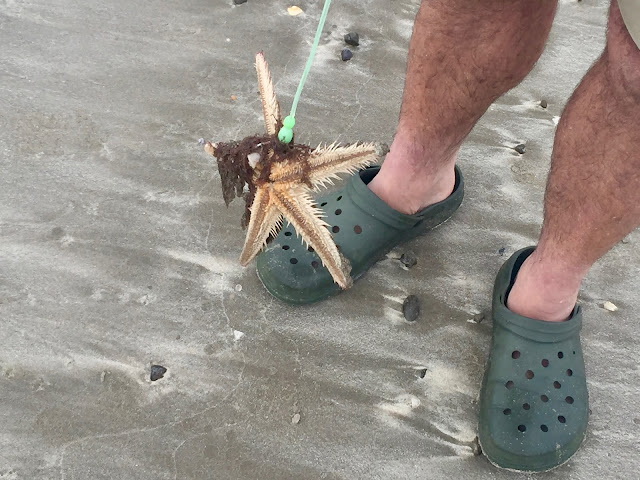 We were having so much fun we almost forgot we were leaving, which we did after packing some cheese, apple, nuts, and veggies for the road to a DOC (Department of Conservation) campground a couple of hours down the road.  As I write there's a one-legged duck quacking outside our window in a sympathy effort that seems oddly well-rehearsed... 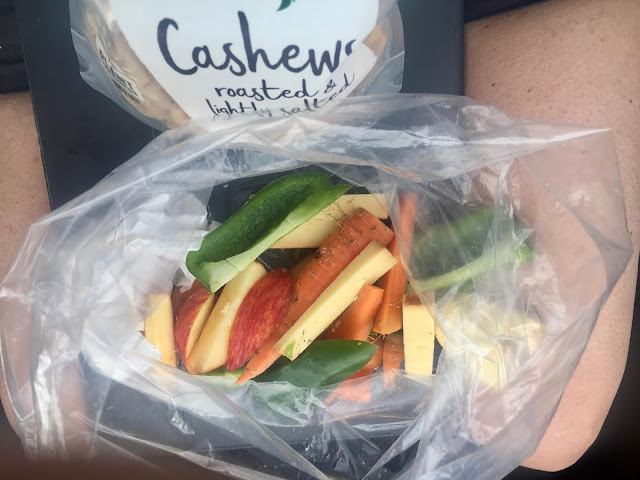