Two years ago Camp Glenorchy was a construction site (and according to this piece, that was two years after some acrimonious local debate). 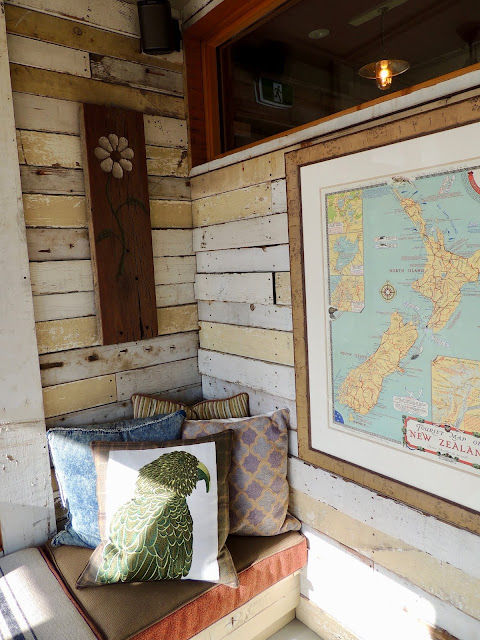 On this visit, we're staying here and it is unlike any campground in NZ or perhaps the world. Camp Glenorchy is part of a larger concept called The Headwaters and behind it are Seattle philanthropists Paul and Debbi Brainerd. Click here for more.

Highfliers in the technology industry in the States, they discovered Glenorchy on holiday over a decade ago and made the dramatic decision to semi-retire there.

One day, Debbie's interest was sparked by a "for sale" notice at the under-used and neglected Glenorchy camping ground site.

After some research, she discovered the three previous owners of the land had gone bankrupt, but she pushed on with the concept of a sustainable accommodation complex. She and Paul say the project called to them and it felt like a way to give back to their beloved community. 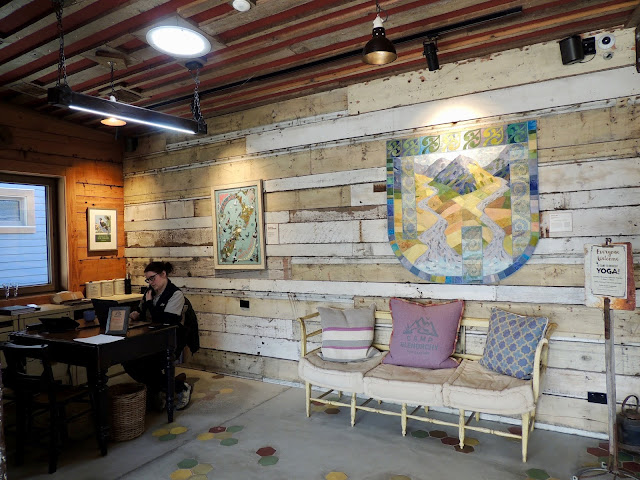 Here's more on Brainerd, who sold Aldus (as in Pagemaker) to Adobe for $525 million in the mid-90s, and his philanthropy. 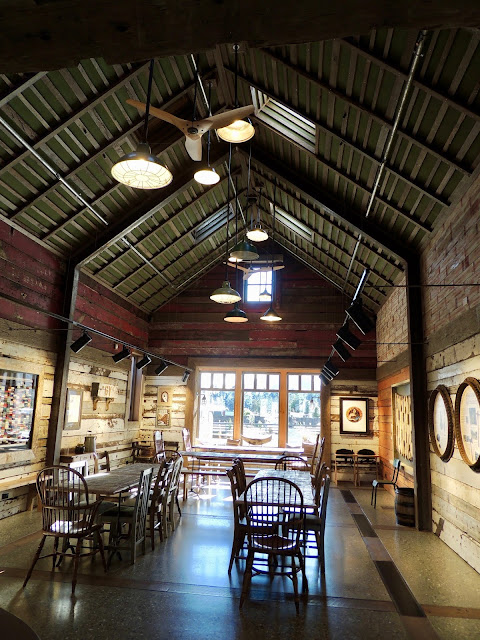 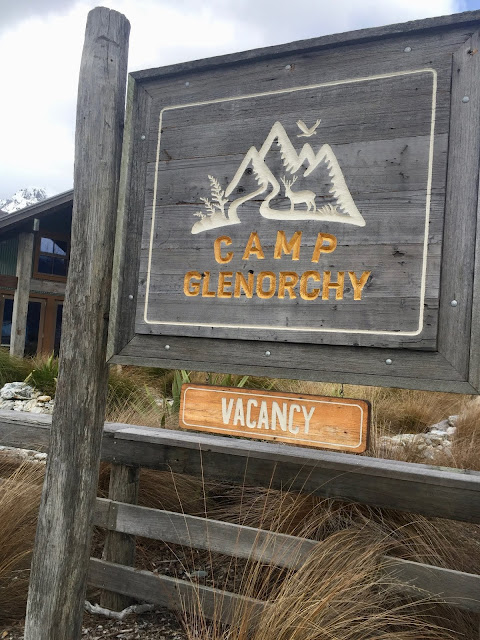 From Camp Glenorchy's website:
The Headwaters is the umbrella name for an array of environmentally sustainable accommodation and retail services in Glenorchy, New Zealand.

All profits from The Headwaters benefit the Glenorchy Community Trust, directed by local community members. The mission and vision of the community trust is to increase the vibrancy and resilience of the community of Glenorchy, a rural village nestled between the Humboldt and Richardson Mountains at the head of Lake Wakatipu. 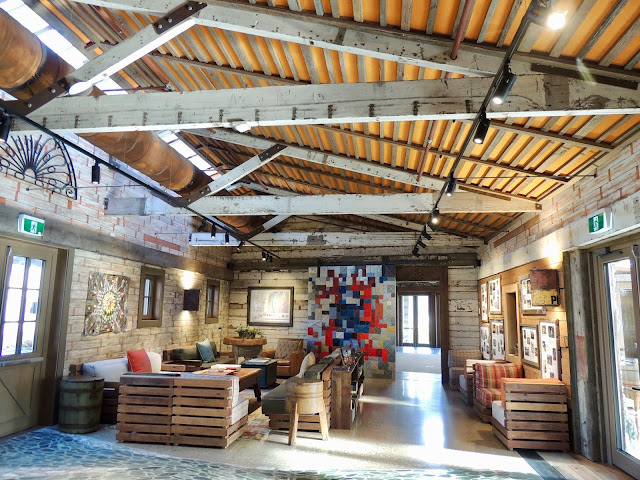 Worth noting from the outset: we can see how and why some people in this tiny community responded the way they did. The idea of rich USians moving in and building this complex makes even me, a visitor, a bit uncomfortable. But with that said, I'm now going to keep showing you how impressive the outcome is. 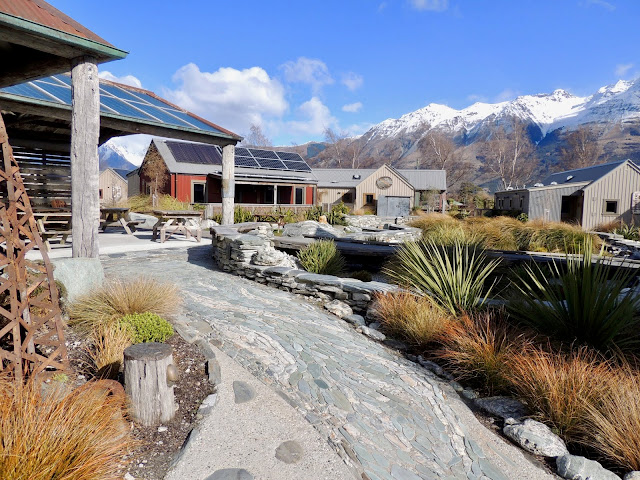 We've written here about the Kiwi campground tradition of a communal cooking space. This one I'd like to take home with me (or just live in permanently). 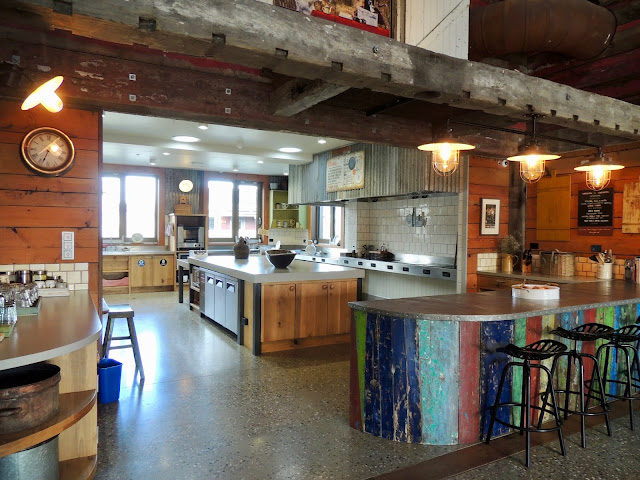 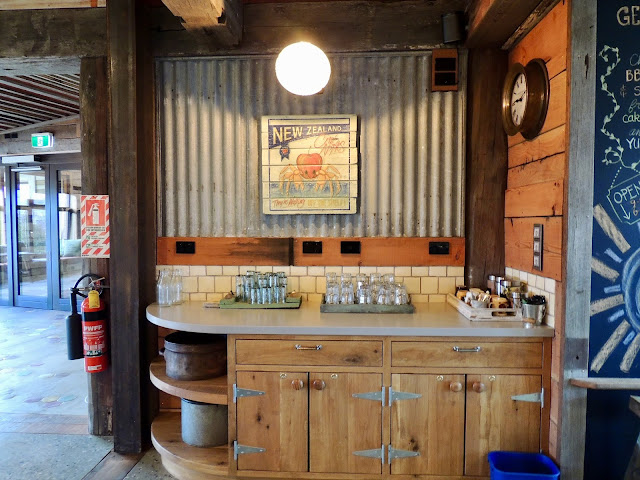 Making hard-boiled eggs on the kitchen's induction range--just set the temp and wherever you put down the pot it cooks underneath (magic!). 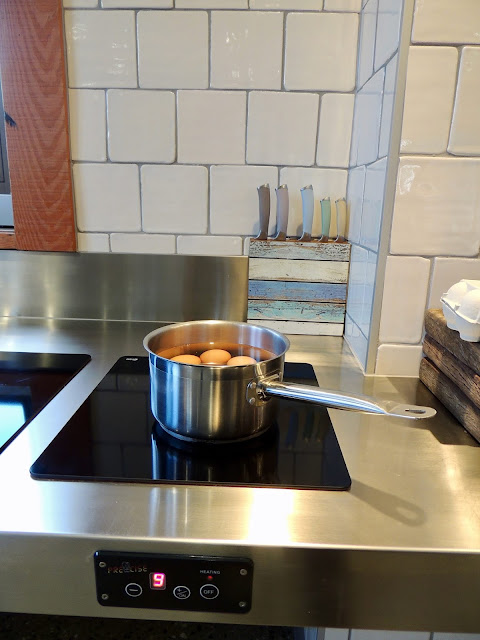 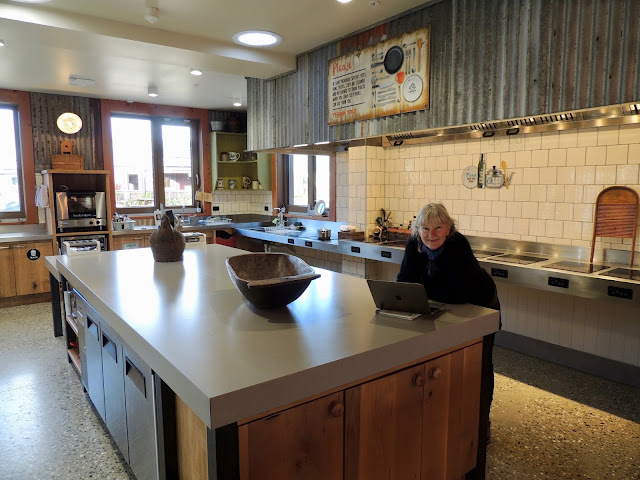 Interestingly, a Pacific Northwest garden artist whose blog I follow was commissioned to make the gorgeous mosaic floors, which depict the two significant rivers of the region--the Dart and the Rees. Here's Jeffrey Bale's fascinating blog explicating how he approached this massive project. 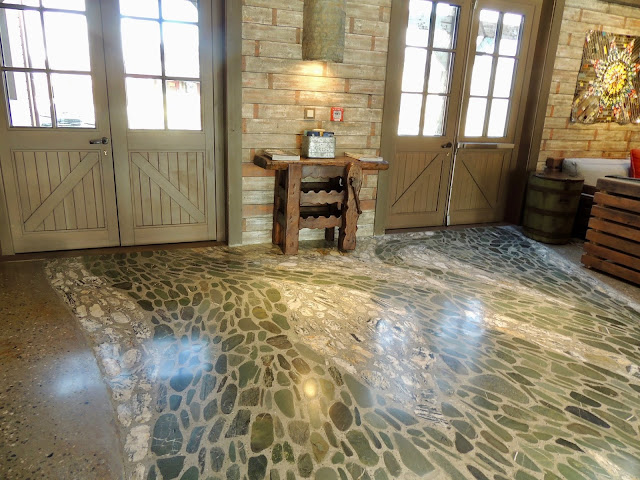 You can explore more about how much energy they're saving by clicking here. Hundreds of solar panels dots the roofs. They don't get everything right, but mostly yes. 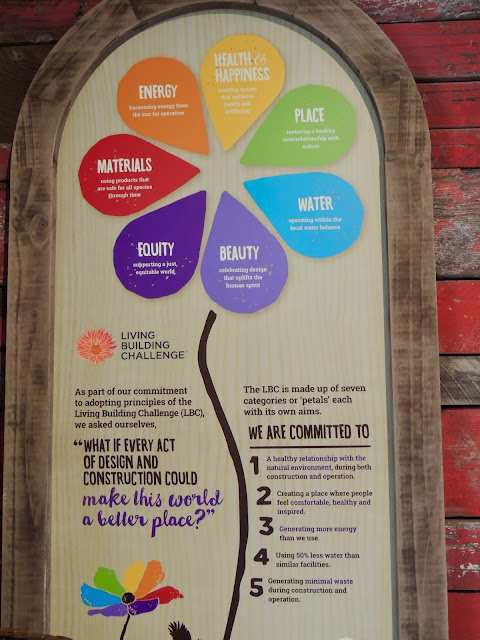 Flush toilets use an extreme amount of water (and usually fresh water here and in the US). These composting toilets in the very private bathrooms smell as sweet as hay and save 300,000 gallons of water annually. 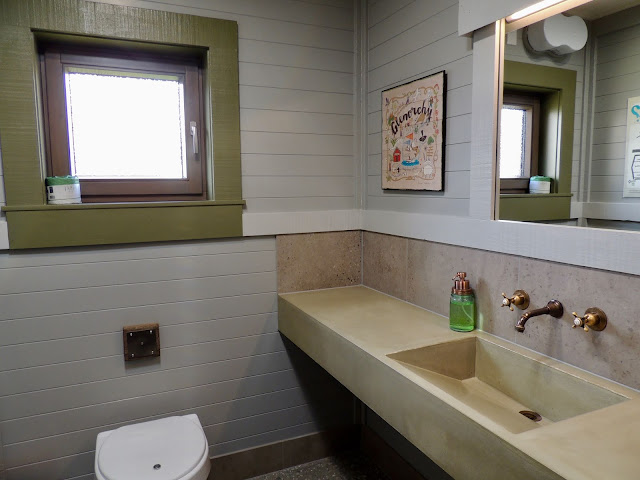 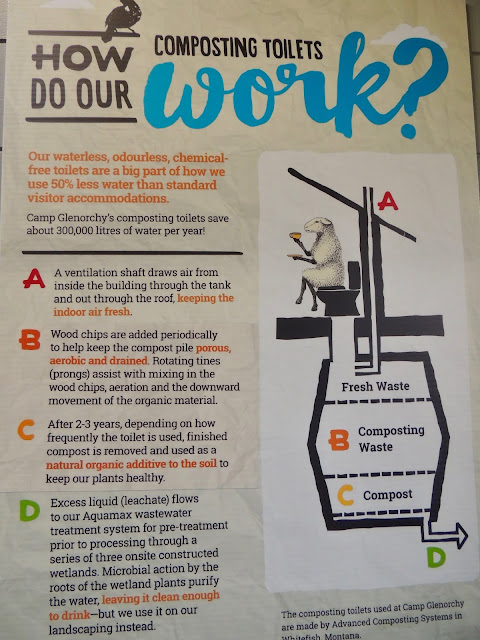 We're the only people camping here (hooray for winter). These parking spaces are pretty minimal and there are just seven of them. Next door, though, is Mrs Wooly's campground (closed for winter), which has a different rate structure and more open feel. 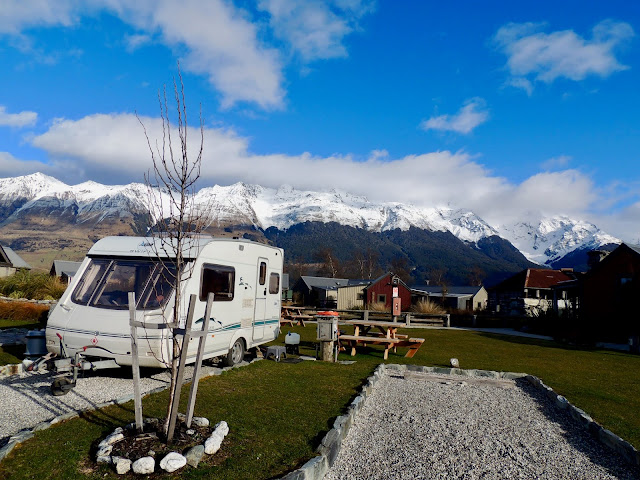 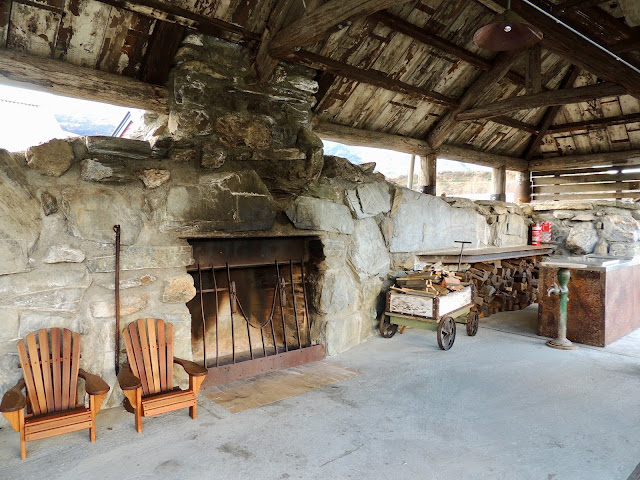 Speaking of rates, we're paying an off-season rate of NZ$65 per night, or US$42. Other than two DOC campgrounds quite a distance away, this is the only place near Glenorchy to camp. The facilities are beyond impressive and we're delighted to be parked here to explore this stunning part of NZ. 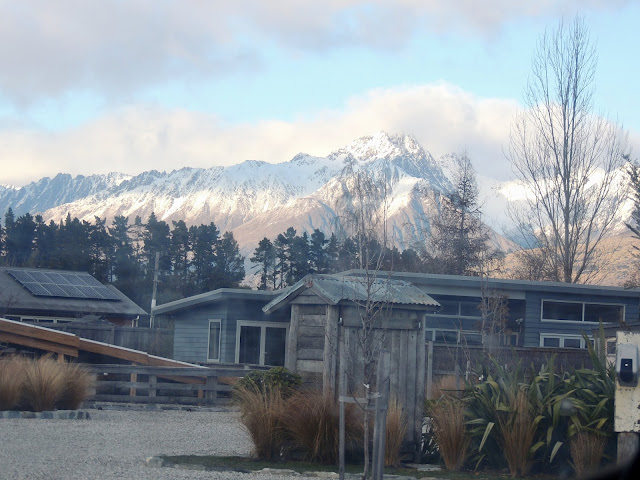