(click here to view in browser)
Good bright sunny morning, chefs. It's Saturday, which weirdly now feels drained of most meaning, but today we're bringing you a variety of food projects to stimulate your thought processes and taste buds.

Longtime friend Camille from Boise said it simply:  Three rises for these Swedish Cardamom Buns. Tasty, but flat. We tried. 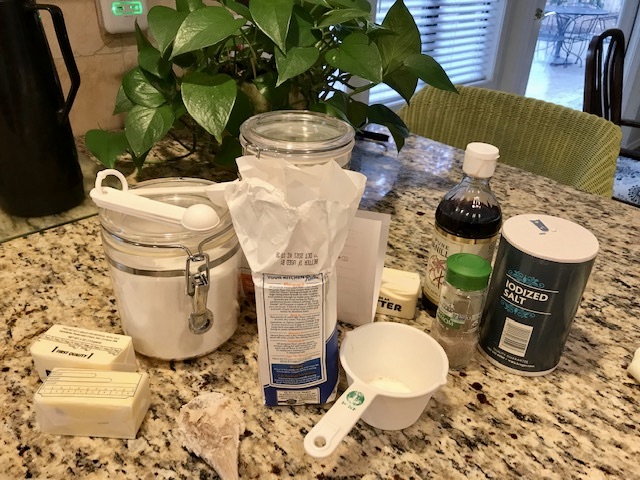 We grew up eating cardamom bread, which we called Gramma’s coffee cake. Less sweet than these rolls. 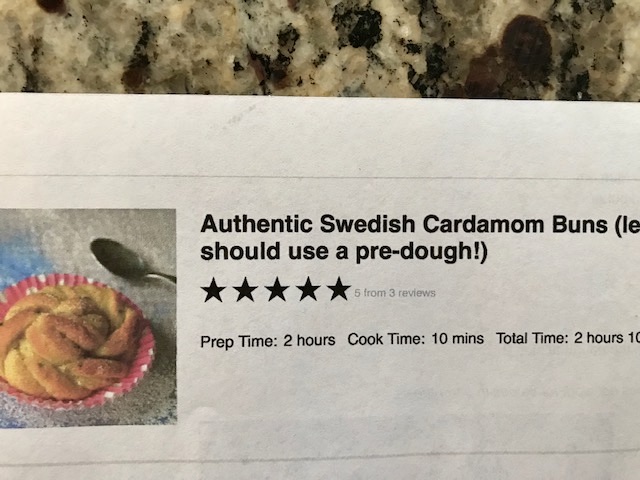 Marta and I thought these were good but we like Gramma’s recipe better. 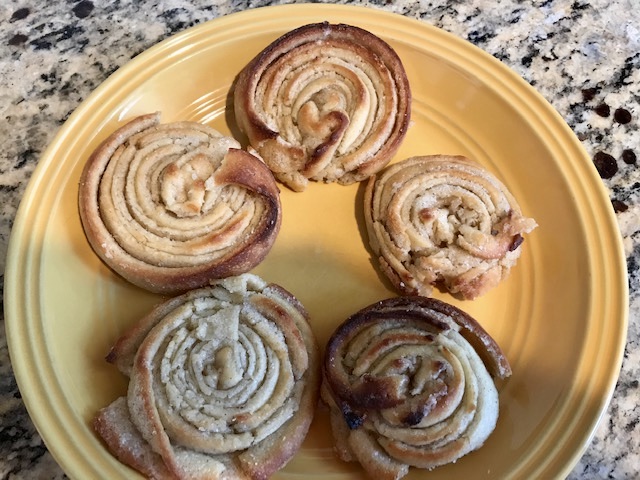 (A for effort, Camille, and they look tasty to me.) 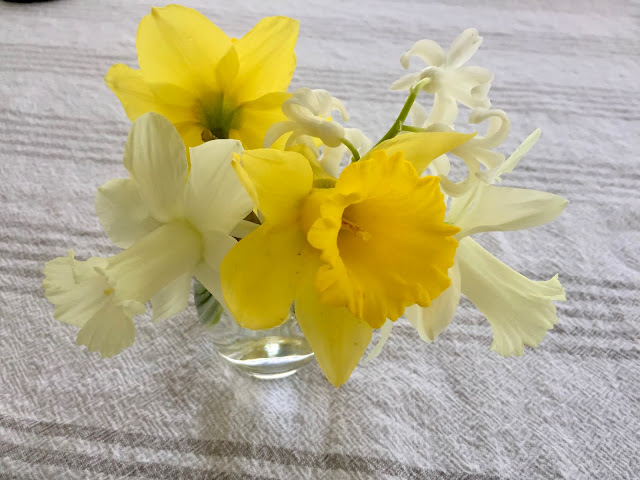 I talked to another longtime friend, Gwen, about trying to keep the spark alive for daily food prep.

Gwen followed up to say: I haven’t completely thrown in the dinner towel. Tonight, shrimp with yogurt, leeks, olive oil, and zucchini, over orzo, with tomatoes in rosemary and olive oil. I have not been one to measure, but if I remember correctly I browned the leeks in lots of olive oil (a little more than you think is enough), added the zucchini for a few minutes, and then the shrimp, white wine, dill, salt/pepper, and yogurt. 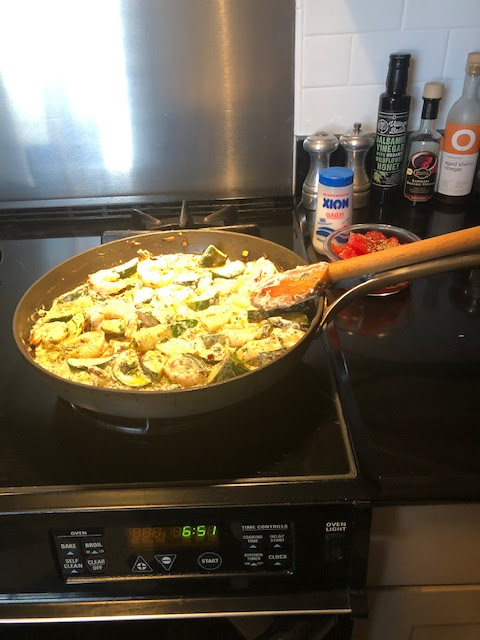 
Cousin David made a picture of his sauté pan as he was sauteing oil, Korean chili, turmeric, and za’atar (a lemony middle Eastern spice). He says: No drones were used, but it looks like it...? 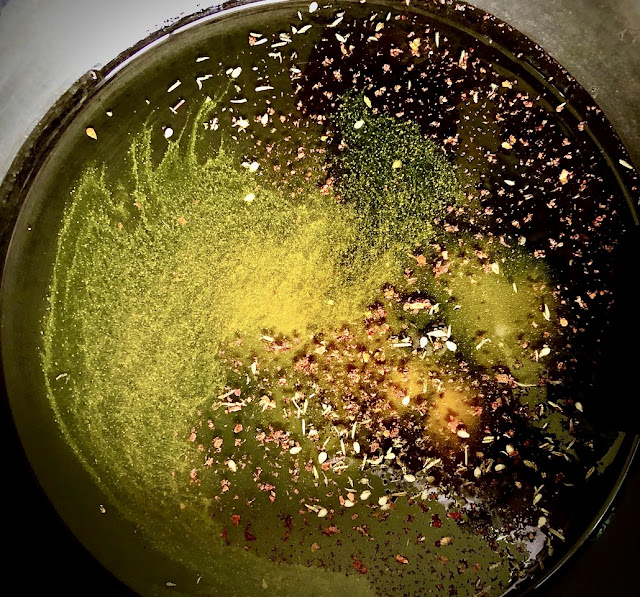 Here at H2 central, we're relishing local duck eggs. With shitaake when we have them (did I already run this picture? I'm losing the thread). 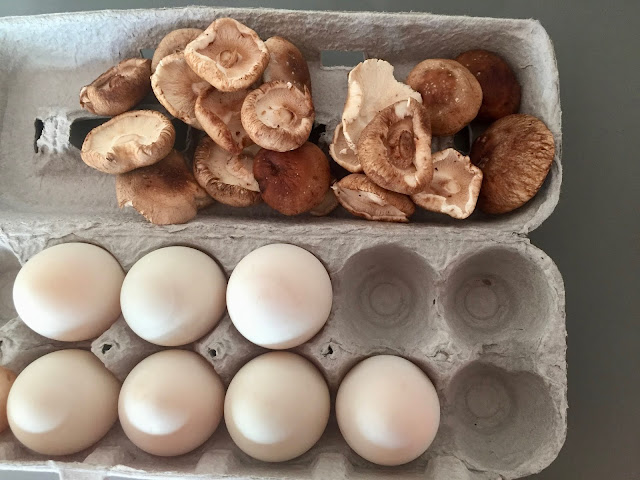 With chives growing wild for breakfast 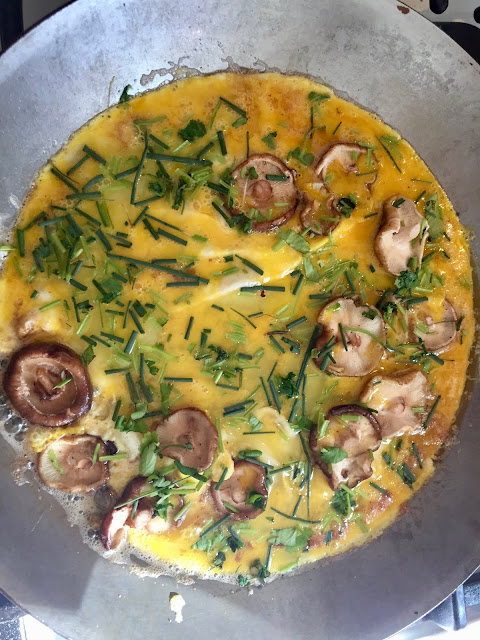 Mock turtle soup
Carole in Mexico City forwarded a recipe via mutual Chicago friend Barb: "Found in my mother’s cookbook while looking for the German pickled cucumber recipe. The recipe below, probably published in the Cincinnati Enquirer or Times-Star in the late 1940s, is attributed to my grandmother, 'Mrs. Charles Krueck.' I recall her making this once when I was probably 7 or 8, and adamantly refusing to eat it." 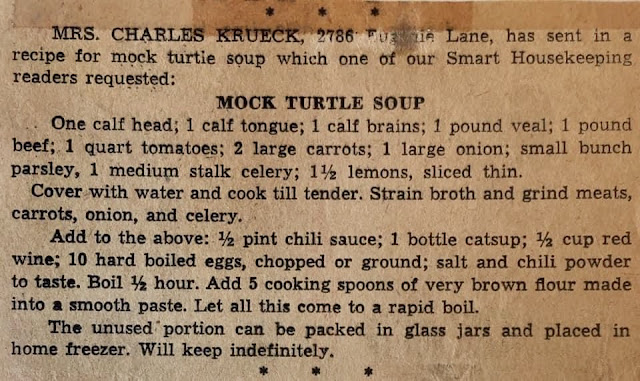 (So interesting to ponder how a calf head, calf tongue, calf brains, and veal and beef somehow turn into turtle soup. Ten hard-boiled eggs! It must be magic. Also you gotta love "will keep indefinitely," and LOL that's how long it would last here at our Covid-19 homestead.) 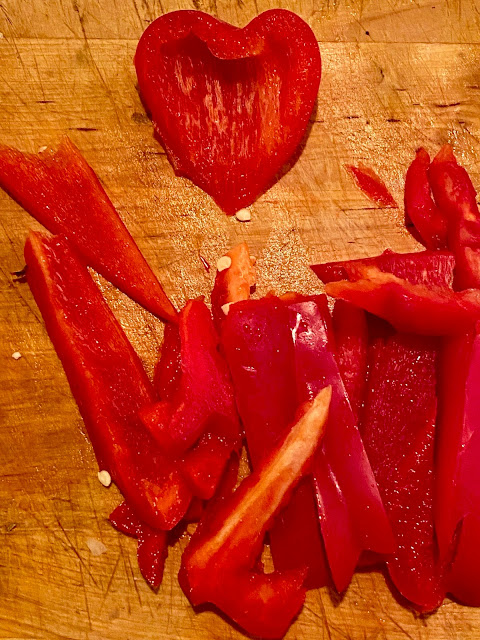 Dusty made a pork tenderloin for Easter
I had to chuckle at the truths embedded in his note: Food has been all over the place recently. We did a whole chicken last night with roasted sweet potatoes and asparagus. I believe we are going to take the shredded meat and make a chicken pot pie tonight. We grilled tenderloin steaks the other night that were delicious.
We just went to the grocery, so possibilities are endless now. I had been surviving off a whole pot of chili and another pot of broccoli chicken soup (one of my mom's recipes). Cleanup is easier, but I can only do so many leftovers. 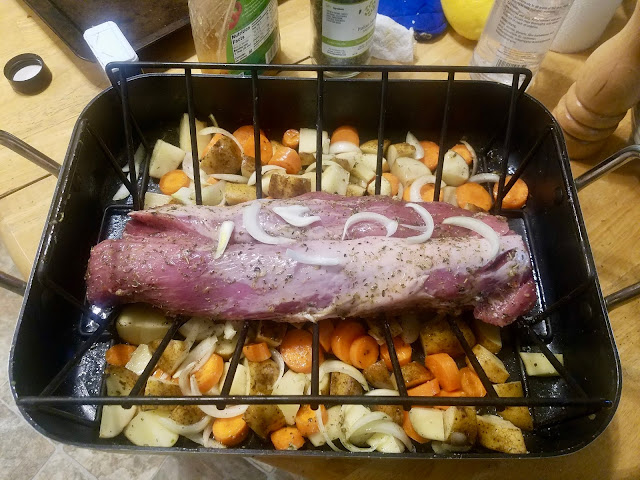 In Quarantine
by Kim Stafford, Oregon's poet laureate
After they sealed the doors and locked
the gate, after they left us mortality estimates,
on a sheet to post in the hall, after they counted
our days of water—by megaphone from outside
the perimeter—and drove away, after our desperate
questions had exhausted all our tears, after we
looked at each other, first with suspicion of contagion,
then with curiosity, and then with love, someone
found a guitar, remembered a song, and we all
got in a line, laughing arm in arm, and danced. 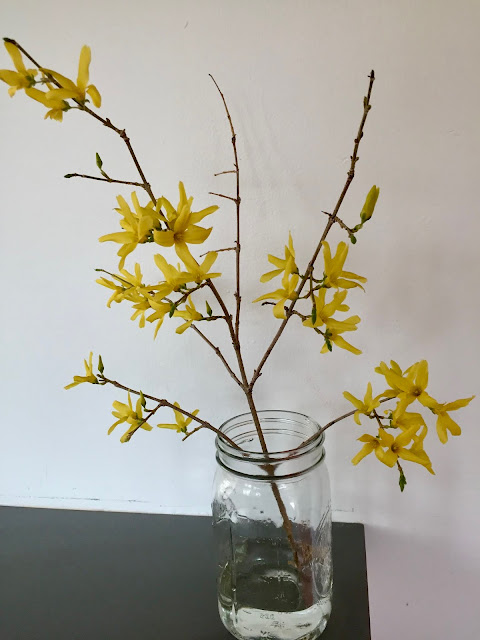