We walked the Waikanae beach yesterday on the Kapiti Coast. When you see this stretch of clear beach you might be as astonished as we were to learn it's just 40 minutes north of Wellington. Kapiti Island is shown on the map off the west coast of Paraparamu (which is also fun to say out loud). 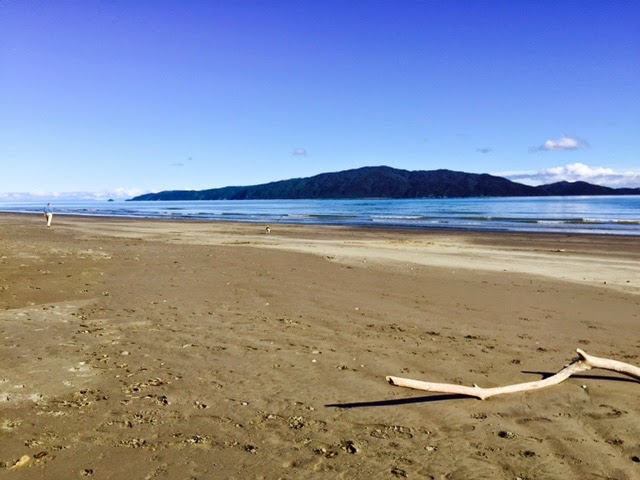 I'm always regretful when I read the history of a place we didn't visit. Kapiti Island's is fraught:

Many tribal groups have left their marks on Kapiti Island during a long and colourful history. For instance, from here the famous chief Te Rauparaha controlled his middle NZ empire between 1830s and 1860s. Over the last 150 years, Kapiti Island has been home to some five waves of particular European interest. First came the explorers, including Captain James Cook who named Kapiti “Entry Island” because of its proximity to Cook Strait.

Then came the foreign trading ships which affected the balance of power: They were encouraged to the Island by signal fires on top of the hills. Soon after came commercial whalers, with some 2000 people living on Kapiti Island, including Australian and American whalers using their ‘long boats’ to chase the whales.They processed the meat in large ‘blubber pots’ (some of which still remain on the Island).

Immigrant farmers during the 1840s and 50s. In 1897 New Zealand’s Prime Minister Richard Seddon introduced a bill to Parliament in order to acquire Kapiti Island ‘to conserve the flora and fauna of the Island’ (as already the diversity and abundance of native species was recognised).

Of the total 1965 hectares, the local tangata whenua (Māori people of the land) together kept 13 hectares around Waiorua Bay, and this is where the Lodge is today. Otherwise (now for over 100 years), Kapiti Island has been managed exclusively as a wildlife sanctuary.

Beach houses dot the low dunes of the mainland beach. 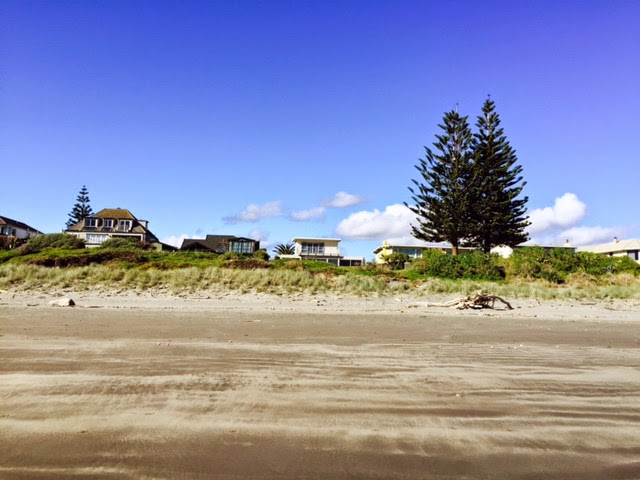 This old soul was using a tractor to pull his motorboat in. 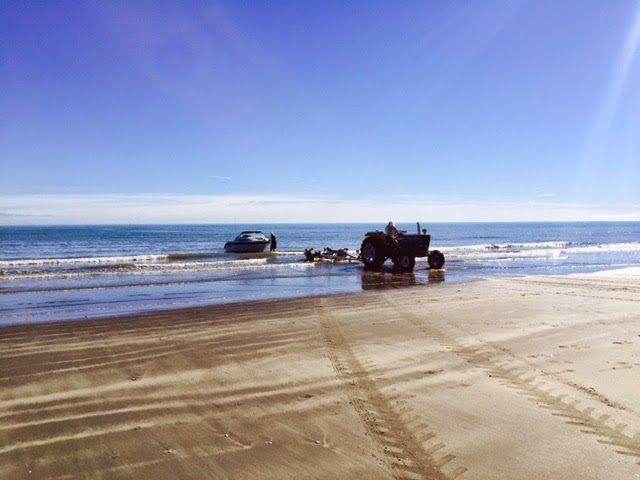 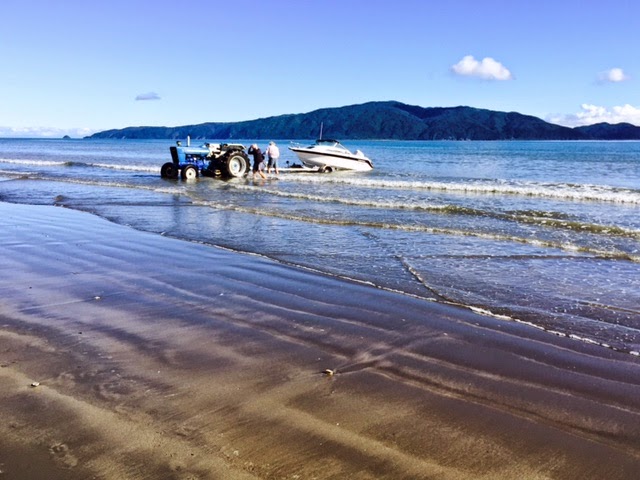 The terrain we've driven through on the central North Island has been bucolic, much of it populated by cows. 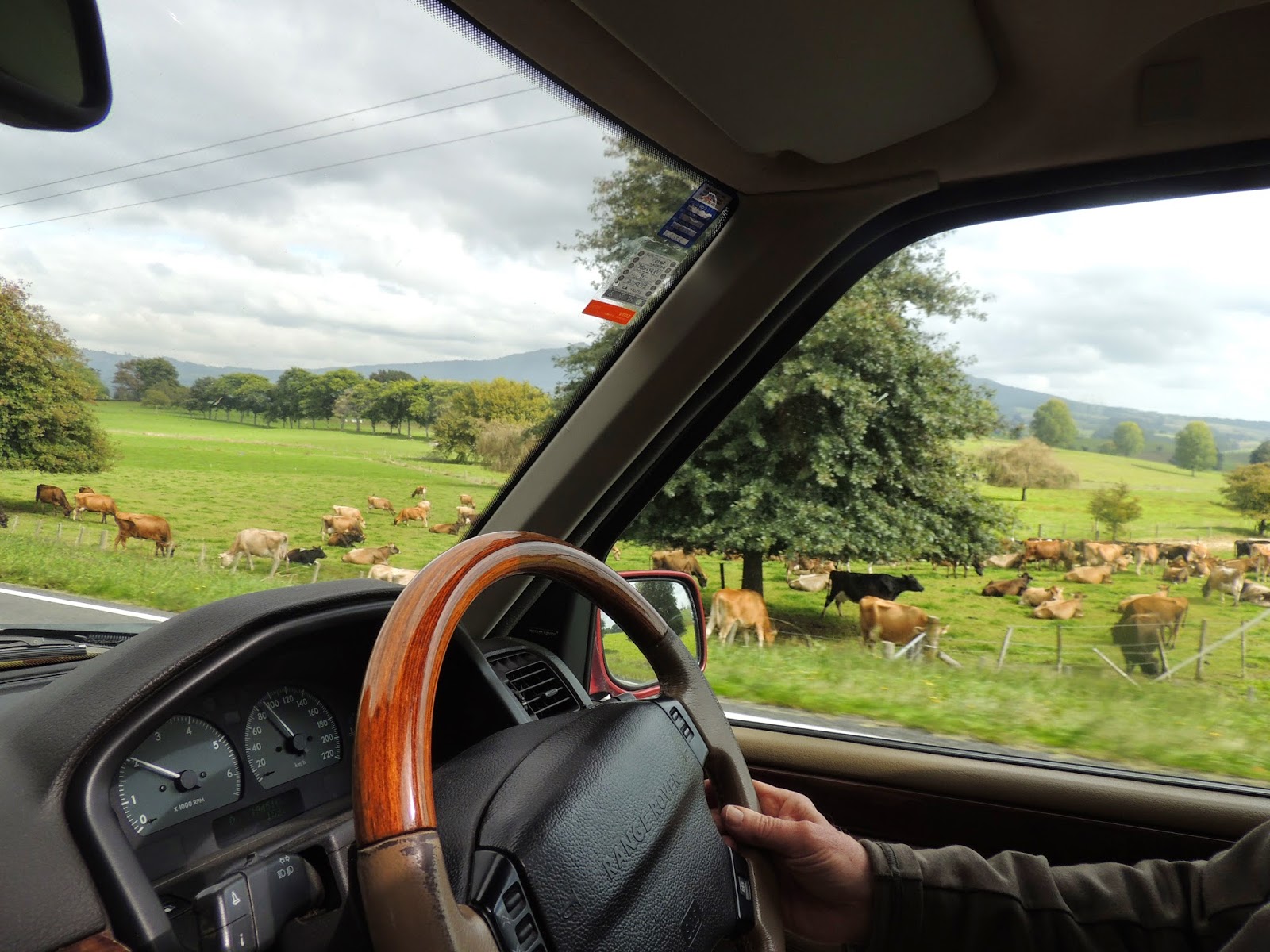 I read a piece in the NZ Herald back in Auckland that might tell why:


New Zealand beef and veal exports reached 212,100 tonnes in the six months, up 12 per cent or 22,600 tonnes on the corresponding period last season. Beef and Lamb said the gain reflected a high and early cattle processing season and strong global demand for beef. "This increase in shipments was mainly due to consistent high monthly volumes exported to the two main markets for New Zealand beef - the US and China - while volumes to other main markets decreased."

Oh there are sheep, and plenty of them. But these Belted Galloways caught my attention on the ride from Hamilton to Mokau, resting happily in their white stoles. 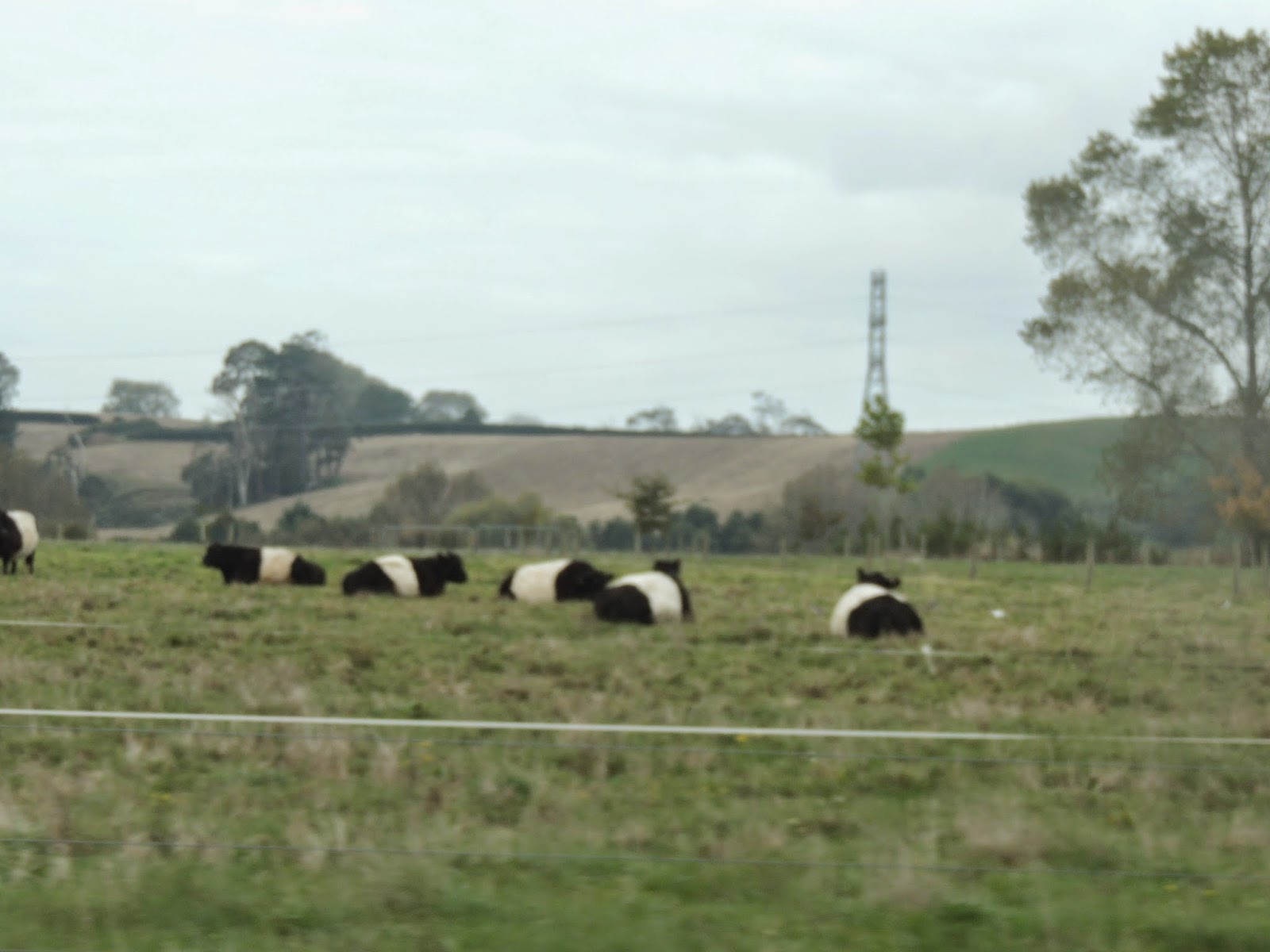 Lest you be misled, it's not all peaceable kingdom. 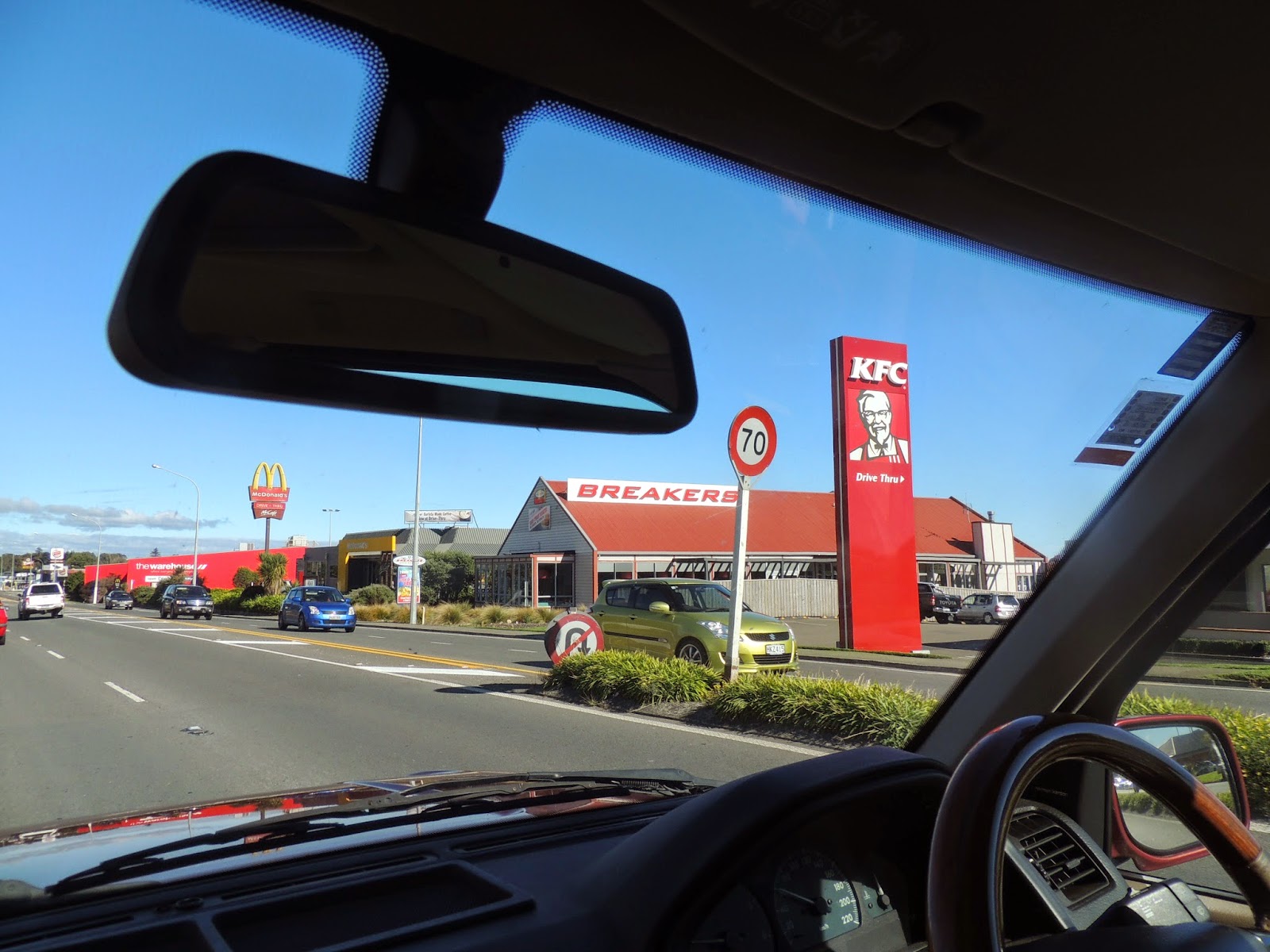 We navigated into Wellington without a hitch, arriving at the ferry terminal a couple hours early, time we hoped to use exploring this capital city.


Wellington (/ˈwɛlɪŋtən/) is the capital city and second most populous urban area of New Zealand, with 393,600 residents.[3] It is located at the south-western tip of the North Island, between Cook Strait and the Rimutaka Range. It is the major population centre of the southern North Island, and is the administrative centre of the Wellington Region, which also includes the Kapiti Coast and Wairarapa. Wellington is the world's southernmost capital city of a sovereign state.

Lining up in Lane 3 for the ferry reminded us of being in the Pacific Northwest. Lock your car, leave it, and go for a coffee. 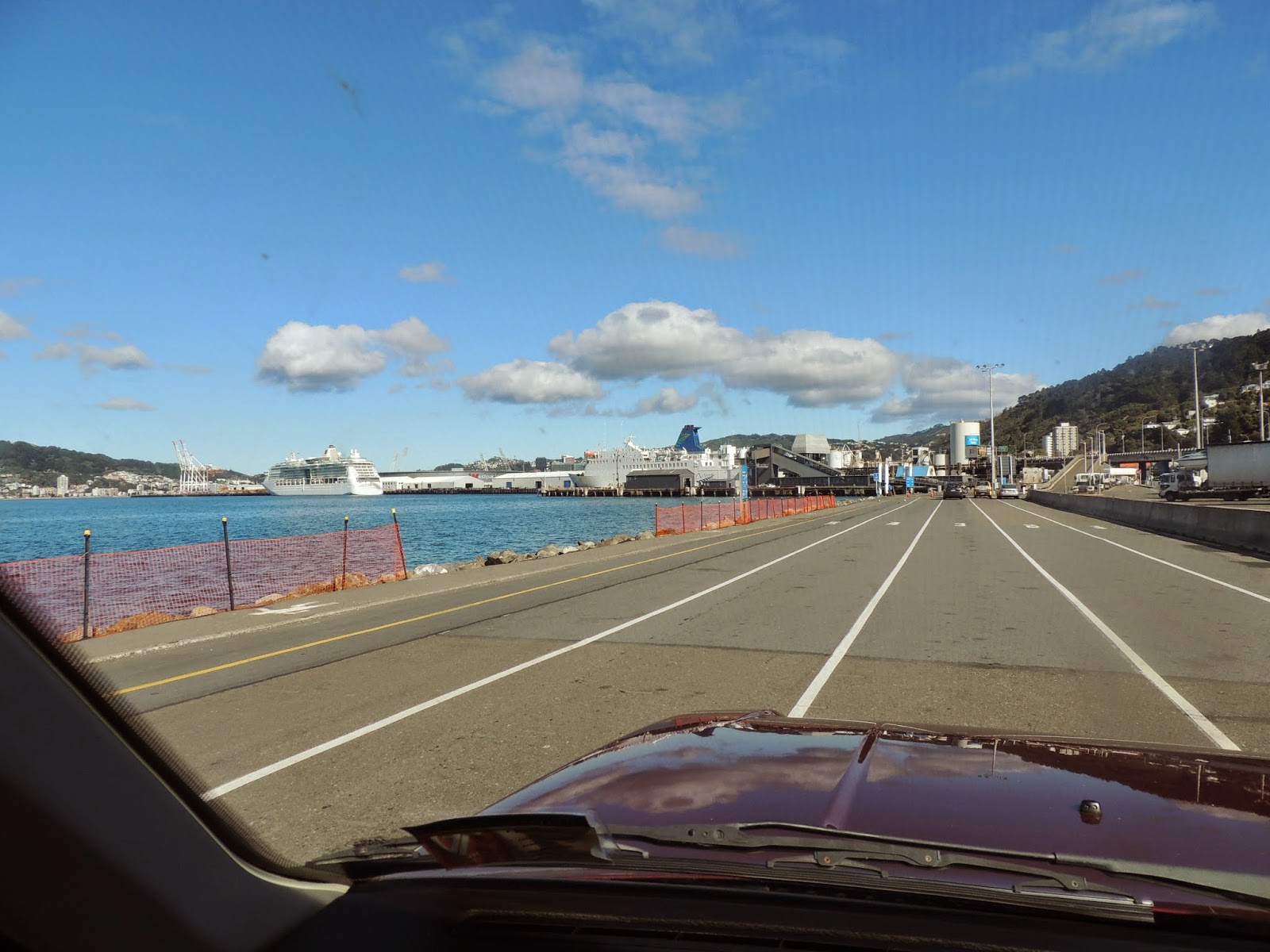 We were told by the housekeeping woman at our motel Friday morning that we'd chosen a good day to head to the ferry. Saturday was Anzac Day, a three-day national holiday, and Wellington would be crowded. 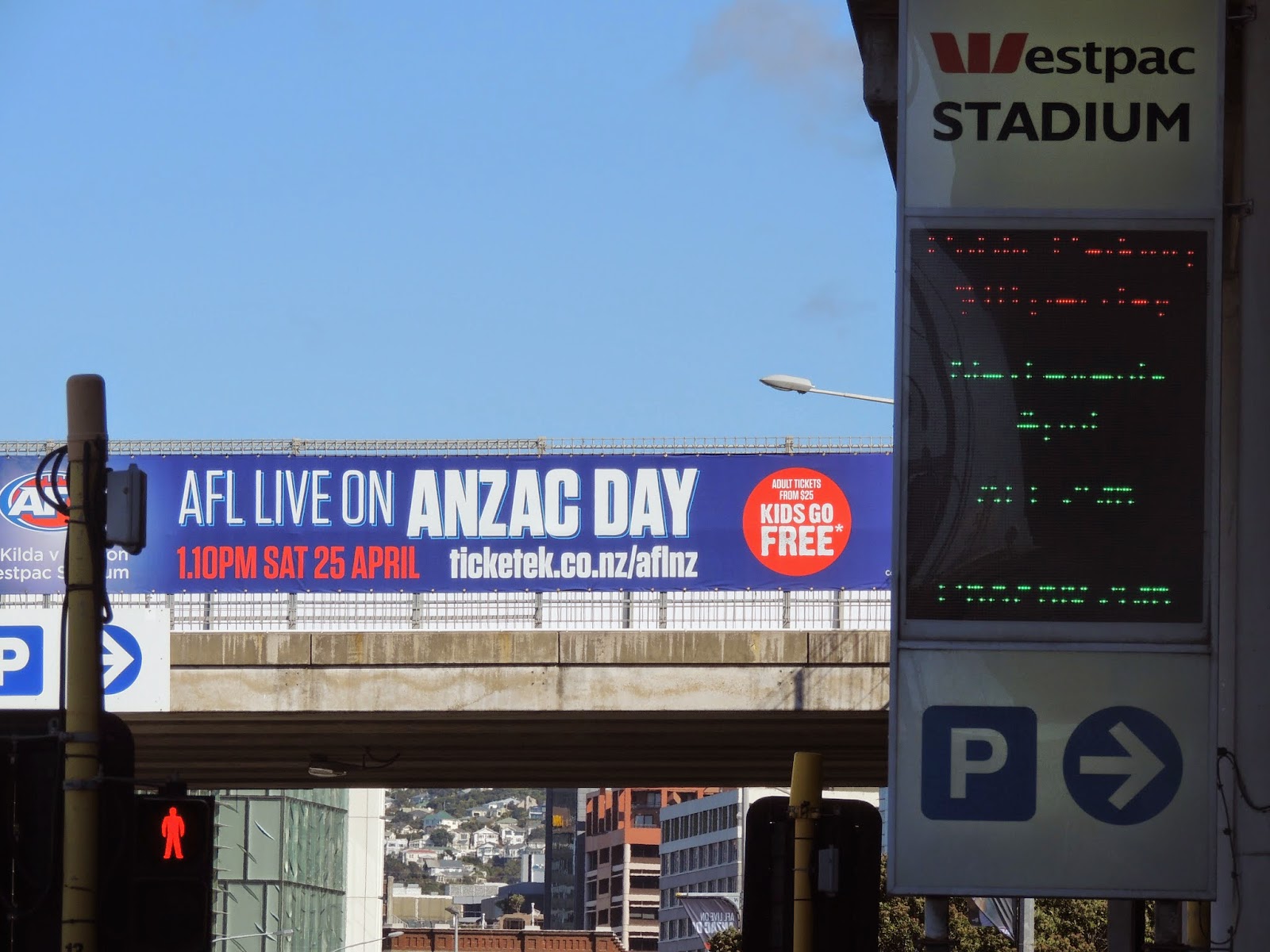 Anzac Day /ˈænzæk/ is a national day of remembrance in Australia and New Zealand that broadly commemorates all Australians and New Zealanders "who served and died in all wars, conflicts, and peacekeeping operations" and "the contribution and suffering of all those who have served."[1][2] Observed on 25 April each year, Anzac Day was originally to honour the members of the Australian and New Zealand Army Corps (ANZAC) who fought at Gallipoli against the Ottoman Empire during World War I.

Another stunning autumn afternoon, with temperatures in the mid-70s, brought workers out to the Wellington waterfront for lunch. 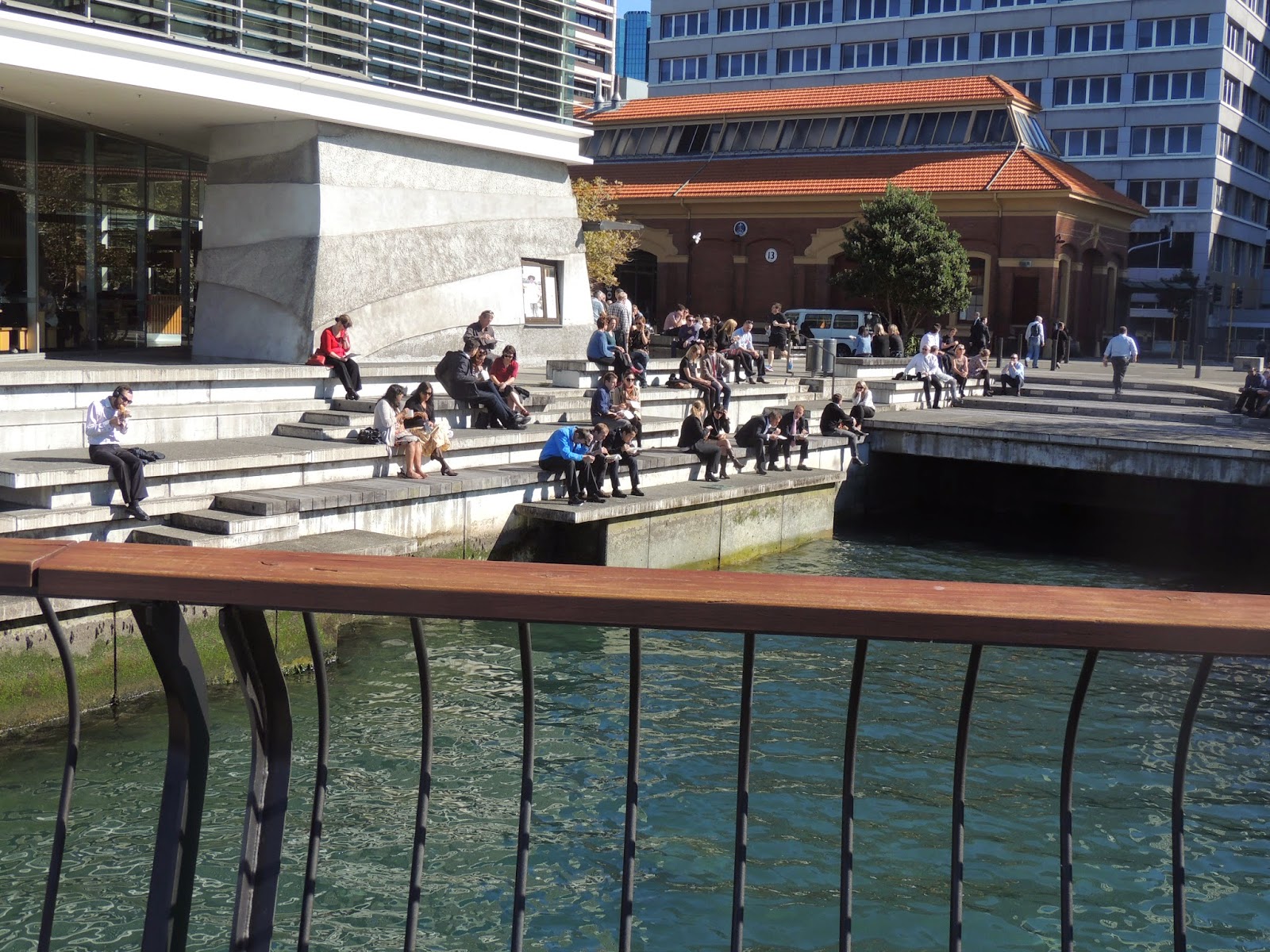 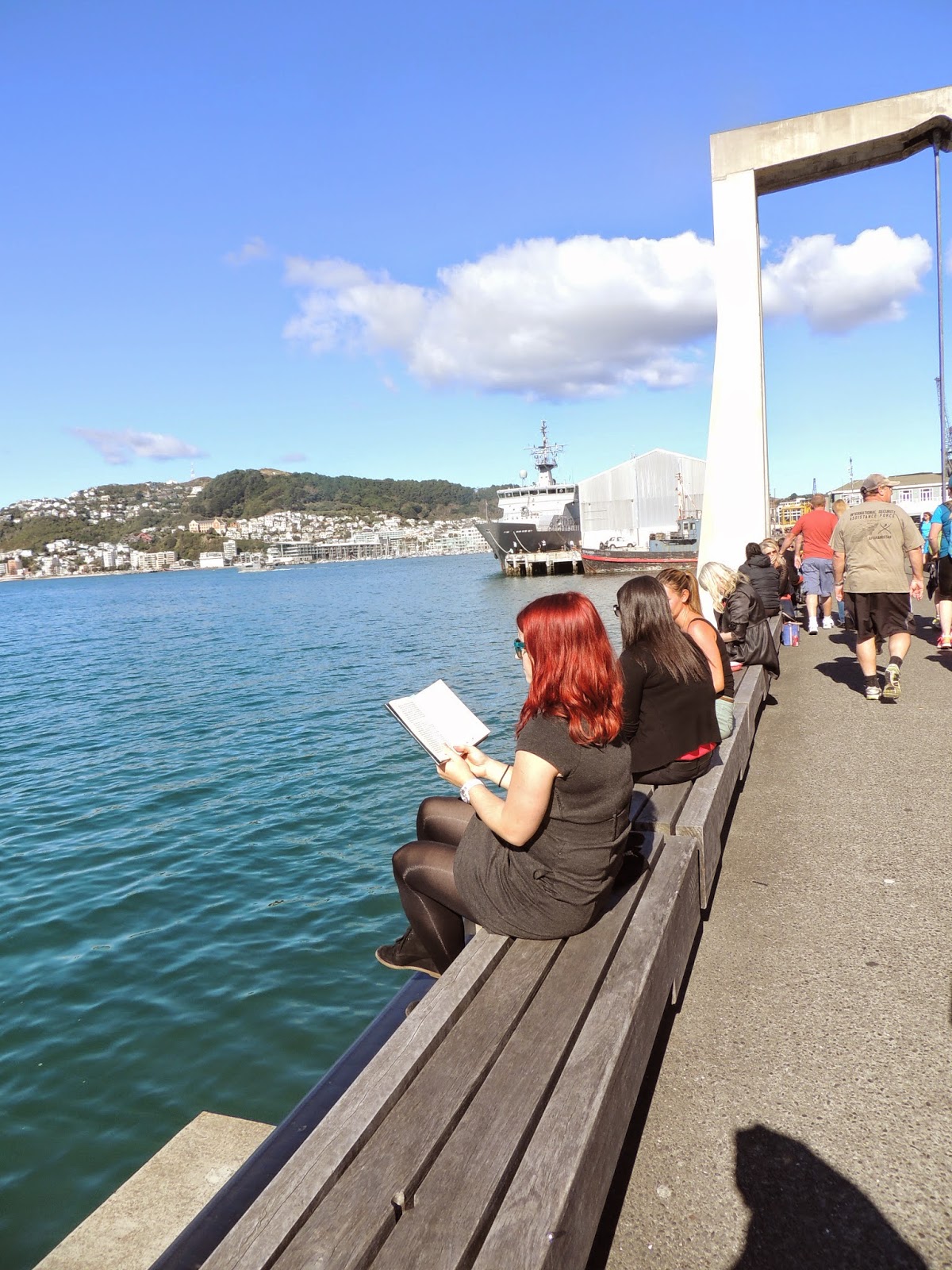 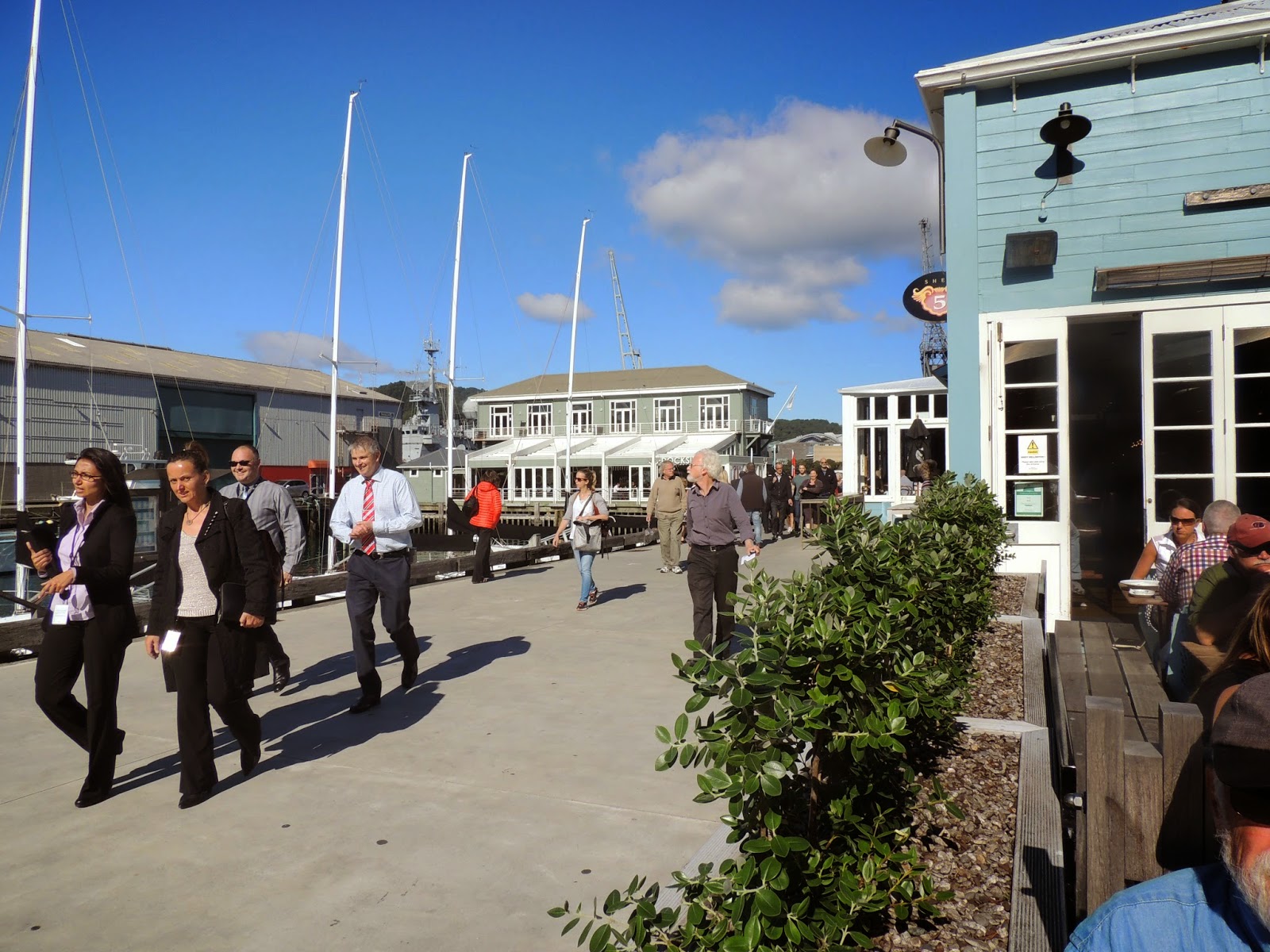 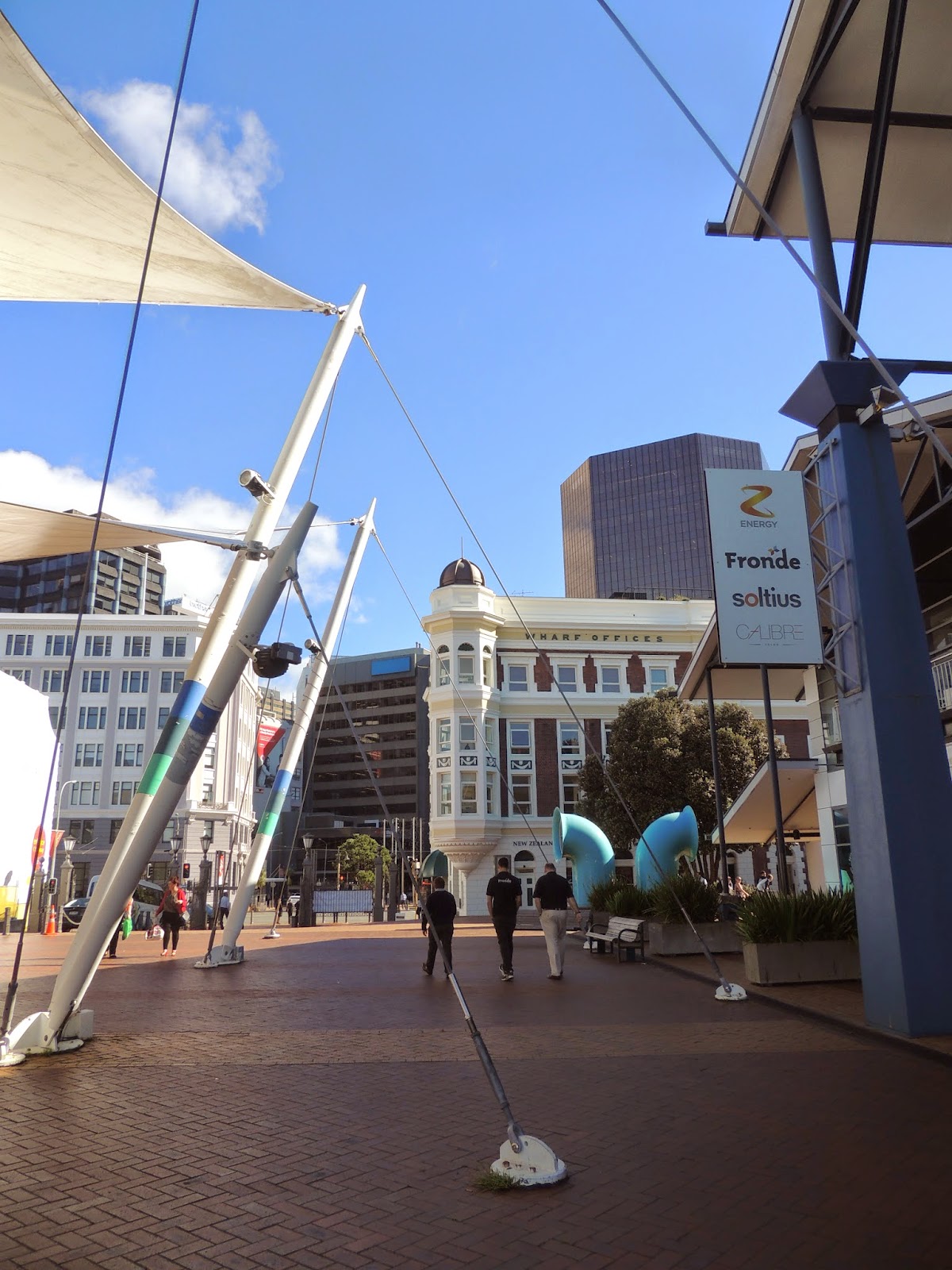 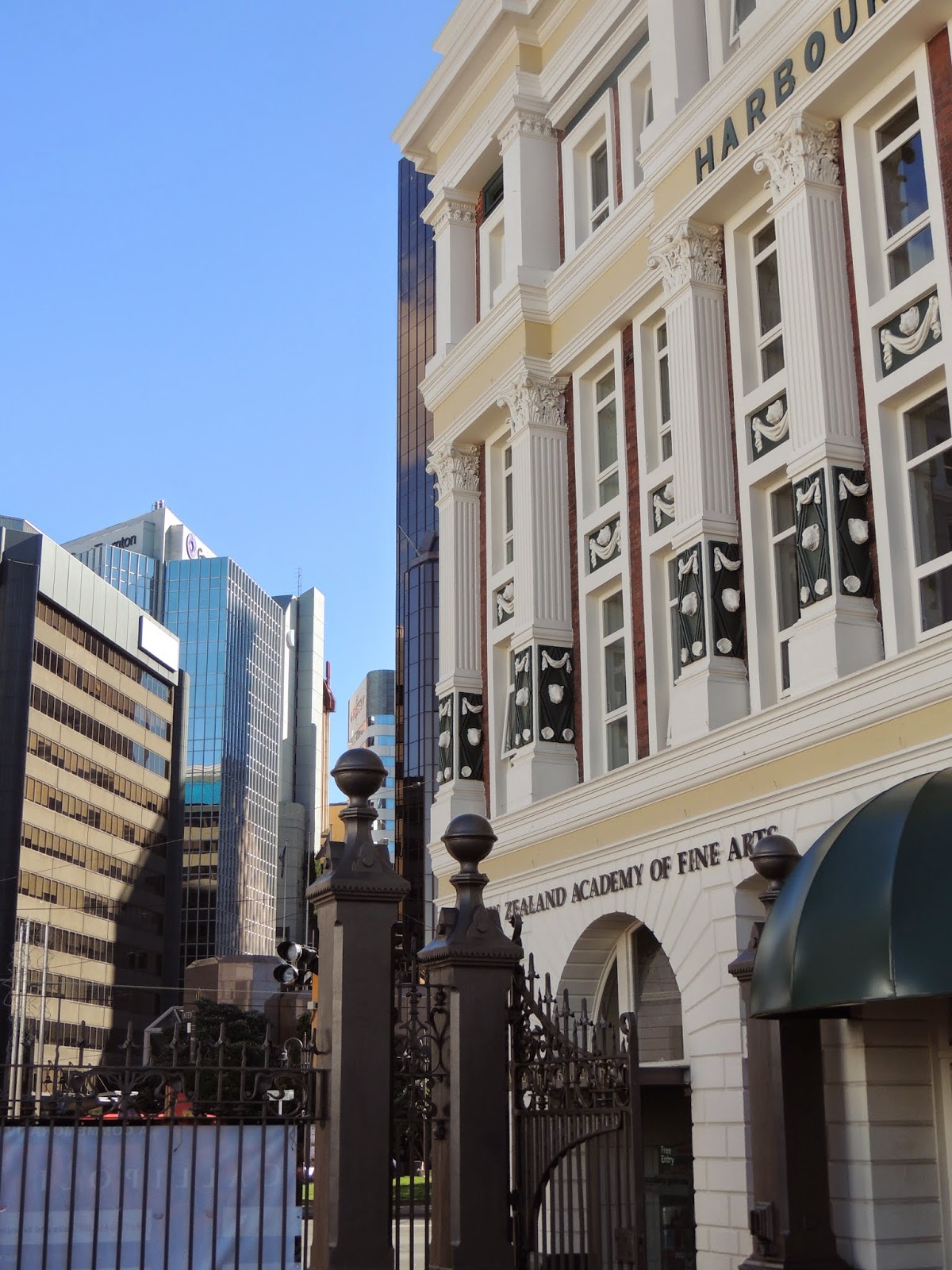 Too little time in Wellington before we headed back for the Interislander crossing.

between Wellington and Picton takes only 3 hours and has been described as "one of the most beautiful ferry rides in the world". Interislander's 3 vessels give you a wide choice of sailings. Passengers can walk on or take a vehicle. Take a virtual tour here. We look forward to meeting you onboard!

And I am low on bandwidth where we're staying, in the famed Marlborough vineyard region. I'm sitting in the sun and before me lie rows and rows--acres and acres!--of Sauvingon Blanc vines.

Just a few pix of the ferry ride, which was calm and relaxing, with fantastic views of the
Queen Charlotte Sound as we neared our South Island destination, Picton.

Bar area on the Interislander, rugby on TV 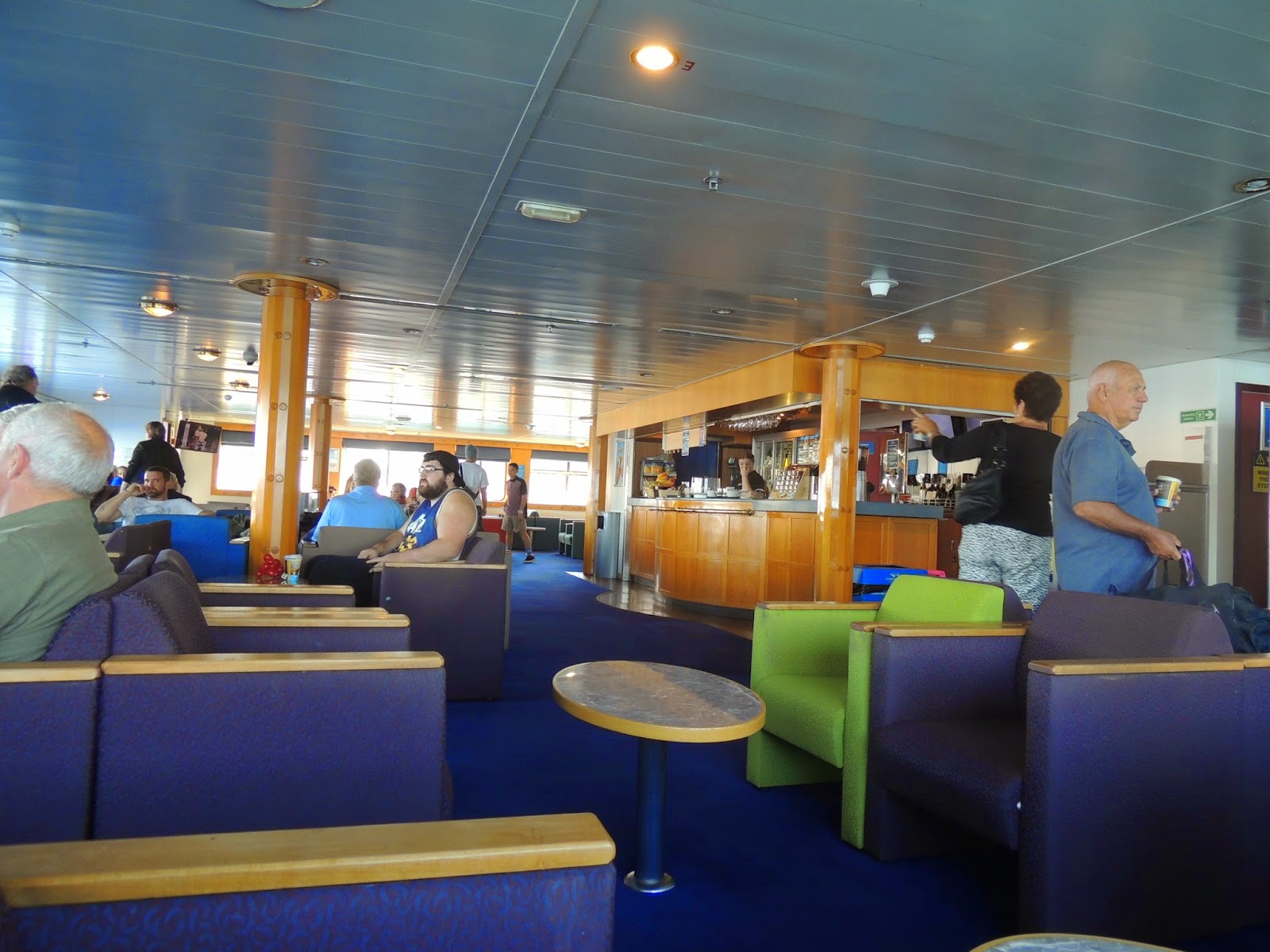 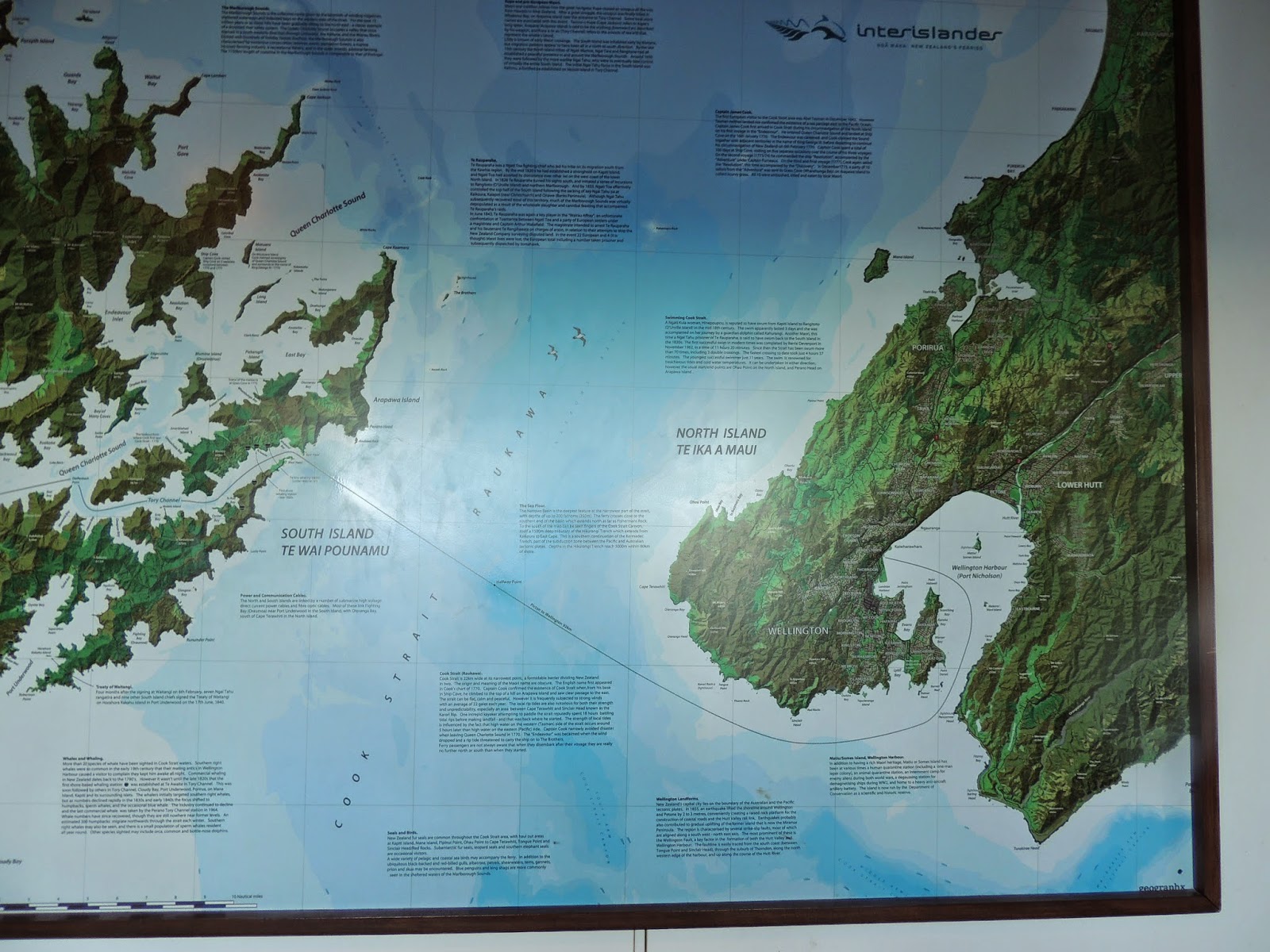 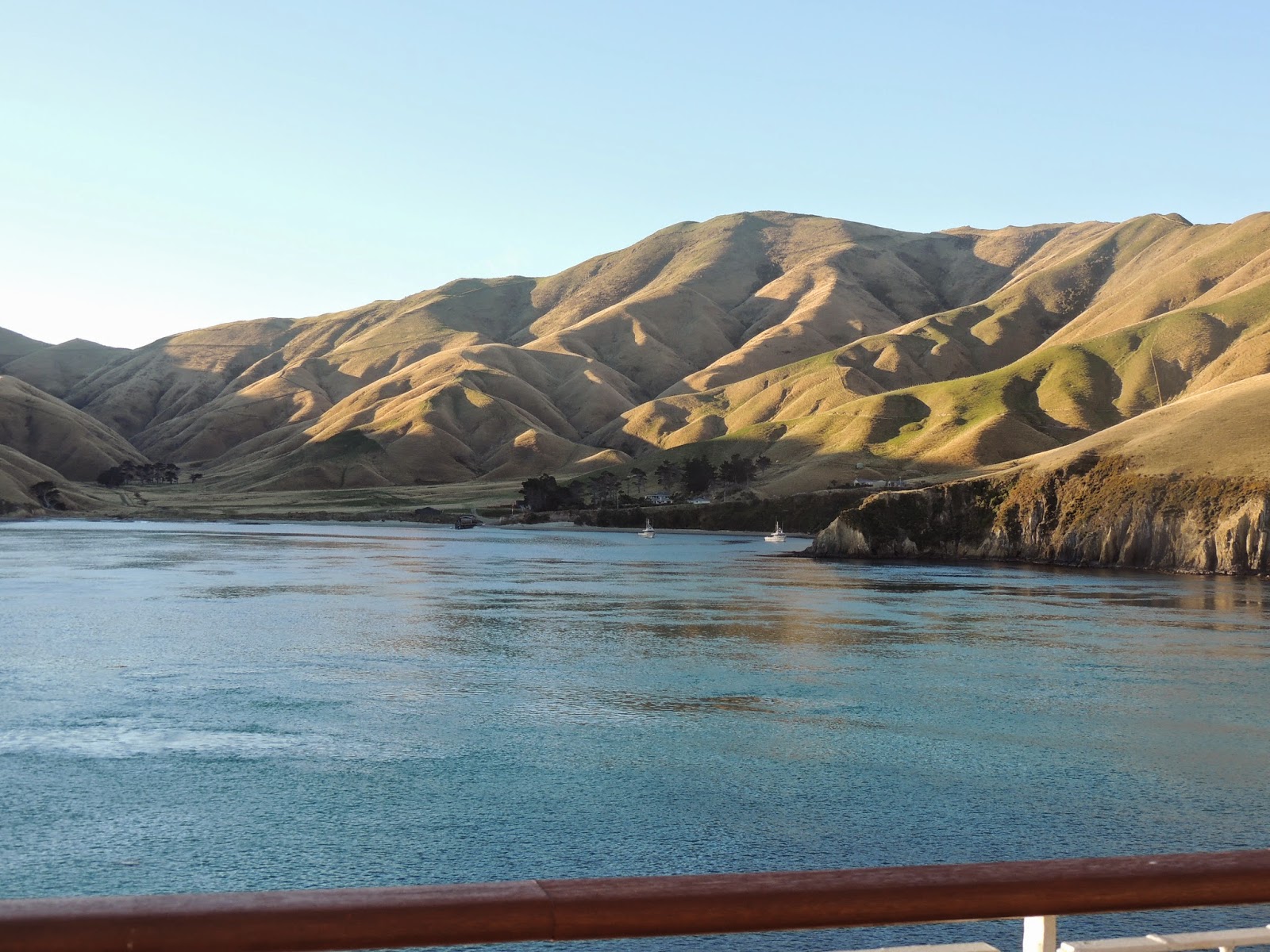 Me making pictures on deck, shirt blowing mightily in the breeze. 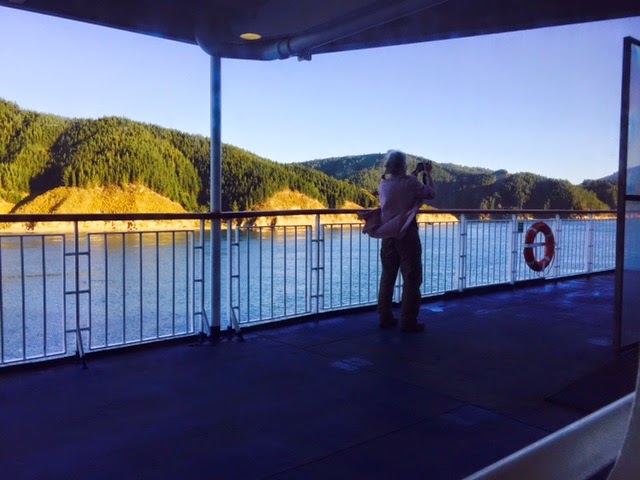