A Horsey Afternoon In Glenorchy

Holly and I are posting today about our big-fun horse ride with Dart Stables in Glenorchy. Like other parts of the family trip, the ride to our destination (about 40 minutes north of Queenstown) was jaw-droppingly beautiful. According to my research,  it's known as one of the top eight scenic drives in the world. 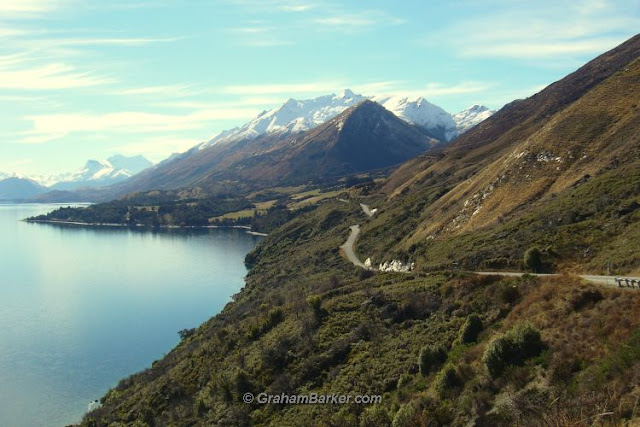 A map showing the drive along the east side of the north arm of Lake Wakatipu.

And some out-the-bus pix we shot on the road north. 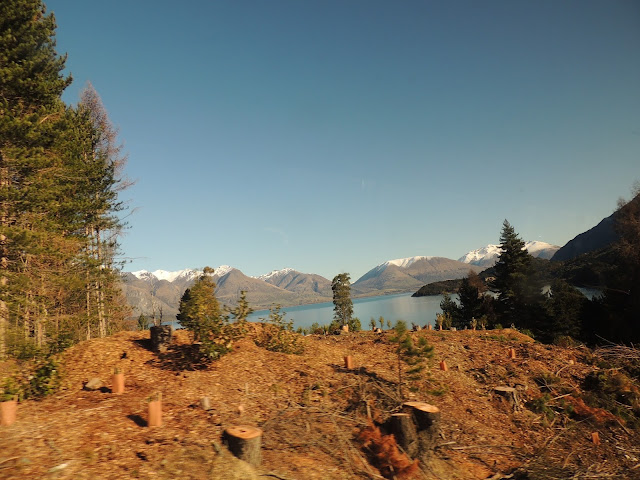 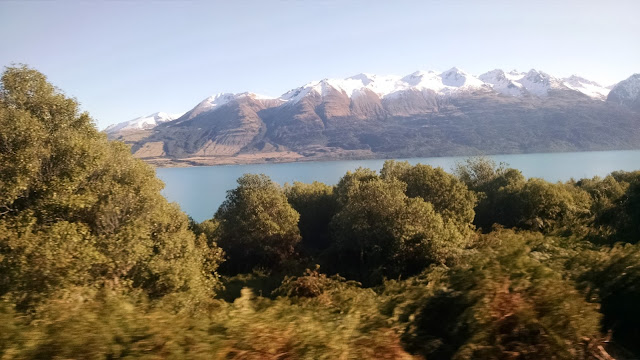 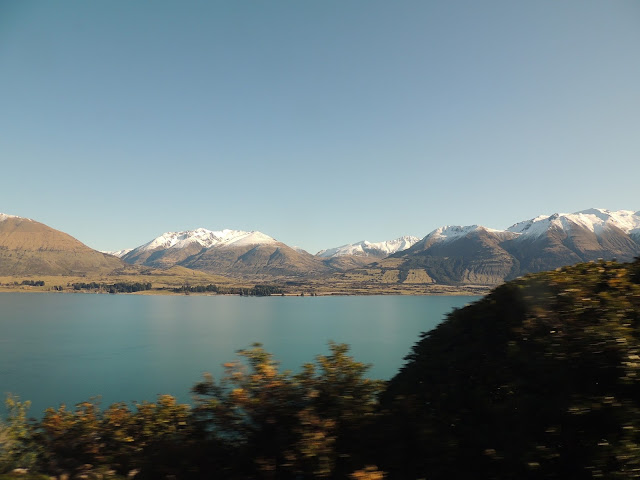 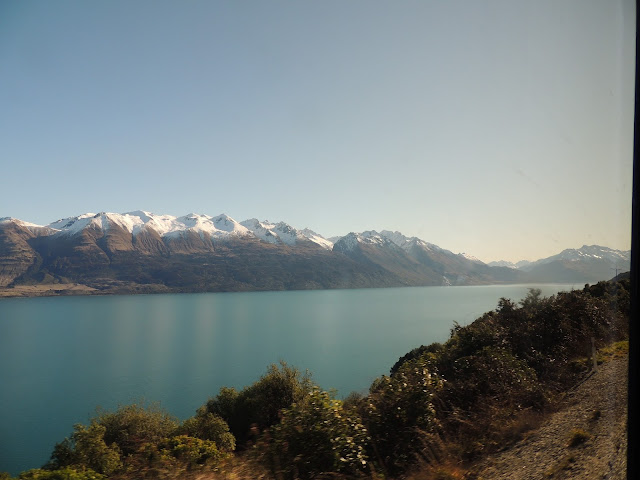 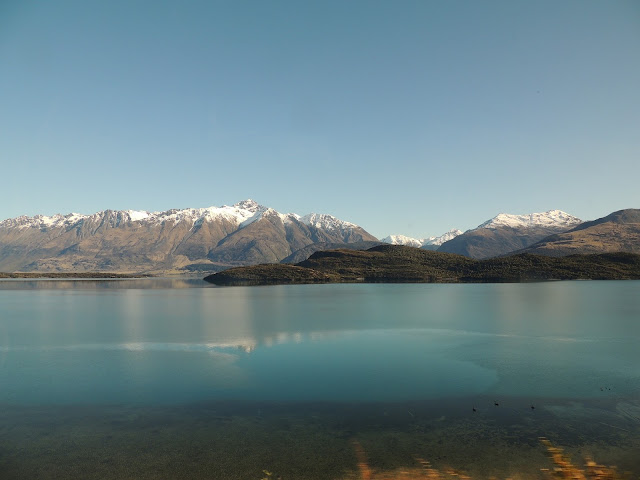 Gearing up. Dart Stables, which ran an excellent operation, provides helmets, rubber boots (it was muddy walking in the paddock when we got off the horses), and oilskin coats (I kept my own coat on). 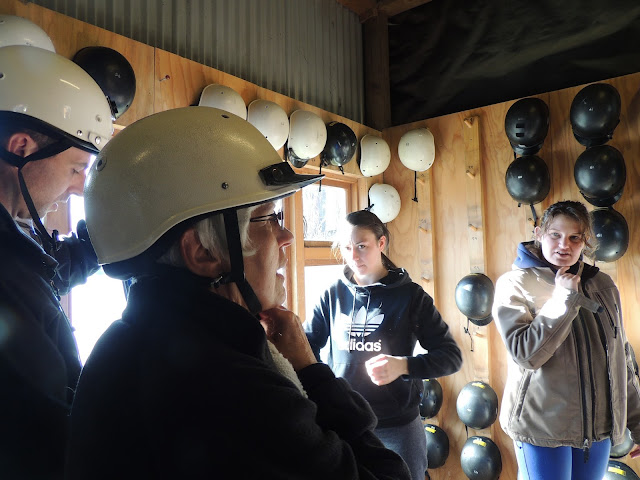 Though I'm sort of sorry I did. Holly's got that official rider look going on. 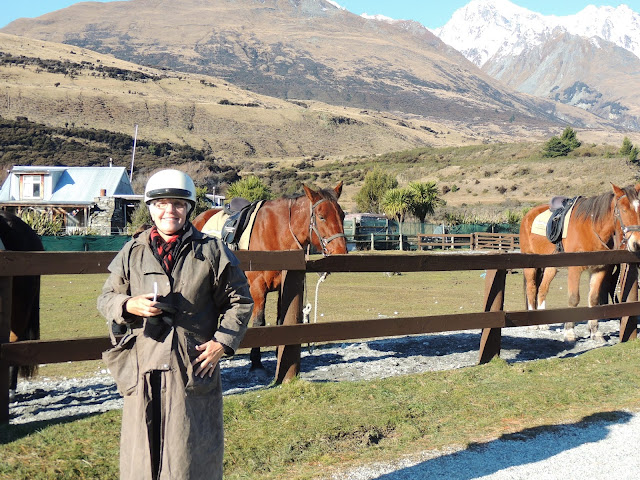 The horses await, assigned to us based on our previous riding experience. I scanned the line-up, wondering to myself why white horses always interested me the least. 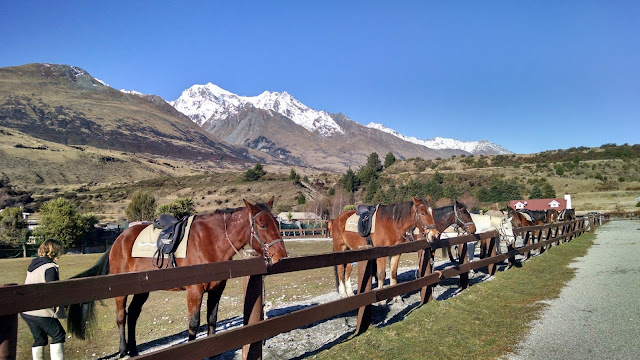 Coincidence or destiny? My horse Sterling, who preferred to have every last millimeter of the reins free. If I lifted so much as half an inch, he'd throw his head back in disagreement. I relinquished control right about then and gave him all he wanted. 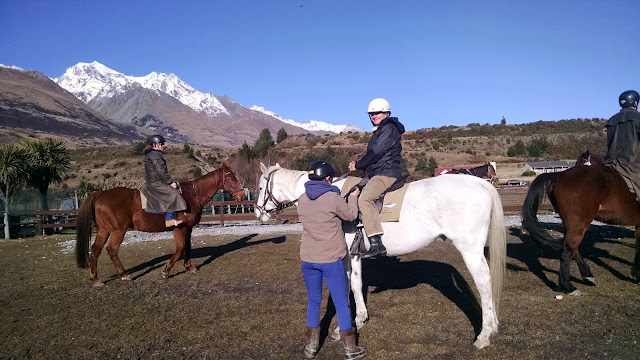 We took the River Wild tour, a two-hour walk (and occasional trot) through magnificent landscape. There's Sterling, fully in charge as we prepare to cross the river. 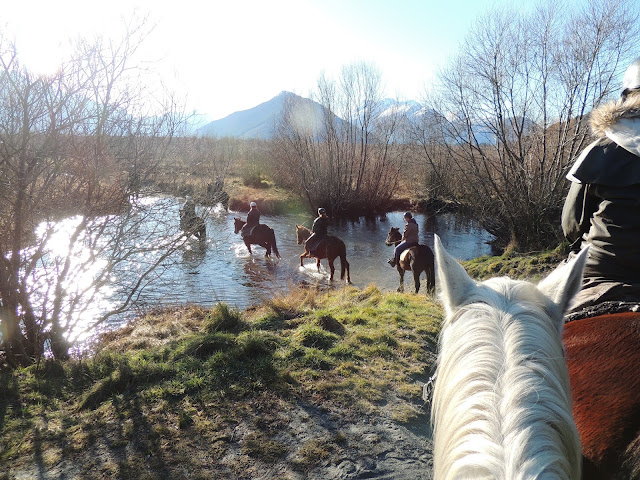 Holly thought it was challenging to go through streams and rivers because it felt like the horse was sinking in. I was more troubled by Sterling tripping three times on dry land because it felt like he was trying to throw me off. Our helpful guide disabused me of the notion. 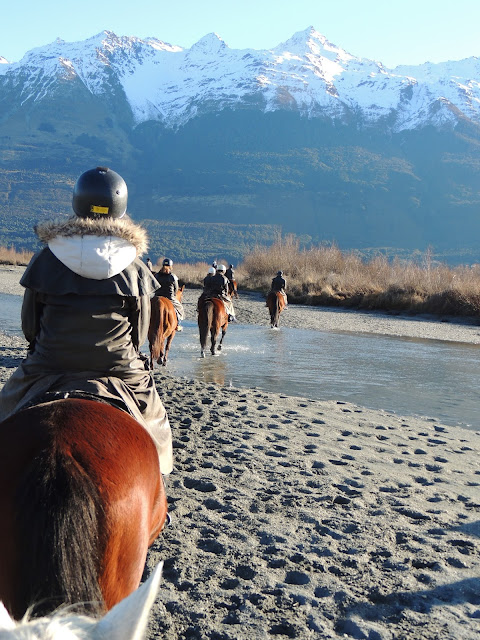 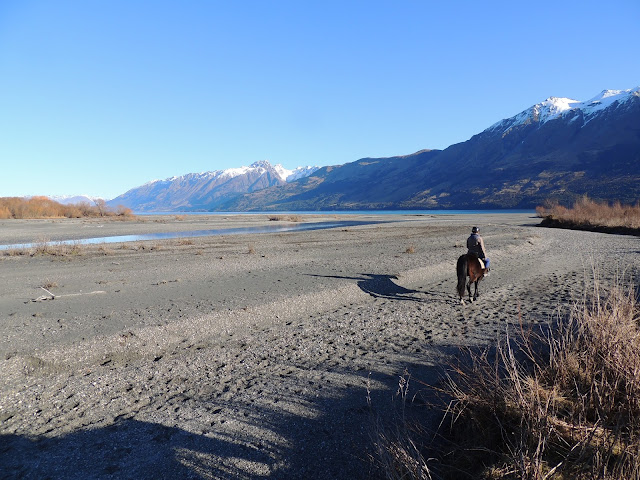 Every so often I'd twist around to try for a shot of Holly behind me. She's on the fastest horse but last in line. 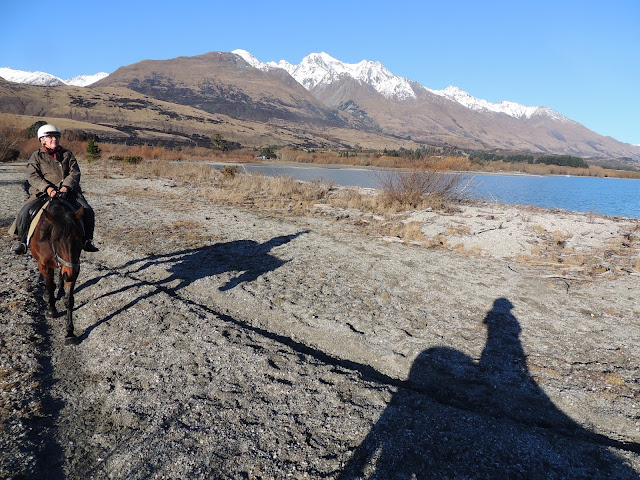 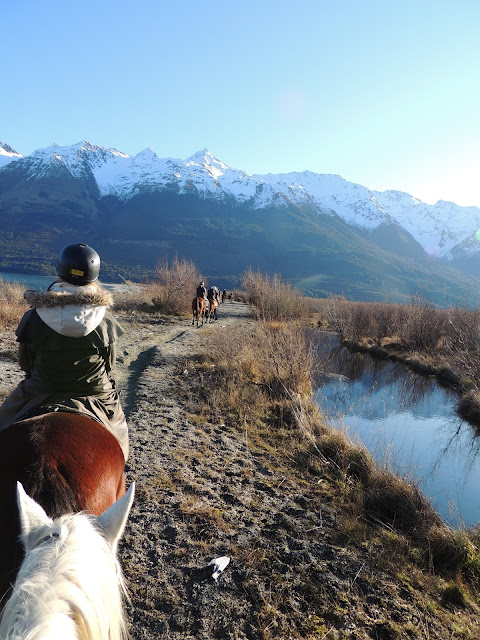 The horses took us to remote landscapes that were utterly quiet and peaceful. The guides told some memorable stories. One of the horses in our group, Trevor, appeared in one of the Lord of The Rings Trilogy films.

Here's why: the production team had imported a bunch of very large horses from Australia for one particular scene in which the lot of them would stampede across a river. 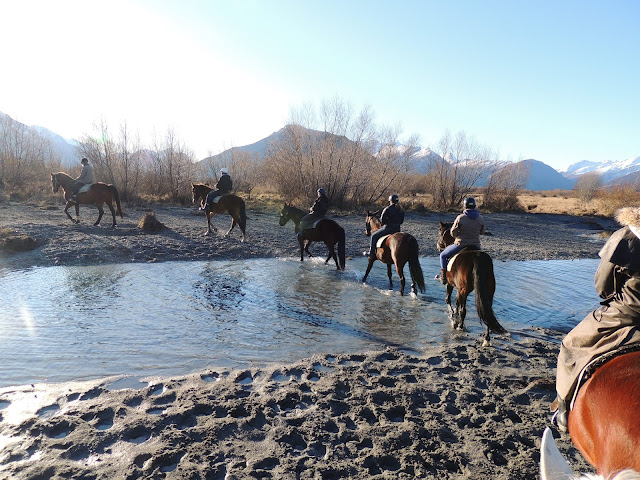 But the Australian horses, accustomed to the heat of their home country, found the rivers cold and would stop dead in their tracks before crossing. The film crew called Dart Stables for help in the form of Trevor, fearless river-crosser. They put him in front, said go, and the others followed. Our guide told us there's a frame and a half in the film where Trevor, a far smaller horse, can be seen leading the larger pack across the water. 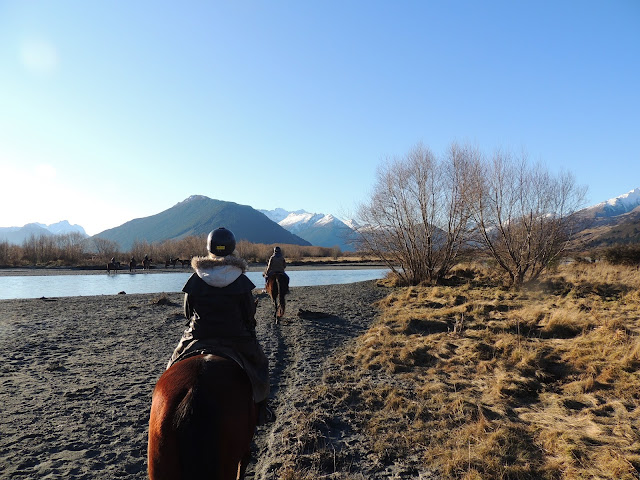 We pause so our friendly guide (there are three for our group) can make portraits. I feel like Barney Fife, my helmet drooping over my eyes as I sit on Sterling, a small horse. Holly, on the other hand, looks like a Chicago cop on horse patrol. Is it the coat or her bad attitude? 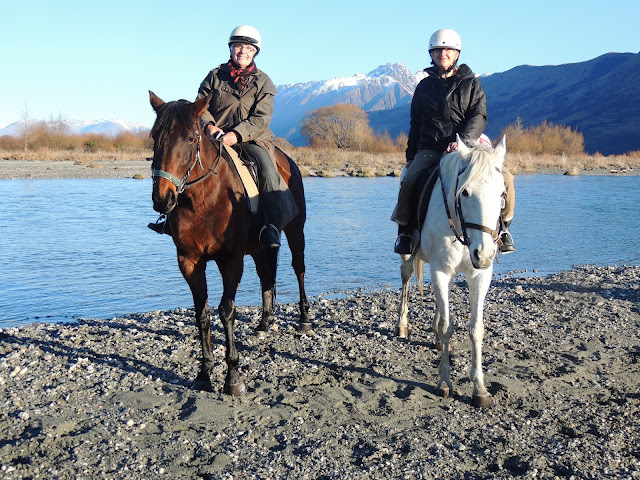 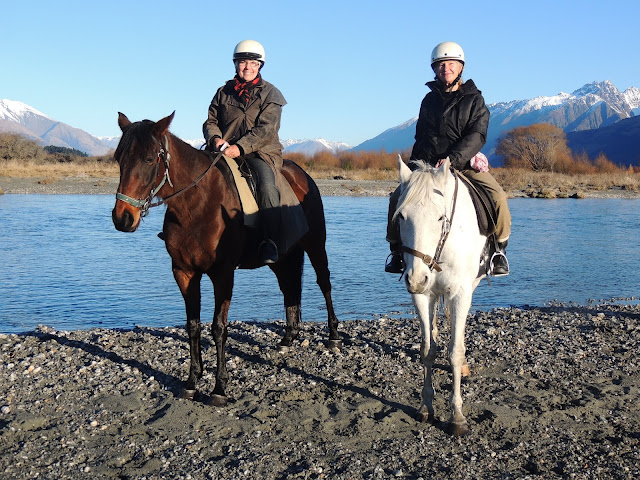 My too-large helmet featured in what might have been a video keeper if anyone had been filming. Our guide asked us if we wanted to try trotting and we agreed, so she walked us through proper form, which involved grabbing a big bunch of horse mane with the same hand holding the reins.

Then she started the horses in a trot. Immediately my helmet slipped down over my eyes, blinding me, and my necklaced Nikon with every step banged me in the chin. "Stand up! Bum back! Lean forward!" our guide called out. I nearly fell off the horse I was laughing so hard. 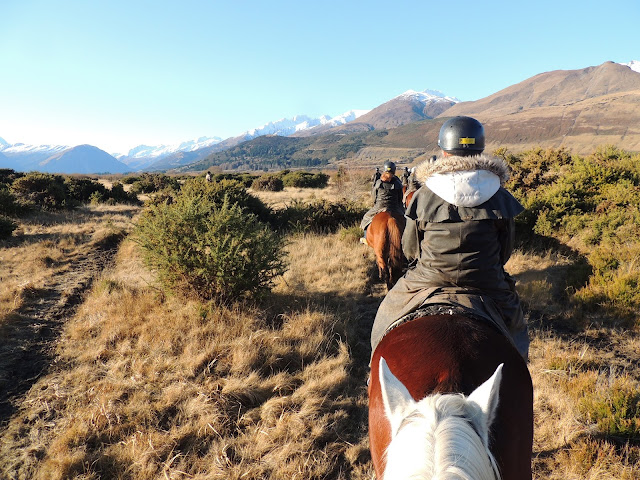 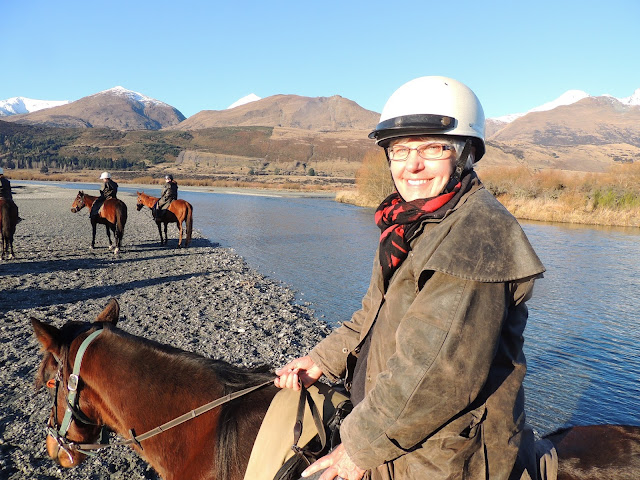 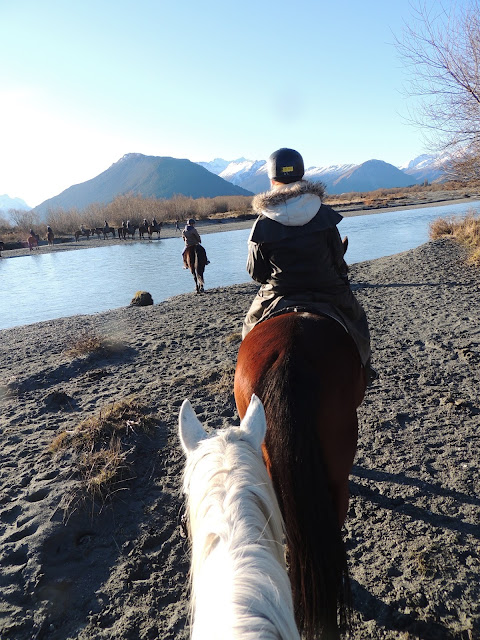 A day that will live in memory. 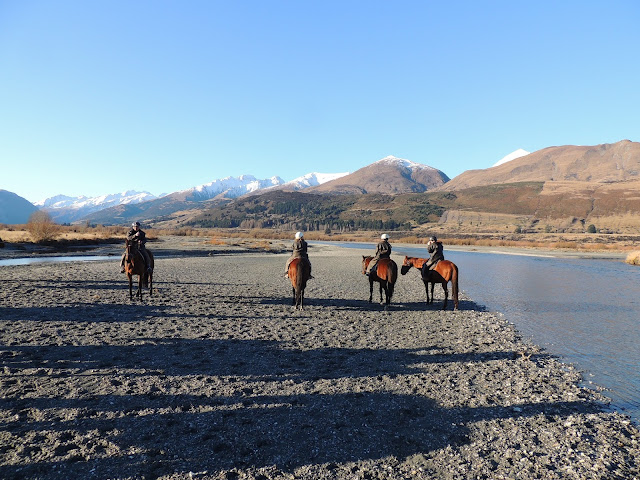